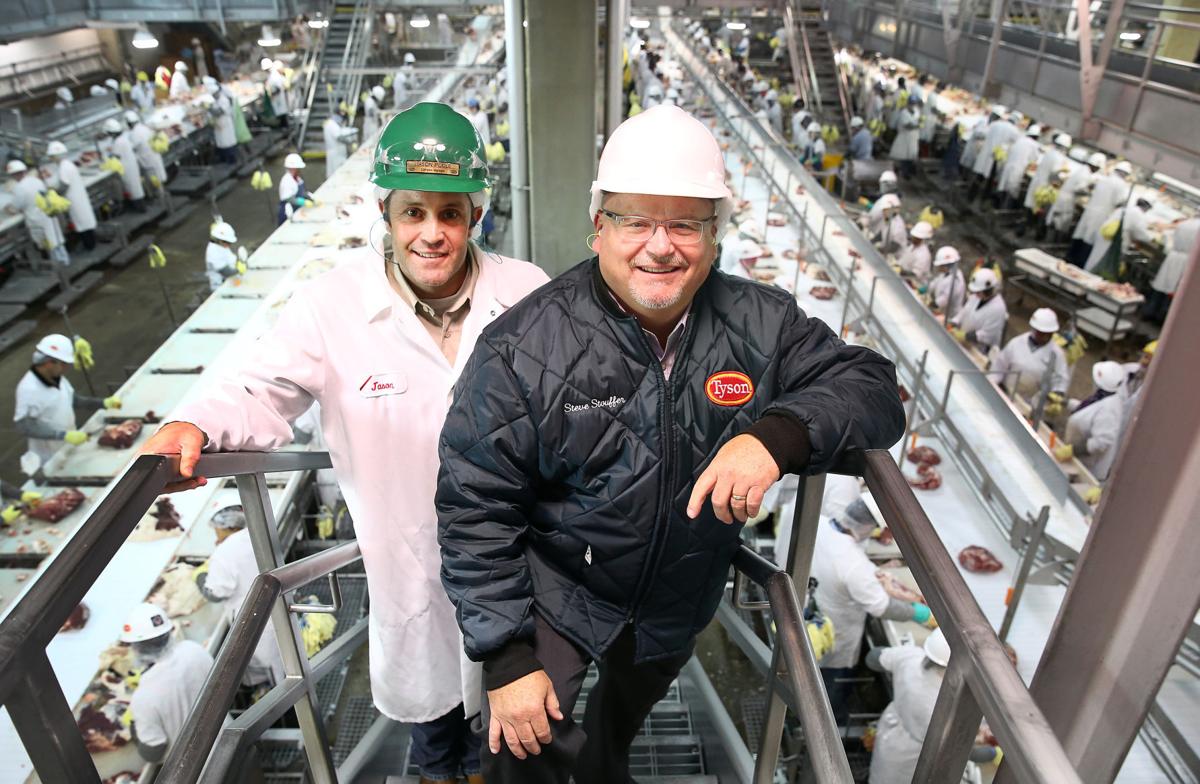 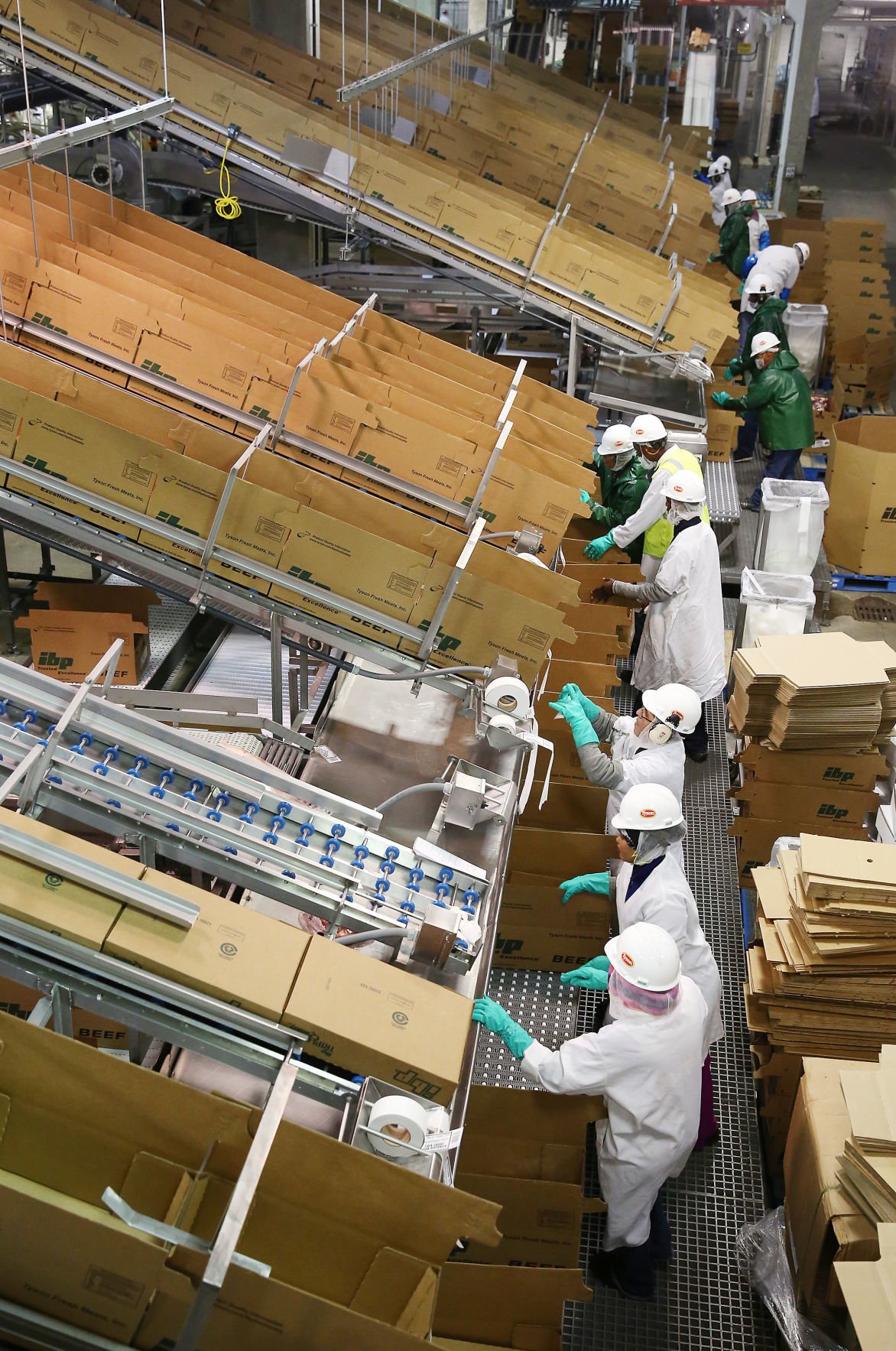 PETA has asked Dakota County Sheriff Chris Kleinberg to investigate an allegation of the inhumane death of a cow at the Tyson Fresh Meats plant, shown above, in Dakota City. The meatpacker has received a notice of intended enforcement from the U.S. Department of Agriculture's Food Safety and Inspection Service. 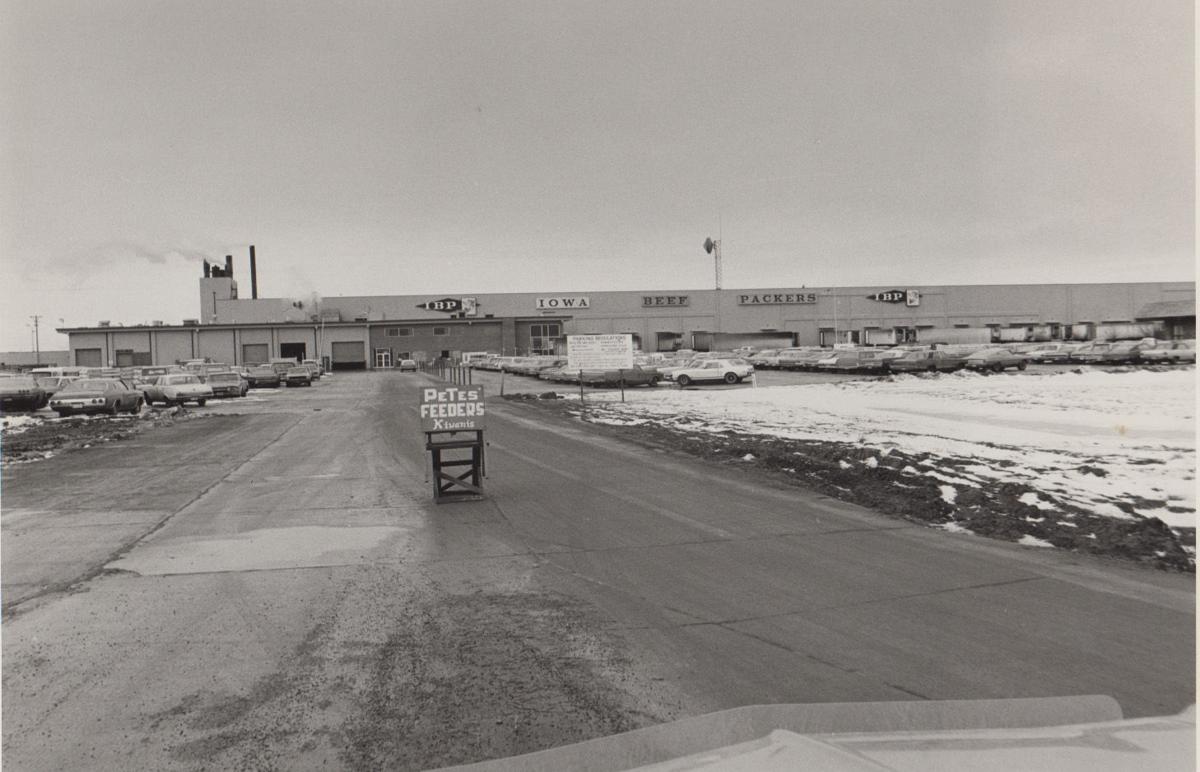 The Iowa Beef Packers plant as it appeared in 1966. After several name changes, the last to IBP, the company was bought by Tyson Foods in 2001. 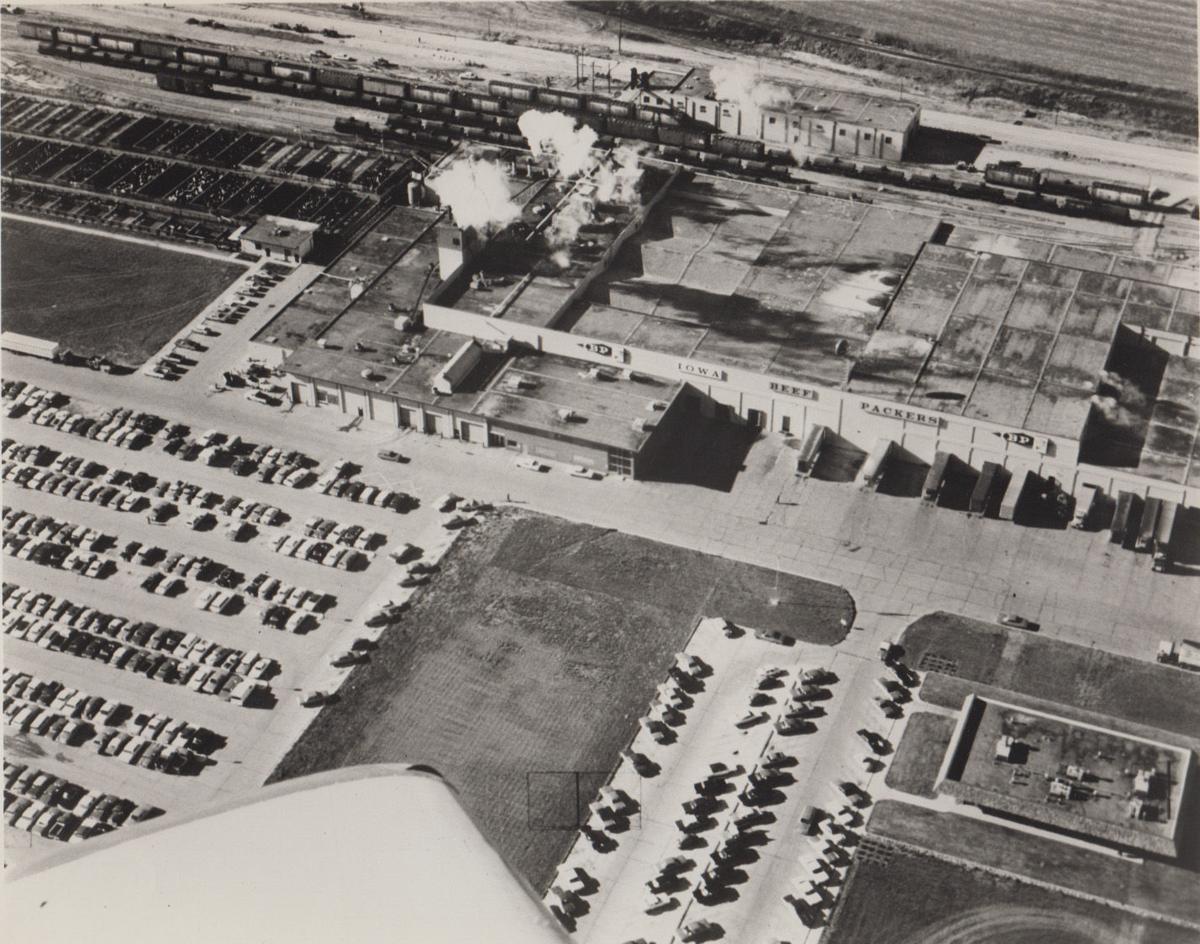 An aerial view of the Iowa Beef Packers plant in Dakota City is shown in 1966. 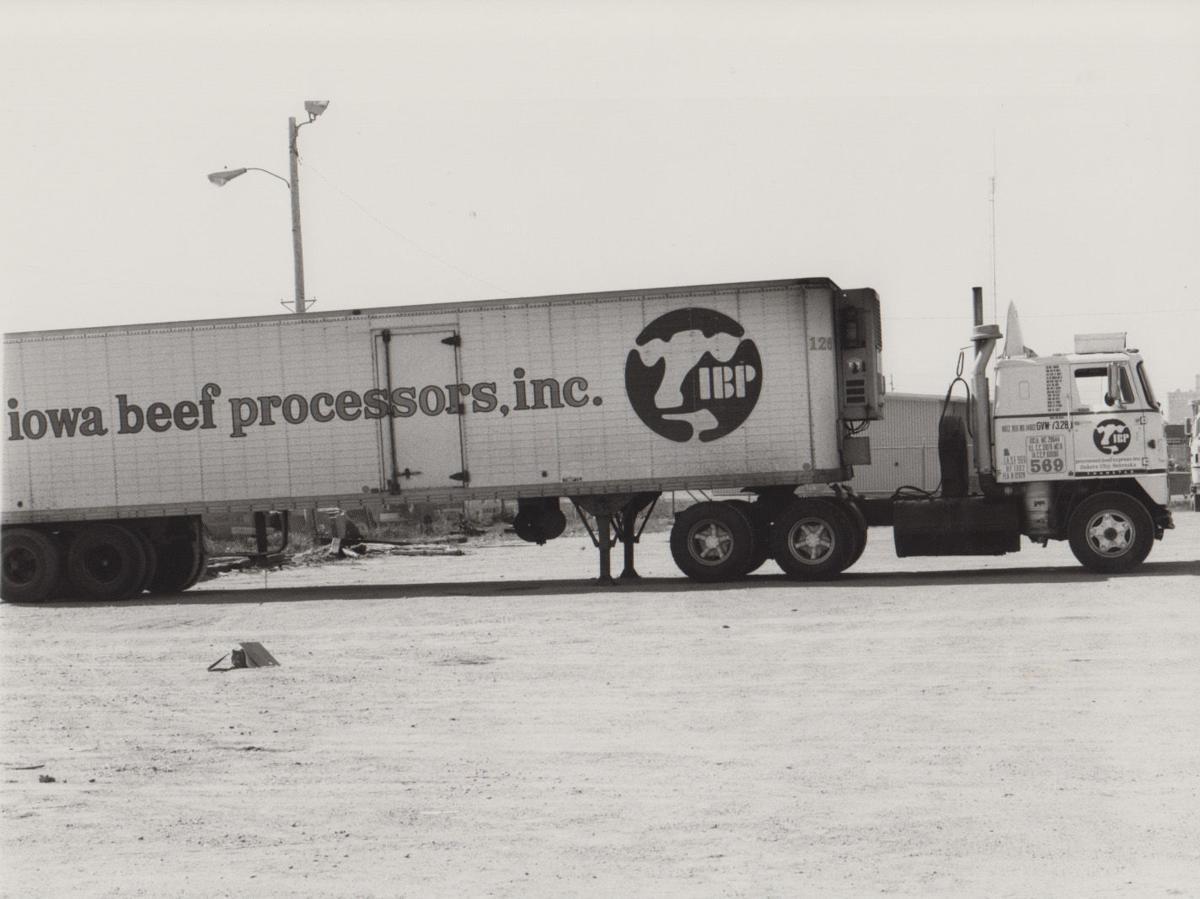 An Iowa Beef Processors truck is shown at the Dakota City plant. 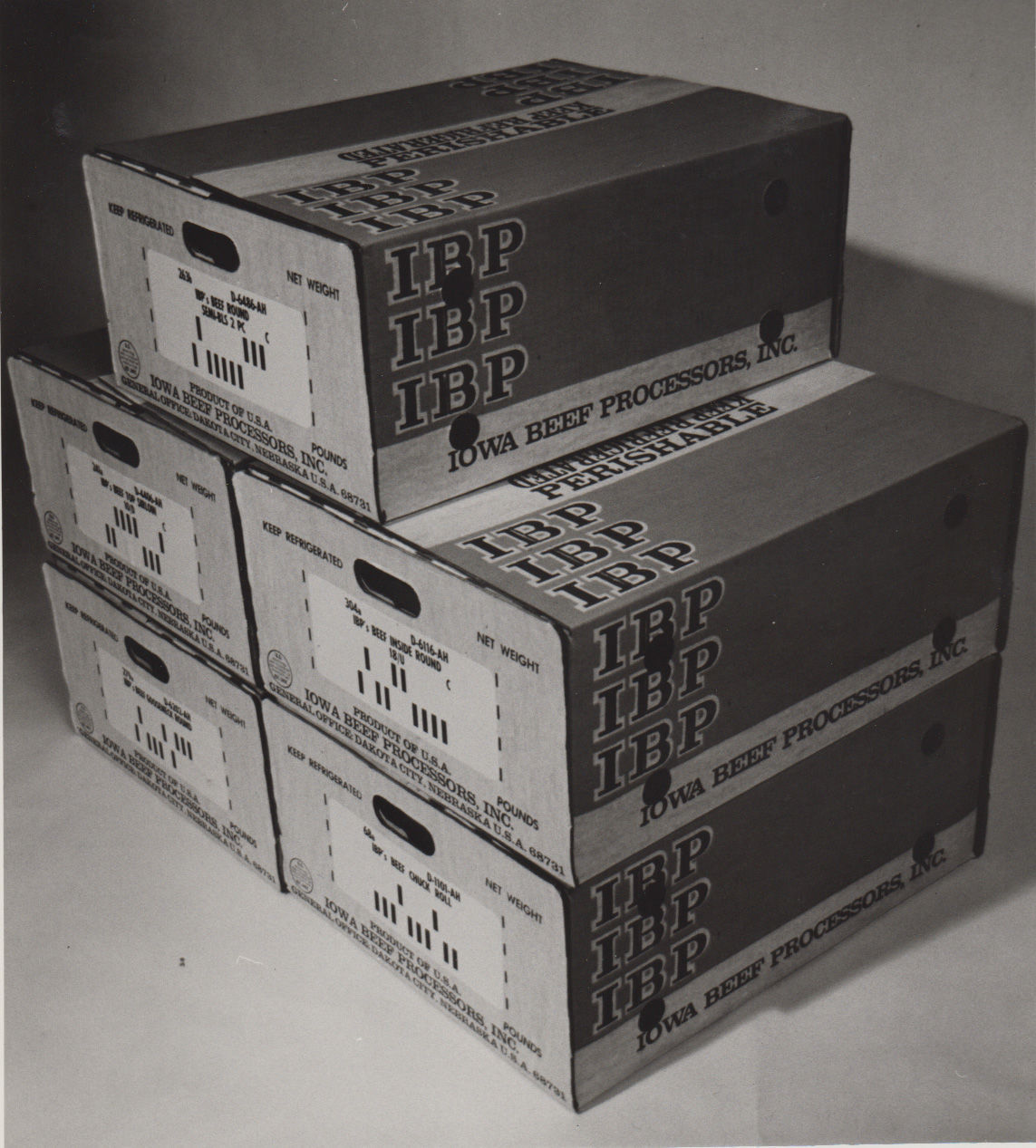 Iowa Beef Packers' Dakota City plant pioneered boxed-beef shipments, in which beef was cut down and packaged in boxes rather than delivered as carcasses. The method cut down on shipping costs and made beef easier to store and move.

DAKOTA CITY | When he started working on the processing line in what was then known as the Iowa Beef Processors plant in 1970, Mike Shumansky figured it would be a temporary job.

"My plan was to work here until I was drafted, then move on after that," he said.

Shumansky was drafted, all right. And after serving two years in the Army, he returned to the Dakota City beef plant.

"It's been quite a journey," said Shumansky, a processing line supervisor now in his 47th year at the plant, where more beef is processed than anywhere else in the world.

He could just as well have been talking about his employer, which over the years changed its name from Iowa Beef Packers to Iowa Beef Processors before shortening it to IBP inc.. In 2003, the name changed to Tyson Fresh Meats after Tyson Foods' purchase of IBP two years earlier.

No matter the name on the side of the building, the sprawling Dakota City facility has been a community mainstay for 50 years now, an anniversary that employees and invited guests will celebrate Friday with a huge picnic.

Plant operations began in February 1966, the same year Iowa Beef Packers moved its headquarters to Dakota City from Denison, Iowa, where the company was founded in 1961. A Dakota City plant that once covered 18 acres now has 41 acres under the roof and employs 4,500 people.

Those who remember the plant's early days likely would have a hard time recognizing it now. Major renovations, including two projects in the last decade totaling more than $170 million, have turned the plant into a sprawling complex. In the course of the expansion, original processing areas were rebuilt, the slaughter floor replaced and beef coolers, rendering facilities, box-handling operations and other plant systems were upgraded.

Those upgrades have facilitated the production of vacuum-packed, boxed beef for sale to wholesalers, retailers, hotels, restaurants and institutions. Bone, fat, trimmings and hides are recovered there and used in the making of various foods, pharmaceuticals, cosmetics and clothing.

When the plant opened, few could have expected the effect it would eventually have on Dakota City, neighboring South Sioux City and the entire Sioux City metro area.

"We would not have thought that it would grow to this scale," said Lance Hedquist, the South Sioux City manager since 1980. "Obviously it changed the makeup of Dakota City, South Sioux City and Siouxland."

The plant has attracted thousands of new residents to the area and has led to the creation and growth of local trucking, cold storage and pallet manufacturing companies, to give just a few examples.

And its boxed beef concept, in which meat was cut into smaller portions for shipment in boxes, replacing the traditional shipments of carcasses to major cities, revolutionized the meatpacking industry by cutting shipping costs and making the product easier to store and handle.

Through all those developments and expansions were people like Shumansky and Roger Jensen, a packaging supervisor who has worked at the plant since 1976.

Much of the work inside the plant has always been strenuous manual labor. Advances in automation have taken some of the physical strain from workers. Tyson continues to explore ergonomic improvements to production lines to make workers' jobs easier and safer, said Stouffer, who was hired by IBP in 1982 as a beef carcass merchandiser who monitored USDA meat grading in the plant.

Stouffer credits the company's increased attention to worker health and safety as one of the reasons for relatively calm labor relations for much of the past 30 years. Workers struck five times between 1969 and 1986, and some walkouts turned violent, even necessitating the call for the National Guard to provide crowd control during a 1982 strike.

In more recent decades, all union contracts have been ratified without work stoppages.

"There's a lot more understanding on our reliance on our team members," Stouffer said. "Because of that desire, I think you saw that butting of heads start to decline."

Dan Risner, president of United Food & Commercial Workers Local 222, said both labor and management have made strides in their willingness to sit down and negotiate. Working inside a packing plant will always be physically challenging, he said, but recent plant modifications have led to improved conditions.

"There's still work to be done on (ergonomics) at the plant, but I do think we're headed in the right direction," Risner said.

It's been 15 years since Tyson bought IBP, but that iconic name retains a presence.

Beef still leaves the plant in boxes with the green IBP logo stamped on them. Longtime employees and area residents still refer to the plant as IBP.

"I catch myself saying that now and again," Jensen said.

Despite all the changes during the past 50 years, one thing hasn't: the reliance on farmers and ranchers across the region. Stouffer said Tyson spent $2.5 billion in fiscal year 2015 to buy cattle to supply the plant. Most of those cattle come from independent farmers and ranchers from within a 150-mile radius.

"We rely just as much on independent farmers as we do on our customers," Stouffer said.

Customers' preferences will continue to shape the plant's future, Stouffer said. Consumers want leaner beef in portions that can be prepared quickly and easily. As a result, the plant is trimming off more fat from the beef cuts and breaking them down into smaller portions.

"We're going to be driven more by how do we satisfy that need, that niche," Stouffer said.

"It's always been a dependable place to work," he said. "I always thought they'd be here. They kept improving. People were always going to be eating meat."

Years the plant has been in operation.

Acres under the roof of the plant complex.

Number of workers in the plant and office.

Amount paid to producers in fiscal year 2015 to buy cattle to supply the plant.

Not every worker can share a personal problem with a supervisor. Not every employee has a support network at home.

ArtSplash offers something for all ages

SIOUX CITY | Artwork, music, food will be on display at this weekend's ArtSplash.

SIBLEY, Iowa | All the hogs carried in a truck were killed in a rollover wreck north of Sibley on Iowa Highway 9.

STORM LAKE, Iowa | Tyson Fresh Meats is seeking nearly $1.2 million in state incentives for a $30 million project that will allow its Storm La…

DAKOTA CITY, Neb. | A Dakota County panel on Monday turned down a proposed settlement in a dispute over the assessed valuation of the Tyson Fr…

PETA has asked Dakota County Sheriff Chris Kleinberg to investigate an allegation of the inhumane death of a cow at the Tyson Fresh Meats plant, shown above, in Dakota City. The meatpacker has received a notice of intended enforcement from the U.S. Department of Agriculture's Food Safety and Inspection Service.

The Iowa Beef Packers plant as it appeared in 1966. After several name changes, the last to IBP, the company was bought by Tyson Foods in 2001.

An aerial view of the Iowa Beef Packers plant in Dakota City is shown in 1966.

An Iowa Beef Processors truck is shown at the Dakota City plant.

Iowa Beef Packers' Dakota City plant pioneered boxed-beef shipments, in which beef was cut down and packaged in boxes rather than delivered as carcasses. The method cut down on shipping costs and made beef easier to store and move.