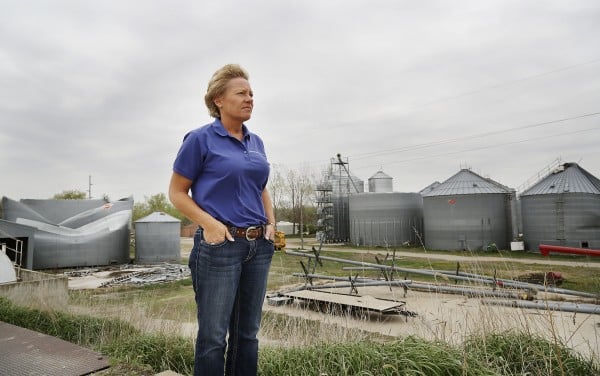 Mapleton Grain Co. co-owner Sheri Erlemeier is shown with grain bins mangled by a tornado that struck the Northwest Iowa city a year ago Monday. "It would take between $4 million and $6 million to replace what we lost," she says. 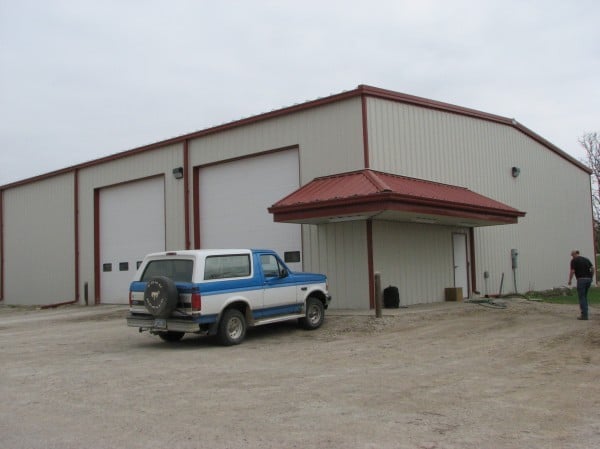 CHN Garbage Services in Mapleton, Iowa, is shown. The company built the metal building after a tornado destroyed its maintainenance shop across the street last year. 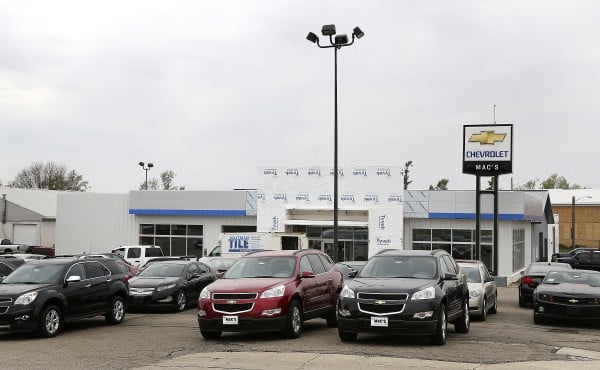 Cars are parked at the renovated Mac's Chevrolet in Mapleton, Iowa, on Tuesday. Many businesses have rebuilt since a storm tore through the area last year.

The 75-by-125 foot structure, which CHN Garbage Services finished building last summer, replaced an older maintenance shed leveled by a tornado a year ago Monday.

"The beams and everything were just ripped off the foundation," Clark said.

As he surveyed the wreckage that Saturday night, Clark's thoughts turned to the weekly routes that CHN operates in 17 Monona and Woodbury county communities. Fortunately, the company's garbage trucks, parked outside during the storm, escaped major damage.

"We fixed a few windows and mirrors, and we were able to pick up trash as usual the next Monday," he said.

Others weren't as lucky. Twenty-one commercial buildings and 46 homes were gutted by the April 9 tornado. Countless more were damaged in the city of 1,149.

Most displaced businesses got back up and running soon after the storm or within a few months.

A dozen companies have rebuilt or are in the process, said Marie Whiteing, president of Rebuild and Recover Mapleton, a volunteer board formed to coordinate the cleanup effort.

Among the type of businesses on that list: a heavy equipment contracting firm, an auto body shop, a convenience store and two thrift shops.

"In a small town, that's what we needed, all those businesses that came back and reopened their doors," said Erlemeier, a co-owner of Mapleton Grain Co. "I just feel badly we're not in that same boat."

The privately owned grain elevator, founded by Erlemeier's parents 60 years ago, had the most extensive damage of any business. The tornado ruined nearly all of its grain handling equipment, and two-thirds of its storage, as winds of up to 135 mph ripped off roofs and twisted corrugated steel grain bins.

More than two dozen mangled bins are still standing, but many are empty, a constant reminder of the storm's furry -- and its lasting effect on the business.

Though satisfied with the insurance settlement, the operators ultimately concluded it would not make financial sense to rebuild.

"It would take between $4 million and $6 million to replace what we lost," said Shari Erlemeier, 49, who runs the business with her husband, Leo Erlemeier, and brother, Tony Elmquist. "At our ages, we would never recover what it would take to build back."

The company's satellite facility in nearby Soldier was unharmed by the storm. But business has slowed greatly at its Mapleton site, where its licensed storage capacity was reduced from 1.78 million bushels to about 300,000 bushels. On a good day, the facility now receives 15 to 20 semi-loads of grain, down from some 120 prior to the storm.

The age of an owner also factored in the future plans for another business damaged by the tornado. High winds smashed front windows and tore off parts off the roof at Russ's Furniture. That eventually prompted owner Russ Trieber to shut down the furniture business he operated for 44 years.

"I was ready to retire," the 69-year-old said Tuesday. "This just pushed it up."

Another business, New to You, soon took over his sprawling showroom and warehouse. Owned by Jeff and Julie Petersen, the business sells used furniture and installs carpet and floor coverings.

Trieber, who has been helping out the Petersens, said New to You filled an important need. Many Mapleton residents had to replace furnishings and couldn't afford brand new items.

"Our business in Mapleton the past year has been great," said Torrey Wingert, vice president and chief financial officer of Sioux City-based Bomgaars.

The Bomgaars store itself, on Fourth Street, received storm damage and was never forced to shut down. But the tornado destroyed its warehouse across the street.

To replace its lost building, Bomgaars built a 2,400-square warehouse behind its store. The new receiving area has provided increased efficiencies, Wingert said.

Mac's Chevrolet, the town's only new car dealer, is also in the process of rebuilding its showroom. The tornado hit the dealer's office building and service center across the street, and damaged all of the roughly 70 vehicles parked outside.

Local leaders say they feel fortunate that nearly all the businesses displayed by the storm have stayed in town.

"For the most part, if they were an active business, all of them are back open and active again," Mapleton City Clerk Karla Uhl said. "The ones that have built back are nicer buildings."

A YEAR LATER: Mapleton, Iowa, on path to recovery

Mapleton gets $295K for tornado recovery

MAPLETON, Iowa | The city of Mapleton has received a $295,571 loan from the Iowa Homeland Security and Emergency Management Division to help w…

Click here to see "Miracle in Mapleton," a documentary by the Journal

The town of Mapleton, Iowa, was devastated by a tornado on April 9, 2011. Part of the town was destroyed by the E3 twister, and much more of t…

MAPLETON, Iowa -- Shari Erlemeier bent over to pick up one of the metal screws scattered in front of the Mapleton Grain Co. offices on Sunday.

Mapleton tornado takes everything but a life

MAPLETON, Iowa -- Tales of survival, luck and an efficient warning system rose Sunday from Mapleton, a town that staggered to its feet, bruise…

GALLAGHER: Now what? Mapleton residents reach for business as usual

Mapleton Grain Co. co-owner Sheri Erlemeier is shown with grain bins mangled by a tornado that struck the Northwest Iowa city a year ago Monday. "It would take between $4 million and $6 million to replace what we lost," she says.

CHN Garbage Services in Mapleton, Iowa, is shown. The company built the metal building after a tornado destroyed its maintainenance shop across the street last year.

Cars are parked at the renovated Mac's Chevrolet in Mapleton, Iowa, on Tuesday. Many businesses have rebuilt since a storm tore through the area last year.