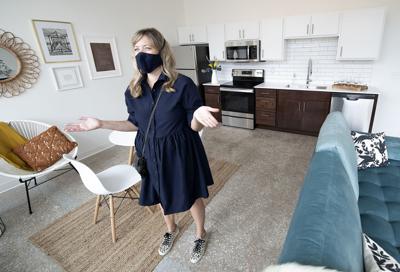 SIOUX CITY -- The end is in sight for the multimillion-dollar renovation of the old Commerce Building in downtown Sioux City.

Omaha-based J Development has spent the past several years developing the brick structure, at 520 Nebraska St., into 71 apartments and roughly 12,000 square feet of commercial space.

The apartments are called the Bluebird Flats, a name that came from Bluebird Records, a record label that signed Louis Armstrong. Armstrong played in the building's fifth-floor ballroom decades ago.

Julie Stavneak, a co-owner of J Development, said Thursday that the building's interior should be done by the end of October, while the exterior work should, hopefully, be finished by the end of this year.

Fifteen leases have already been signed and 10 tenants have moved in. The developers have received a certificate of occupancy for floors two, three and four, and are expecting to receive certificates for floors one and five in a few weeks.

J Development planted its flag in the old Commerce Building in 2017. The nearly three years of planning and renovations were unusual for a project of its size -- 18 to 24 months would be closer to the norm. The longer time frame, Stavneak said, was the result of efforts to preserve the building's historical integrity and related regulatory hurdles.

The building retained much of its terrazzo flooring, its reinforced concrete "mushroom pillars" throughout the interior, some of the original windows and, of course, the more than 1,600 light sockets on the exterior, which have been in use on and off over the past 108 years.

"We're replacing all of those (light bulbs) too, which, at night time, is going to be super cool when those all glow," Stavneak said.

The 71 apartment spaces include six studios, 13 two-bedroom and 52 one-bedroom apartments. There is some variation between the apartments (some have terrazzo floors, others have polished brick flooring, and still others have modern vinyl), but most have lofty, 12- to 14-foot ceilings and massive windows that offer attractive views of the downtown.

The apartments, which range from roughly 660 to 1,320 square feet, will rent from approximately $850 to $1,370 a month. J Development has contracted with the Seldin Company for property management services.

Each unit has its own washer and dryer, and the building will boast common space, a fitness room and a rooftop firepit and grilling station.

Pets are allowed: no animal could ever damage those industrial terrazzo or brick floors. Landlords, particularly those with larger properties, have grown increasingly tolerant of pets in recent years -- the Bluebird Flats will even have a "dog run" area in the back with grass.

"If you think about walking through Target or a grocery store, and they have a dedicated aisle for pets. I mean, the writing on the wall is just -- many more households have animals than they used to have," Stavneak said. "And so, instead of not allowing them, we try to figure out ways to allow them and have enough space for the animals."

"We believe that we have some potential strong candidates, so we're excited to get it leased up," she said of the commercial space.

The Commerce Building was originally built in 1912 by the C.F. Lytle Co. as Ralph A. Bennett's Motor Mart Building, according to the Sioux City Historic Preservation Commission.

Fittingly enough, the Commerce Building's aesthetic has been described as "Commercial," and the exterior is largely unchanged from its original form. The structure is a poured reinforced concrete frame, patented by the engineer C.A.P. Turner as the "Turner Mushroom System," according to the building's National Register of Historic Places registration form.

The four-story building housed Bennett's auto supply company and included a massive freight elevator to lift automobiles for display on the upper stories of the structure. Cars were repaired, repainted and displayed on the various floors, except the fourth floor, which was designed for the Sioux City Commercial Club and included meeting and dining spaces and billiard rooms.

In 1919, the Sioux City Chamber of Commerce moved its offices to the building, and the building was renamed the Commerce Building.

A fifth floor was added, circa 1921, and housed Tom Archer’s Roof Garden. It later became a music hall and dance club called the Skylon Ballroom. Lawrence Welk and his band performed there in 1939 before he signed with Decca. The building also served as the home of the Sioux City Art Center from 1953 until 1961, when the center moved into the Municipal Auditorium.

Prior to the renovations, the building was home to a variety of tenants, including the Yoga College of Sioux City, several studio artists and the Disabilities Resource Center, plus a field office for Iowa 4th District U.S. Rep. Steve King.

Pier Center for Autism hopes new $1.5M facility will be complete by spring

Once Upon a Child returning to Sioux City, after 20-year absence

The franchise, which specializes in secondhand apparel, furnishings and toys for babies, toddlers and children, is expected to open its doors to shoppers later this month. It began purchasing items last month.

The council also unanimously approved an ordinance that would regulate pedestrians' use of medians within city streets and highways. It will take effect Saturday.

Developers of the 73-unit complex have variously described the new apartments as "luxury" and "upscale" housing, and said the apartments provide "a standard of living they won't find elsewhere in the city."

No. 6 story of 2020: Major projects open in downtown Sioux City

Two long-awaited downtown projects came to fruition in this year -- the renovation of The Warrior Hotel into Sioux City's first Marriott Autograph Hotel and the completion of the Siouxland Expo Center. 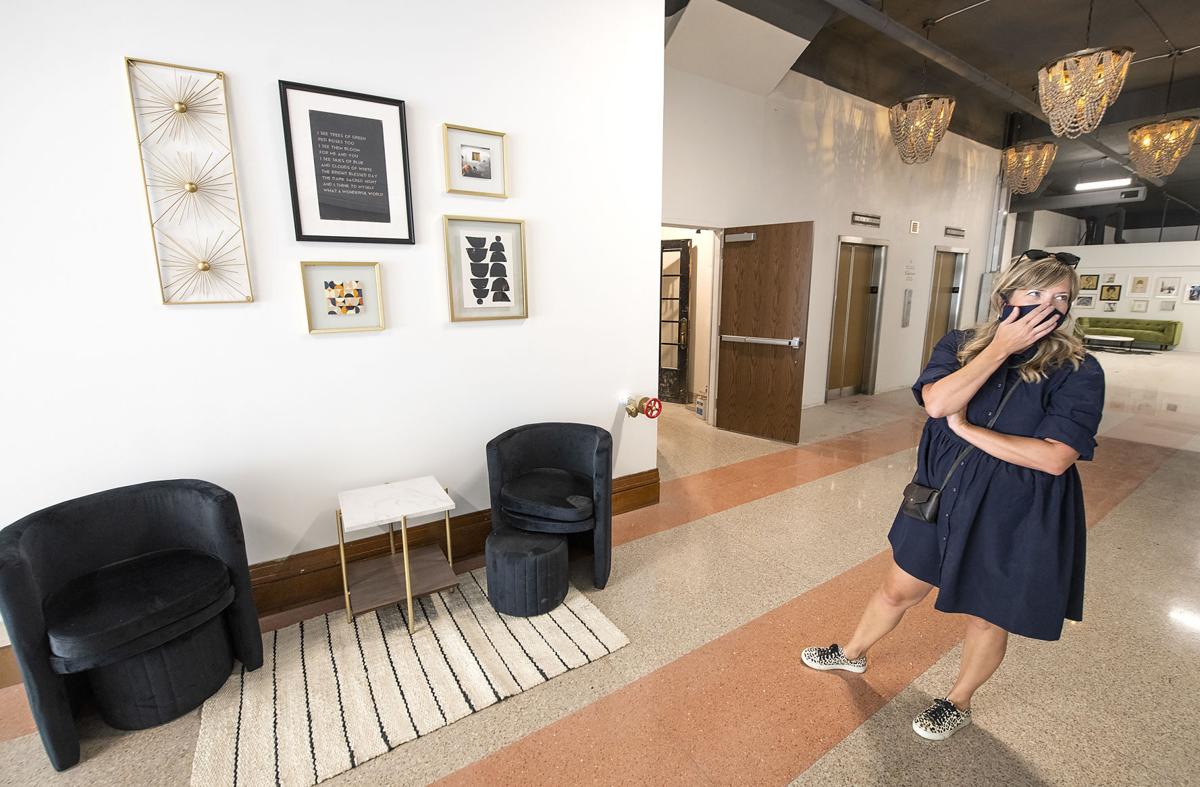 Melissa Williams, a designer working with J Development Company, is shown Thursday in the first floor lobby of Bluebird Flats, an apartment and commercial building traditionally known as the Commerce Building, at 520 Nebraska St. in downtown Sioux City. 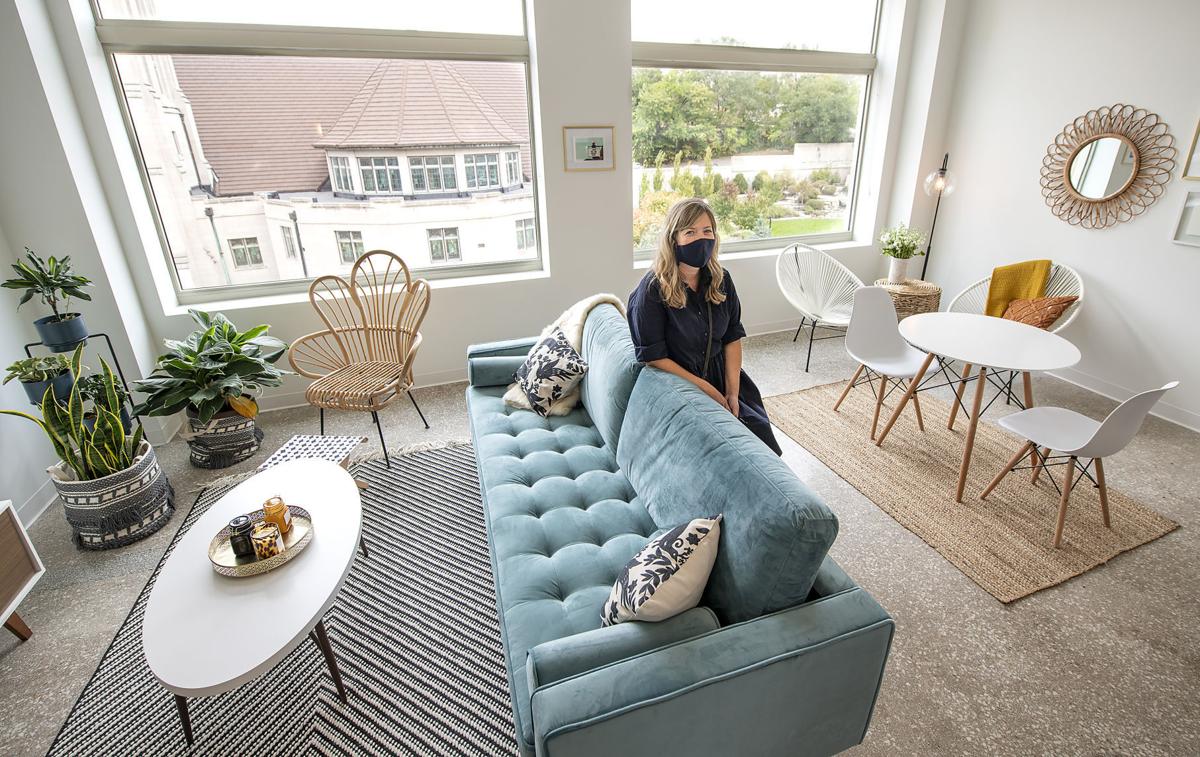 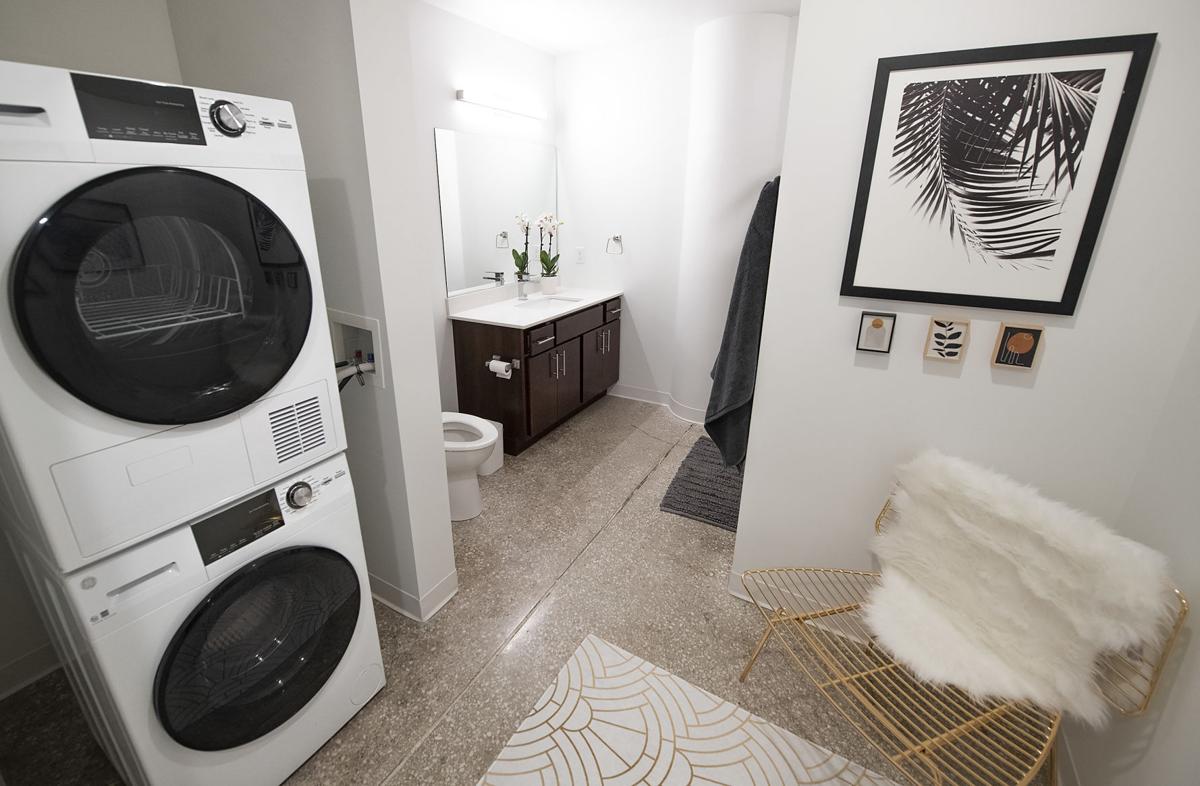 Bath and laundry space is shown Thursday in a model apartment at the Bluebird Flats, an apartment and commercial property traditionally known as the Commerce Building, 520 Nebraska St. in downtown Sioux City. 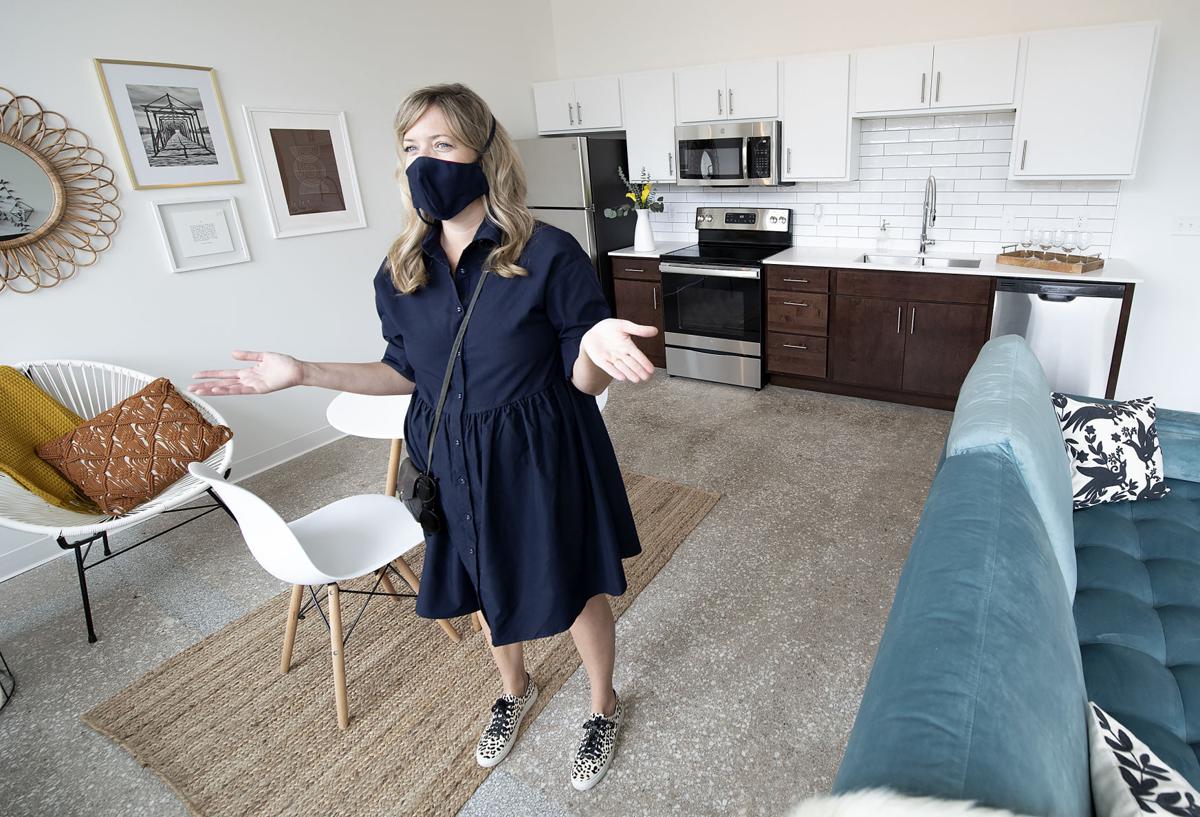 Melissa Williams, a designer working with J Development Company, is shown Thursday in a model apartment at Bluebird Flats, an apartment and commercial property traditionally known as the Commerce Building, 520 Nebraska Street in downtown Sioux City. 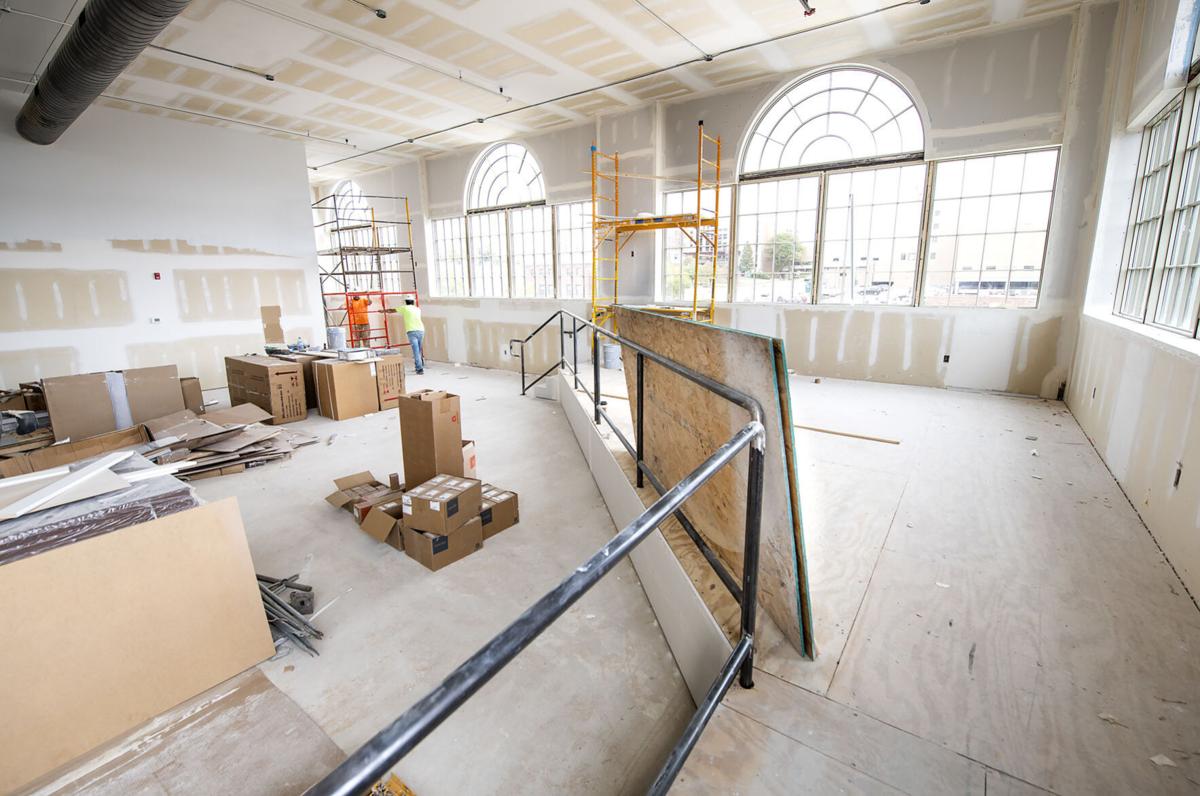 Remodeling work is shown in what was once top floor ballroom space Thursday at the Bluebird Flats, an apartment and commercial property traditionally known as the Commerce Building, 520 Nebraska St. in downtown Sioux City.