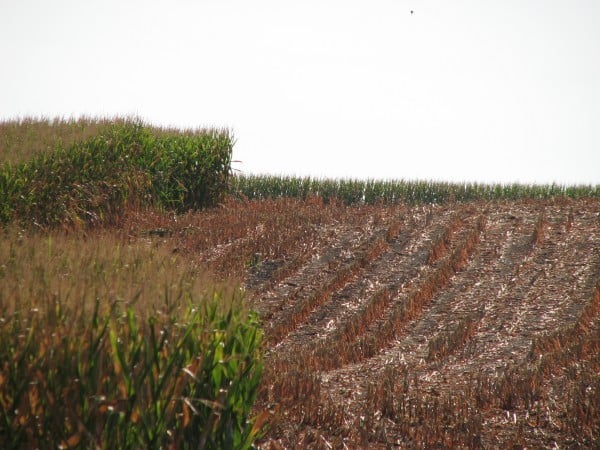 Rows of corn in this field near Lawton, Iowa, were cut into silage last week. The severe drought is prompting area farmers to start harvesting salvage more than a month earlier than normal. 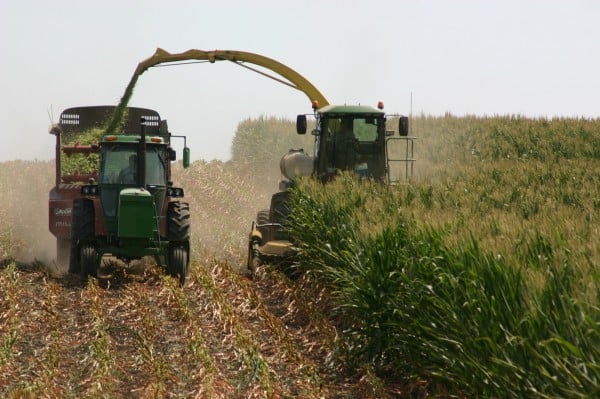 With low yields expected because of the drought, Iowa farmers have already chopped silage for feed, like this field in Benton County.

AKRON, Iowa | With their parched fields considered a lost cause, more Siouxland farmers last week cut down stunted corn plants for silage to feed to their livestock.

Cattle producers typically devote a portion of their corn crop to silage, but they normally don't start chopping until late August or early September.

The severe drought is prompting tri-state farmers in the worst-hit areas to salvage what they can now before the stalks dry up even more.

"Our corn is too far gone," said Akron, Iowa, area farmer Randy Kroksh,who chopped 40 acres of silage Monday. "I have some fields that won't yield anything. In some places, there might be 50 bushels per acre, but I doubt it."

Kroksh farms in western Plymouth County, which has been one of the areas most affected by this summer's hot and dry conditions.

"We haven't had any measurable precipitation since Memorial Day weekend," Kroksh said Tuesday. "There are quite a few cow-calf producers in this area that are chopping everything they have because they need the feed."

One of the worst droughts on record also has prematurely dried up pastures where cow-calf herds would normally be grazing this time of year. That's forced producers to dip into their hay reserves much earlier than expected.

"I normally don't have to feed cows hay until the winter months," said Kroksh, who has 75 cows. "My hay reserves probably will be all gone by the middle of September, and then we'll have to start feeding silage."

With the unrelenting hot, dry conditions also stressing this year's alfalfa crop, hay prices have soared to between $250 and $350 per ton, more than double the rate a year ago.

Chopping silage allows farmers to put off buying feed at those prices. Some producers with no livestock are cutting silage to later sell the forage.

While many of the wilted corn plants failed to produce an ear, the green stalks and leaves still provide some feed value.

Because of the poor quality, Kroksh said it took 40 acres of silage to fill his pit, compared to about 15 acres in a more typical year.

"It took that many more acres this year because the corn is shrinking down and there's very few kernels in there," he said.

Ag experts are urging drought-stricken farmers to first test their silage for nitrate levels before feeding it to their livestock. If the concentration is too high, the nitrates can lead to sickness and even death.

"The highest risk is if you're going to green chop it, and feed it directly," said Joel DeJong, an ISU Extension crop specialist for 10 Northwest Iowa counties that includes Plymouth.

Applied to fields in the fall or spring, nitrogen is a nutrient needed to grown corn. This year's drought has elevated the risk of high concentrations of nitrates in the plant, De Jong said.

"A lot of fields didn't form ears. If you don't have that ear, you have a much higher concentration of nitrates in the plant," he said.

Kroksh said he plans to wait 30 to 60 days to feed the newly-cut silage to his cattle.

Like other producers who have given up on their damaged corn crop, Kroksh expects his losses to be covered by insurance. In fields where they have chopped silage, they leave a few rows of corn standing for insurance adjustors to look at later.

Crop insurance typically pays a farmer up to 80 percent of production costs in the event of a total crop loss, according to industry officials.

Average statewide temperature through the first three weeks of July

The last time Iowa experienced a worst drought than this year, according to the state climatologist

Chilton qualifies for Court of the Table

SIOUX CITY -- Mathew Chilton of Ameriprise Financial at Whispering Creek in Sioux City has qualified for Court of the Table, a milestone achie…

WATCH NOW: New Runnings store in Vermillion is more than 7 times as big as the old one

VERMILLION, S.D. -- The new Runnings store in Vermillion, with 74,000 square feet of space, clocks in at more than seven times the size of the…

Rows of corn in this field near Lawton, Iowa, were cut into silage last week. The severe drought is prompting area farmers to start harvesting salvage more than a month earlier than normal.

With low yields expected because of the drought, Iowa farmers have already chopped silage for feed, like this field in Benton County.