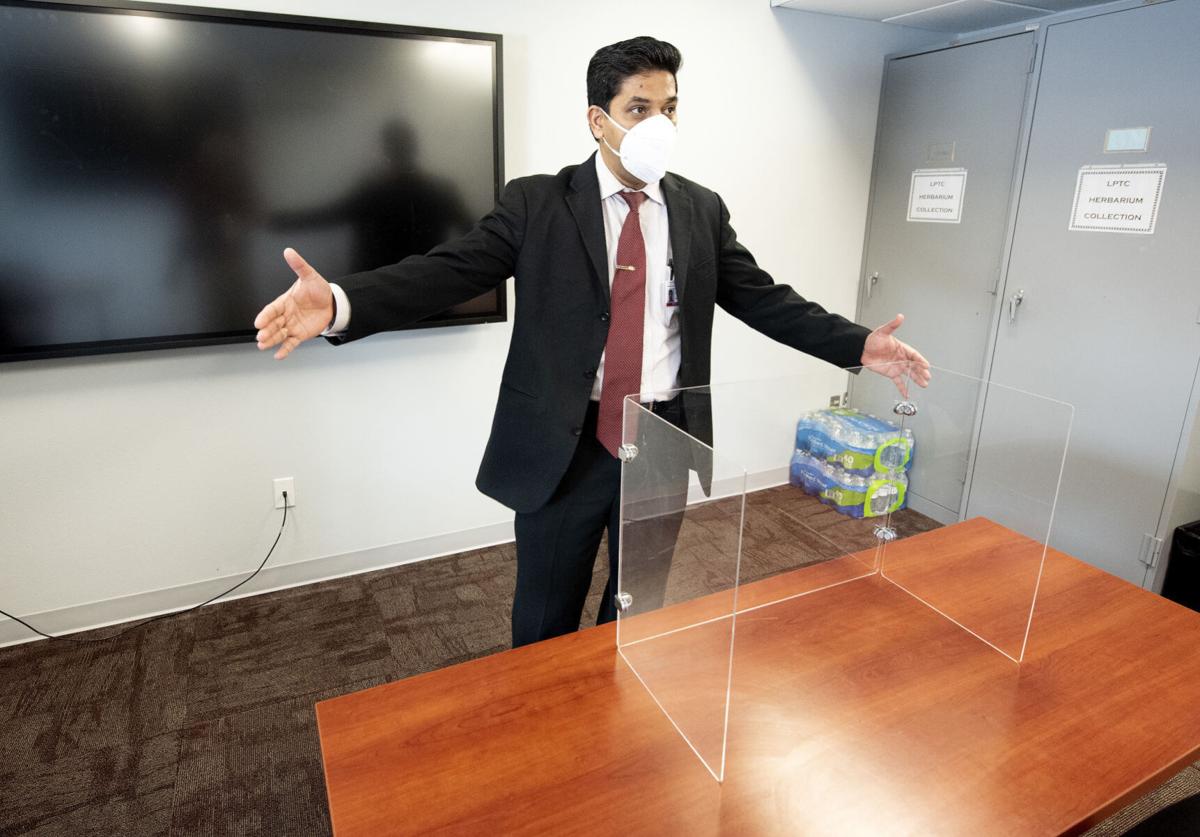 Manoj Patil, president of Little Priest Tribal College, talks about classroom social distancing efforts and the addition of desktop plastic shields during an interview at the college on Feb. 17. Patil said the college, located on the Winnebago Tribe's reservation in northeast Nebraska, has taken advantage of grants and programs offered as COVID-19 pandemic relief. 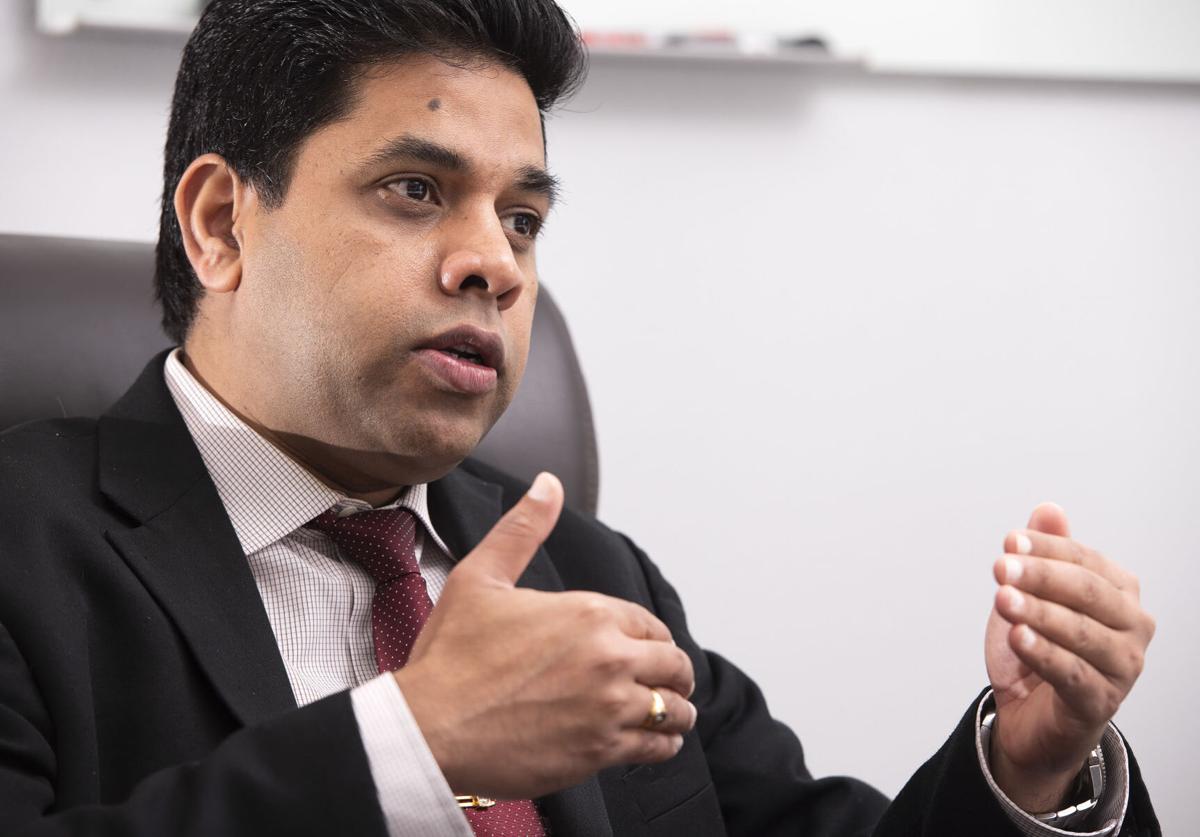 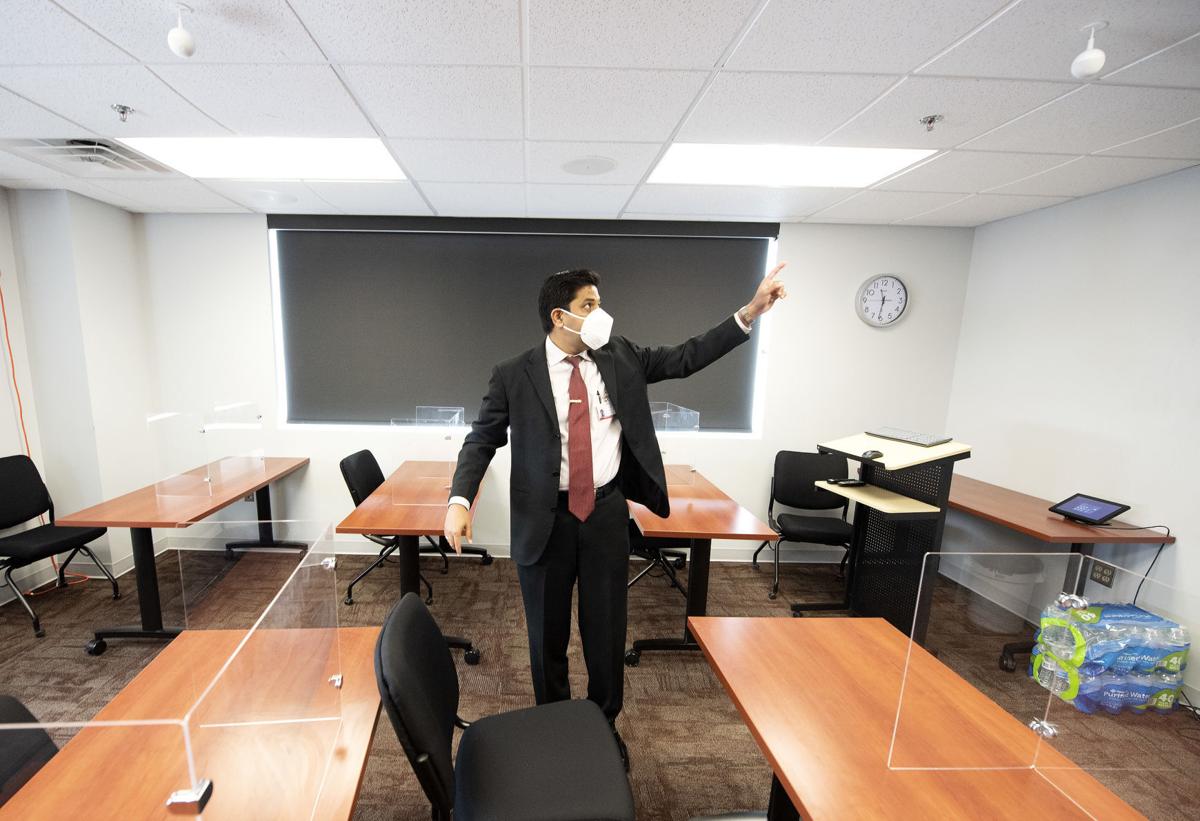 Manoj Patil, president of Little Priest Tribal College, points out microphones installed in the ceiling of a "flex" classroom during an interview at the college Feb. 17. The flex classroom allows for both in-person and distance learning simultaneously. Patil said the college, located in Winnebago, Neb., has taken advantage of grants and programs offered as COVID-19 pandemic relief to make improvements to the college, including technology to facilitate distance learning and adding campus buildings. 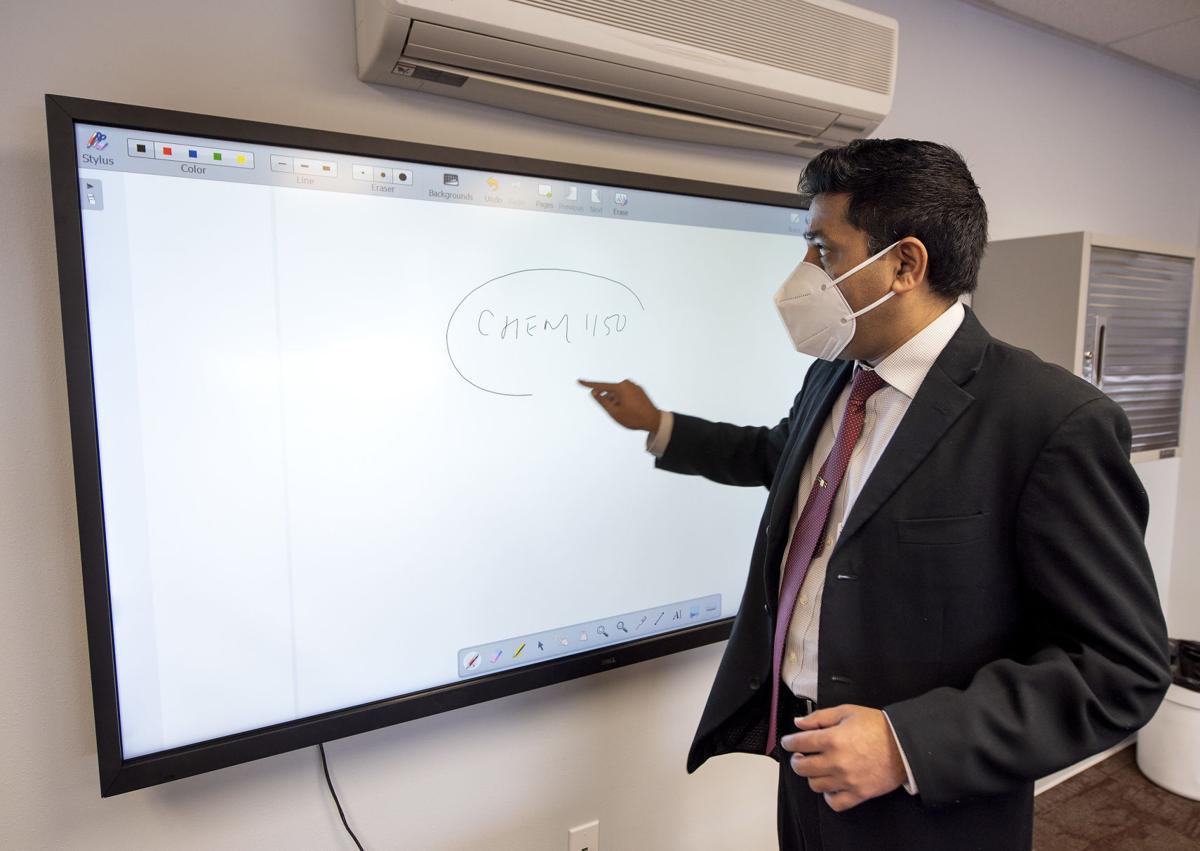 Little Priest Tribal College President Manoj Patil uses his finger to write on a large touch-screen monitor in a "flex" classroom on Feb. 17.

WINNEBAGO, Neb. -- Manoj Patil likes to say that the gush of emergency funding brought on by the COVID-19 pandemic worked wonders at the Little Priest Tribal College.

"People laugh at me when I say this: This has actually been the best thing for us," Patil said in an interview last month. "And I know it's a weird thing for me to say, but college never had this amount of funding, ever."

Patil, 42, the president of Little Priest, said that the small college has received things they probably would have ordinarily struggled to obtain -- two new buildings, massive upgrades to their classrooms -- had it not been for the pandemic funding. While other post-secondary schools dealt with hundreds of infections, Patil said that only six individuals at Little Priest contracted the virus.

"We got tremendous funding from the CARES Act, COVID funding, and we are delighted," Patil said.

The college is anticipating even more money after the passage of the $1.9 trillion American Rescue Plan this month: perhaps as much as $8 million from the Department of Education and the Department of the Interior, on top of the money from last year.

Little Priest plans to use the latest funding to develop a 10-acre parcel adjacent to the campus, which is owned by the Winnebago Tribe, into more buildings and campus space.

The tribe is expected to be transfer the land to to the college soon. If and when that happens, Patil has his plans at the ready. (The Winnebago Tribe is one of the college's main supporters, and the tribe selects the college's board of trustees, who have to be members of the tribe.)

Developing the 10 acres -- making the campus substantially larger -- is a major element of Patil's five-year plan for Little Priest. He wants to add a student center, a new cafeteria and other building on that land, possibly including a wellness center -- mostly things that would boost the quality of life for students, thus boosting enrollment.

"That's where we're going to grow the campus," he said.

The 25-year-old college in Winnebago got a new dormitory and a new IT building in the closing months of 2020, thanks largely to various stimulus measures. They now have a total of nine buildings, including a building in the Village Market for community workshops and classes.

The new dormitory was being used by the Twelve Clans Unity Hospital early this year as overflow for individuals and families in quarantine and isolation. By the fall, the dorm is expected to be used for student housing, rather than as an ancillary medical facility.

Patil, who was born in India and immigrated to the U.S. in 2001, joined the faculty of Western Iowa Tech Community College as a chemistry teacher in September 2002. In August 2018, he became vice president at Little Priest, then was promoted to interim president in November 2019. He was named president of the college last April, in the middle of the pandemic's harsh early phase.

"I remember March 16, 2020, we had to go completely online, and just like many other colleges and universities and schools, nobody is ready for online instruction, especially for our student population, they like to have the face-to-face instruction," Patil said, snapping his fingers to indicate how abruptly the change was made. "I can only imagine what students went through."

Initially, remote learning did not work perfectly. A significant segment of students did not have Internet access at their homes, and roughly 25 percent took an incomplete grade or dropped out of their courses. It appears that some of them had assumed in-person learning would resume during the summer semester. "Honestly speaking, the online instruction is not for everybody," Patil said.

In the summer, after the school received its CARES Act funding and money from the American Indian College Fund, Little Priest got to work repairing some of the issues that had plagued them in the spring. Students now receive laptop computers from the college and can have their Internet bills paid by the college. Paycheck Protection Program funds, meanwhile, enabled the college to retain its 50 employees.

"That's why I'm grateful for the CARES Act funding and the COVID funding. Without that, I do not know where we would be," Patil said. The school also gets funding from the U.S. Department of Education and from the Bureau of Indian Education -- "Thank God for these two agencies," Patil said.

Existing classrooms also got substantial upgrades. They're now outfitted with HyFlex video technology, which Patil spoke about at length. The $200,000 HyFlex system of cameras, video screens and microphones makes for a much neater online learning experience for students -- they can see the classroom's whiteboard on their computer screens as if it were directly in front of them and readily ask questions of the instructor.

Patil anticipates a return to normal in-person classes by the summer, though he also said that HyFlex will likely remain a part of the mix -- Little Priest now has students as far away as Utah and Arizona taking online classes.

The college's enrollment this year dipped slightly, to 113, compared to 121 last year. Patil said that Little Priest's decision to suspend its athletic program through fall 2022 likely played a role in that. Eighty-five percent of the students are Native Americans, and the overwhelming majority of the student population is eligible for Pell Grants and other financial aid. Students seldom have out-of-pocket costs.

This year, Little Priest began facilitating tuition-free dual-credit courses for Nebraska high school students, so that they can earn course credits through the college. Were it not for that, Patil said, enrollment figures would likely be under 100.

Enrollment at Little Priest has been remarkably steady over the years, Patil said -- he made a long flatline gesture with his arm when describing the size of the student population over time. But he has plans to change that.

"I see that as an opportunity, and a concern," Patil said. "The concern is, why it's not going up. The opportunity is, we have a lot of room to grow right now."

Little Priest officials have been actively working to engage other colleges and universities in "articulation agreements" to add new programs, whereby the coursework in certain subjects are shared between colleges to some extent. Under these agreements, Little Priest students can readily transfer to those schools to complete a four-year degree (and beyond) if they so wish.

Perhaps most intriguingly, Little Priest has added a new "Cannabis Studies" program starting in the fall, through an articulation agreement with Doane University in Crete, Nebraska, wherein students learn how to grow and tend to cannabis plants, how to maintain a hemp farm and extract the THC and CBD from marijuana. With the addition of the cannabis program, Little Priest will offer a total of seven majors. They're also trying to put together programs in agriculture science, business and chemistry -- they're hoping to offer 10 programs by the fall of 2022.

"And I think it's a very realistic goal," Patil said, adding that there's no reason to expect enrollment to grow much if there are no new programs being added.

SIOUX CITY -- The Castle on the Hill Association has set April 16 as the deadline for its scholarships.

SHELDON, Iowa -- The Northwest Iowa Community College has commenced on a $9 million expansion and renovation of its health science building.

Manoj Patil, president of Little Priest Tribal College, talks about classroom social distancing efforts and the addition of desktop plastic shields during an interview at the college on Feb. 17. Patil said the college, located on the Winnebago Tribe's reservation in northeast Nebraska, has taken advantage of grants and programs offered as COVID-19 pandemic relief.

Manoj Patil, president of Little Priest Tribal College, points out microphones installed in the ceiling of a "flex" classroom during an interview at the college Feb. 17. The flex classroom allows for both in-person and distance learning simultaneously. Patil said the college, located in Winnebago, Neb., has taken advantage of grants and programs offered as COVID-19 pandemic relief to make improvements to the college, including technology to facilitate distance learning and adding campus buildings.

Little Priest Tribal College President Manoj Patil uses his finger to write on a large touch-screen monitor in a "flex" classroom on Feb. 17.