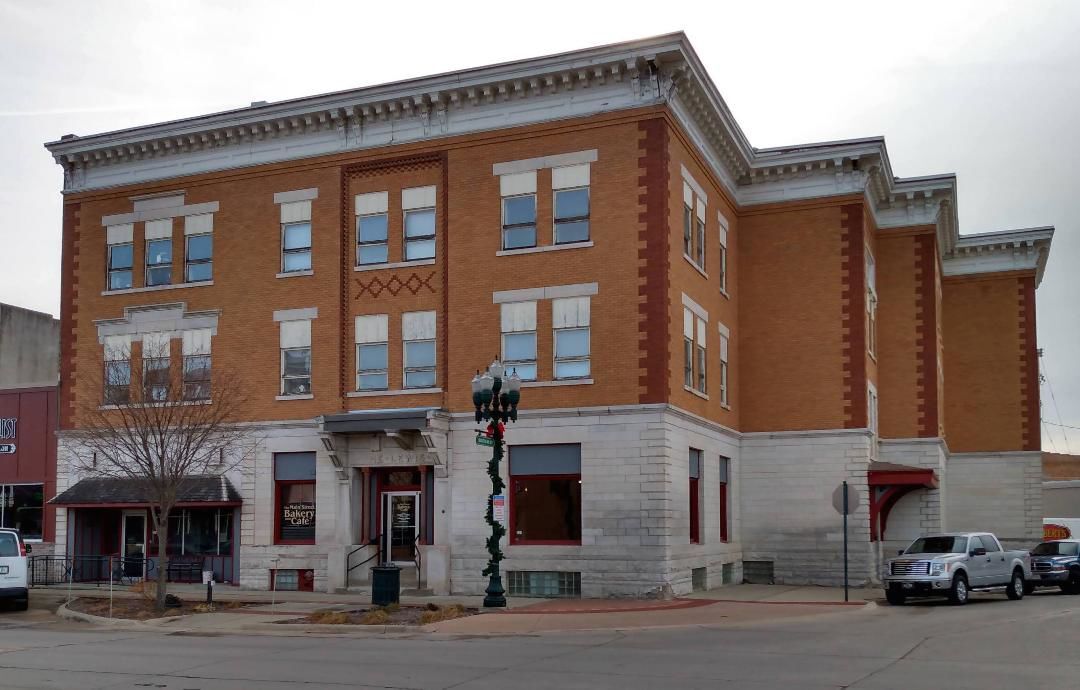 Zachary Zoul plans to restore the historic Lewis Hotel in downtown Cherokee to its turn-of-the-century charm. The 122-year-old building at 231 W. Main St. is listed on the National Register of Historic Places. 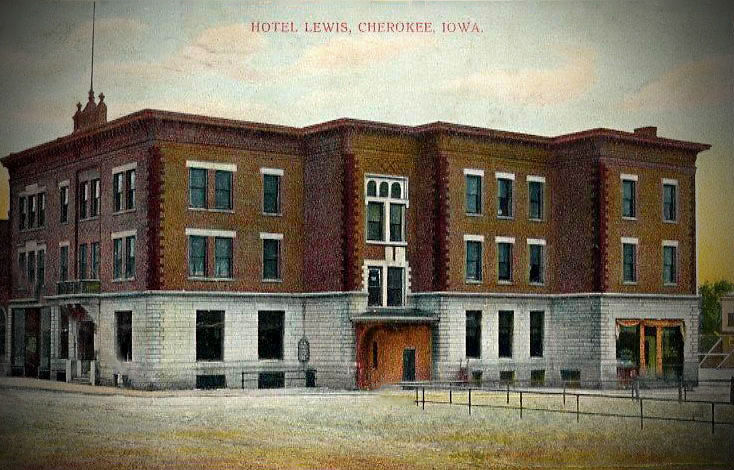 The Lewis Hotel in Cherokee, Iowa, is shown in a postcard circa 1910. A new owner has purchased the historic building and is planning to breathe new life into the property.

CHEROKEE, Iowa -- A property owner-management firm has taken possession of the historic Lewis Hotel in Cherokee, and is planning to restore the landmark structure to its turn-of-the-century charm.

Zoul is planning a more than $1 million, multi-phase project for the mixed-use building, listed on the National Register of Historic Places.

Renovations began the day after Zoul took possession of the Lewis, one of the larger and more-prominent structures on Cherokee's Main Street.

The upper floors of the Lewis (where hotel rooms were located) were converted into 20 apartments some years ago. The apartments were fully occupied at the time Zoul acquired it.

In the first phase, which Zoul calls the "commercial phase," work will be done on the building's roughly 8,500-sqare-foot first floor.

"We're restoring the original grand lobby and foyer. (Previous owners) had split it off with a wall that separated the foyer from the grand lobby. We took that wall down today, and now we've kind of reunified the entrance foyer and the lobby," Zoul said. "And the original lobby is pretty much intact, with original flooring, the original woodwork, and we're going to bring it back to its original state. We don't have far to go, because it was largely there, except for this wall that split it off."

Once renovations and build-out are complete, Zoul plans to rent the first floor out as commercial spaces and office suites -- he's also keen on getting a microbrewery to move in, and has a spot all picked out for it.

"Cherokee's downtown is really very strong and vital, it essentially has 100 percent occupancy in its retail core," he said. "There's not a vacant storefront there. So, we think these spots are going to be sought-after."

Prior owners of the property had renovated the upper floors when they turned them into apartments, Zoul said, and relatively little of the original turn-of-the-century finishes or woodwork remain there. Zoul even climbed up into the ceilings in hopes of discovering any original, decorative tin ceilings concealed by newer ceilings. The search wasn't fruitful.

"All those elements are gone, the woodwork -- some of the window trim is still there, but it's largely contemporary," he said.

Nevertheless, Zoul has plans to spruce up the upper floors.

"We're going to take it to the next level with new finishes and wall coverings, floor coverings, that sort of thing," he said.

For the time being, the residential spaces will remain apartments, though Zoul has engaged a hotel consulting firm to look at the possibility of making part of the building into a hotel again.

Historically, the upper floors of the building had "tall, vertical" windows -- like other buildings of the late 19th and early 20th century -- but Zoul said that these were later replaced with shorter, modern windows that didn't look the same, and which didn't completely fill the window frames.

Other than the windows, the exterior of the building appears to be largely unchanged from the day it was new.

Zoul plans to replace the squat windows with historically correct, full-length versions in the spring.

"It'll bring back the historical, architectural integrity of the building, by doing that," he said.

The Lewis Hotel was completed in 1899, the brainchild of Robert A Lewis, a developer, carpenter, nurseryman, beekeeper and early Cherokee resident.  Lewis built the hotel on an irregular, trapezoidal-shaped parcel near the railroad tracks at Main and Fourth streets.

The odd shape of the parcel led to an irregular building layout, with a series of bays jutting out on the Fourth Street side -- for this reason the building's south (back) end is quite a bit wider than its north (front) end.

The upper floors of the hotel are constructed from two colors of brick with decorative limestone elements above the windows, while the lower story's exterior was built entirely of limestone.

The hotel replaced earlier wooden structures on the property described as "old shacks" at the time, according to a National Register of Historic Places application for the building.

Grand as it was, the Lewis was considered a risky venture when it was being developed, and some people in the area evidently thought it would bring "financial destruction" to its owner. It remained under the control of Robert A. Lewis's family until 1966, according to the NRHP application documents.

The three-story building was designed by the Cedar Rapids architectural firm of Josselyn and Taylor Co., who also worked on the elaborate, brick and stone Cherokee Mental Health Institute. Robert A. Lewis is also believed to have performed some sort of supervisory role in the construction of the mental health institute, which opened in 1902 and remains in use.

The hotel was more-or-less brand new when, at the end of July, 1900, it suffered damage in a fire that swept through numerous buildings in Cherokee, according to contemporary newspaper accounts. The fire consumed six adjacent wood-framed buildings, but the masonry and stone hotel survived.

When the hotel was advertised for sale or lease in March of 1909, it was described as having steam heat, electric lights, running water and fire protection on all floors, relatively cutting-edge features for a building of that era. The hotel, which had a parlor, reception hall and dining room, was the site of frequent celebrations, wedding receptions and other parties and meetings during the early-mid part of the 20th century.

The Lewis has undergone several renovations, attempted revivals and rehabilitations since at least as early as 1971, when the Des Moines Register reported a new owner, wanting to run a "tasteful, somewhat posh" hotel, plunked $46,000 into it and reopened it as the Hotel Sheffield. Another rehabilitation of the building was ongoing at the time of the NRHP application in 1997.

Documents in the NRHP application described the Lewis as "one of the most impressive buildings on Main Street in Cherokee" and "one of only a handful of three-storied buildings in Cherokee."

"Its brick and stone facades give a substantial emphasis to the west end of Main Street," the application said.

More recently, the building had suffered from the effects of age and, apparently, neglect. The Cherokee Chronicle Times reported in early 2018 that the city of Cherokee had cited the old hotel as a "Dangerous Building," due to plumbing that broke after being frozen, deterioration on a back wall, a leaky roof, mold and steps at the entrance that were deteriorating. The building's owner at the time, according to the Chronicle Times, no longer wanted the property and was unresponsive to city officials' attempts to get in contact.

SIOUX CITY -- Tommy Cooper, a southerner with decades of experience in newspaper circulation and in law enforcement, has been named the Journa…

Face your financial anxiety by reframing your relationship to money

How to cut the cost of preventative care

How to cut the cost of preventative care

These are the best tips and tricks for donating to charity

These are the best tips and tricks for donating to charity

How to make room for fun in your monthly budget

How to make room for fun in your monthly budget

Zachary Zoul plans to restore the historic Lewis Hotel in downtown Cherokee to its turn-of-the-century charm. The 122-year-old building at 231 W. Main St. is listed on the National Register of Historic Places.

The Lewis Hotel in Cherokee, Iowa, is shown in a postcard circa 1910. A new owner has purchased the historic building and is planning to breathe new life into the property.