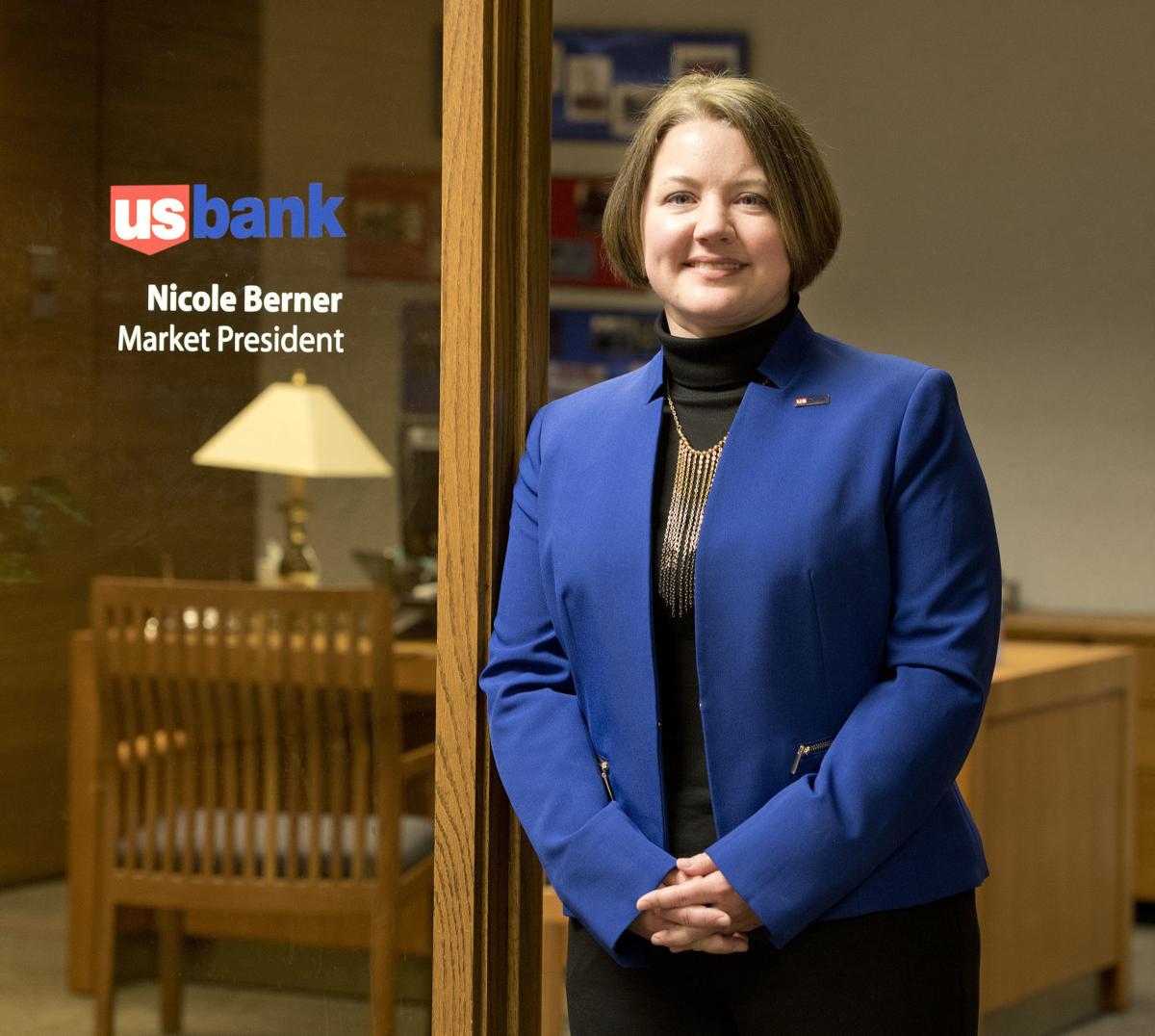 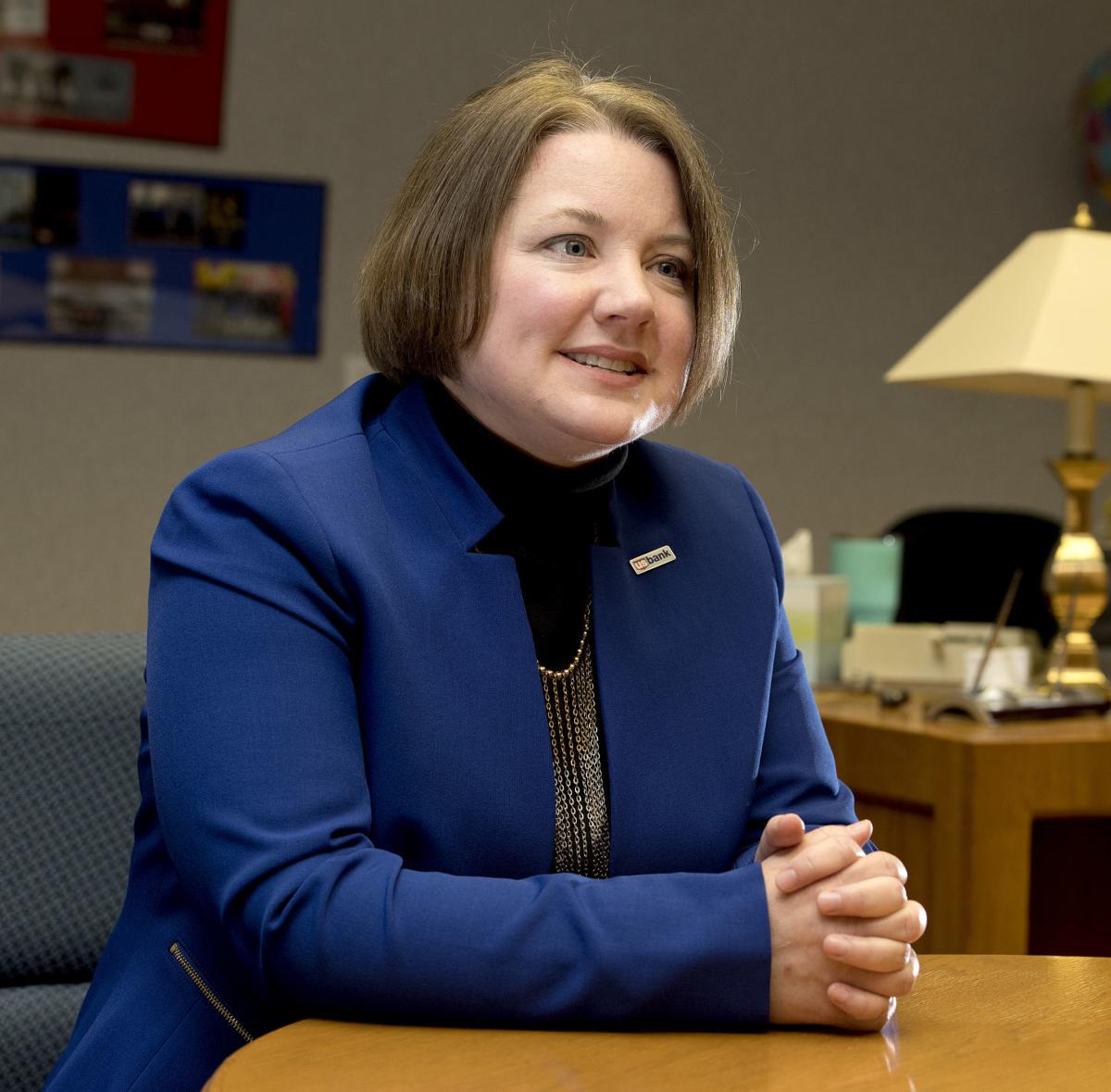 SIOUX CITY -- Nicole Berner didn't grow up wanting to be a banker.

Berner, 46, took over as Sioux City market president for U.S. Bank at the end of February. She's believed to be the first woman to head a major bank in Sioux City.

Sitting in her corner office at the bank's downtown offices, Berner said wasn't sure about her career path while attending the University of Nebraska at Kearney and later pursuing a master's degree at Wayne State College.

"I graduated from high school and I didn't know what I wanted to do, so I'm kind of jealous of those people who know right from the beginning what they want to do, because I didn't," said Berner, a native of Randolph, Nebraska and current resident of Belden, Nebraska.

At the suggestion of a guidance counselor in college, she added an education degree to her business administration degree "because you can always fall back on that, even if you don't want to teach."

Her first banking job at Wells Fargo wasn't her cup of tea, and for five years she worked in the office of a construction firm.

"It was kind of accidental, like I think a lot of bankers would say," Berner said. "I actually took a job at another bank right out of college, and I worked there for a year, and I didn't like it at all."

Wanting to grow her career, 19 years ago Berner saw a job opening for a credit analyst at U.S. Bank and applied.

"I was really skeptical about it, but went for an interview anyway, and it really sounded interesting," she said. In that role she evaluated the credit and financial position of customers.

She later became a relationship manager at the bank ("basically a commercial lender"), then a commercial team lead.

Now she is the face of U.S. Bank's three Sioux City locations. The role was formerly held by Darin Daby, who remains with the bank. He took on the responsibilities of wealth management for a large swath of the Midwest. Berner and Daby have both served in leadership roles for United Way of Siouxland.

As market president, she aims for U.S. Bank "to be the best bank we can be in Sioux City." She said the personal touch still matters in an era when many people carry their bank with them in their phones and don't visit the physical bank as often. The online presence is also very important.

"I think one of the things that we're really focused on is making sure we're in front of our customers, that they know who we are, that we're taking care of what they need, that we're helping them into the future," Berner said.

Even in a market with a lot of banking choices (U.S. Bank and its predecessors have been in Sioux City since the early 1930s), Berner said there's still a lot of opportunities for a bank here.

"Yes there is a lot of competition, but there's a lot of good things happening," she said of the community. "Lot of new projects and new businesses, so I think it's a good economy."

According to the International Monetary Fund, women occupy less than 20 percent of board seats in most banks. Berner said U.S. Bank is focused on getting more women into corner offices.

"I think that they are making a concentrated effort to make that happen, I just was up in Minneapolis yesterday with (U.S. Bank CEO) Andy Cecere, and that was specifically the topic -- they're looking to make (gender equality) the initiative, and they've been doing a good job already," she said.

Padmore named chair of United Way of Siouxland Board of Directors

WINNEBAGO, Neb. -- Some problems are good ones to have.

SIOUX CITY -- The movie theater in downtown Sioux City has made the transition to luxury recliner seating, alcoholic beverages and nontraditio…

VERMILLION, S.D. -- Starting next semester, there will be effectively no physical outlet to buy textbooks on campus at the University of South…

Jensen, a North High School graduate with a finance degree from the University of Iowa, has more than 15 years of banking experience in Sioux City. His responsibilities include management and oversight of the market area.

The complex includes a covered outdoor space for numerous vendors and an indoor space with classroom, test kitchen and offices. It’s located in the Ho-Chunk Village development adjacent to U.S. Highway 77 in Winnebago.