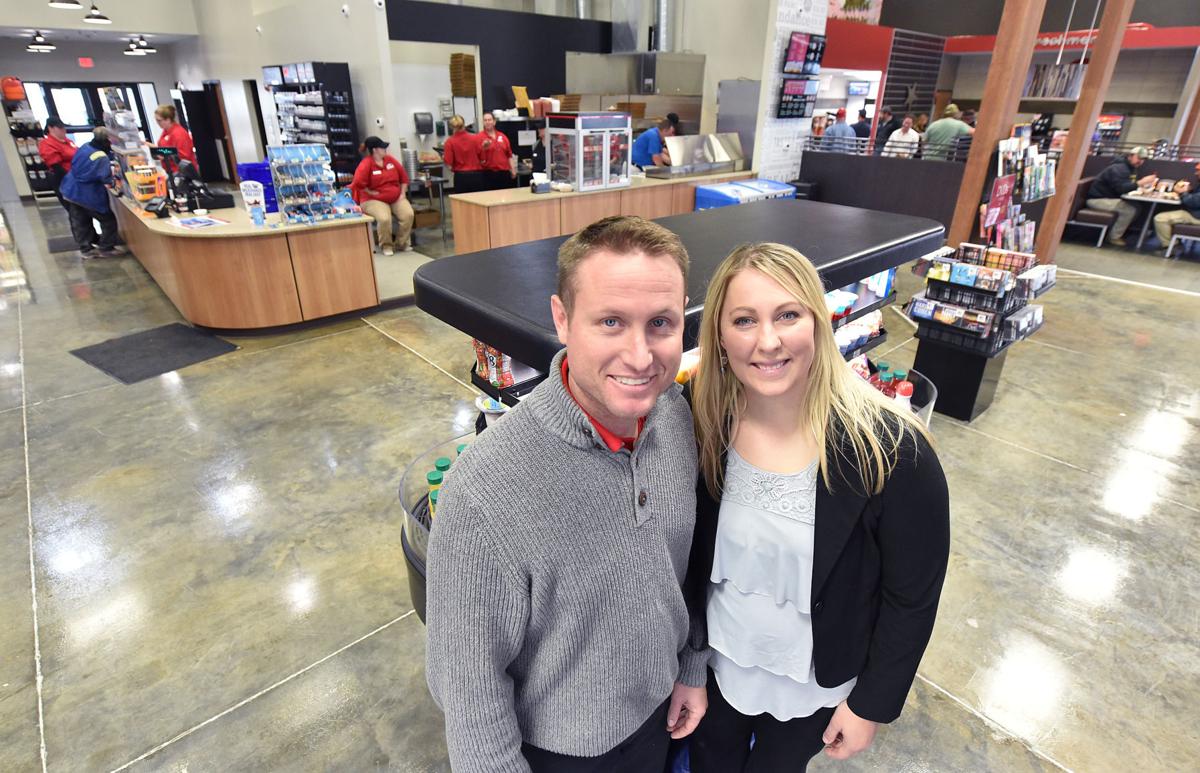 Director of operations Christopher, left, and controller Stacy Brown are shown Oct. 26 at the Holstein Travel Plaza, which opened last month at the intersection of US Highways 59 and 20 near Holstein, Iowa. The family also opened a Boulders hotel at the site last year.

The Holstein Travel Plaza, constructed to resemble an old-fashioned barn, is shown Tuesday at the intersection of U.S. Highways 20 and 59 near Holstein, Iowa. The travel plaza, which includes a Hardee's restaurant inside, opened last month. 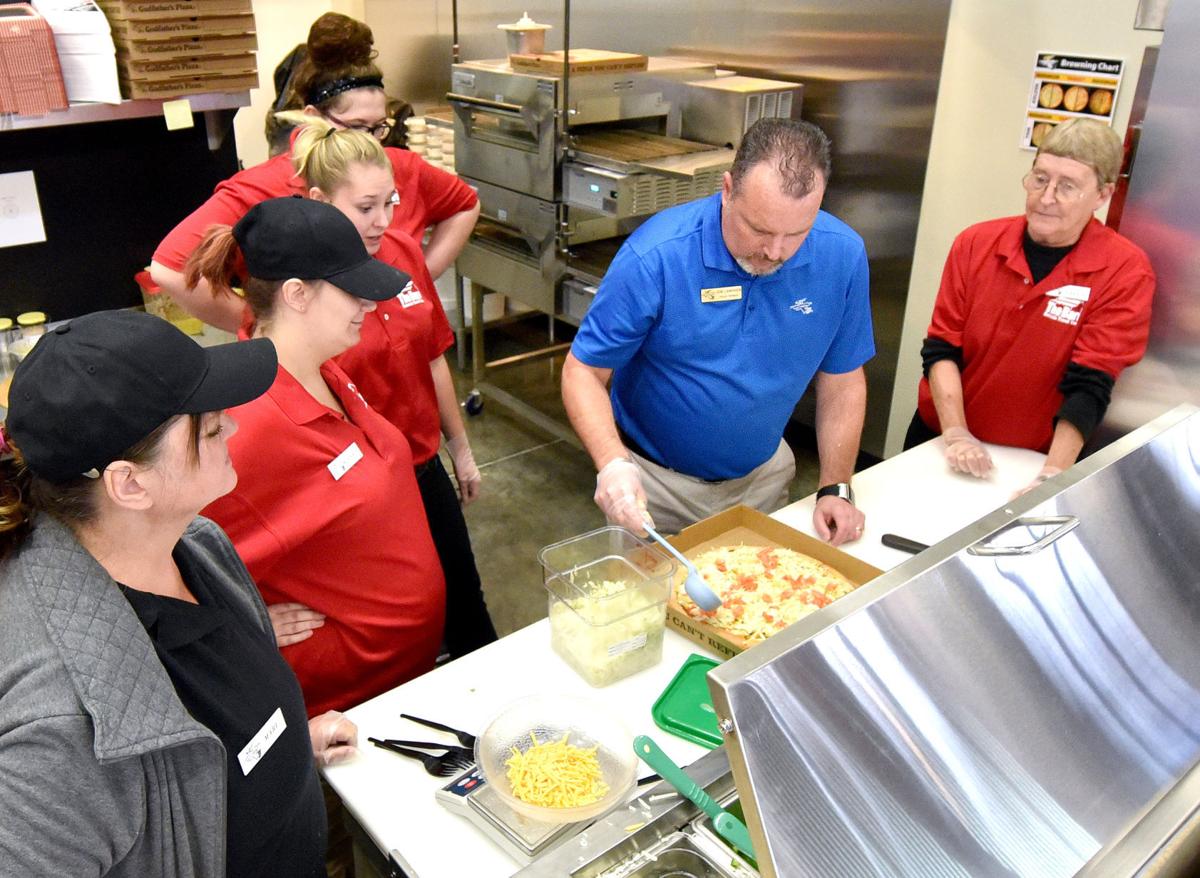 Godfathers Pizza field trainer Jon Lanphier, center in blue, show workers how to make a taco pizza Oct. 26 at The Holstein Travel Plaza, which opened last month at the intersection of U.S. Highways 20 and 59 near Holstein, Iowa.

"The Barn," also referred to as the Holstein Travel Center is shown in October 2016, just after it opened for business at the intersection of US Highway 20 and US Highway 59 at Holstein, Iowa.

HOLSTEIN, Iowa | Stacy Brown always wanted to come back to Holstein after college to raise a family. But what would she do if she came back?

Her parents, Brian and Deb Friedrichsen, and two brothers were operating the generations-old family farm. There had to be something else she could do in Holstein.

So began a brainstorm of some 50 entrepreneurial ideas while her husband Christopher and she lived away for 10 years when Christopher was in the military. They had met when both attended Northwestern College in Orange City, Iowa.

“It started about the year we got married, thinking about if we came back, what would we do?” said Christopher, a Southern California native.

“I’ve always wanted to come back here,” Stacy said. “My whole family lives here. We finally moved when Chris got tired of me asking,” and when perhaps the perfect business opportunity came along for Stacy’s hometown.

The widening of U.S. Highway 20 from two to four lanes was finally coming through Holstein as part of the last phase of the project that has taken six decades to connect the eastern and western borders of Iowa, from Dubuque to Sioux City. The new layout of Highway 20 was bypassing many towns, but not in Holstein, where it would remain on the south edge of town.

So why not sandwich the highway between the current town and a new development on the south side of the highway? It was the perfect location – the land was already owned by Stacy’s family.

A year ago, the family opened a 32-room hotel and conference center at the site. A 12,000-square-foot travel center, with the exterior resembling an old-fashioned barn, opened Oct. 12.

In 2011, hushed talks had already begun about the project. Stacy said at the time she thought people were joking.

But further thought showed Holstein was positioned well for the amenities.

Highway 20 bypasses every town from Holstein to Webster City, 96 miles to the east. Any available hotel is miles off 20. A Casey’s convenience station is at the Early exit, 26 miles east, and a Sparky’s gas station is at the Rockwell City turnoff 53 miles east, but they don’t necessarily meet the needs of truckers who want showers, laundry facilities and lounge areas. West of Holstein, the next major hotel and truck stops are 48 miles away in Sioux City.

The Browns pored over Iowa DOT traffic studies and commissioned their own studies. What they found was that as each new section of Highway 20 reopened as four lanes, traffic counts dramatically increased. DOT statistics of traffic counts completed every four years showed that from 2011 to 2015, there was a 67 percent increase in the number of vehicles going through the intersections of U.S. Hwys 20 and 71 at Early. The 29-mile four-lane phase from Early to the Rockwell City turnoff was completed in 2012.

Those numbers are projected to continue as the last phases from Early to Moville are completed in late 2018. So when the Browns moved back to Holstein in December 2014, the research continued and they began putting together an investment group of 30 local investors and investor entities. They purposely recruited local investors.

“The size of our investors wasn’t nearly as important as the location of our investors,” said Christopher, who now acts as the director of operations. “We wanted local families who will be involved for generations. We want local people to have an investment in their community.”

The Browns took a drive to eastern Iowa and visited truck stops. They learned people want the truck and car traffic as separate as possible, large turn-around areas for trucks, ample parking for cars, open 24 hours, fast food and hot food, and clean restrooms and facilities.

At about the same time, talk began of building a Boulders Hotel and Event Center, part of a chain of 10 Boulders Inn and Suites hotels in mostly Northwest Iowa.

And so began a project that started as 20 acres of economic development on the south side of Highway 20, but eventually turned into 50 acres. The site was voluntarily annexed by the city, and the city provided street, water and sewer to the site. The city also received a Revitalize Iowa’s Sound Economy (RISE) grant from the DOT, with the stipulation that the development would have no residential component.

City leaders, seeing other growth already in Holstein, were eager to welcome the development.

“We are very excited about it,” Holstein Mayor Connie Ludvigson said. “One of the things we want is for travelers to slow down to see Holstein. We understand communities are at a break – either grow or get left behind. We are determined to grow.”

Ludvigson said Stacy Brown has always known what value there is the Holstein area.

“They want to enhance and improve,” Ludvigson said. “With their addition, we hope to be one of the surviving communities. We are hoping to meet the needs of a new demographic.”

A seed shed opened first in the development. Boulders, a 32-room hotel and conference center large enough to hold 200 people seated at tables, has been open a year and quite often near capacity with Highway 20 contractors staying at the hotel. Catering may be brought into the event center. The hotel has a liquor license and staff provide bartenders and set-up.

The truck stop is deliberately named the Holstein Travel Center, trying to get away from the notion it’s only for truckers, Ludvigson said. Holstein businesses will be invited to submit commercials to play on a loop on a TV at the travel center to attract visitors to drive into town as well.

Aesthetic features include exposed wood trusses and wood siding on the pitched ceiling. Showers and laundry facilities are available for truckers, as well as a mezzanine lounge area with couches and a TV.

The Browns were determined to attract a fast food franchise, but were surprised so many turned the down. However, Hardee’s was excited from day one, Christopher said. The Hardee’s features a full menu and a drive-through. Although the travel center is open 24 hours, Hardee’s is open 6 a.m. to 10 p.m.

The Godfather’s Express has a limited pizza, calzone and monkey bread menu, but more menu items may be added. The Browns chose not to offer broasted chicken because they don’t want to compete with what other businesses in the town are already doing well, they said.

It’s a pledge that carries throughout the travel center. Stacy, who acts as accounting controller for the investment properties, researched what other businesses offered in town and looked to fill the voids, rather than duplicate. The travel center’s gift shop area offers greeting cards and gift wrap (not readily available in Holstein since the pharmacy closed), several gift items for adults and children, farm toys, baby boutique items, home décor and milkhouse candles.

Stacy is most excited, she said, to install a static agriculture education exhibit.

“When we lived in Jacksonville, Fla., and near Dallas, Texas, it was amazing and appalling to me what people think happens on farms,” she said. “So this is our chance to get a good educational message out there.”

The Ida County Cattlemen’s Association is designing hats and T-shirts with an eat beef theme to be sold. There is also room in the travel center to display an antique tractor or car.

Outside, Cenex gas pumps offer blender pumps for E85, E30 and E15. In the back, in addition to diesel for trucks and semis, there is also dyed diesel for farm machinery.

With 50 full- and part-time employees at the travel center and 12 employees at the hotel, Holstein and Ida County have seen the advantage of job creation through the development. A Dollar General is slated for construction soon. The Browns are looking for more tenants for the development. Meanwhile, they are hoping to relocate a five-bedroom farmhouse on the property.

The opening hasn’t been without a few hiccups, Stacy said. “But those were things we weren’t going to know until we opened.”

One surprise has been some of the busiest hours are midnight to 3 a.m., where there are shift changes at nearby VT Industries in Holstein and the Quad County Corn Processors ethanol plant in Galva.

Ludvigson said city leaders are pleased to see the Browns’ entrepreneurial ventures are sparking more entrepreneurship in town. In the last 18 months, four new businesses have opened in Holstein, and even more noteworthy, all owned by women. Three of the four women are Galva-Holstein High School graduates. The fourth woman married a Galva-Holstein graduate.

“How awesome is that?” Ludvigson said. “These younger folks are coming back because they see the value and opportunity too.”

A grand opening at the Holstein Travel Center will be Friday and Saturday. Gift cards will be given away, as well as Cenex and Hardee’s product discounts.

Don't get scammed out of your retirement

CF: Port Neal plant in process of starting up

DES MOINES | Saying they need to see more progress, members of the state’s economic development board said final approval of $14 million in ta…

A $3 million incentive package for Wells Enterprises in Le Mars was among three Northwest Iowa business expansion projects that were awarded state financial assistance Friday by the state’s economic development board.

Director of operations Christopher, left, and controller Stacy Brown are shown Oct. 26 at the Holstein Travel Plaza, which opened last month at the intersection of US Highways 59 and 20 near Holstein, Iowa. The family also opened a Boulders hotel at the site last year.

The Holstein Travel Plaza, constructed to resemble an old-fashioned barn, is shown Tuesday at the intersection of U.S. Highways 20 and 59 near Holstein, Iowa. The travel plaza, which includes a Hardee's restaurant inside, opened last month.

Godfathers Pizza field trainer Jon Lanphier, center in blue, show workers how to make a taco pizza Oct. 26 at The Holstein Travel Plaza, which opened last month at the intersection of U.S. Highways 20 and 59 near Holstein, Iowa.

"The Barn," also referred to as the Holstein Travel Center is shown in October 2016, just after it opened for business at the intersection of US Highway 20 and US Highway 59 at Holstein, Iowa.