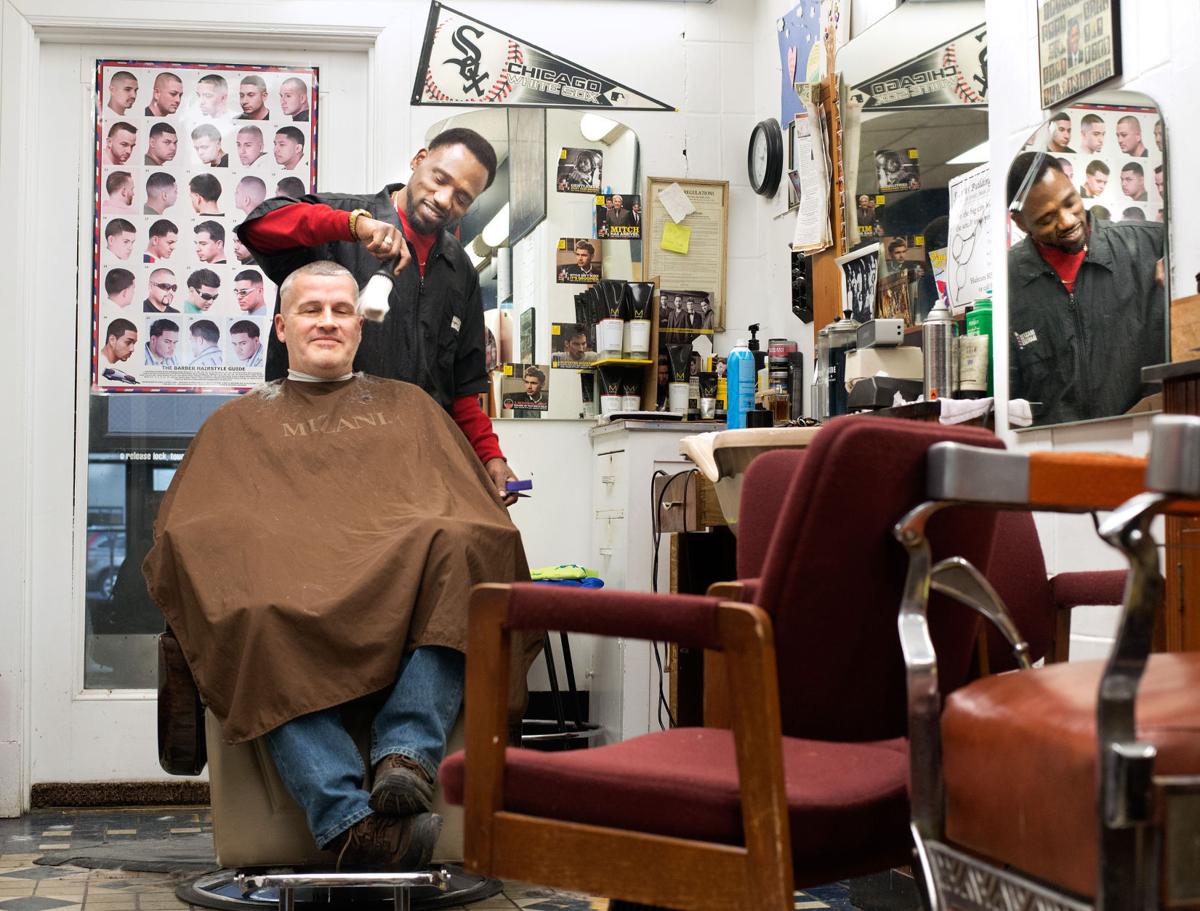 Clyde Shinall, owner of Frances Building Barbershop, gives Tom Leonard of Sioux City a haircut on Feb. 14. Shinall, a 47-year-old Chicago native, has developed a loyal clientele over the years, attracting customers from around the tri-state region. 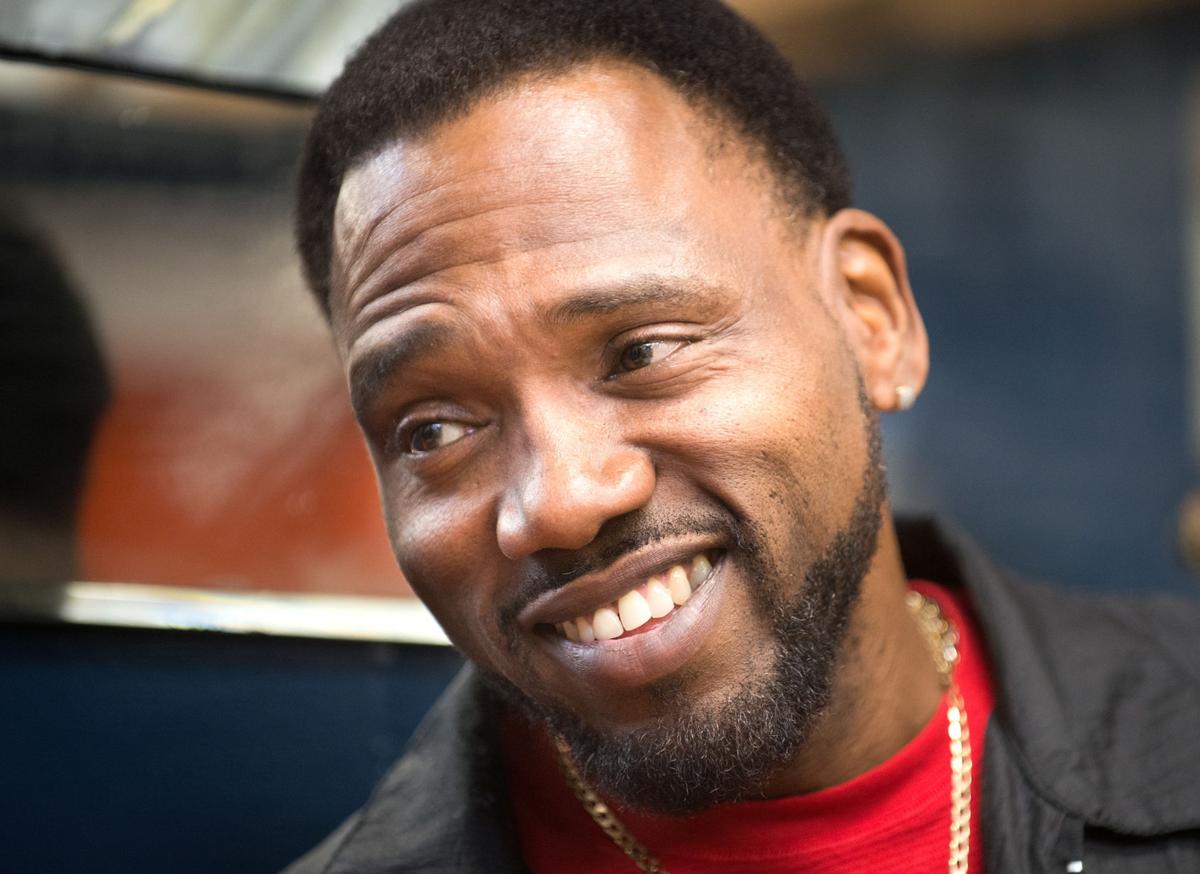 Clyde Shinall, owner of Frances Building Barbershop, smiles during an interview in Sioux City on Feb. 14. Shinall is among a small number of black business owners in metro Sioux City. 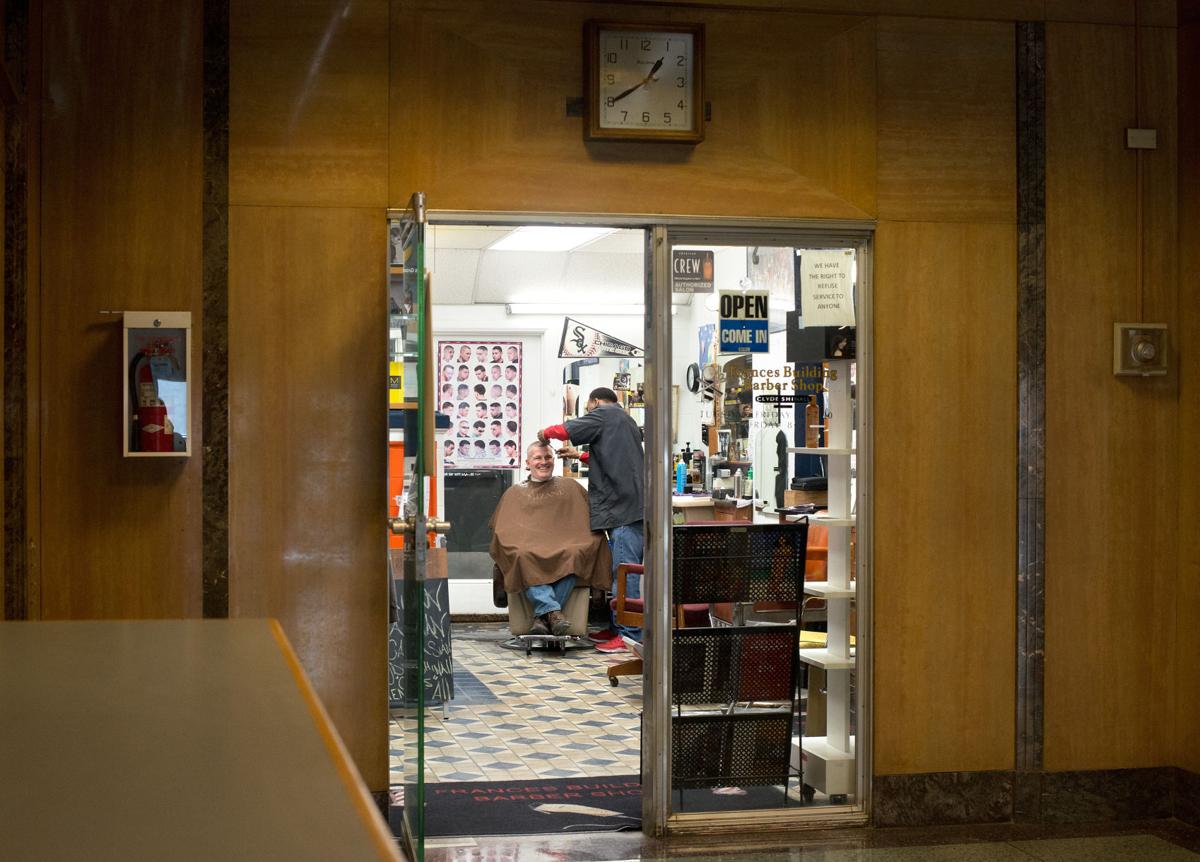 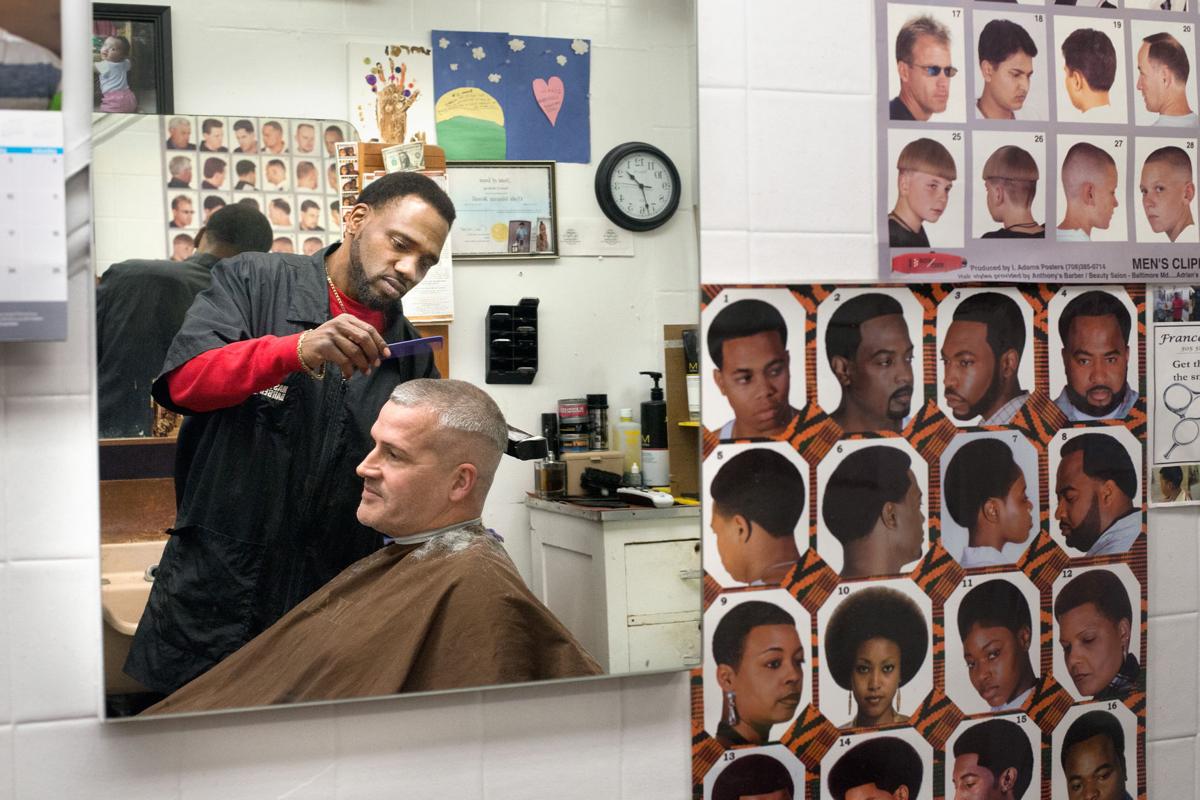 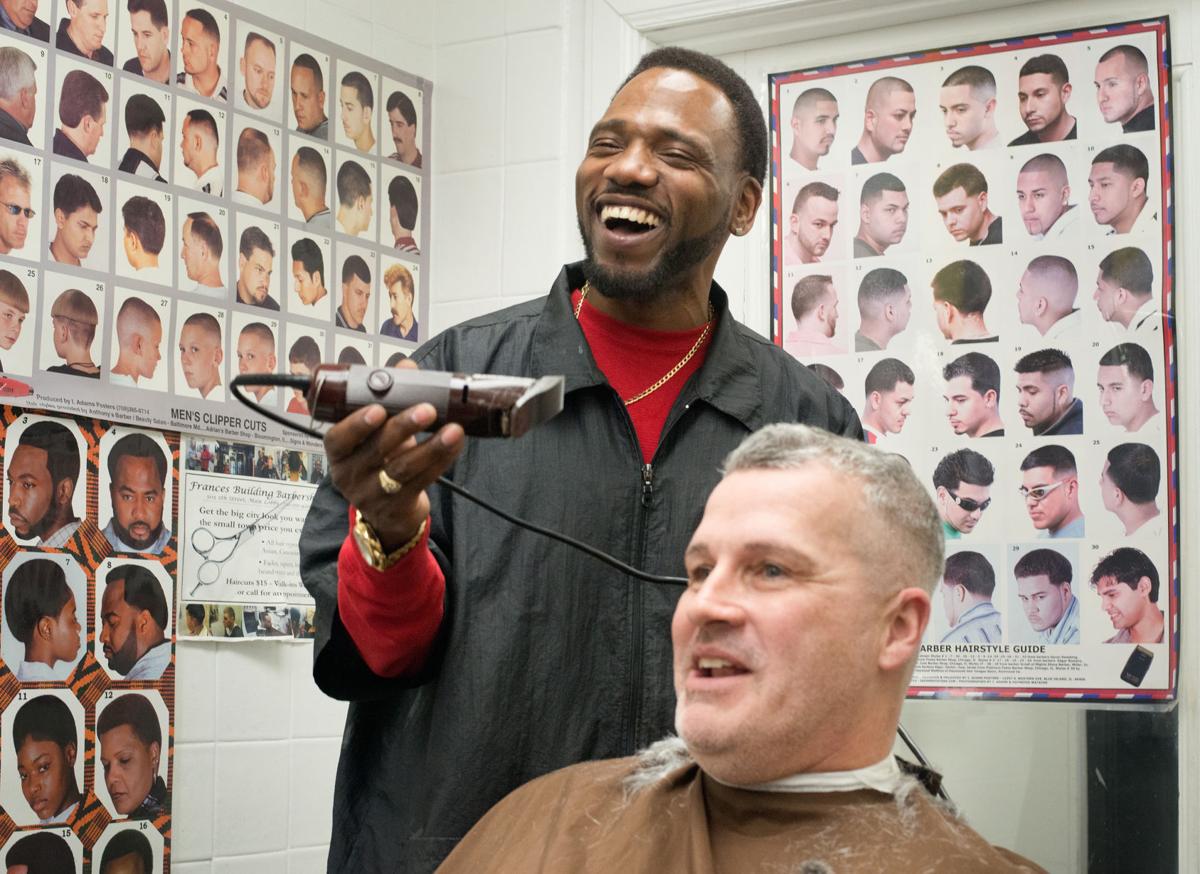 SIOUX CITY — Where am I going to get my hair cut?

This was something that was on my mind heavily when I decided to move to Iowa four years ago after being offered my first journalism job in Newton. Thankfully, I found out there were a handful of black barber shops in Des Moines, which was only 30 minutes away.

One of the challenges of being a person of color in a place where there aren’t many people that look like you is finding a barber or beautician that understands the challenges, uniqueness and style preferences that go along with working with black hair.

Due to this obstacle, I found my last two barbers in Iowa before I even looked for a place to live.

Before I moved to Sheldon, Iowa, a little more than two years ago to work for The N’West Iowa Review — the weekly paper I worked for prior to joining the Journal staff in late November — I had already contacted my current barber, Clyde Shinall.

For two years, I drove an hour each way from Sheldon to visit Clyde's shop, but I'm not the only person — regardless of race — who is willing to travel for a cut.

Clyde said his clients come from as far as Sioux Falls and Vermillion in South Dakota; Omaha and Wayne in Nebraska and some drive from even farther distances than Storm Lake, Iowa, itself a three-hour minimum round trip.

Obviously, Clyde is aware of how important it is for a large percentage of black people to get their hair cut by a black barber, but that’s not what inspired him to open his shop here.

“I looked up Sioux City and I knew they didn’t have too many barbers down here, no barber colleges, no barber things, so I knew barbering was going to be the thing to do,” he said. “Plus, barbering is a dying field and since it’s dying, what better place to come and make it happen?”

After deciding to start his career in Sioux City, Clyde’s next challenge was to find a location for his shop. Fortunately for him, around the time he was looking the previous owner of the Francis Building Barbershop, which dates back to 1919 when the building opened, was planning to retire.

Clyde met with the previous owner, who liked him so much he gave him a sweetheart deal on the shop and provided him an extensive client list that contained a who’s who of Sioux Cityans he built over decades.

One of Clyde's dozens of regulars is Tom Leonard, a Sioux City fireman, who has been coming to the Francis Building Barbershop for more than 20 years. Tom told me he loves the conversations with Clyde, who isn't short on opinion no matter the subject, and he enjoys his cuts as well.

"I get the same cut and he knows how I want it," Tom said.

Since taking over the Francis Building Barbershop eight years ago, Clyde said things have been great, although there is one misconception he’s worked to clear up about black barbers.

To hammer his point home, his shop’s slogan is, “African, Asian, Caucasian: Clyde Shinall Cuts Them All,” which he proudly keeps on display on a chalk sandwich board outside the shop's entrance.

Getting to know Clyde piqued my curiosity and made me want to learn more about the black business community here in Sioux City, where blacks make up a little less than 3 percent of the population.

According to U.S. Census data, there are 5,904 businesses in Sioux City. Of those, 781 are owned by minorities, although it doesn’t break that figure down into racial/ethnic sub-groups.

However, through Clyde, I became familiar with a few other black-owned business in town and I decided to learn more about them.

Pepe’s Hair Braiding & Beauty is a beauty shop/hair products store that specializes in black hair. From what owner Pepe Eviglo and I have gathered, her shops seems to be the only black beauty shop in Siouxland.

I first heard of Pepe’s shop when some friends of mine in Orange City, who happen to be white, asked me if I could help them find a place where they could take their adopted daughter from Ethiopia to get her hair done.

Pepe opened her hair salon on 2900 Gordon Drive four years ago. The 30-year-old arrived in the U.S. 17 years ago as a refugee from a West African nation and has been in Sioux City for most of that time.

She was inspired to start her business after years of struggling to find certain hair and skincare products in major retailers tailored specifically to people of color, and because she found it difficult to get her done professionally.

Similar to Clyde’s business, people of color come from all over to Pepe’s for braids and sew-ins, or to buy wigs, extensions, specialty lotions, soaps and hair products. However, she also is familiar with other hair types and works with a diverse clientele base.

“We welcome everybody,” Pepe said. “We want you to keep coming back, so when you come, we try our best to serve you and make you feel comfortable so you can come back. My clients always appreciate what we do here, so they’re always coming back.”

To gain a better historical perspective of Sioux City's black business community, I reached out to Jim Tillman, owner of JT Media productions and creator of the Sioux City Black History Mini-Doc series.

Jim, 58, grew up in Sioux City, but can't recall there being a large amount of black-owned businesses in town, noting that a lot blacks here worked in the meatpacking industry.

He remembers a lounge, occasional restaurants, a dentist and a few barber shops that have come and gone, but not much else.

Although there isn't a strong legacy of black entrepreneurialism in Sioux City, Jim wants to try and change that with the next generation.

He puts on a youth media producers after-school program at the Sanford Center for elementary school-aged children. Jim teaches them about history, video production and other technical and creative skills, while also bringing in professional guest speakers to expose them to various career options.

Another black transplant I spoke to who has done well for himself in Sioux City’s business community is Angelo James. The 56-year-old moved to town 23 years ago to start his own State Farm Insurance and Financial Services Agency and said it’s been a great experience.

“I worked for State Farm for six years as a claims adjuster and they gave me an opportunity and I just took it,” he said.

When Angelo initially told his family of his intention to set up shop in Sioux City, he said they had a lot of thoughts.

“The statement I got from my family was: ‘Well, there’s not a lot of people like you up there, are you sure you are going to find enough people to be in business?’” Angelo said. “Well, people do business with people who care and I care about Siouxland.”

Angelo said he has been active in the community and has served on boards of numerous service organizations, including the Boy & Girls Home, the Lion’s Club and the Sanford Community Center to name a few. Through those interactions, he’s gotten to know the community well, which in turn has helped his business thrive.

Although he isn’t aware of any other black insurance agency owners in wWestern Iowa, Angelo said his race has never been an issue at work. When I asked him what does he think can be done to recruit more black youth into his profession, his advice basically boiled down to not being afraid to take risks.

“I’ve found Sioux City, in general, to be very open-minded to anybody who’s interested in doing something,” he said. “I really enjoy working with the people of Siouxland — I’m licensed in three states, which is Iowa, Nebraska and South Dakota — and I think there’s a lot of times of people fearing the unknown more than anything else.”

As the Journal's business beat reporter and as a black man, learning more about the black business community was a fascinating experience for me, especially considering that I was able to do it throughout February, when the nation annually celebrates Black History Month.

And to think, it all came about because of a question concerning a haircut.

Entrepalooza 2017 set to kick off

SIOUX CITY — Historically, Sioux City has had a low rate of business starts, something the 20 local sponsors behind Entrepalooza want to impro…

SIOUX CITY — As Kaleb French explained to me how the 3-D printer at his job works, I couldn’t help but feel a bit overwhelmed at how technical…

62 years of barbering: 'I love what I do,' longtime Sioux City barber Jack Berger says

SIOUX CITY -- Saturday morning, the fourth generation of the May family -- a young boy called J.D. -- got his hair cut by John "Jack" Berger, …

Clyde Shinall, owner of Frances Building Barbershop, gives Tom Leonard of Sioux City a haircut on Feb. 14. Shinall, a 47-year-old Chicago native, has developed a loyal clientele over the years, attracting customers from around the tri-state region.

Clyde Shinall, owner of Frances Building Barbershop, smiles during an interview in Sioux City on Feb. 14. Shinall is among a small number of black business owners in metro Sioux City. 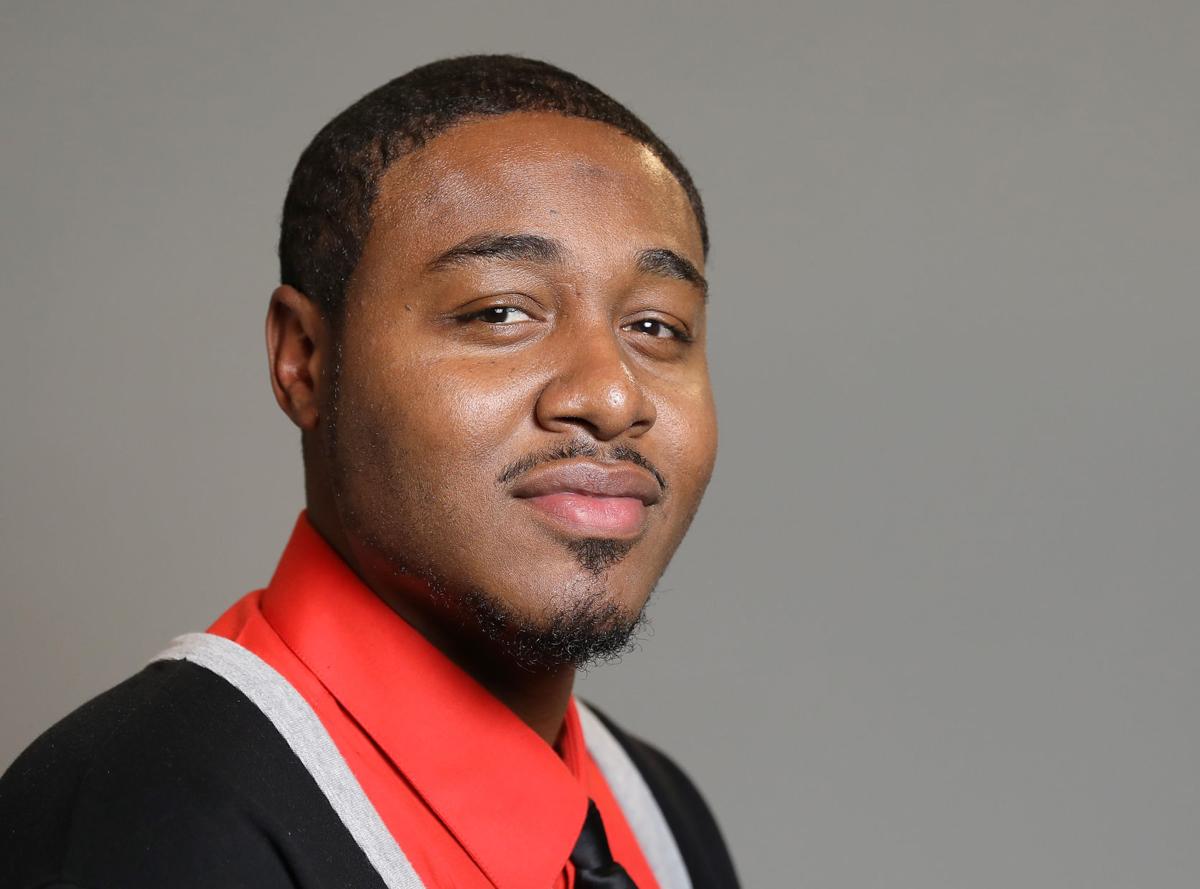