TNF: Scores and updates from Patriots vs. Bills

SIOUX CITY — Every year, when Thanksgiving is fast approaching, the Siouxland Soup Kitchen relies on people donating food items so it can put together a robust meal for the holiday.

This year, the need only grew larger.

"We got 29 turkeys donated to us from a group in Nebraska. So without them we probably would not have a traditional Thanksgiving menu," said Lyn Armentrout, executive director of the Siouxland Soup Kitchen.

The non-profit is far from the only area organization thankful for whatever donations it can get for November as higher prices for holiday staples such as turkey are making meal planning more difficult for folks across the tri-state region.

According to survey results from the American Farm Bureau Federation, the average cost of a Thanksgiving meal for 10 people is at $64.05 which is up more than $10 from 2021.

One major driver of the upward swing is the price of turkey.

Less than a week until Thanksgiving, a weekly flyer for the Fareway grocery store on Sergeant Road in Sioux City shows a store-brand, bone-in turkey breast is $1.98 a pound with birds averaging between 5 and 7 pounds. The cost for a store-brand, frozen and basted tom turkey at the Gordon Drive Hy-Vee is $1.69 a pound. Aldi's flyer listed a Kirkwood bone-in turkey breast for $1.89 a pound.

In Iowa, Mike Naig, the state's secretary of agriculture, has said this year's waves of avian flu can be partly blamed for the fowl price fluctuations.

"Because of the reduction in production because of high pathogen (avian influenza) and these other inflationary issues, folks can certainly expect to pay more for turkey this year," Naig told the Cedar Rapids Gazette's Tom Barton earlier this month. The Associated Press has reported that Iowa has had 15 commercial farms infected this year, including turkeys, egg-laying hens and other chickens. Bird losses have totaled more than 13.3 million this year, according to AP.

"The thing that we did find with just turkey specifically this year, is we usually get offers in between March and May. And this year we didn't even get solicitation requests to purchase them," Food Bank of Siouxland Executive Director Jacob Wanderscheid said.

With that, Wanderscheid said the Food Bank of Siouxland, which reports to serve more than 25,000 food insecure people, is honing in on traditional Thanksgiving meal side items such as stuffing, potatoes, cranberry sauce and a number of other canned goods.

Siouxland food banks expecting more people to use their services

Fitzgerald Grant, executive director for the Sanford Center, said the community organization is taking the opposite approach in helping put together Thanksgiving meals for folks.

"We rely on donations to do this. So if you’re getting the same amount of donations every year, but the price is going up then you can't give everybody the same thing. So what we decided to do was: 'Let's just do the turkeys.'"

Grant said the Sanford Center, which has been around since the 1930s, initially aimed to acquire 200 turkeys and redistribute them but then planners opted for 150 in case shortages were too great.

"We’re thankful we’re able to adjust to meet some of the needs of the people in this community. Whether it be giving a Thanksgiving turkey, or working with kids in our before-and-after school program, we’re thankful that we’re able to still do that," he said.

When the Gospel Mission opens its doors for hungry people at noon on Thanksgiving Day, Executive Director Paul Mahaffie said they won't be wanting for anything.

"We’ll have all the fixings: Turkey and ham and mashed potatoes and gravy and sweet potatoes, dressing, the green bean casserole, desserts, all served right at the table. They don't have to go through a buffet line."

By Mahaffie's count, the Gospel Mission could serve as many as 500 on Nov. 24 between its noon and 5 p.m. meals, which is up from previous years. He then added: "We used to supply 25 families a day with food in our pantry, we're up to 70. And even our shelters are full up. The need this year is definitely up. Without a doubt."

Asked why its important for Gospel Mission to continue to work as hard as possible to help people, even when demands are rising, Mahaffie said he wants people to know his organization cares.

"We all got many things to be thankful for, even if things aren't perfect," Mahaffie said.

On the menu at the Soup Kitchen there will be turkey, potatoes and gravy and green beans as well as pecan and pumpkin pies.

"We have a smaller menu," Armentrout said.

Even more than what the menu will look like, Armentrout said she worries about how such spikes in prices are hurting low-income people who are already struggling financially.

"When we have extras, whenever we can, we put it out on our free shelves for people to take. We do probably 50/50 with homeless and low-income families so when we have extra stuff that we can’t use, they take it home and use it," she said.

To her, that kind of giving back, especially during the holidays, is the least her organization can do.

"We can't solve all the problems but we can put a smile on people's faces by giving them a hot meal."

Homelessness among older people on the rise

The Siouxland Soup Kitchen, directed by Lyn Armentrout gets ready to carve turkeys and for Thanksgiving.

For nine years now, a group of volunteers has served Thanksgiving dinner at Salem Lutheran Church in rural Correctionville, offering a free holiday meal to anyone who's alone and has nowhere else to go to celebrate the holiday. 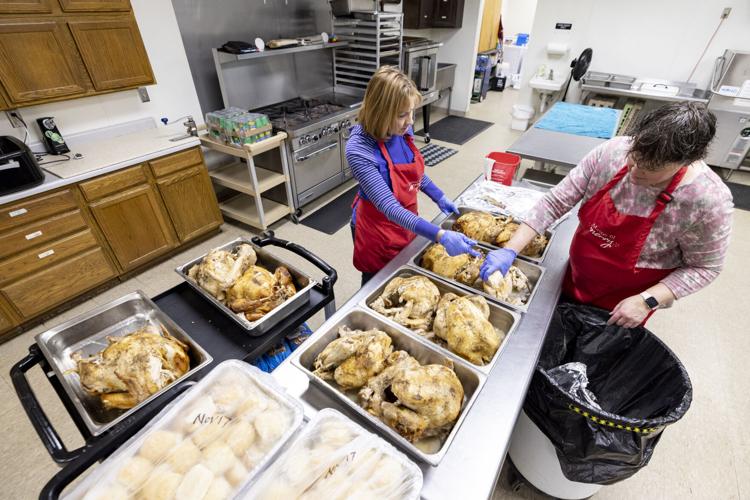 Lyn Armentrout, left, and Jenni Wood, right, prepare slow-cooked turkeys for carving at the Siouxland Soup Kitchen as they get ready for Thanksgiving dinner. 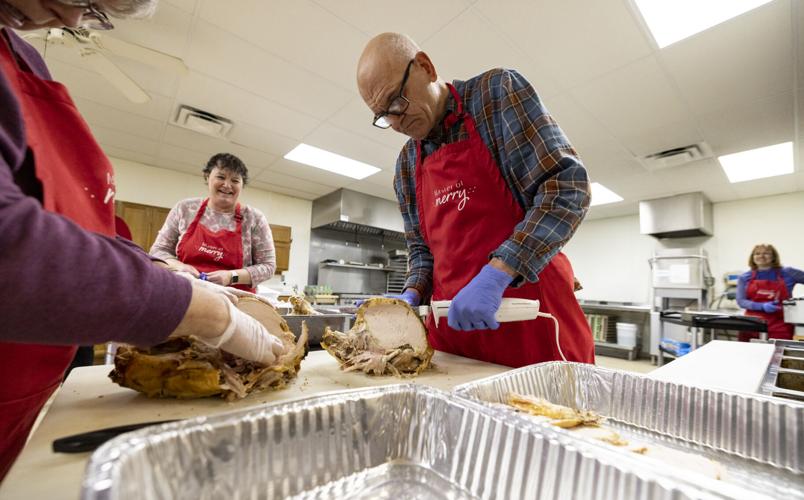 Dar Hurni, center, and his wife Bev Hurni, left, volunteer their time to carve turkeys at the Siouxland Soup Kitchen. 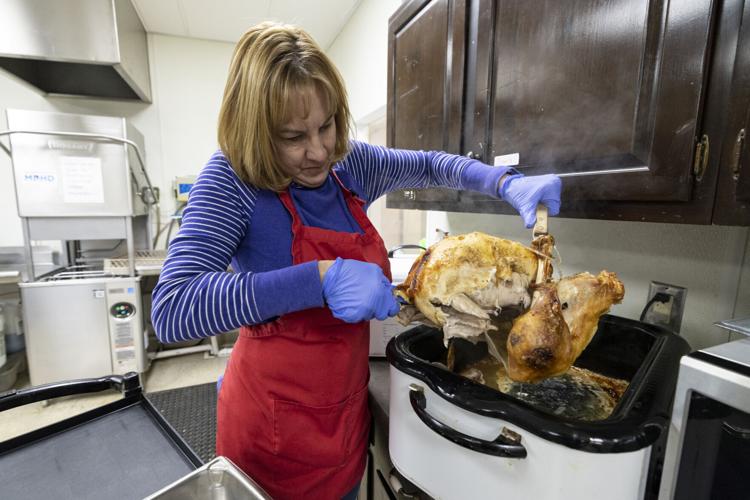 Lyn Armentrout, director of the Siouxland Soup Kitchen, removes a turkey after four hours in a slow cooker in preparation for the Soup Kitchen’s Thanksgiving dinner. 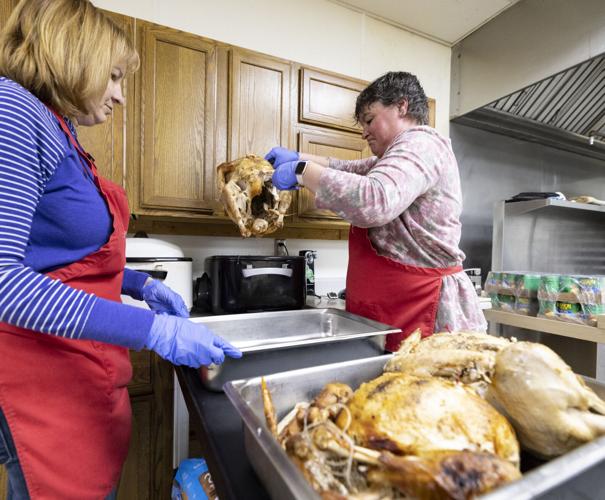 Jenni Wood, kitchen manager at the Siouxland Soup Kitchen, removes a turkey after four hours in a slow cooker. 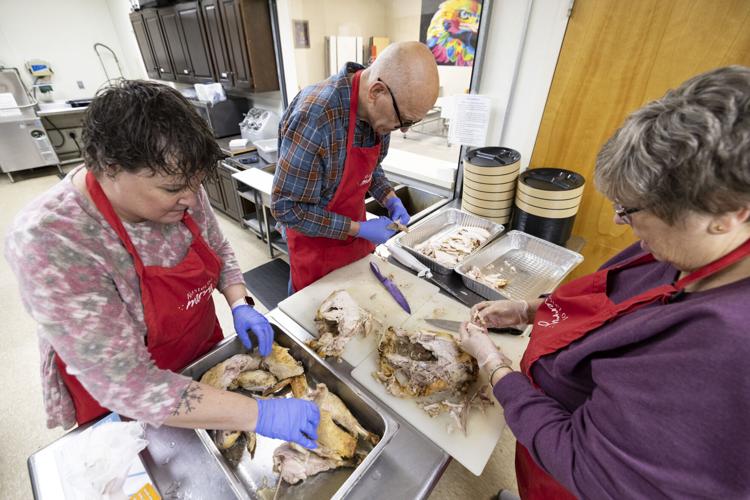 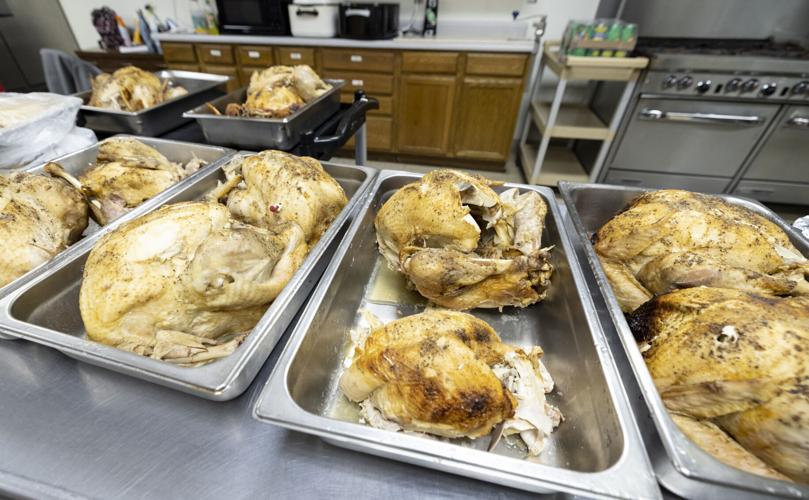 Slow-cooked turkeys cool before being carved for Thanksgiving dinner at the Siouxland Soup Kitchen.