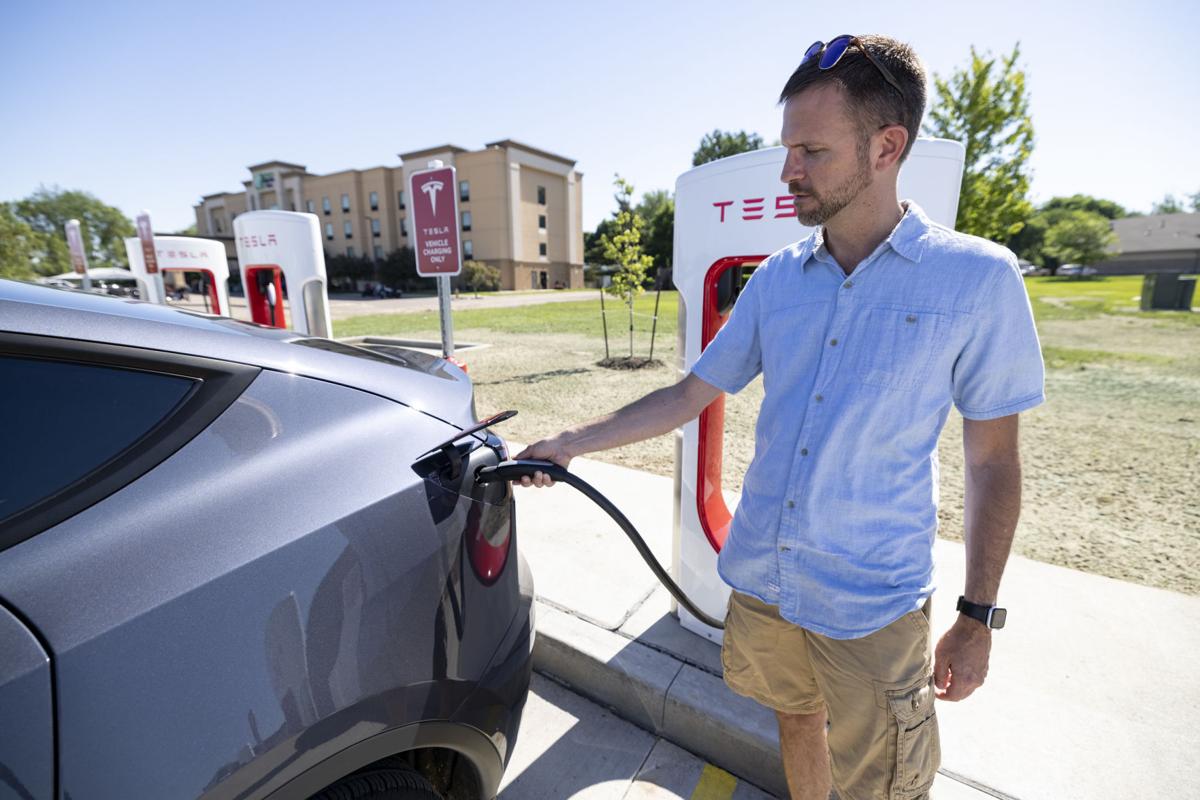 Frank Bulk plugs in his Tesla Model Y at the new Tesla Supercharger in Sioux City on June 5. The electric vehicle maker installed its first station in Sioux City last month near the Casey's General Store at 4727 Southern Hills Drive. 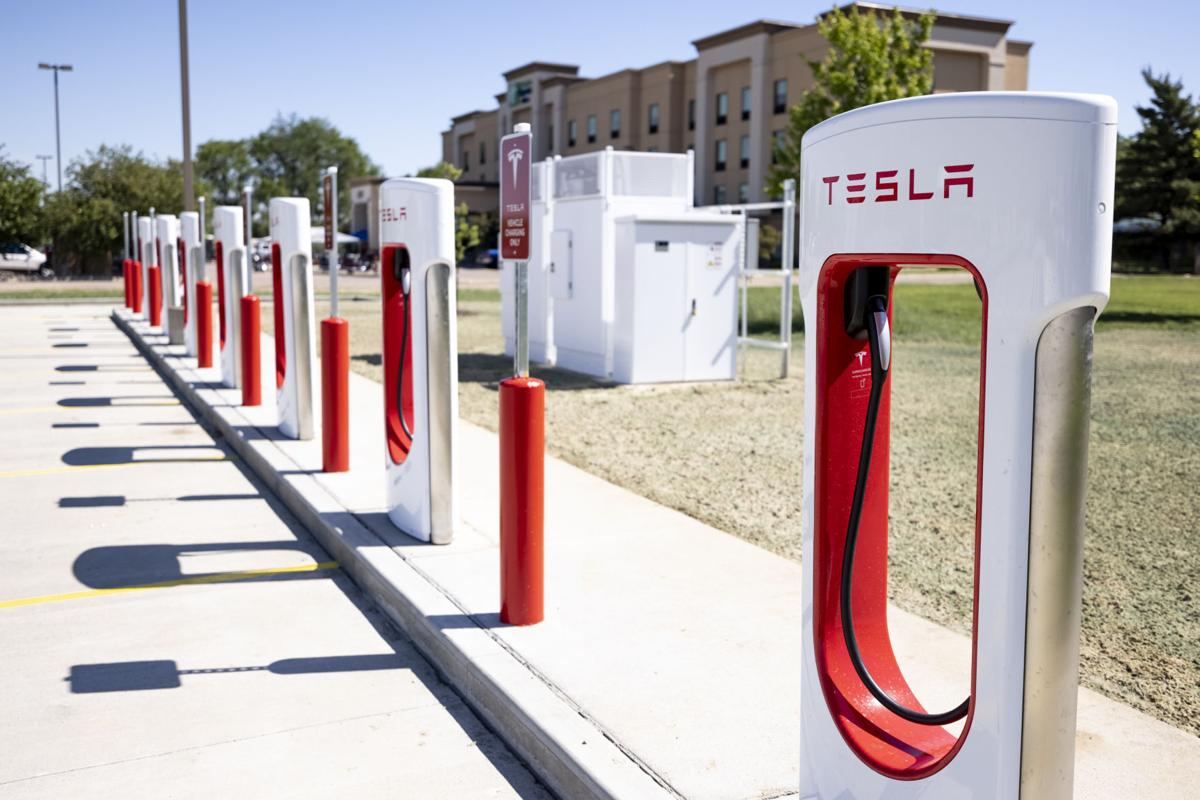 A bank of Tesla Superchargers is now open for service on Southern Hills Drive in Sioux City on June 5. 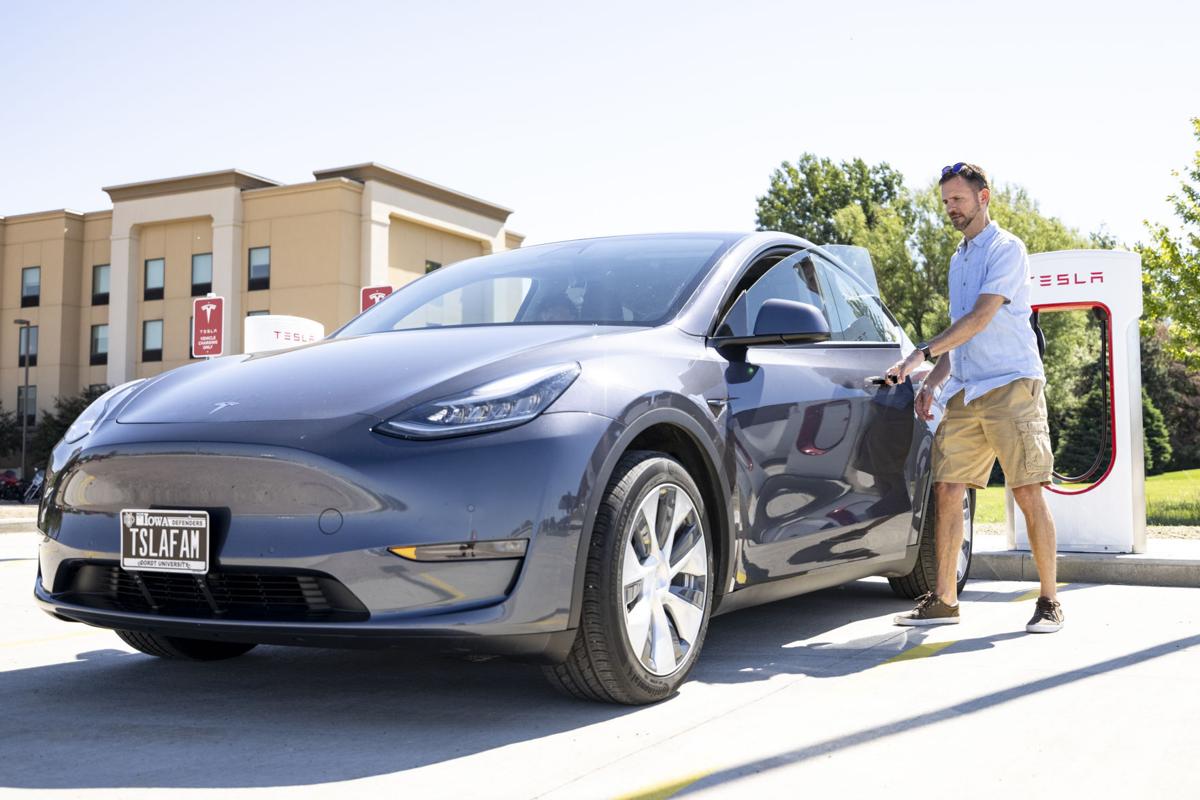 Frank Bulk gets into his Tesla Model Y after charging his car at the new Tesla Supercharger in Sioux City on June 5. 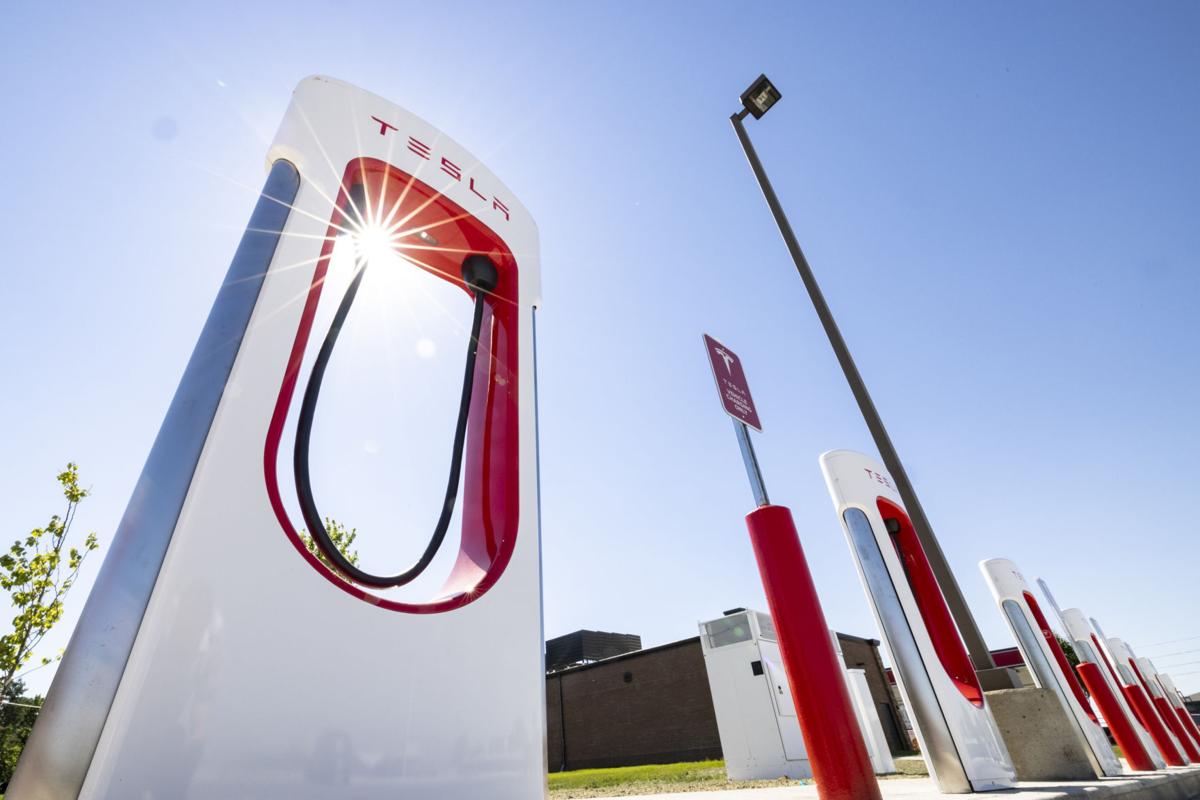 A bank of Tesla Superchargers is now open for service on Southern Hills Drive. 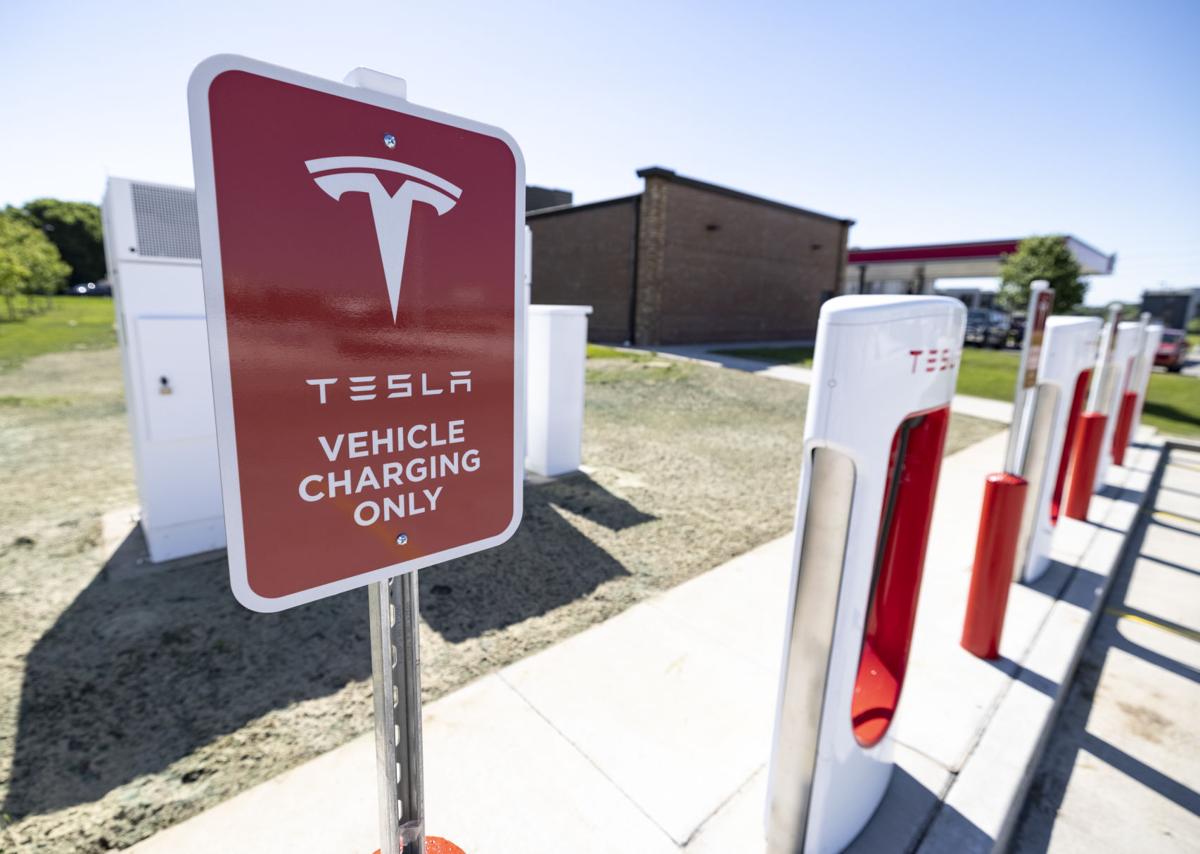 A bank of Tesla Superchargers is now open for service on Southern Hills Drive in Sioux City, Iowa, Saturday, June 5, 2021.

Today, Woodbury County has 20 registered Teslas, double the number of just two years ago, while all other counties in the region have at least a handful of them, according to Iowa Department of Transportation data. Dickinson County, for instance, has 10. Plymouth County has seven.

Tesla, headed by the noted tech entrepreneur Elon Musk, became the dominant force of the electric-vehicle market during the last decade. The company's electric vehicles have a reputation for a comfortable, luxurious, fast, high-tech, low-maintenance ride.

A Tesla supercharging station opened along Southern Hills Drive, adjacent to the Casey's General Store at 4727 Southern Hills Dr., late last month. The station has eight superchargers, each capable of up to 250 kilowatts of power. Normally, a Tesla at one of these chargers would be good to go after 15 or 20 minutes, depending on how full or drained the battery is.

Or, put another way, these devices are capable of charging at a rate of up to 1,000 miles per hour. (This is not the same concept as the speed measurement, but rather an indication of how many miles an electric car could theoretically travel if it had a sufficiently large battery and were left charging for an hour. The speed at which an electric vehicle charges in the real world varies, based partly on how drained the battery is.)

Most Teslas have a range of somewhere between 250 and 400 miles on a full charge, depending on the model.

The Southern Hills Drive station is the sole Tesla supercharger in Northwest Iowa, though electric vehicle chargers from other companies have been in the area for years. Many of these are so-called "Level 2" chargers, which juice the battery at a slower rate -- they can take several hours. Still, the Level 2 chargers are much faster than wall outlets, the slowest way of powering an electric car.

Only Tesla cars can be charged at a Tesla station, as other electric vehicles are incompatible with the equipment.

There are comparable DC fast chargers (another name for a supercharger) in the metro, among them the Greenlots-brand charging station installed by MidAmerican Energy at the Kum & Go on Gordon Drive and the ChargePoint-brand station at the Hy-Vee in South Sioux City.

Unlike gas stations, it's relatively unlikely that Sioux City's Tesla owners will use the Tesla supercharger much, unless they live in an apartment complex with no ability to charge at home. Normally, drivers leave their Tesla charging in their garages overnight.

The charger would be used more commonly by out-of-town Tesla drivers heading to, say, Omaha or Sioux Falls, who need a quick boost.

Sioux Falls and Lincoln each have one Tesla supercharger, while Council Bluffs has two, as does the Des Moines metro area, with one in West Des Moines and one in Altoona. Omaha, oddly enough, has no Tesla superchargers, though it has a large number of Level 2 stations.

"They don't have any (Tesla superchargers) in Omaha, I'm not sure why. It's weird -- it's weird," said Dave Bernstein, one of Sioux City's more-prominent Tesla owners, who drives a Model 3. He compared driving a Tesla to "driving a cellphone" and said it's "by far the best car I've ever owned."

Frank Bulk, a Sioux Center resident, owns two Teslas, a Model 3 and a Model Y. He's been a Tesla driver for two years.

Without a supercharger in Sioux City, Bulk said, he wouldn't have been comfortable driving to Omaha without at least a three-quarters charge on his Tesla battery.

The new supercharger, he said, "gives me peace of mind."

"Now I don't have to worry about it, even if I left my house with a quarter full, even an eighth full, I'd be able to get to Sioux City no problem, and then charge up easily enough, just in 15 minutes, enough for me to get to Omaha without any issues," Bulk said.

In the years before he purchased a Tesla three years ago, Todd Klindt of Ames, the president of the Iowa Tesla Owners Club, said there was one place in the state he wasn't sure he'd be able to go if he bought a Tesla: the Sioux City area.

It wasn't so much that there was no charging infrastructure available at that time, but rather that the existing charging stations in Sioux City were so slow that they were essentially impractical.

"We've got a bunch of family in Sioux City. For about a year or two before I bought my car, every time my family would go anywhere, I would plot it out to see if I could make it with one of these fancy Teslas that I wanted so bad. And the only trip I could never make was to Sioux City and back," said Klindt, who was born in Sioux City and raised in Sac City.

Bulk and Bernstein both said the 15 or 20 minutes' wait while the Tesla is super-charging -- compared to a minute or two at a gas pump -- isn't as great an inconvenience as it might seem at first bat.

Dave Rowland, who owns a Tesla Model 3 and a Model S, used Sioux City's Tesla charger twice in the first week of June, during a trip into Nebraska and back to his home in the Okoboji area. He was delighted by the speed -- it charged his car at about 800-plus miles per hour.

"It's the fastest supercharger that we've used to date," he said.

Some Tesla customers (Bernstein and Klindt among them) have free supercharging, which the company provides certain customers for promotional reasons. For those who have to pay at the charger, it's still cheaper than gasoline -- Bulk said he recently paid $13 in West Des Moines for roughly 200 miles' worth of electricity. Klindt estimated that charging his Tesla at home in Ames costs about $10 for 330 miles' worth of juice.

The price paid for a charge can vary, naturally, with regional electric rates, just as gasoline prices in California are higher than in Louisiana.

Don't get scammed out of your retirement

After Younkers closed in 2018, its former escalator was turned off for good. Two-level escalators at the Ho-Chunk Centre atrium and MercyOne's Central Medical Building were replaced with staircases. Now HOM's joins the list.

US 20 bypass ramps to be closed for resurfacing

SIOUX CITY -- U.S. Highway 20 entrance and exit ramps in Sioux City are scheduled to be closed intermittently during nighttime hours this week…

Frank Bulk plugs in his Tesla Model Y at the new Tesla Supercharger in Sioux City on June 5. The electric vehicle maker installed its first station in Sioux City last month near the Casey's General Store at 4727 Southern Hills Drive.

A bank of Tesla Superchargers is now open for service on Southern Hills Drive in Sioux City on June 5.

Frank Bulk gets into his Tesla Model Y after charging his car at the new Tesla Supercharger in Sioux City on June 5.

A bank of Tesla Superchargers is now open for service on Southern Hills Drive.

A bank of Tesla Superchargers is now open for service on Southern Hills Drive in Sioux City, Iowa, Saturday, June 5, 2021.