The Sioux City Younkers, shown above has served as an anchor tenant for Southern Hills Mall since it opened in 1980. Wednesday is the last day of the chain's going out of business liquidation sale. 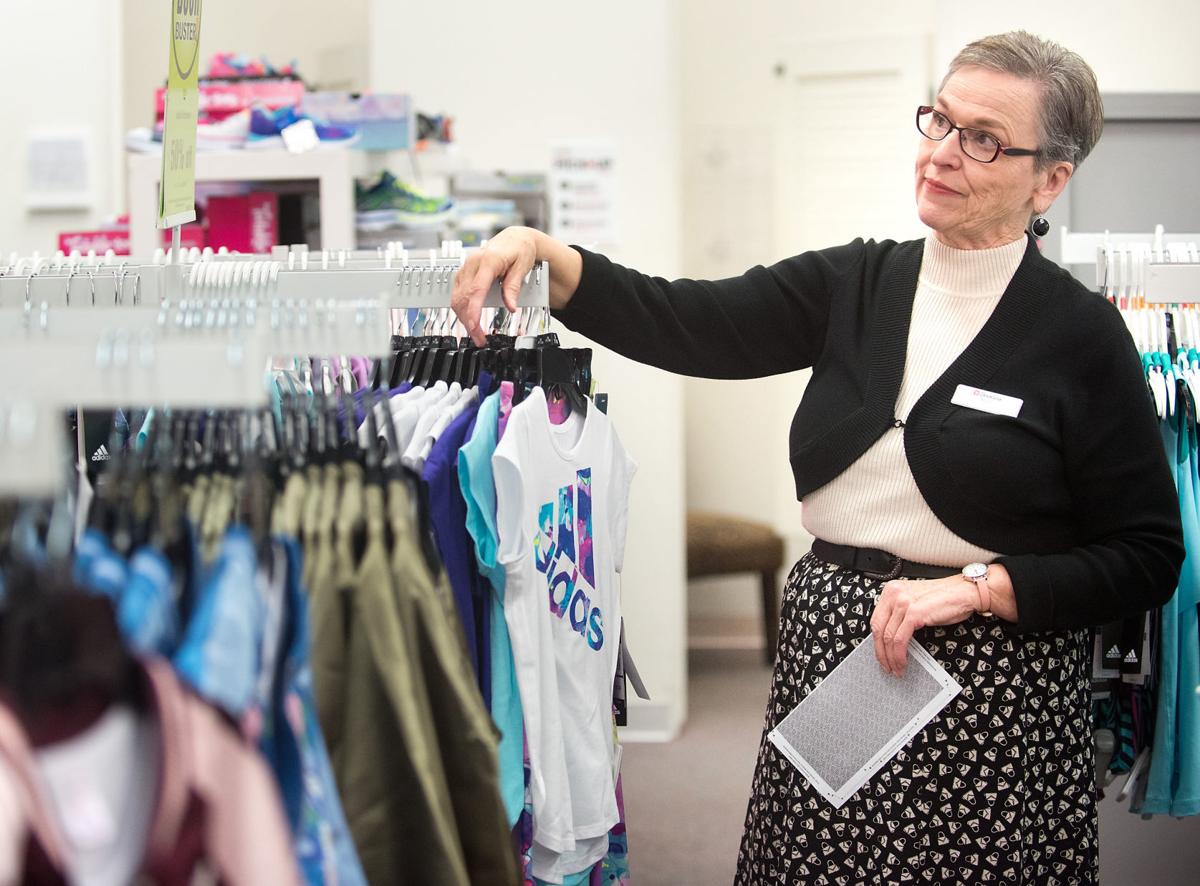 Younkers employee Mavis Klein sorts through clothing at the retailer's store at Southern Hills Mall in an August 2017 file photo. As part of the bankruptcy of its parent company, Bon-Ton Inc., Younkers is liquidating all merchandise at its stores, including the Southern Hills store, which has been an anchor at the mall since it opened in 1980.

SIOUX CITY -- Younkers has served as an anchor at Southern Hills Mall since the indoor shopping center opened in 1980.

The department store's 38-year run at Southern Hills soon will come to an end, following the liquidation of the chain's remaining merchandise. The going-out-of-business sale, which started April 20 and is expected to run up to 10 or 12 weeks, followed the bankruptcy of Younkers' parent company, Bon-Ton Inc., which operated 254 stores across 23 states under various nameplates.

The sudden loss of a tenant housed in a two-story space in the 794,010-square-foot mall could spell more trouble for Southern Hills, which has seen increased competition from several large open-air shopping centers in recent years.

Up until now, Southern Hills has largely avoided the pitfalls experienced by some other indoor malls by retaining its largest tenants. In addition to Younkers, it's currently anchored by two other department stores, J. C. Penney and Sears, and Scheel's, Barnes & Noble and AMC Theatres.

The mall's first major blow occurred in 2003 when Target, also an original anchor, left to open a standalone store in the then-newly developed Sunnybrook Plaza. Target's former space in the mall was quickly replaced by Penney, which closed its longtime downtown store at the same time.

"Regarding the anchor space currently occupied by Younkers, we have started discussions with potential new tenants and we will share additional details in the future," Green said in an email.

Washington Prime Group CEO and director Lou Conforti noted the demise of Bon-Ton and its affiliates stores was not a surprise to the investment group.

“The liquidation of Bon-Ton Stores was expected and we planned for it," Conforti said in an email. "We are currently vetting opportunities for the 16 stores within Washington Prime Group’s portfolio.”

Last year, Washington Prime Group paid $55 million to retain Southern Hills Mall. At the time of the transaction, the ownership group highlighted Southern Hills as the only indoor shopping center of its caliber in a 90-mile radius and noted the Sioux City market consistently ranked as one of the top small markets for businesses.

Additionally, the shopping center has an occupancy rate of 90.9 percent, according to Washington Prime’s 2017 annual report released in December.

But losing a store the size of Younkers could have a domino effect on Southern Hills. A CNN report pointed out that the departure of a large department store opens the door for other stores to break their leases or negotiate for much cheaper rent.

Two other Southern Hills tenants, Penney and Sears, for example, also have had financial hardships as of late. In April, Sears sold and leased back four stores and adjacent auto care centers to Washington Prime, including its Southern Hills location.

Analysts are predicting 20-25 of American malls to close in the next five years, flames fueled by the rise of e-commerce and the slow death of traditional department stores.

The demise of Younkers and other retailers is something Sioux City’s economic development director Marty Dougherty has noticed. He attributes it to the “Amazon Effect,” a general way of pointing out how e-commerce is outpacing most brick-and-mortar retailers in sales.

“Younkers has been in Sioux City a very, very long time," Dougherty said of the brand, which traces its roots in the city to the 1880s and the former Davidson Brothers Co. "It’s kind of disappointing that they would close. But, I mean obviously, there are enormous changes occurring in the retail world in America.”

Still, Dougherty thinks Sioux City will be OK and that traditional retailers will maintain a presence here.

“We are fortunate in Sioux City to have a lot of retail. We have always been kind of a regional center and we have new development going as we speak,” he said. “Exactly how all that plays out?

“Time will tell, but again we are fortunate to have strong developer interest, we’ve seen sales tax growth continue even through this time period in Sioux City but it’s going to look different and we’ll probably see more changes down the road.”

Data backs up Dougherty's sales tax boast and shows that Sioux City’s retail sector has been pretty consistent, even with the Amazon effect claiming retail victims left and right.

For the last 10 fiscal years, Sioux City has hovered around the $1.5 billion mark for real total taxable sales, according to research from the Iowa State University Department of Economics.

Additionally, it rose to nearly $1.7 billion in fiscal years 2015 and 2016, which coincided with the timing of the CF Industries expansion project that attracted more than 5,300 temporary construction workers to the community. Retail sales stood at $1.62 billion in the last fiscal year.

The author of the Iowa State research paper is Liesl Eathington, an assistant economics professor at the school and the director of the Iowa Community Indicators Program, an initiative that provides resources for understanding regional economic and demographic change.

Eathington’s office compiles retail data for each county and city and uses that to compare municipalities within those peer groups. There are 21 communities considered part of Sioux City’s peer group, including Des Moines, Cedar Rapids and Council Bluffs.

“Overall, your position within the peer group looks to be pretty stable in the last 10 years,” Eathington told a Journal reporter. “Sioux City is a fairly strong retail trade center and seems to be not losing ground to other retail competitors.”

Furthermore, Eathington noted Sioux City has a significant "pull factor"  ratio, a formula used to determine how many people shop locally and how many people from outside city limits visit a community for goods and services.

“There are smaller trade centers in the region but what we expect is that the bigger the place, the bigger the range of goods and services that you are able to offer and that in of itself creates a draw for people because they know if they go to Sioux City they’re probably going to find not only what they are looking for but choice in what they are looking for,” she said.

Because of Sioux City’s ability to draw people in, Eathington thinks other retailers should see a boost from the demise of Younkers. Clothing was the store’s most abundant product, but kitchen goods, home supplies, beauty products and other assorted items also were sold there.

"Just because the store goes away doesn’t mean the demand for those types of goods goes away,” Eathington said.

While former Younkers’ customers will find a new place to buy apparel and other items, it still leaves questions about the future of Southern Hills Mall, which turns 40 in two years.

Although Washington Prime officials are staying tight-lipped about the Younkers space, analysts have offered a number of solutions for malls to save themselves. The most common thought appears to be drastic redevelopment.

A.T. Kearney, a Chicago-based global consulting firm, suggests that when redeveloping, malls consider embracing one of these four options:

He noted the mall hasn't had any major upgrades or renovations with the exception of projects taken on by the anchor tenants themselves in quite a while.

Bogenrief also suggested Southern Hills look into becoming an open-air shopping center like the adjacent Lakeport Commons or the upcoming Sunnybrook Village, a $50 million project he is involved with.

“The days of a typical mall are kind of numbered, I think," Bogenrief said.

Editor's note: An earlier version of this story mistated the number of years Younkers has been at the Southern Hills Mall.

Washington Prime Group was part of a group that made a bid attempt so save Bon-Ton Inc. and all of its brands, including Younkers.

WPR CEO and director Lou Conforti, via email, commented on that effort which fell through after a federal judge barred Bon-Ton from paying the investor group a $500,000 fee as compensation for due diligence costs

“Regarding the Bon-Ton Stores opportunity Washington Prime Group considered with the buy-out consortium, we positioned WPG as a secured real estate lender and viewed it as a high-yielding capital structure investment with potential syndication participation.

"The opportunity would have allowed us time to evaluate every space, while getting paid to wait. Long story short, we really liked the deal, and while it didn’t happen, we feel good about addressing these stores in a comprehensive fashion.”

SIOUX CITY -- After more than seven decades in Sioux City, it appears Younkers department store likely will close its doors for good this summer.

LOS ANGELES — A part-time job at a Siouxland computer manufacturer was Seth Harden's gateway into the technology sector.

Younkers history: For many years, Sioux City had two; soon we'll have zero

SIOUX CITY -- The history of retail in Sioux City is the cyclical tale of retail everywhere -- an innovative store opens, expands, grows into …

SIOUX CITY — Iowa Sen. Rick Bertrand told a Fox News host Sunday he thinks the state’s new anti-abortion law is something that not only Iowans…

LE MARS — Wells Enterprises Inc. hopes to heat up sales of its frozen treats this summer with a slew of new products and an integrated ad camp…

SIOUX CITY – With the pending departure of one its anchor tenants, the operators of Southern Hills Mall have been proactive in adding more ret…

SIOUX CITY — Nine months after striking a deal with bankers to save Plaza Bowl, Brian Atchinson is part of a group purchasing the nearly 60-ye…

WALL LAKE, Iowa – One of Siouxland’s most prolific food processors is launching a new sauce to kick off the grilling season.

SIOUX CITY -- In a whiplash-inducing turn of events, Younkers has announced it's making a return.

Amazon says it will not be building a new headquarters in New York, a stunning reversal after a yearlong search.

The Sioux City Younkers, shown above has served as an anchor tenant for Southern Hills Mall since it opened in 1980. Wednesday is the last day of the chain's going out of business liquidation sale.

Younkers employee Mavis Klein sorts through clothing at the retailer's store at Southern Hills Mall in an August 2017 file photo. As part of the bankruptcy of its parent company, Bon-Ton Inc., Younkers is liquidating all merchandise at its stores, including the Southern Hills store, which has been an anchor at the mall since it opened in 1980.