Then Acting FBI Director Andrew McCabe listens during a Senate Intelligence Committee hearing May 11, 2017 on Capitol Hill in Washington.

The decision, coming at the end of a tumultuous week between the Justice Department and the White House, is likely to further agitate a president who has loudly complained that federal prosecutors have pursued cases against his allies but not against his perceived political enemies.

The action resolves a criminal investigation that began nearly two years ago with a referral from the Justice Department's inspector general's office, which concluded that McCabe had repeatedly lied about having authorized a subordinate to share information with a newspaper reporter for a 2016 article about an FBI investigation into the Clinton Foundation.

The case was handled by the U.S. attorney's office in Washington, which was at the center of a public rift with Justice Department leadership this week over the recommended sentence for Trump ally Roger Stone. Senior Justice Department officials overruled a decision on a recommended prison sentence that they felt was too harsh, prompting the trial team to quit the case. Attorney General William Barr also took a rare public swipe at Trump by saying in a television interview that the president's tweets about the Stone case and other matters were making his job "impossible."

Separately, the Justice Department has begun reviewing the handling of the case against former national security adviser Michael Flynn, a person familiar with the matter said Friday.

On Friday, prosecutors notified McCabe's attorneys in a phone call and a letter that they were closing the case. The letter, signed by the chief of the office's public corruption unit, did not give a precise reason but said the decision was reached after "careful consideration" and "based on the totality of the circumstances and all of the information known to the government at this time."

McCabe's lawyers, Michael Bromwich and David Schertler, said they were gratified by the decision.

"At long last, justice has been done in this matter," the lawyers said in a statement. "We said at the outset of the criminal investigation, almost two years ago, that if the facts and the law determined the result, no charges would be brought."

Speaking Friday on CNN, where he works as a contributor, McCabe said it was an "absolute disgrace" that the investigation had taken so long and that he was relieved to be done with a process that he described as "so unbelievably tense."

Though federal prosecutors wrote that they consider the matter closed, Justice Department actions in the last few months have proven unpredictable, with a willingness to scrutinize or revisit decisions that had appeared resolved.

McCabe, a frequent target of Trump's attacks, has denied that he intentionally misled anyone. He has said his 2018 firing — for what the Justice Department called "lack of candor" — was politically motivated. He sued the Justice Department in August, saying officials had used the inspector general's conclusions as a pretext to rid the FBI of leaders Trump perceived as biased against him.

The decision is likely to further exacerbate tensions between Trump and Barr, who before speaking out in the television interview had privately complained to aides and the president himself that Trump's comments about the Justice Department were undercutting his political agenda and raising questions about the department's credibility. The White House was not given a heads-up about the decision beforehand, a person familiar with the matter said. The person spoke on condition of anonymity to discuss private conversations.

The moment came against a backdrop of growing anger from Trump at the Justice Department. The president has seethed that more of his political enemies have not been charged, included former FBI Director James Comey and his associates.

The president was particularly incensed no charges were filed over Comey's handling of memos about his interactions with Trump, a matter that was referred to the Justice Department for potential prosecution, according to a White House official and Republican close to the White House who weren't authorized to speak publicly about private discussions and spoke on condition of anonymity.

The president angrily denounced the decision and berated Barr over it, according to the officials. Aides expected that the decision not to charge McCabe could produce a similar eruption of rage. Trump did not address the matter during a media appearance Friday.

Trump has also repeatedly complained about FBI Director Christopher Wray in recent months, saying he has not done enough to rid the bureau of people who are disloyal to Trump.

It was not immediately clear what had prompted a review of the Flynn case, though the person familiar with the matter said U.S. Attorney Jeff Jensen of St. Louis was working on it. The New York Times first reported Jensen's involvement.

Ron Strom pets his new robotic cat, given to him on Valentine's Day by Christy Nikkel, right. Nikkel is the executive director of The Heritage at Northern Hills retirement community in Sioux City.

Dorothy Barto, left, is given a robotic puppy for Valentine’s day by Christy Nikkel, the executive director of The Heritage at Northern Hills retirement community. The electronic pets were donated by the Friends of the Animal Shelter.

Edee Swanson, left, is given a robotic cat on Valentine's day by Christy Nikkel, the executive director of The Heritage at Northern Hills retirement community. Four of the residents were given electronic pets donated by the Friends of the Animal Shelter.

SIOUX CITY -- Four residents at the Heritage at Northern Hills retirement community were presented with a special surprise Friday afternoon: robotic pet cats and a dog.

In an event organized by Northern Hills staff and the Friends Of The Animal Shelter (FOTAS), three residents were given realistic, furry electronic cats, while one got a dog. The animals make realistic noises and motions.

Heritage at Northern Hills resident Ron Strom, who said he's "maybe a shade more" than 85 years old, was given a robotic cat, which he named "Sweetie."

Sweetie was the name of a cat he had for about 10 years. The previous Sweetie, he said, was "almost as good as this one."

"This one's going to be more ideal, because, it's not any maintenance," he said.

Cindy Rarrat, president of FOTAS, said this was the first such event held by the group. If possible, she said, they'd like to do this again.

"It provides so many benefits, by allowing (the residents) to brush the animal, care for the animal. The pet takes care of itself by keeping itself clean, they don't have to clean the litter box or they don't have to deal with going out and getting food and things like that for them," Rarrat said.

FOTAS furnished the Joy for All-brand pets, which are designed for use by senior citizens.

The Heritage at Northern Hills does allow its residents to have pets, but some are unable to care for animals. The residents who were selected to receive the electronic pets were those known to enjoy animal companionship.

Edee Swanson, a Heritage at Northern Hills resident, seemed pleased with the electronic cat she was given. But she couldn't help noting that there was something else that would have made her Valentine's Day even better.

"I'd rather have a man," Swanson said.

WASHINGTON, D.C. -- Iowa Congressman Steve King joined 181 of his Republican colleagues on Thursday in voting against removing a 1982 deadline for state ratification and reopening the process to amend the Constitution to prohibit discrimination based on sex.

The measure passed largely along party lines and now goes to the Senate.

In a video posted to his website, the Fourth District representative said no one he spoke to who supports the Equal Rights Amendment could say what rights men have that women don't. 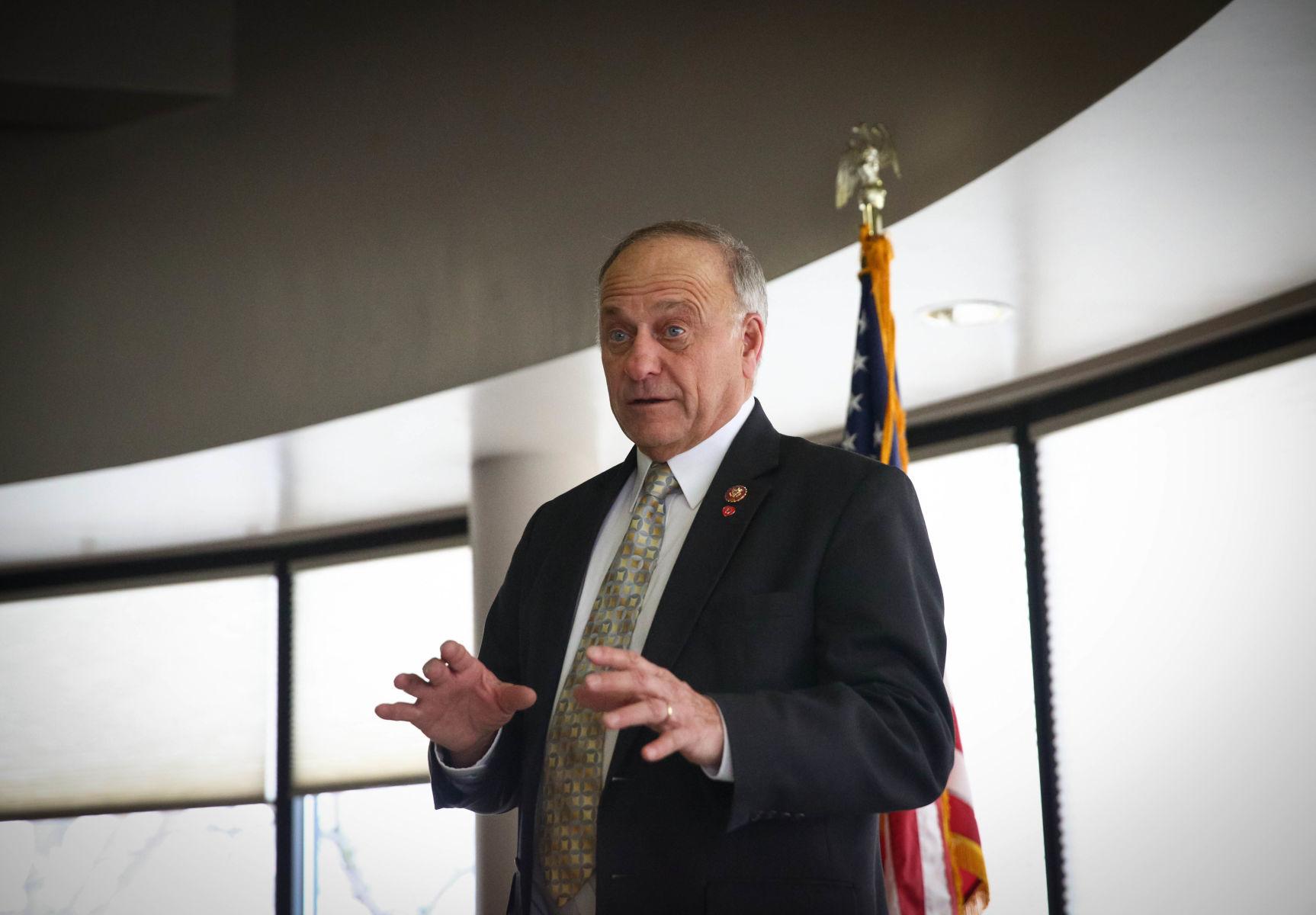 Nearly 50 years after it was first approved by Congress and sent to the states, the Equal Rights Amendment “is just as salient as ever,'' said the bill's sponsor, Democratic Rep. Jackie Speier of California. ”For survivors of sexual violence, pregnancy discrimination, unequal pay and more, the fight for equal justice under the law can’t wait any longer.''

Congress sent the amendment, which guarantees men and women equal rights under the law, to the states in 1972. It gave states seven years to ratify it, later extending the deadline to 1982. But the amendment wasn’t ratified by the required three-quarters of states before the deadline.

That was largely due to the efforts of the late conservative activist Phyllis Schlafly, who spoke out in opposition to the ERA, saying, among other things, that it reduced the "special protections and privileges" afforded to women -- like not being included in a military draft.

Last month, however, Virginia lawmakers voted to ratify the amendment, becoming the 38th and final state needed. In addition to Virginia, Nevada and Illinois also voted to ratify the amendment in the past three years. But five states have moved to rescind their earlier approvals, and the Justice Department has said it's too late for action.  A lawsuit is now ongoing.

King noted Schlafly's influence on the ERA and called her a great help, also noting that the ERA would "force taxpayers to pay for abortions."

Democratic Sen. Ben Cardin of Maryland and Republican Sen. Lisa Murkowski of Alaska have co-sponsored a similar proposal, but the measure is unlikely to be taken up in the GOP-controlled Senate. Cardin said this week he is confident the resolution would pass if Senate Majority Leader Mitch McConnell allowed a floor vote.

“It is clear the statutory period to have passed the ERA expired decades ago, and it would be necessary for it to be reintroduced to have constitutional viability,'' Graham said.