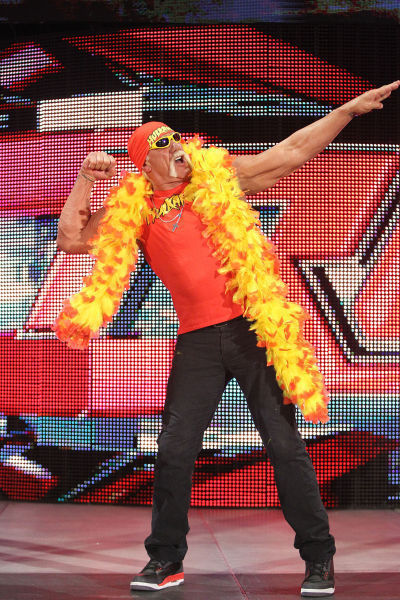 Look who's back: Hulk Hogan returns to the world of the WWE. He'll be on hand Sunday when WWE's "SmackDown" is taped at the Tyson Events Center. 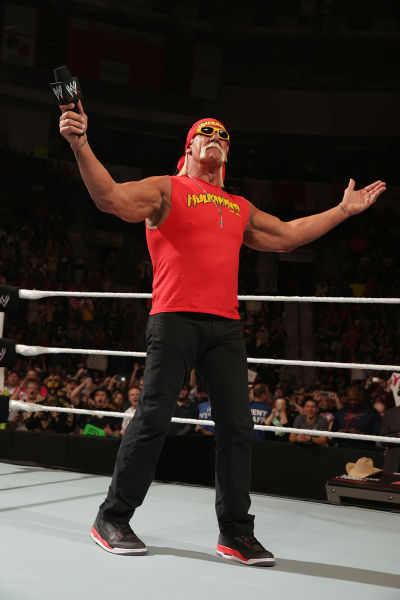 Hulk Hogan will be in Sioux City Sunday as part of the WWE SmackDown television event. A member of the Hall of Fame, he'll be making his first Sioux City appearance in more than 30 years. 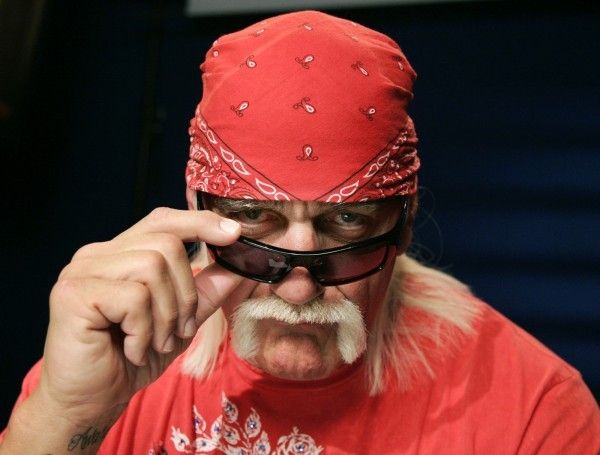 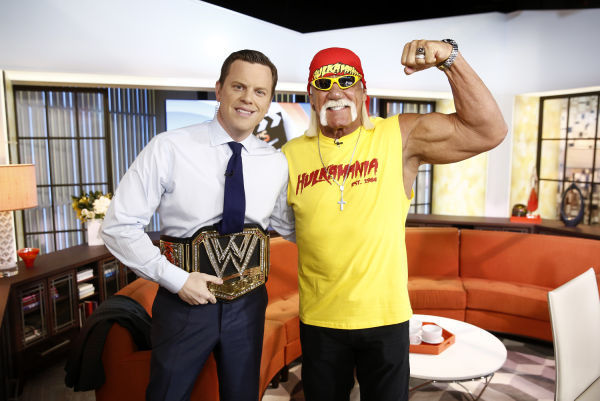 Willie Geist, left, got to taste a bit of Hulkamania when Hulk Hogan appeared on the "Today" show earlier this year.

Hulk Hogan is ready to put a period at the end of a long sentence.

After writing an involved history that included marital woes and health problems, he’s back with the World Wrestling family, looking for a happy ending – one that won’t include unnecessary clauses.

“I crashed and burned,” the 61-year-old professional wrestling legend admits. After leaving Vince McMahon’s wrestling empire to strike out on his own, he starred in a reality series, divorced his wife and went through so many surgeries it’s amazing he’s still standing.

“I decided to take a leap of faith and come back to where it all started,” he says. “The WWE universe is a monster. With social media, it’s bigger than the NFL, the NBA and baseball, all together. Everything is moving at a faster pace and you’ve got to stay ahead of the curve.”

Appearing on WWE Raw, Hogan has stepped into the ring but, because of those surgeries, been advised not to suit up. Good luck.

“My ego explodes when I get around the wrestling ring,” he says. “I get goosebumps. It’s like a hot car. I get the jones … and I want to be back.”

Hogan threw a couple of punches at one event and the crowd went wild. He did, too.

“Triple H told me I’ve got nothing to prove but the last time I wrestled was not with this company and I want my legacy to end with the WWE.”

To that end, Hogan – who was born Terry Gene Bollea – has been working out like he’s going for another championship belt. “I weigh 295. I’m in really good shape and I’m training like I’m going to get in the ring. I’m like a convict given a life sentence.”

CLICK HERE TO SEE A GALLERY OF PHOTOS FROM HULK HOGAN'S CAREER.

Apparently, colleagues want to see that, too. At an event in Columbus, Ga., fellow WWE athletes thanked him for punching them. “You’ve made our careers now,” they told him. “I didn’t realize a lot of these kids weren’t even in the business when I slapped Andre the Giant.”

And yet, professional wrestlers don’t get any bigger than Hogan. A 12-time world champion, he dominated the sport in the 1980s and ‘90s, enjoying life at the top longer than most competitors’ careers.

In 2003, he left the WWE and became aligned with Total Nonstop Action Wrestling. A war of words ensued between Hogan and his former employer; health problems limited his ability to wrestle.

In short, Hogan was in a turnbuckle of his own making.

“I did it to save my marriage,” he says, bluntly. “By the time we started it (in 2005), my marriage had unraveled. My children didn’t need me anymore and I thought the reality show would get everybody busy and bring us back together.”

Hogan didn’t know best. Wife Linda left him; son Nick “got into a little bit of a problem” and daughter Brooke realized writing was her passion, not singing.

Negative thinking did something few wrestlers could. It nearly defeated him.

Until he met Jennifer McDaniel, the woman who, in 2010, became his second wife, Hogan didn’t get up off the mat and start realizing how great life really was.

“She said if I hung around people with negative energy, I’d be negative, too.” Now, the Hogans keep tabloid news out of their home, concentrate on positives and look ahead, not behind.

Brooke is doing well, writing for others, “Nick has landed on his feet, doing the deejay thing” and Linda, he hopes, is prospering, too.

“I haven’t talked to her for a long time but I pray for her. I pray for greatness and goodness.”

Although Hogan’s past includes so many ventures it would make a financial adviser’s head spin (he tried restaurants, movies, music and video games), he realized it was impossible to shake the Hulk persona.

“I shaved off the mustache for ‘Assault on Devil’s Island’ and looked totally different but wherever I’d go, people still recognized me. I couldn’t escape it. Maybe it was the way I lumber around.”

Now, with social media as his best campaign manager, Hogan is back on the trail, hoping to rekindle the Hulkamania that once rallied wrestling fans.

“Thanks to social media, I’m hotter than I was in the ‘80s and ‘90s,” he says. “When I go through airports now, young kids – 4 and 5 years old – will come up to me and say, ‘You’re my favorite wrestler’ and I don’t even wrestle anymore. But they see (the matches) on the Internet and they know what I can do.

“If this all works out,” Hogan says of his return to the WWE, “Hulk will really become immortal. It’s where my home is. It’s where I belong.”

Tickets: Available at all Ticketmaster outlets

Details: Hulk Hogan will be on hand Sunday for the action, which will be taped for broadcast on SmackDown. Among the wrestlers slated to appear: Roman Reigns and Dean Ambrose vs. Seth Rollins and Bray Wyatt. Additionally, The Big Show, Kane, Mark Henry, Dolph Ziggler, Rusev and the Divas are on the card. Hulk makes his first appearance in Sioux City in more than 30 years.

Just three days after he was inducted into the WWE Hall of Fame and one day after he appeared on Raw, WWE announced Tuesday night that Warrior…

On Saturday, Thomas Woods will celebrate his 29th birthday doing what he loves best: watching professional wrestling on TV.

Gallery: Hulk Hogan through the years

REVIEW: Eddie Redmayne, Felicity Jones add up in 'Theory of Everything'

“The Theory of Everything” doesn’t try to explain what goes on in physicist Stephen Hawking’s mind. But it sure gets to the bottom of his heart.

Television – as we knew it – changed dramatically 25 years ago today.

Look who's back: Hulk Hogan returns to the world of the WWE. He'll be on hand Sunday when WWE's "SmackDown" is taped at the Tyson Events Center.

Hulk Hogan will be in Sioux City Sunday as part of the WWE SmackDown television event. A member of the Hall of Fame, he'll be making his first Sioux City appearance in more than 30 years.

Willie Geist, left, got to taste a bit of Hulkamania when Hulk Hogan appeared on the "Today" show earlier this year.