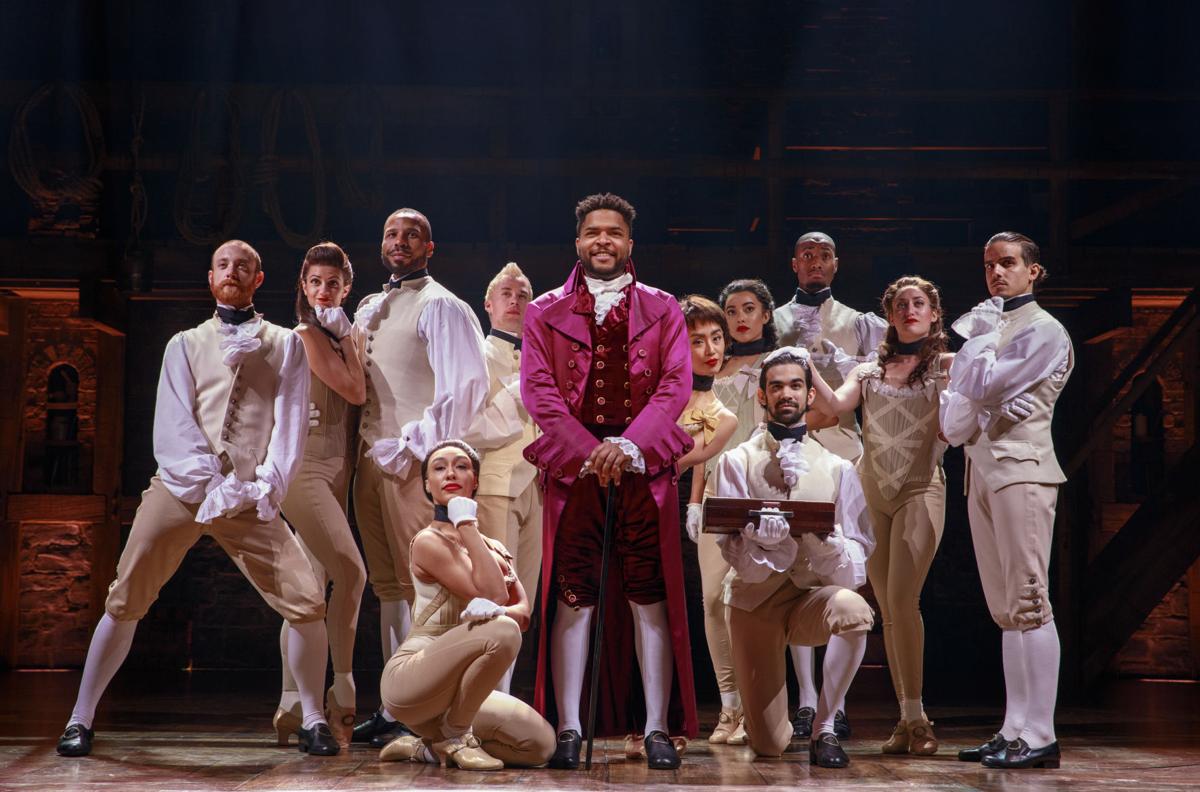 Bryson Bruce plays two roles in the touring production of "Hamilton": The Marquis de Lafayette and Thomas Jefferson. He can currently be seen in Omaha. 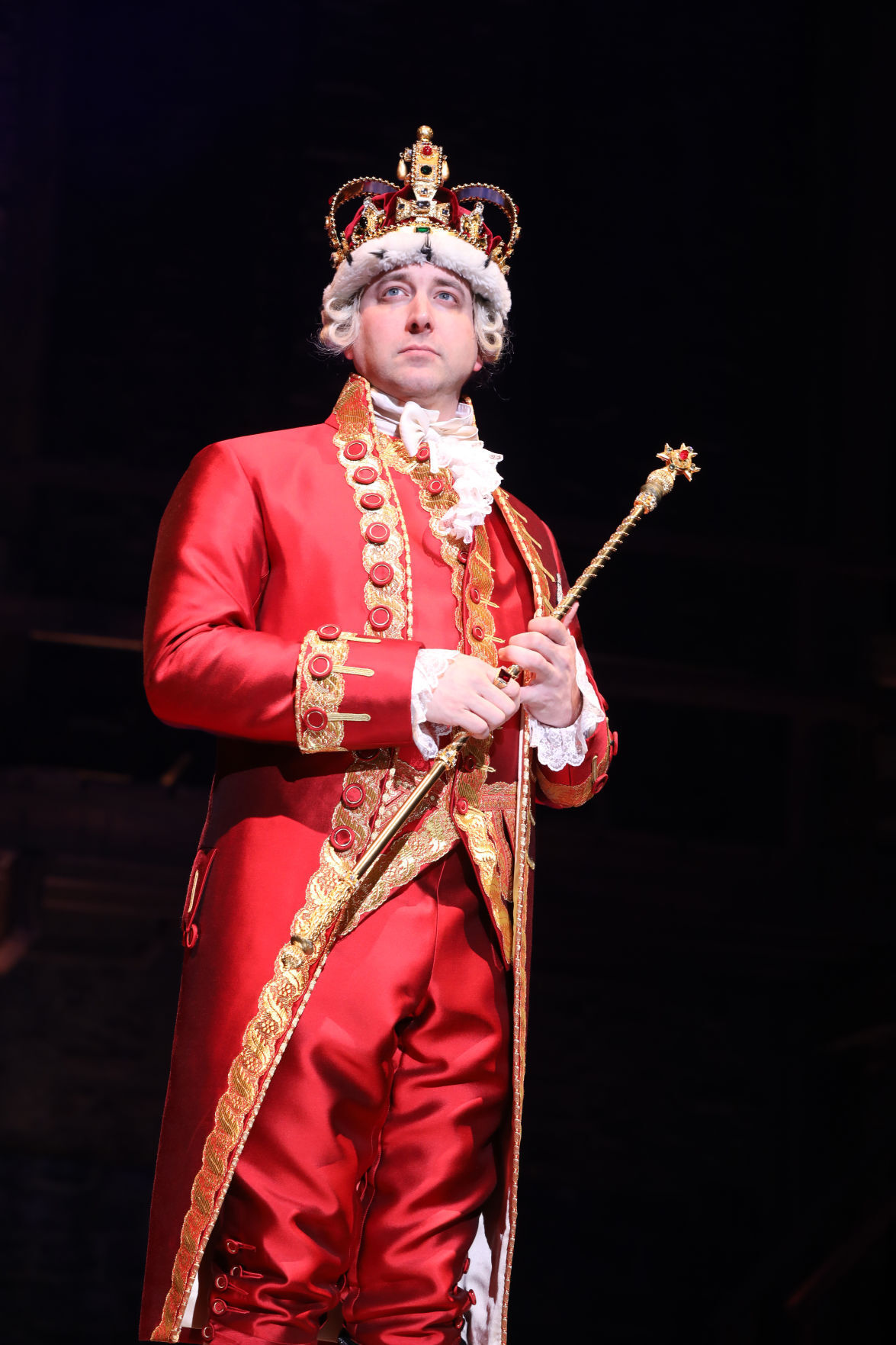 The crown King George wears in "Hamilton" isn't as heavy as it once was, says Peter Matthew Smith, the current titleholder. Thanks to changes in costume design, it's much lighter.

OMAHA -- Disney+ did theatergoers a big favor by recording the original Broadway production of “Hamilton” and letting them see the brilliance that was created.

The performance, though, has always been the elephant in the room. Are subsequent companies as good as the original? Thanks to a great touring edition, now in Omaha, that question is off the table and fans can focus on just how different others’ performances are.

In a word: Great.

Chief among them: Stephanie Umoh, who creates an Angelica Schuyler who resonates even in scenes she’s not in. She has a voice that’s incredible, giving songs like “Satisfied” and “It’s Quiet Uptown” even more emotion than you could imagine.

With “One Last Time,” Paul Oakley Stovall comes as close as “Hamilton” gets to a mid-show standing ovation. His booming voice conveys the heft of George Washington, revealing the implications of his absence from the country’s key position.

And Jon Viktor Corpuz’s contributions as John Laurens and Hamilton’s son, Philip, take a different turn here, too. Corpuz leans into the humor with the latter, helping telegraph later gut punches experienced by his parents.

Throughout, it’s possible to find new takes, new emphasis, new reasons to see yet another edition of the Tony- and Pulitzer Prize-winning musical.

While the ensemble isn’t as seamless as past ones (dancers’ moves aren’t as fluid as they could be) and the turntable doesn’t run as often as it should, the staging still surprises. This time out, you notice the clever wordplay Miranda has inserted in lesser characters’ dialogue and you see how less-than-novel the rap battle between Hamilton and Jefferson really is.

Edred Utomi, as Hamilton, is a much better singer than Miranda, which makes his songs stronger and, in some ways, a better match for Burr (nicely played by Josh Tower).

Zoe Jensen, as Hamilton’s wife, Eliza, makes her lament in “Burn” shine as brightly as her epilogue about the one who’s left to tell the story. (“Eliza” would be a great sequel.)

At times, the orchestra has the ability to overpower the actors and the lighting doesn’t exhibit the same crispness it did the last time “Hamilton” was in Omaha.

Miranda’s words are given more care here than they were in that company (you don’t have to freak about missing the raps). But that also points up some of the writing’s flaws. The second act is too eager to wrap things up. That slights some characters and all but excuses Peter Matthew Smith’s King George, who provides much-needed comic relief in the first act.

Mix it all together and “Hamilton” is still an incredible show – able to make history pop to life and have resonance for a contemporary audience.

Andy Blankenbuehler’s choreography was the original show’s secret weapon. Now that we’re familiar with it, it’s the tendons that hold this very muscular show together.

For repeat viewers (and, yup, they’re there) this is a great time to examine the show’s secrets – like the woman who plays the “bullet.” She touches everyone who dies in the show.

Thought you knew everything? This “Hamilton” reveals plenty, no matter how devoted you may be.

"Hamilton" runs through Nov. 14 at the Orpheum Theater.

Back for more: Peter Matthew Smith says the king is the best gig in 'Hamilton'

REVIEW: 'Last Night in Soho' is good -- but only to a point

Two-thirds of “One Night in Soho” is quite good. Then, it heads in a southerly direction and all the strength it built disappears.

REVIEW: 'Simon & Garfunkel Story' is thin but the stars have big talents

There wasn’t a lot of story in “The Simon & Garfunkel Story” at the Orpheum Theatre Thursday night, but there were plenty of those gloriou…

Bryson Bruce plays two roles in the touring production of "Hamilton": The Marquis de Lafayette and Thomas Jefferson. He can currently be seen in Omaha.

The crown King George wears in "Hamilton" isn't as heavy as it once was, says Peter Matthew Smith, the current titleholder. Thanks to changes in costume design, it's much lighter.