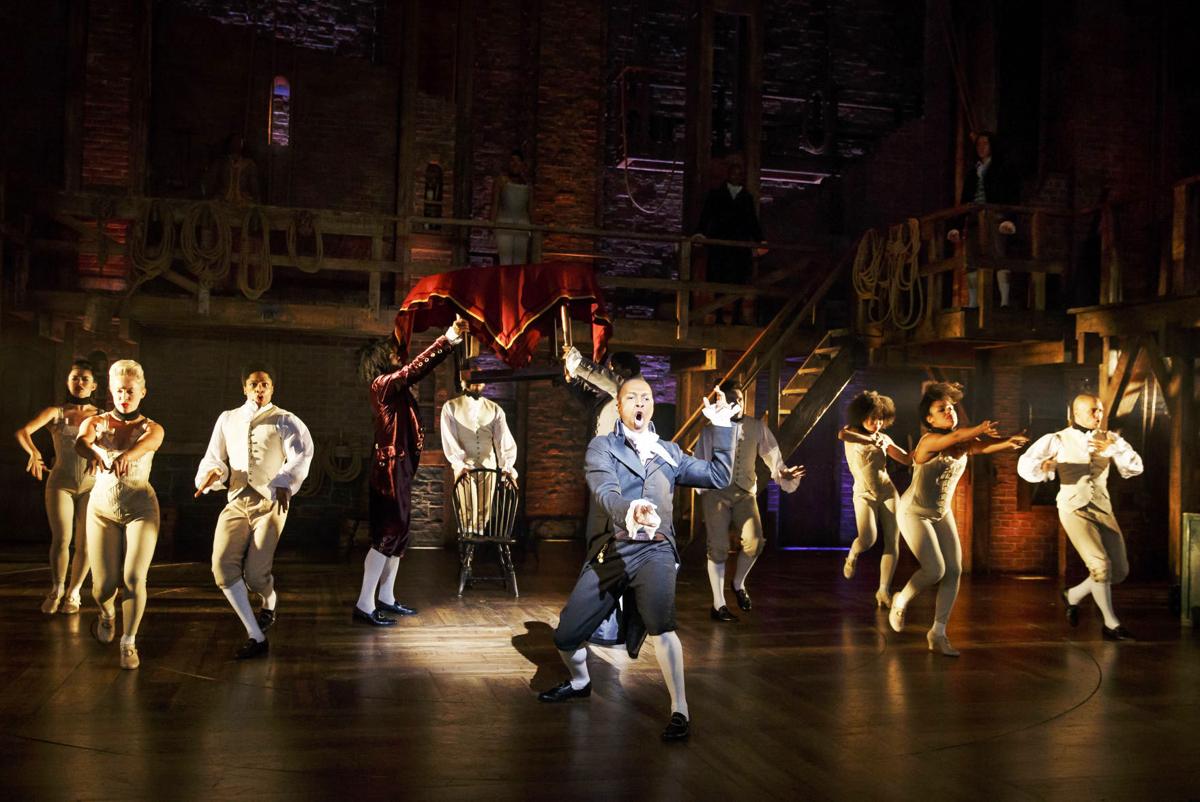 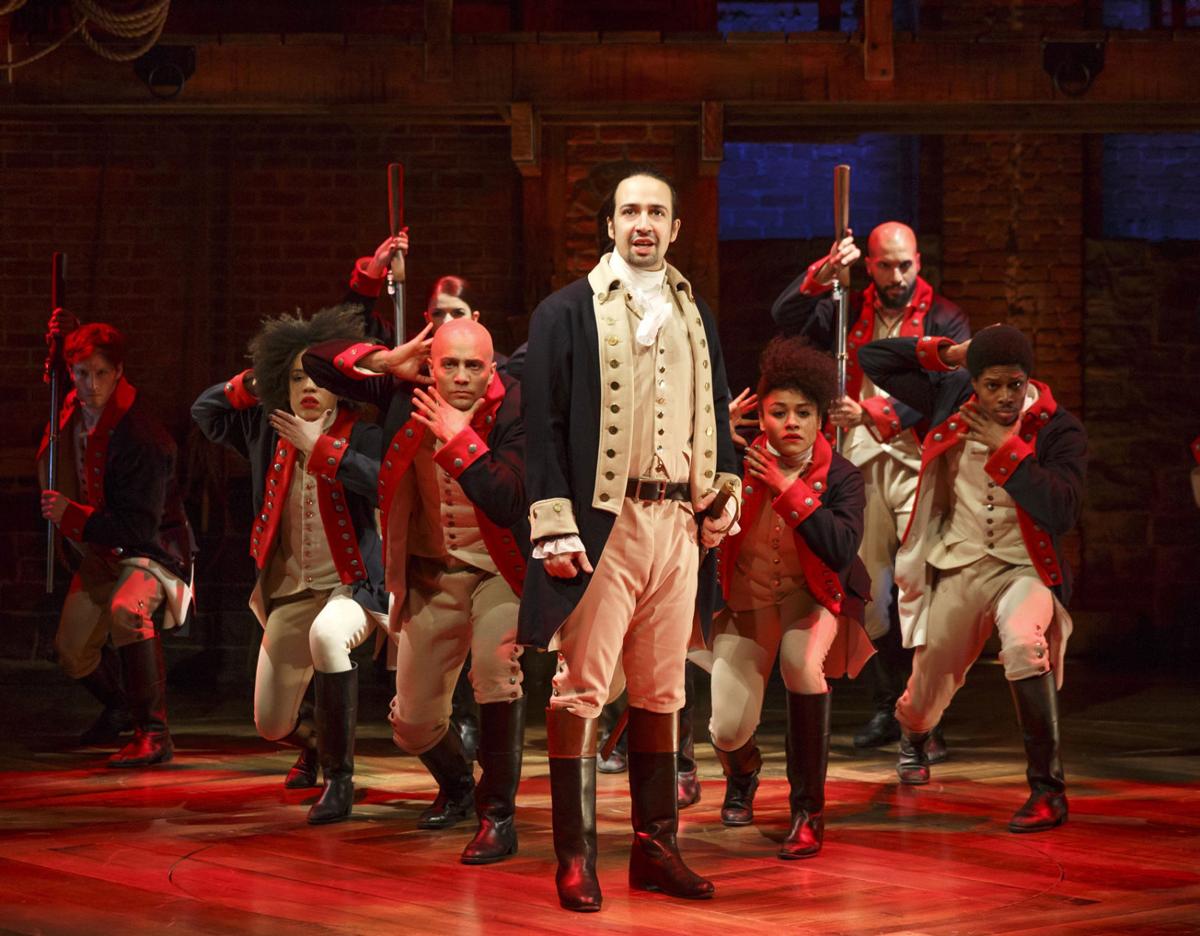 Lin-Manuel Miranda, foreground, with the cast during a performance of "Hamilton," in New York. 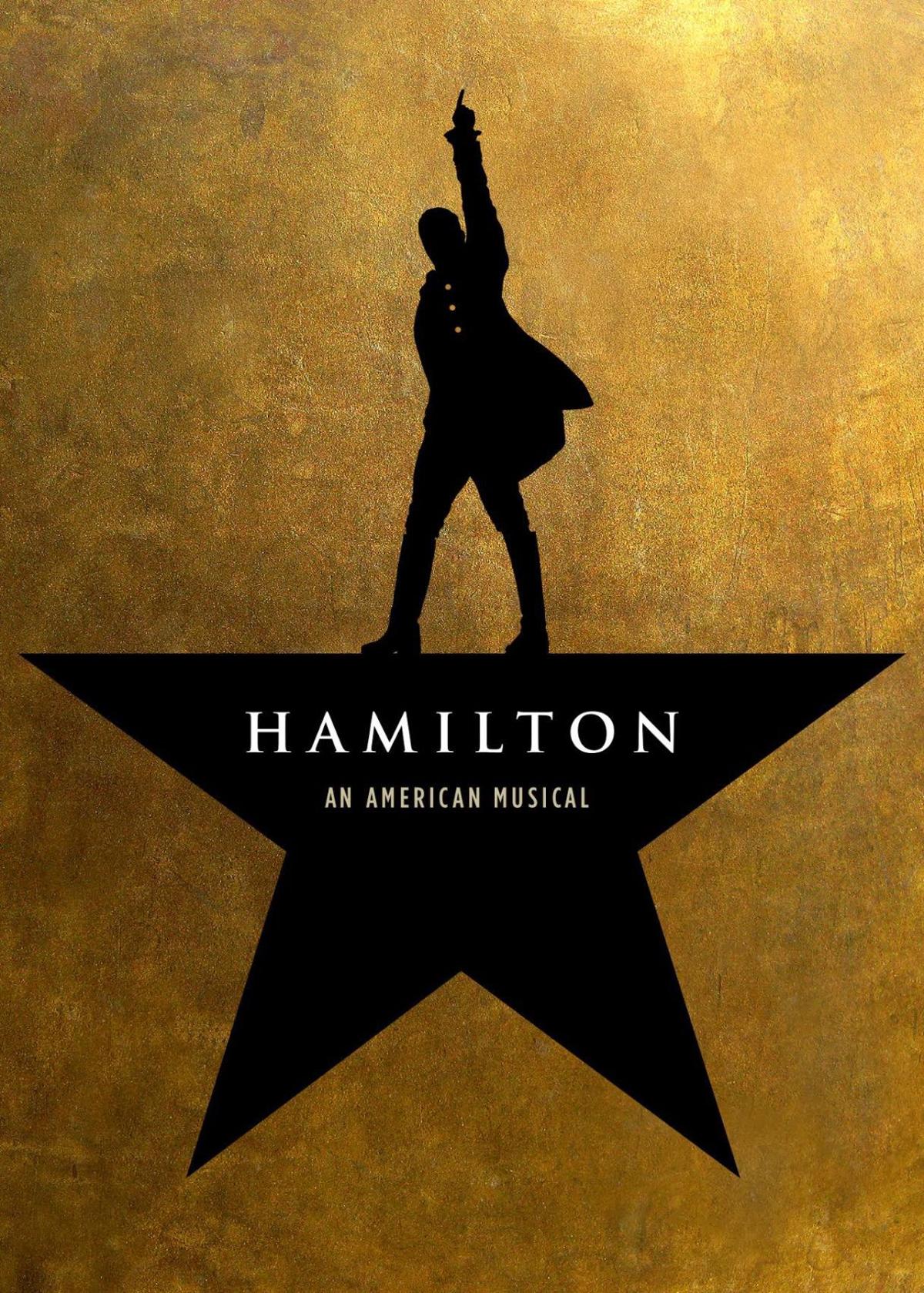 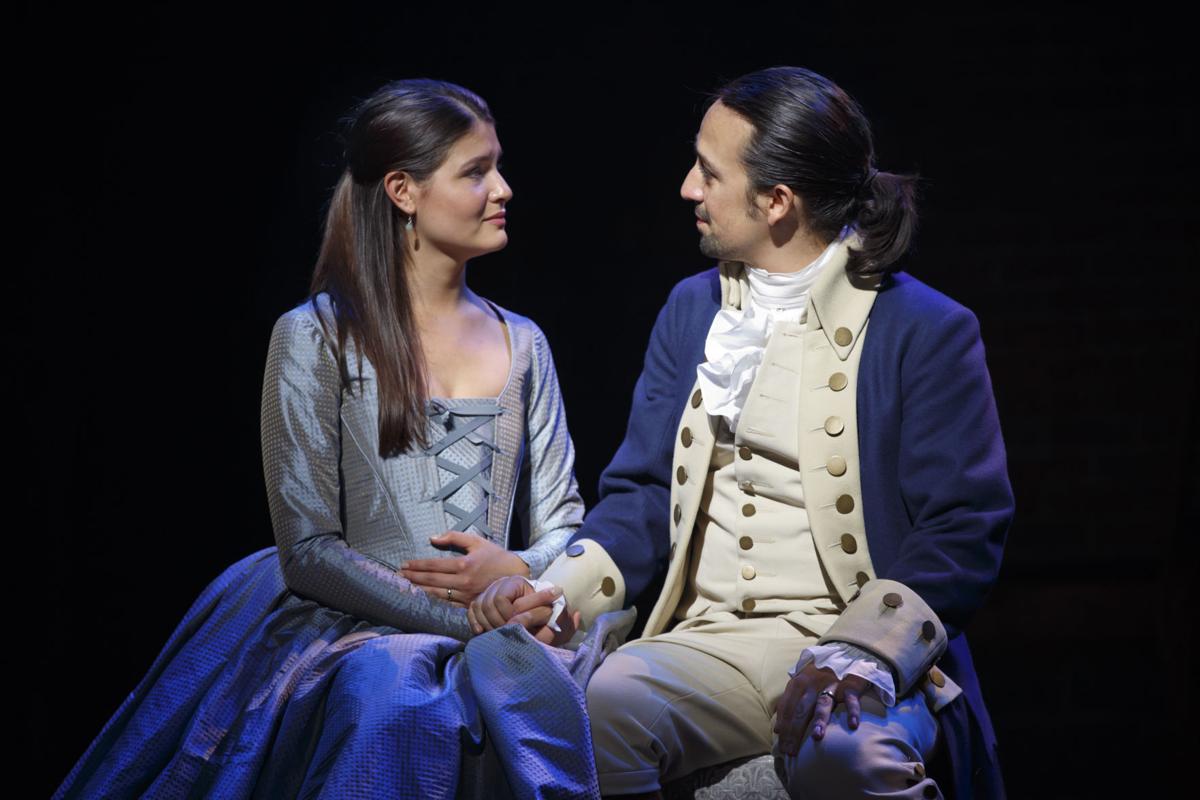 Phillipa Soo and Lin-Manuel Miranda play the Hamiltons, Eliza and Alexander, in "Hamilton." 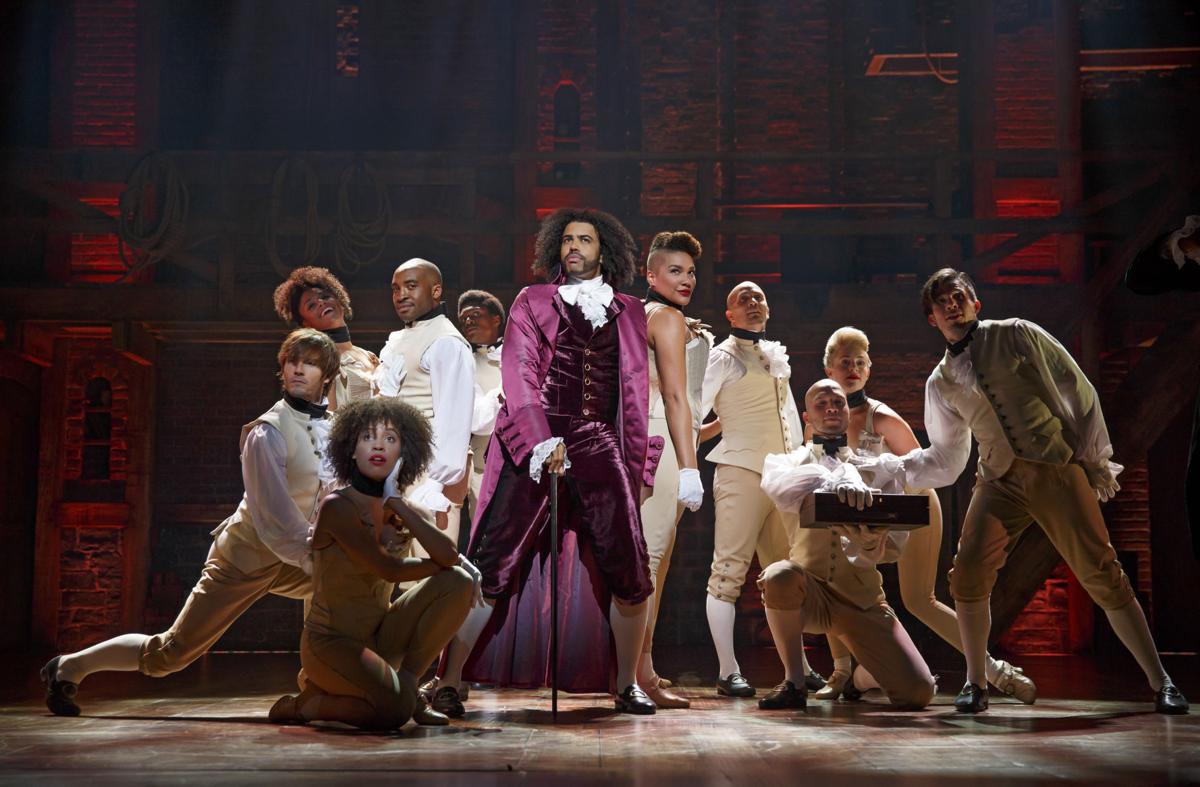 With “Hamilton,” that toughest ticket on Broadway, he imposes 21st-century attributes on 18th-century characters and makes audiences care about the way he tells their story.

Combining hip-hop, pop and traditional theater music, he emerges with a dazzling account that’s accessible on so many levels. Bolstered by Thomas Kail’s kinetic direction, the words and music register the same way those in “Rent,” “A Chorus Line” and “Les Miserables” did. This is a musical that isn't disappearing any time soon.

The Mozart/Salieri relationship between Alexander Hamilton (Miranda) and Aaron Burr (Leslie Odom Jr.) is played out on a number of levels. Extremely similar, the two jockey for position in the new country, hoping to win Washington’s favor, determined to make their mark in America’s history.

Told by Burr, the story covers their military, personal and governmental lives and, get this, pulls us in better than a best-selling beach read.

Andy Blankenbuehler’s choreography serves as the glue, marrying one scene to the next as the characters roll into play. Lafayette, the Schuyler sisters, Washington, Jefferson and Madison become much more than names in a history book. They’re dynamic characters who jump off the stage and into contemporary times. Current politicians, social media celebrities and headline-grabbing stars have nothing over them.

When they debate, it’s a rap battle. When they duel, it’s a cinematic action scene, complete with slow-mo choreography.

Miranda, wearing his writer’s hat, makes sure each figure registers. Daveed Diggs gets the best moments -- first as Lafayette, then as an above-the-fray Thomas Jefferson. He gets a wowser introduction with “What’d I Miss?,” bringing the wealthy Monticello master into play with the scrappy immigrant.

The three rich sisters (an early day trio of Kardashians) pull Hamilton into their world and give him immediate credibility. He marries Eliza (Phillipa Soo), but has a soft spot for Angelica (Renee Elise Goldsberry), who wonders how she let this man get away. She, too, has a memorable solo (“Satisfied”) that bolsters the idea Hamilton is a man with a definite sell-by date.

While Christopher Jackson’s stoic Washington is the adult in the room, Rory O’Malley’s King George is its jester, getting big laughs with brief moments on stage. His “You’ll Be Back” is a comic highlight that’s a tribute to Miranda’s writing.

Odom gets the show’s big numbers (“Alexander Hamilton” and “Room Where It Happens”); Miranda has the most dramatic scenes. They’re both great, both deserving of the Best Actor Tony.

“Hamilton,” though, isn’t a show that’s dependent on the actors who play the roles. It’s so dense there’s room for many interpretations, many reactions. It’s the kind of musical that changes the game and galvanizes a generation.

It’s an original and, yes, it’s worth the hype.

I paid $770 for one ticket to “Hamilton” and it was worth every penny.

A lifelong Phan: Katie Travis stars in new touring production of 'Phantom of the Opera'

Katie Travis became a “Phantom of the Opera” fan at age 4 and hasn’t waned since.

Tyler Perry remembers reading the Easter story so many times in church, “I can almost recite it now.”

SIOUX CITY | You’ve got to hand it to Boston. The 40-year-old band knows its audience.

'Hamilton' will dominate the Tonys, but who else?

Of course “Hamilton” will cut a wide swath through Sunday’s Tony Awards, but it may not be enough to land a record number of wins. “The Produc…

REVIEW: 'School of Rock' transfers nicely to the stage

The sun has come out for kid actors who want another show in which to ply their trade.

“Hamilton” didn’t break the record for most Tony Awards wins Sunday night but it did get more than one shot at the title. In the end, when Bar…

LOS ANGELES | The best thing about being in a hit musical like “Hamilton” is “getting to do things you like,” actor Daveed Diggs says.

Lin-Manuel Miranda, foreground, with the cast during a performance of "Hamilton," in New York.

Phillipa Soo and Lin-Manuel Miranda play the Hamiltons, Eliza and Alexander, in "Hamilton."