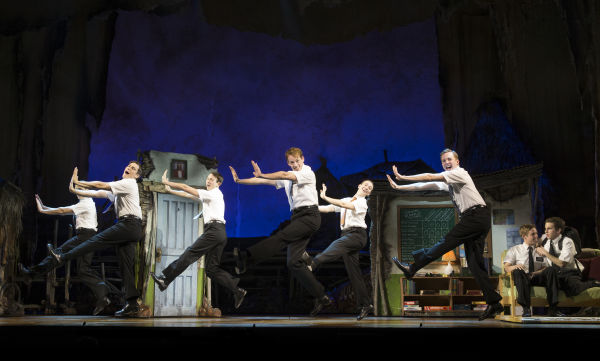 Members of the touring production of "The Book of Mormon" demonstrate how they "turn it off" when temptation comes calling. The show runs in Omaha through Oct. 20. 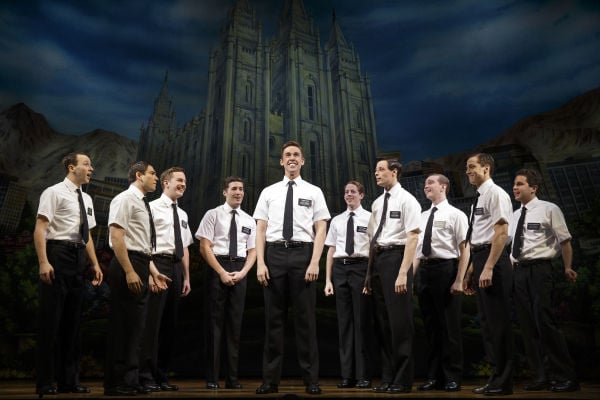 Nic Rouleau, center, plays Elder Price, the gung-ho member of the Mormon church sent on a mission trip in the musical "The Book of Mormon." 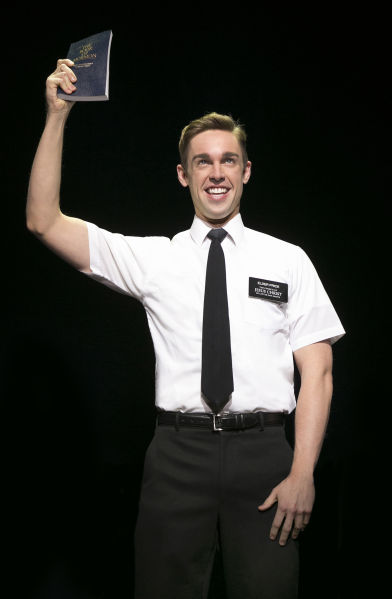 Nic Rouleau stars as Elder Price in "The Book of Mormon," the Tony-winning Broadway musical. Rouleau has appeared in the Broadway, Chicago and touring productions of the show.

OMAHA | You'd think there would be stunned silence when "The Book of Mormon" gets to its, um, raunchier bits.

Instead, a raised-on-"South Park" generation roars -- and deservedly so.

The irreverent musical is slightly more sinful than a maple-glazed donut and twice as much fun.

Calling the Orpheum Theatre in Omaha home until Oct. 20, the second national touring company has plenty of energy, lots of life and more than a couple of unexpected twists. Thanks to an inspired bit of casting, the interplay between two Mormon missionaries isn't lopsided.

The shift brings new life to a show destined to be around for decades.

Written by "South Park's" Trey Parker and Matt Stone, the Tony-winning musical follows two Mormon elders to Uganda where they're assigned to convert natives. Hardly something out of "The Lion King," this Africa is filled with disease, poverty and a dictator willing to go to extremes to get his way.

When traditional methods don't mint new Mormons, Cunningham takes matters into his own hands and reinterprets the good book. That brings attention from the church and an awakening that's among the funniest in theater history.

Parker and Stone borrow liberally from lots of shows (not the least of which is "The Lion King"), getting their biggest laughs from a piece that could have been plucked out of an African edition of "The King & I."

Pierce Cassedy gets the first big a-ha moment as Elder McKinley, teaching the others how to "turn it off" when they get sinful thoughts. He tap-dances the story into high gear and it never stops moving. Parker and co-director Casey Nicholaw have briskly paced this to cruise from one high point to the next. It's to their credit that it reaches audiences on so many levels.

While the "friendly" natives are frequently difficult to understand (blame the sound system), James Vincent Meredith as Mafala Hatimbi and David Aron Damane as the killer general always resonate. They're the two battling forces making life miserable for Price, a missionary just hoping to make his mark and get to Orlando.

Although Andrew Rannells, the original Elder Price, practically owns the role, Rouleau has found a way to give it a unique, equally impressive stamp. His "I Believe" has more depth; his moments in caffeine hell, more angst. When he delivers the show's valedictory, it sticks. Holmes, too, is inspired casting -- more Jon Cryer than Josh Gad.

Syesha Mercado -- as Hatimibi's daughter (who texts on a manual typewriter) -- doesn't have the vulnerability that's necessary for something life-changing. But she hits the big notes and makes the relationship with Cunningham believable.

Although grandma may still blanch at its language, situations and ungodly behavior, she'll have to admit "The Book of Mormon" is a great monument to the power of faith.

It's bright, it's funny and, best of all, populated by a heavenly, talented cast.

"The Book of Mormon" runs through Oct. 20 at the Orpheum Theatre in Omaha. A ticket lottery precedes each show; more information is available at omahaperformingarts.org.

What: "The Book of Mormon"

Tickets: Ticket Omaha box office in the Holland Performing Arts Center or at 866-434-8587.

Details: Before each show, there will be a lottery for $25 same-day tickets. The lottery will be conducted at the Orpheum Theatre box office each performance day.

When Nic Rouleau joined Broadway's edition of "The Book of Mormon," cast members told him he shouldn't get too used to the adulation.

The Book of Cody: 2012 USD graduate claims leading role in 'Book of Mormon'

LOS ANGELES | Imagine imitating your boss on a weekly basis.

Members of the touring production of "The Book of Mormon" demonstrate how they "turn it off" when temptation comes calling. The show runs in Omaha through Oct. 20.

Nic Rouleau, center, plays Elder Price, the gung-ho member of the Mormon church sent on a mission trip in the musical "The Book of Mormon."

Nic Rouleau stars as Elder Price in "The Book of Mormon," the Tony-winning Broadway musical. Rouleau has appeared in the Broadway, Chicago and touring productions of the show.