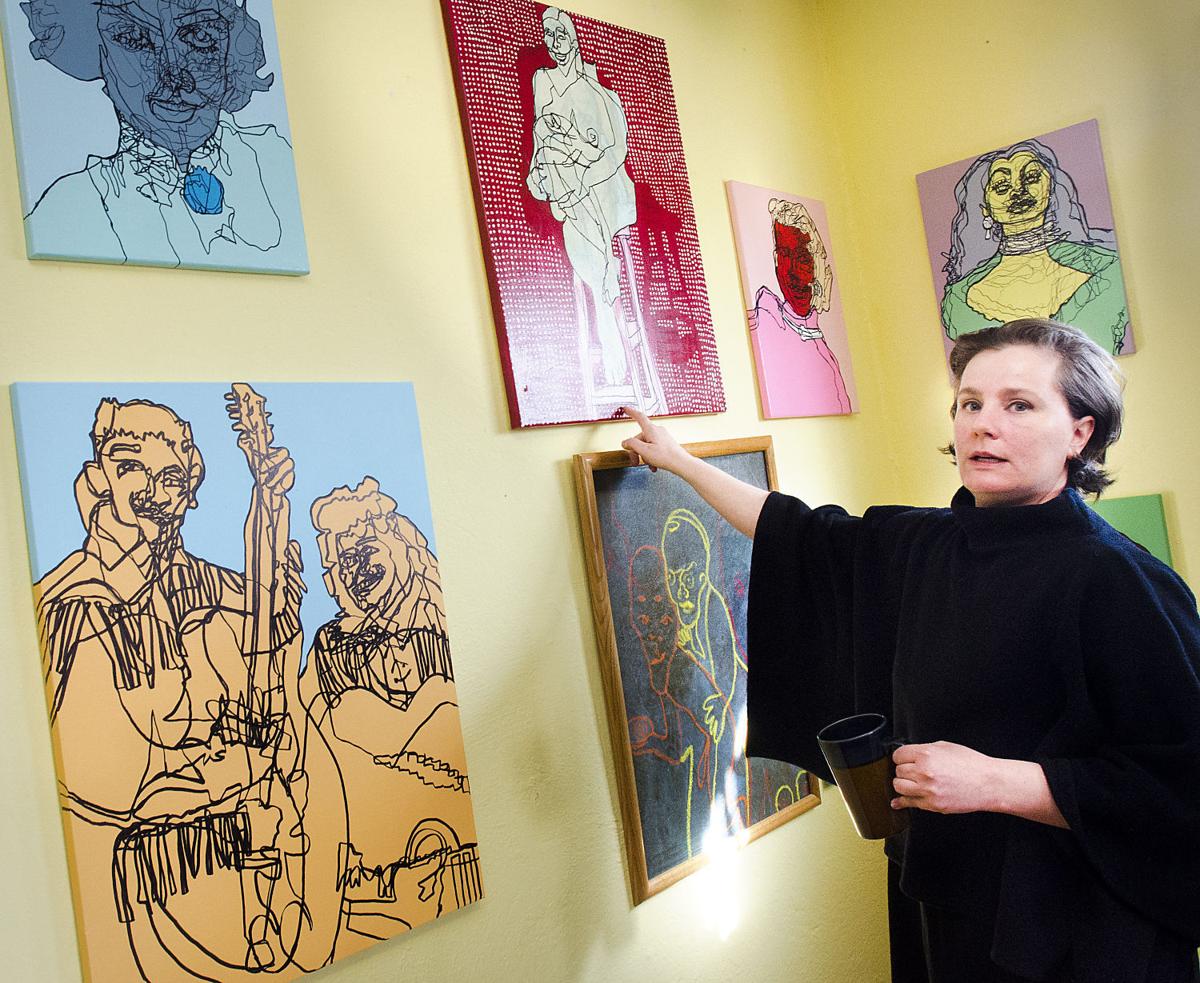 Artist Jodi Whitlock created a series of blind contour drawings from vintage glamour shots. The works will be on display at Vangarde Arts, 420 Jackson St., through April 14. 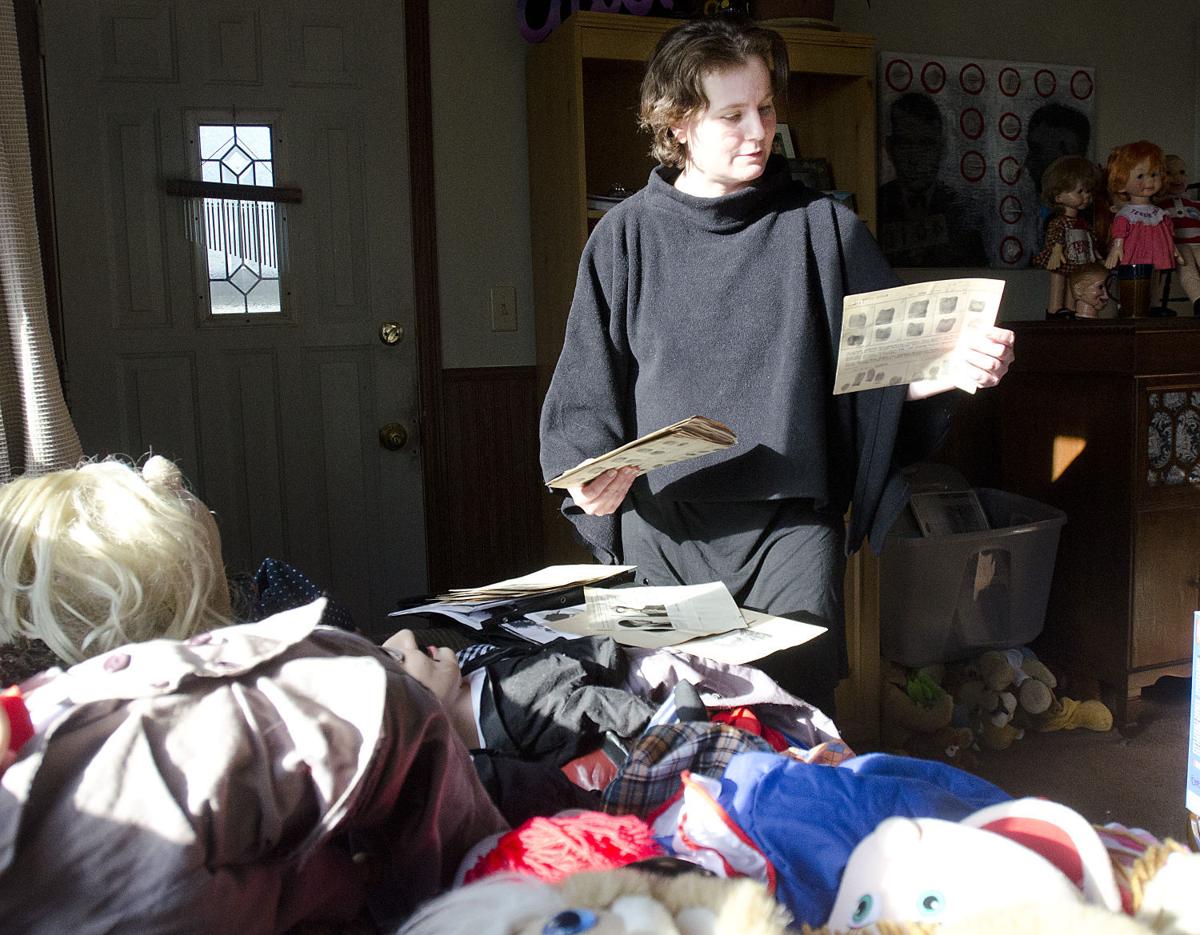 SIOUX CITY | Instead of watching the movements of a Sharpie marker creep across the canvas, the artist keeps her eyes on the women in the photographs. Their sultry smiles turn into sightless scribbles, debasing each beautiful face.

Jodi Whitlock found the old glamour shots at a downtown antique store. Instead of trying to paint a realistic representation, she created works of art that look as distorted as the world may feel.

About 30 of her blind contour drawings will be displayed at Vangarde Arts through April 14. An opening reception begins at 6 p.m. Saturday with musical performances by Psychic Greetings, Sammy Dimera, Heathen and Nameless. It is free to attend.

The solo show at the Jackson Street venue was part of a prize package from a competition in November. A challenge went out for artists to create works with a musical theme on a 16-by-20-inch canvas. Whitlock and her fiance, David Hansen, won by collaborating on a mixed media piece of experimental art that can be plugged in and played like an electric guitar.

It was good timing. Whitlock was hoping to do a show soon anyway as her paintings piled up. She had started the blind contour drawings a couple years ago, but then, when she got pregnant, she stopped.

“I did commissions for the money, but I didn’t feel like painting,” she said.

Her swollen body ached, and she was either nauseous or exhausted. She thinks age might have played a part in diminishing her motivation.

Whitlock turned 40 a week before her son was born but bounced back and returned to her unfinished works at the end of August.

Whitlock needed a palate cleanser between pregnancy and traditional painting. This kind of reckless abandon shows a departure from perfection. It’s a conscious release of control, almost like an act of meditation.

The maelstrom of marks on the colorful canvases mirror the essential strangeness that took her from a life as a free-spirited, vegetarian, drifter hippie who carried all her belongings in a duffel bag, made candles and sewed her own clothes, to a fairly settled full-time artist and teacher in her hometown.

At one point, she spent a year hopping around the country, living in three different states. Once her first child was born, though, it was harder to maintain this nomadic existence, working “crappy jobs” wherever the road would take her. She decided to pursue naturopathic medicine instead and wound up studying nursing at Briar Cliff University.

“I was thinking about pre-med,” she said. “Then, I saw the cadaver. It shocked me. I was like -- I can’t do that. You know how they have to dissect and stuff? There’s no way I could do that. I’m too visual. I’d remember it, and it would just be there forever.”

She switched her major to art and went on to earn a graduate degree in painting from the University of South Dakota. There, she pulled inspiration from mug shots that she found at a flea market. Each tattered card from the 1920s features a full set of fingerprints and black and white photographs of the sullen subject.

She loves painting people’s faces whether they look funny, guilty or glamorous.

Working from old photographs only adds to the allure. Like walking through a cemetery, the faces of fading memories fill her with wonderment.

“All you get is this little glimpse into their lives,” she said. “It’s capturing a moment.”

Princess Diana left quite an inheritance for her sons

Princess Diana left quite an inheritance for her sons

A canvas once covered in 1’s, 2’s, 3’s and 4’s now features an artist’s idea of what Alice in Wonderland’s Cheshire cat would have looked like in his younger days. The kitten tangled in a ball of yarn gets a big grin.

Writing a novel seems like a formidable task. It can take months or even years to write chapter after chapter of text and it could take even l…

As we drive our morning commute five days a week, we pass by the same  buildings, stores and landmarks. Most of us don’t have the time to admi…

The animator, director and storyboard artist of shows like "Scooby Doo," "The Flinstones" and "The Beatles" will be at Vangarde Arts for three days.

Alex Wakefield was likely a baby when he started watching races from his dad’s lap.

Artist Jodi Whitlock created a series of blind contour drawings from vintage glamour shots. The works will be on display at Vangarde Arts, 420 Jackson St., through April 14.