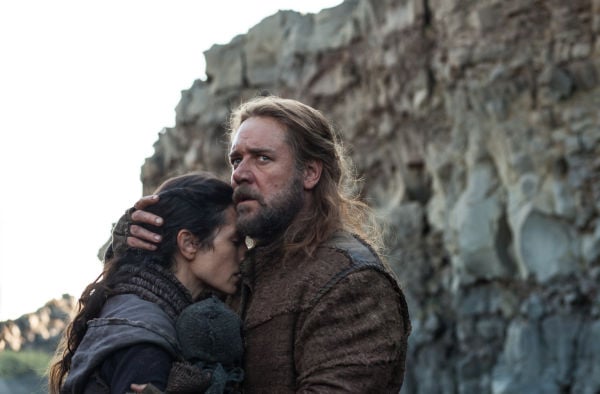 Jennifer Connelly and Russell Crowe are pictured in a scene from "Noah." 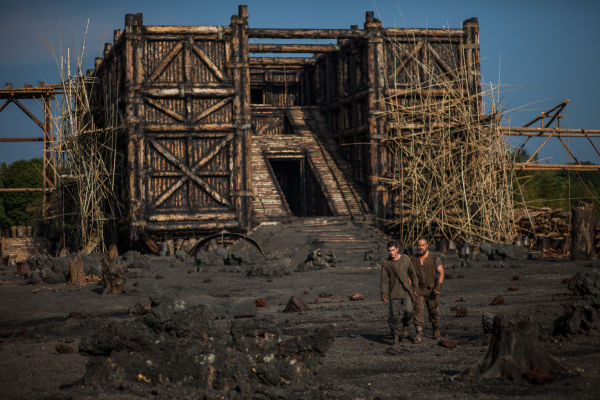 Logan Lerman, left, and Russell Crowe are pictured in a scene from "Noah."

MEXICO CITY | A lot of people think they know what the real story of the movie “Noah” should be.

They are likely some of the same people who think they know what the real story of the man Noah is.

Darren Aronofsky, the director of the new movie about the man and the great flood, is ready to rain on what he believes is their misinformed parade.

Rarely in recent years has a movie generated as much polarizing opinion before its release as “Noah,” a $130-million drama set to arrive in U.S. theaters on March 28. The film stars Russell Crowe as the man who builds a giant ark as God wipes a sinful mankind from the planet; Jennifer Connelly plays his wife, Naameh, with Anthony Hopkins as his grandfather, Methuselah.

The movie is the target of a fatwa from a leading Egyptian Sunni Muslim institution because Noah is mentioned in the Koran and therefore not suitable for artistic depiction. Qatar, Bahrain and the United Arab Emirates have banned the film, with other Middle Eastern countries expected to follow. Closer to home, where in theory there is more religious tolerance, “Noah” has already been attacked by the Christian right for its creative license.

Paramount Pictures, which co-financed “Noah” with New Regency and is distributing the film, believes much of the censure has come from people who haven’t seen the film and were responding to secondhand accounts of an outdated screenplay.

One conservative Christian organization, the National Religious Broadcasters, threatened to boycott the film unless Paramount put out a marketing disclaimer. Without telling Aronofsky, the studio decided to modify advertising materials by saying the movie was “inspired by” the story of Noah rather than be seen as literal scripture.

At the center of the storm stands a weary Aronofsky, whose strongly personal films include “Black Swan” and “The Wrestler” and who is a veteran of tough battles with studios and executives over the years.

The 45-year-old filmmaker has been thinking a lot about Noah ever since he wrote a prize-winning poem about the Bible story called “The Dove” when he was 13.

He and screenwriter Ari Handel have been working on the “Noah” script for a decade, burying themselves in research — “I read everything,” said Aronofsky, who can pass for an armchair religious scholar — and consulting with an array of Jewish and Christian theologians.

Now that the 2-hour-17-minute film has been screened, the result of their investigations is obvious: “Noah” is one of the most overtly spiritual movies any big Hollywood studio has made in years (both the current “Son of God” and Mel Gibson’s “The Passion of the Christ” in 2004 were independently produced).

“The creator made Adam in His image, then placed the world in his care,” is one of the very first lines of dialogue in the film.

And even if Crowe has the lead role, the real star of the movie is the concept of original sin.

Audiences seem intrigued by the premise. Two weeks ahead of the film’s domestic debut, moviegoers’ interest is strong.

The forthcoming debate around the film will likely focus on how the filmmaker has expanded the Noah story into a full-length film. As Aronofsky points out, the Genesis tale of Noah, for all of its enduring power, is fleeting in the Bible, and Noah doesn’t speak until a dove returns with an olive branch. That doesn’t make for much of a movie.

“When you really look at the story in the Bible, there’s very, very little information,” Aronofsky said. “It’s four chapters long. No one speaks until the end. And the Noah character doesn’t really have an arc — with a ‘c.’ But the more you read it, the more interesting clues there are. There are many, many hints at things.”

The Rebel Wilson who stole films and influenced people kind of sleepwalks through “Senior Year.”

DVD REVIEW: 'The Batman' is worth the time it takes to unpack

There’s a second edition of “The Batman” coming. But if you’re planning to watch the first (it's out this week on DVD), you might be done in t…

Listen to Streamed & Screened: It's a slow period between blockbusters "Dr. Strange" and "Top Gun: Maverick," but "Men" shouldn't disappoint.

This week on the Streamed & Screened movie podcast, ft. the Journal's Bruce Miller & Jared McNett: Art-house horror aficionados will be lining up for Men, the buzzy new movie from Alex Garland. Also on tap: Downton Abbey: A New Era, a reboot of Chip 'n Dale: Rescue Rangers & a collection of Jackass outtakes.

REVIEW: 'Dr. Strange' tries to tie up a lot of loose ends in 'Multiverse of Madness'

The Marvel universe is now an at-will state.

In the latest installment of the award-winning Streamed & Screened, ft. the Journal's Bruce Miller & Jared McNett, we talk about the new Dr. Strange movie, get excited for the upcoming Avatar sequel and chat with four-time NBA champ John Salley.

Getting to create an animated character is a bit like being a kid in an arcade, says Samatha Vilfort, one of the artists behind “Encanto’s” Mirabel.

'I was scared': Amber Heard's sister says Johnny Depp laughed as he held a dog out of a car window

Lizzo lands HBO Max doc about her rise to superstardom

Lizzo lands HBO Max doc about her rise to superstardom

Jennifer Connelly and Russell Crowe are pictured in a scene from "Noah."

Logan Lerman, left, and Russell Crowe are pictured in a scene from "Noah."