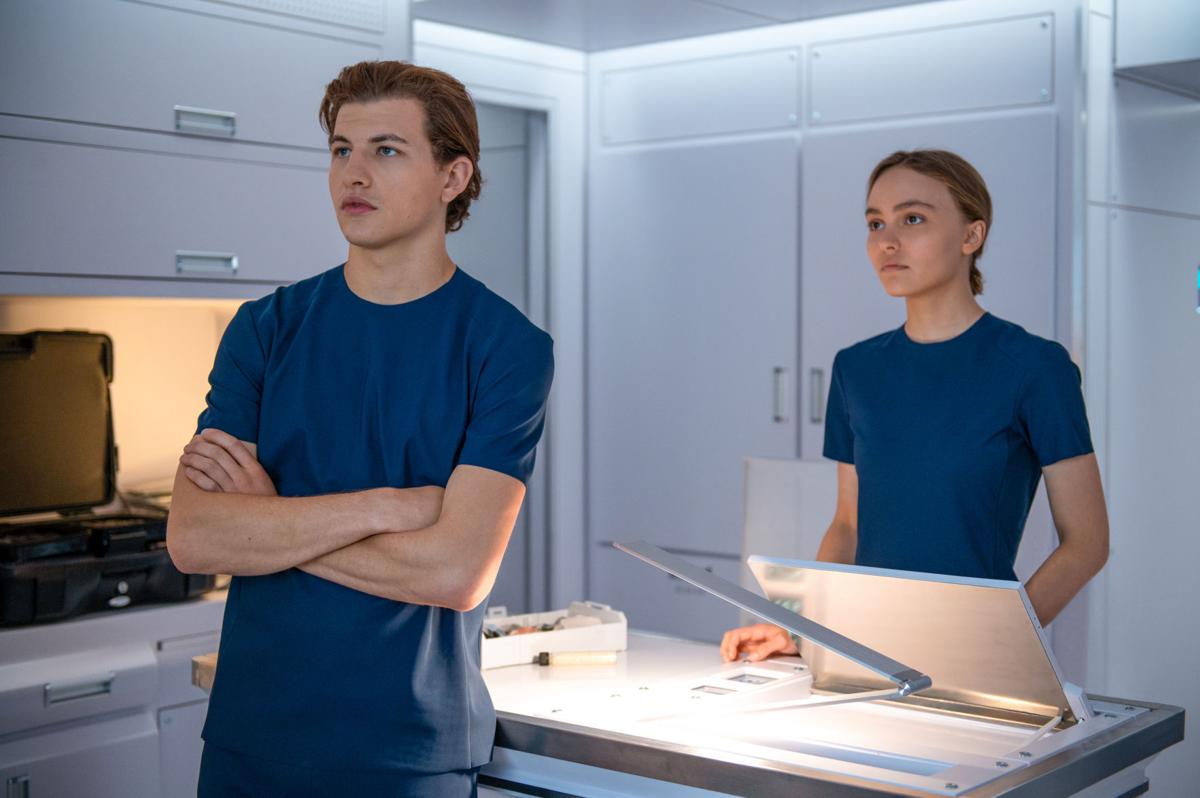 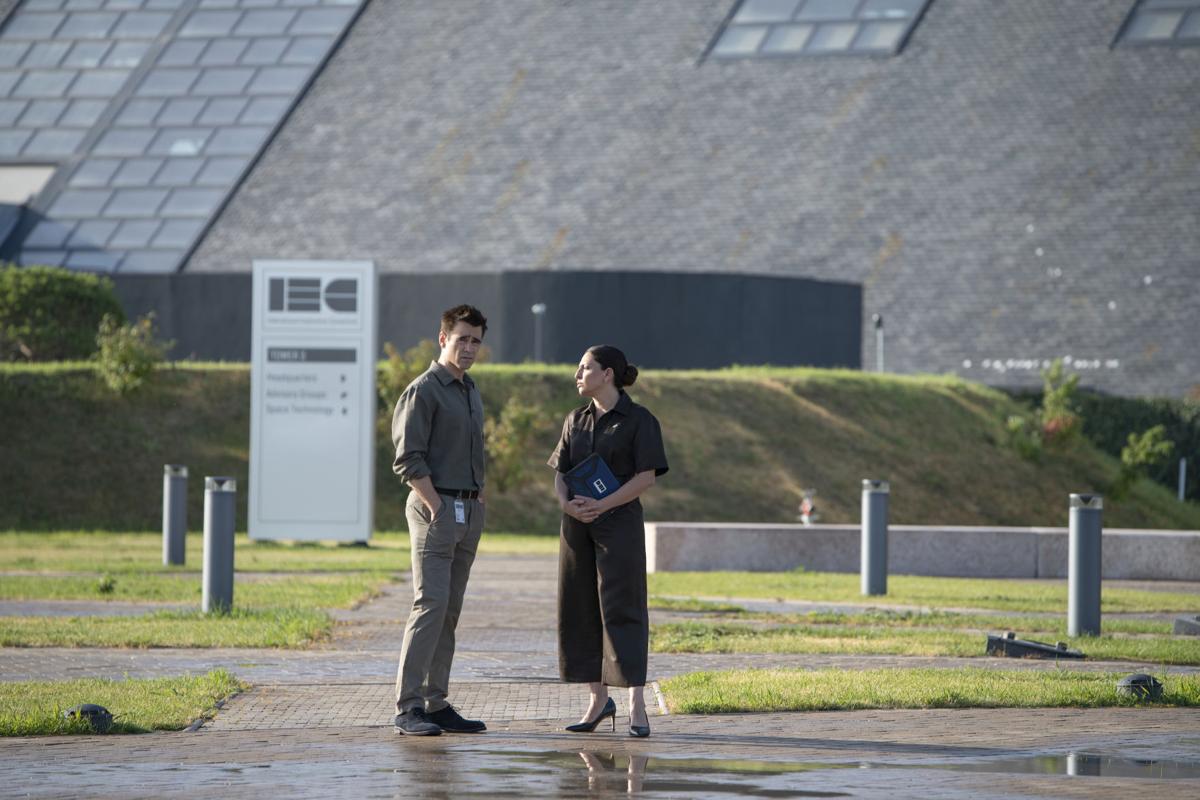 Colin Farrell as Richard and Veronica Falcón as Marianne Sancar star in "Voyagers." 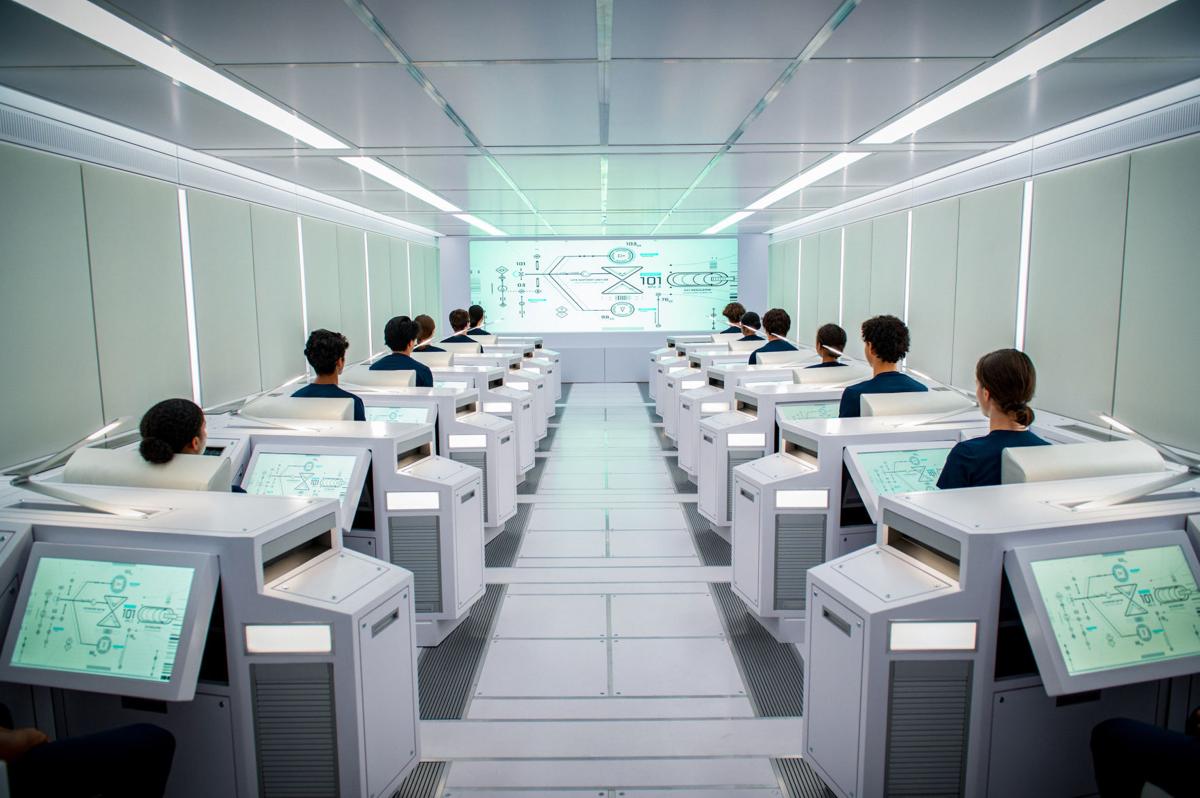 Sterile work environments create a sense of calm in "Voyagers."

It takes 86 years to get to a place that can support new life, according to “Voyagers.” But it only took two months for the film to land on the DVD market.

Promising a sexy space trip with hot twentysomethings, director Neil Burger never quite delivers the drama that it should be.

Perhaps it’s the blue pills everyone takes. Able to suppress emotions, they keep space travelers in check. When two friends, Christopher (Tye Sheridan) and Zac (Fionn Whitehead), learn the power of The Blue, they decide to go without it. Soon, they realize they can get mad, get happy, get sad.

That prompts plenty of action, but also a Sharks vs. Jets mentality that pits friend against friend.

In no time at all, this “Lord of the Flies” in space is reduced to races around sterile hallways.

Because the “adult in charge” (nicely played by a resigned Colin Farrell) isn’t around, it’s summer camp without counselors. But how do you warm to young rebels when they never exhibited any personality before the “change”?

Also written by Burger, “Voyagers” looks like a typical space film. It just lacks substance. Sheridan shows some intelligence; Whitehead goes overboard. And that’s essentially what this devolves to – catch and release. When left to their own devices, the travelers decide to choose their leader. It doesn’t take an insurrection to let you know how this is going to go: More fighting, more screaming, more puzzled looks. Lily-Rose Depp plays the woman caught between the two friends. She tries to take the high road but, soon, there’s chaos.

Considering it stars hot young actors, “Voyagers” doesn’t have a lot of hot action. It’s like working at an Amazon fulfillment center.

A few more traumas before the big showdown are necessary, particularly since they would let you know who deserves a leadership role. As is, “Voyagers” is a free-for-all, devoid of succession plans that could have put a lot of nonsense out of reach and solved problems a free and fair election doesn’t.

Frank Bonner, star of 'WKRP in Cincinnati,' dead at 79

If you missed some of the bigger limited series last year (and how did that happen?), several are making their way to the DVD market. Now, ins…

If you’ve tired of repeated “Mulan” viewings, you might want to venture on to “Raya and the Last Dragon.”

“The Father” is a difficult film to watch – not because it strays as much as its lead character’s mind, but because it could be the future we …

DVD REVIEW: "Godzilla vs. Kong' recalls when monsters were the real threat

When history is written, folks may remember the film that got them back in theaters was “Godzilla vs. Kong.”

Colin Farrell as Richard and Veronica Falcón as Marianne Sancar star in "Voyagers."

Sterile work environments create a sense of calm in "Voyagers."