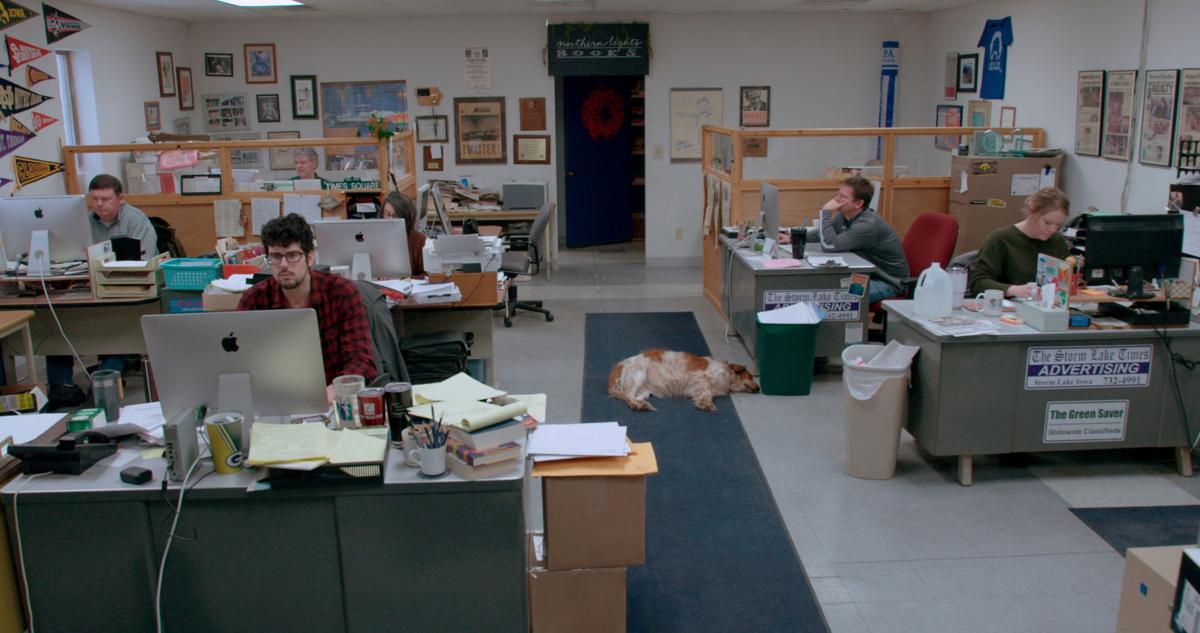 The staff of the Storm Lake Times, featured in "Storm Lake." 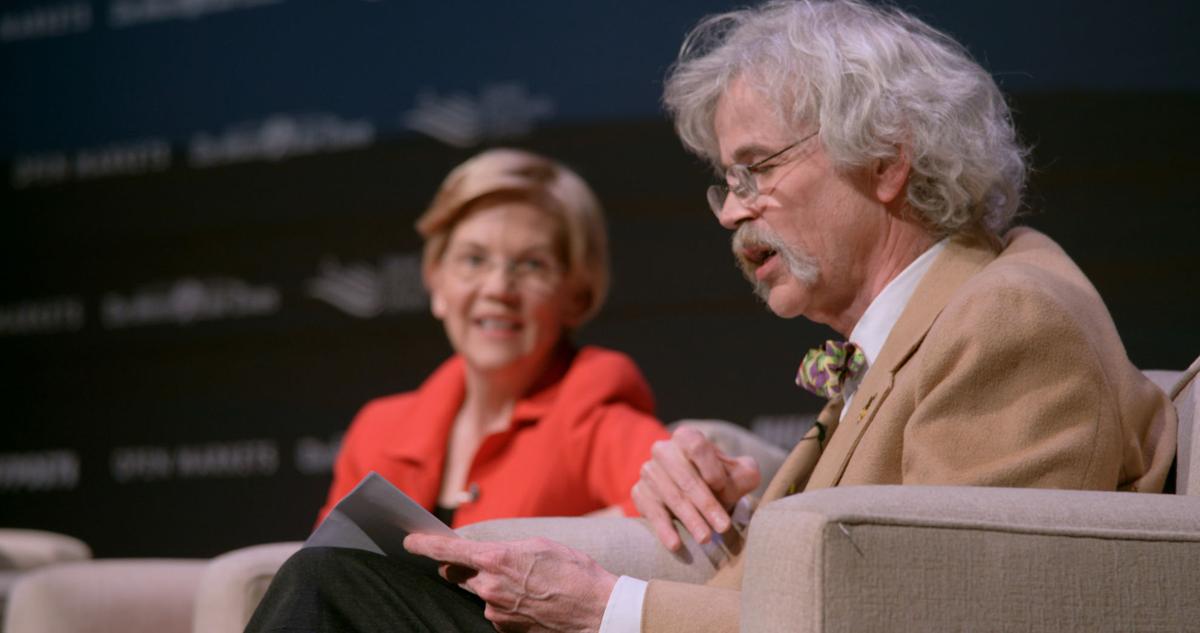 Sen. Elizabeth Warren visits with Art Cullen prior to the Iowa Caucuses. The forum is featured in "Storm Lake," a look at Cullen's family newspaper. 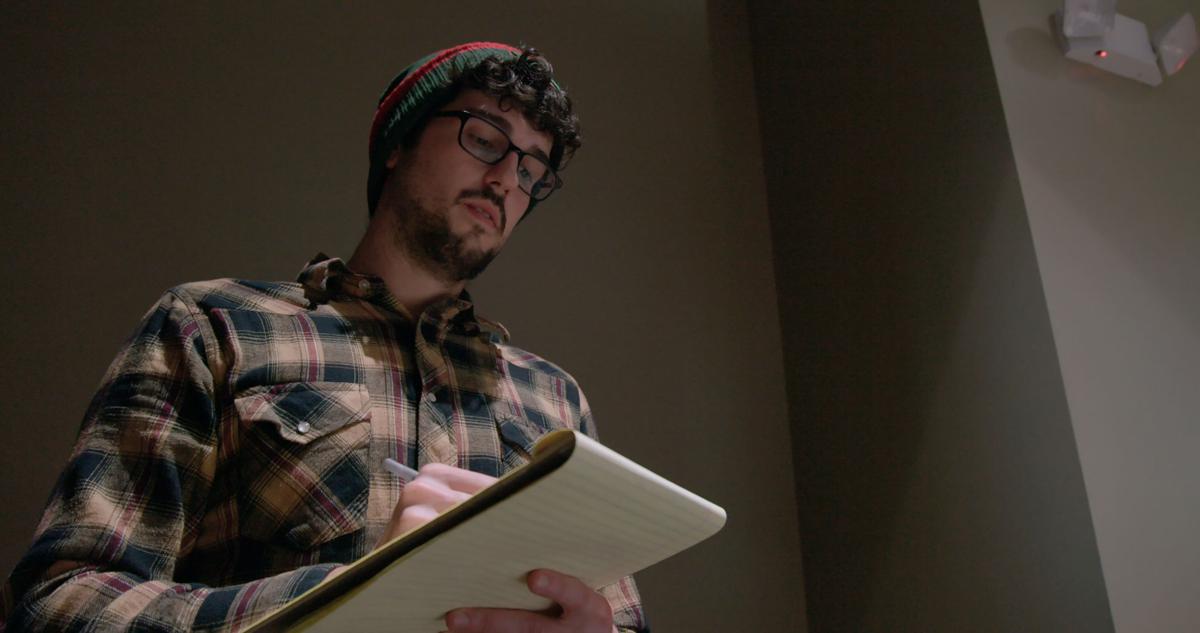 Tom Cullen does much of the hard news reporting for the Storm Lake Times. He's featured in "Storm Lake." 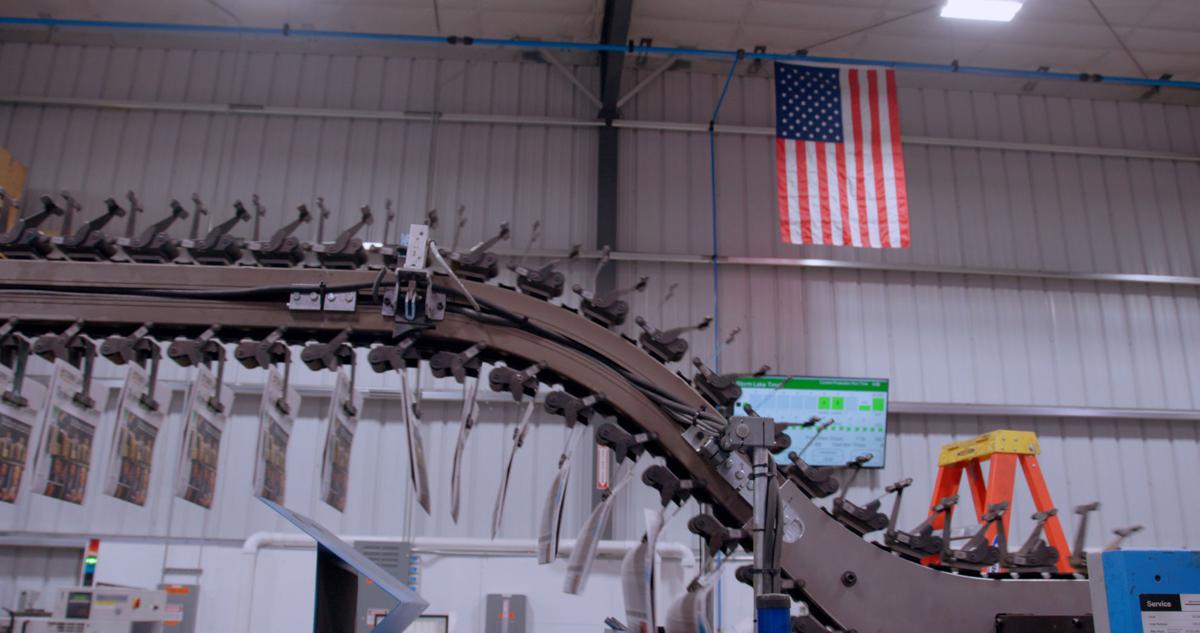 Copies of the Storm Lake Times roll off a conveyor belt. The paper's process is detailed in "Storm Lake." 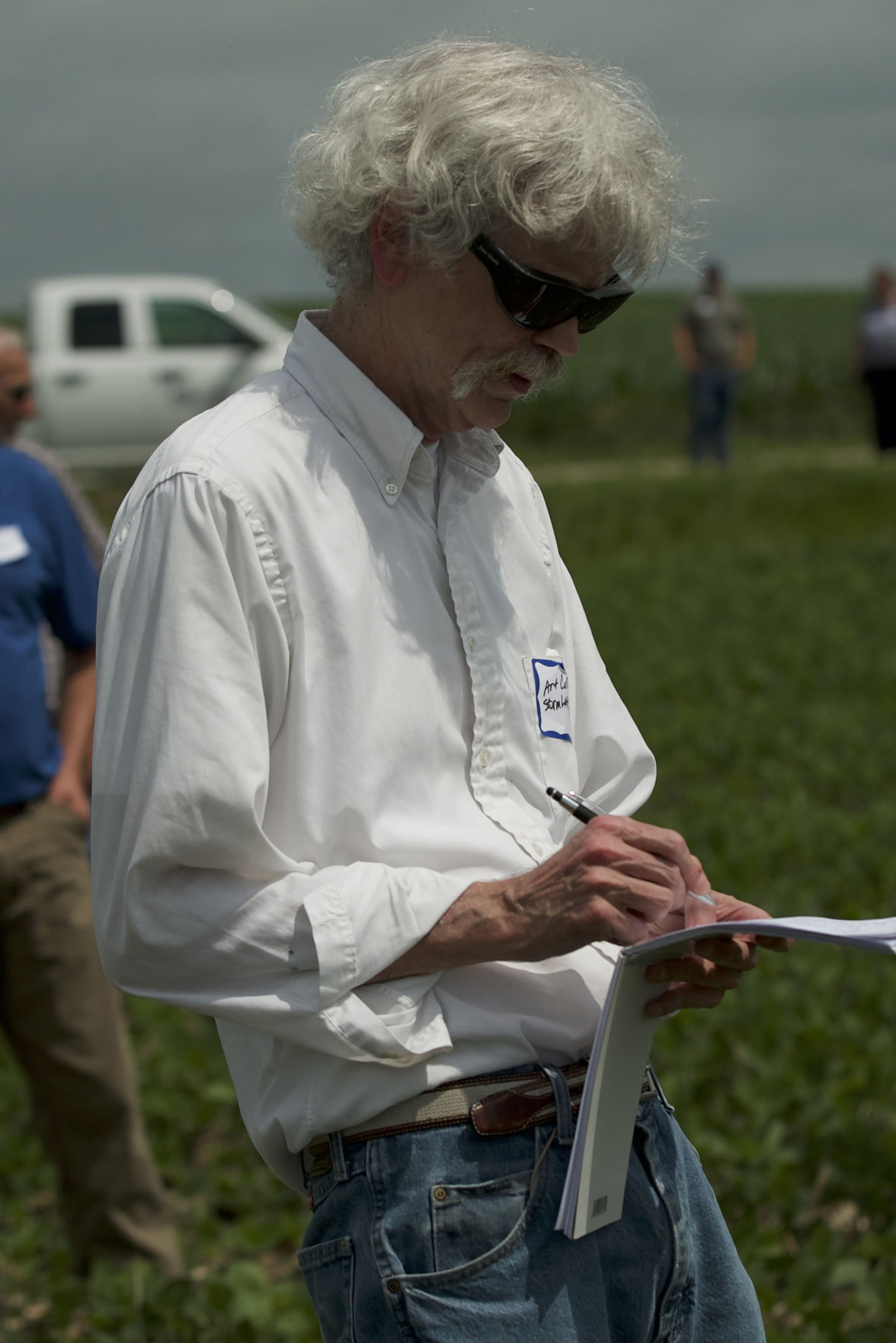 Art Cullen takes notes in the field during a scene in "Storm Lake."

Everyone who paints all media with a broad “fake news” brush needs to see “Storm Lake,” a telling documentary about the hard work that goes into community journalism.

Chronicling the day-to-day life of the Storm Lake Times, the film shows how a family owned, twice-weekly publication struggles to stay afloat.

For Editor Art Cullen, his wife Dolores and son Tom, this isn’t about the boldface names who come to town in search of a presidential nomination. It’s about the residents who want to share their recipes, celebrate their victories and keep their employers accountable.

Cullen, who won the Pulitzer Prize for a series of editorials challenging corporate agricultural interests, attracted attention when the award came his way, but it didn’t translate into more ads or subscriptions. It just meant East Coast journalists realized others were out there fighting the good fight.

In the film, directors Jerry Risius and Beth Levison follow the Cullens and their staff as they go through the daily paces. As deadline time nears, Art barks orders. “Every hour late costs us $100,” he says gruffly. Because small-town journalism isn’t a license to print money, that matters.

Cullen writes his own headlines, lays out his own pages and trims the copy that flows into his computer.

The bulk of the legwork is done by Tom, who may be the film’s unsung hero. Whether he’s questioning Sen. Charles Grassley or observing Iowa caucuses, Tom has his eye on what residents want – and need – to know. When he tries to convince dad they should lean into new media (he suggests a podcast), dad rebels. “It’s a bit of a roller coaster being Art Cullen’s son,” he says.

Risius and Levison show Art in full new-millennium Mark Twain mode hosting a panel of presidential candidates. But they also trek along as Dolores covers a Pork Princess appearance at an elementary school.

“Storm Lake” shows the town, too, and discusses how agriculture changed its demographics. Boasting a large immigrant population, it now has different needs and concerns. When the Iowa Caucuses unfold, the film’s directors lean into the shift and chronicle how the Times folks cover them. The process, alone, should silence media critics. This is how the sausage is made, print style.

Cullen’s brother, John, talks about the finances; an advertising rep weighs in on how difficult it is to get advertising in a community that has seen businesses close. Life isn’t easy but journalism is in the Cullen DNA. “We’re putting out a good paper,” Art says. “Ultimately, that will pay.”

Filmed by others, “Storm Lake” could have looked like a visit to Lake Wobegon. But Risius and Levison understand the hold community journalism has and aren't afraid to show its warts.

They dig into life during the COVID-19 pandemic, too, and humanize Art just when you think he’s going to become a symbol.

“Storm Lake” isn’t a valedictory for folks in the trenches. But it is proof the process can’t be readily dismissed.

It's one of the best looks at small-town life and how it's possible to silence naysayers just by doing good work.

REVIEW: 'Come From Away" reveals light in a very dark world

While all the world’s attention was focused on New York City two decades ago, another story was unfolding in Gander, Newfoundland.

REVIEW: 'Shang-Chi' is a ringer in the new Marvel universe

If you look at “Black Widow” and, now, “Shang-Chi and the Legend of the Ten Rings,” you’ll see a stronger family influence in the latest strin…

If a resort offers you a secluded beach option, ignore it.

The staff of the Storm Lake Times, featured in "Storm Lake."

Sen. Elizabeth Warren visits with Art Cullen prior to the Iowa Caucuses. The forum is featured in "Storm Lake," a look at Cullen's family newspaper.

Tom Cullen does much of the hard news reporting for the Storm Lake Times. He's featured in "Storm Lake."

Copies of the Storm Lake Times roll off a conveyor belt. The paper's process is detailed in "Storm Lake."

Art Cullen takes notes in the field during a scene in "Storm Lake."