Become a Member
Read Today's E-edition
Share This
REVIEW: Will Smith emerges as the champion of 'King Richard'
0 Comments
Share this
1 of 2

Will Smith stars in "King Richard," the story of Serena and Venus Williams' demanding dad and coach, Richard Williams. 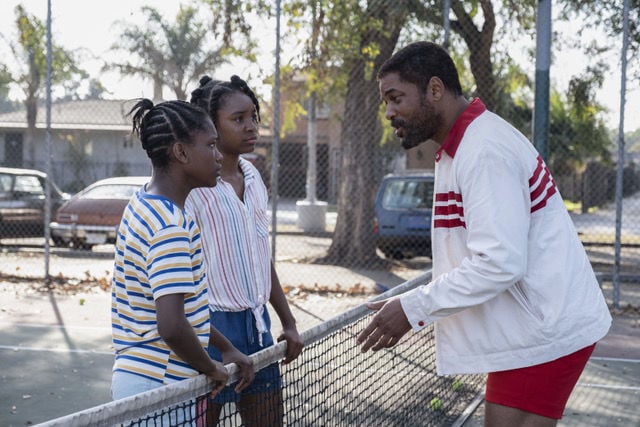 Richard Williams (Will Smith) teaches the basics of tennis to his daughters in "King Richard," the story of Serena and Venus Williams and their father.

As the father of tennis greats Venus and Serena Williams, he makes it highly understandable how anyone could coach his daughters to superstardom. Shutting out doubt, he runs them through their paces on a raggedy Compton tennis court, pursues coaches with a Viagra salesman’s vigor and doesn’t back down when the big dogs come courting.

It’s an amazing performance that answers so many questions and, yet, provides room for others to shine, too. As his no-nonsense wife Oracene, Aunjanue Ellis is every bit his equal. She isn’t afraid to call out his behavior or let Serena shag balls when pros show interest only in Venus.

Both are driven parents who don’t let others get in their way.

Director Reinaldo Marcus Green offers plenty of evidence to support their methodology. Even though Richard Williams used homemade videos to tout his daughters, the two athletes had the goods to merit attention. That came from dad practicing with them for hours in less-than-stellar conditions. Williams got his coaching skills by reading countless books and magazines and by studying the masters. His is an intriguing route – one other parents couldn’t maintain.

More important, Venus (Saniyya Sidney) and Serena (Demi Singleton) had each other – as competition and comfort. That must have played a role in their growth and convinced dad their talent wasn’t a fluke.

While the film doesn’t go beyond Venus’ big debut, there’s enough drama before the match against Arantxa Sanchez-Vicario to carry this “Rocky” story to a fitting conclusion. It’s an early look at a multiple-episode drama, but it works.

“King Richard” also touches on the racism the family encountered and shows how insulated the world of tennis really is. Green isn’t afraid to drop names (and include some of them in the process) or show what happens when an athlete is courted for superstardom.

As early teachers, Tony Goldwyn and Jon Bernthal are fascinating to watch. While Goldwyn’s Paul Cohen isn’t about to bow to Williams’ expertise, Bernthal’s Rick Macci is more than eager to curry favor. The yin/yang pull shows it took someone with determination to stand up to both of them.

Tennis followers may remember a different Richard Williams (one who was more Don King than even he would admit), but Smith gives him plenty of personality and will power. In the process, he gets back the best performance of his career.

Surprisingly, “King Richard” doesn’t require an interest in tennis, just a desire to see great talent succeed on a spectacular level. It's a Grand Slam event.

Lin-Manuel Miranda owes a debt of gratitude to “Rent” creator Jonathan Larson and, in “Tick, Tick…Boom!”, he pays it back fully.

Nothing captures the claustrophobia of royal life better than “Spencer.”

Will Smith stars in "King Richard," the story of Serena and Venus Williams' demanding dad and coach, Richard Williams.

Richard Williams (Will Smith) teaches the basics of tennis to his daughters in "King Richard," the story of Serena and Venus Williams and their father.