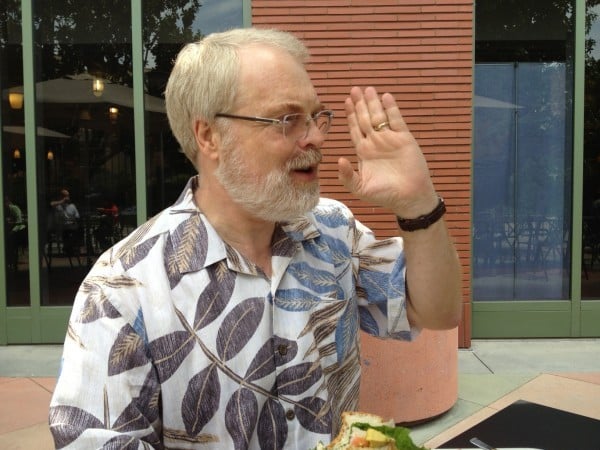 Ron Clements at the Disney Animation Studio in Burbank, Calif. 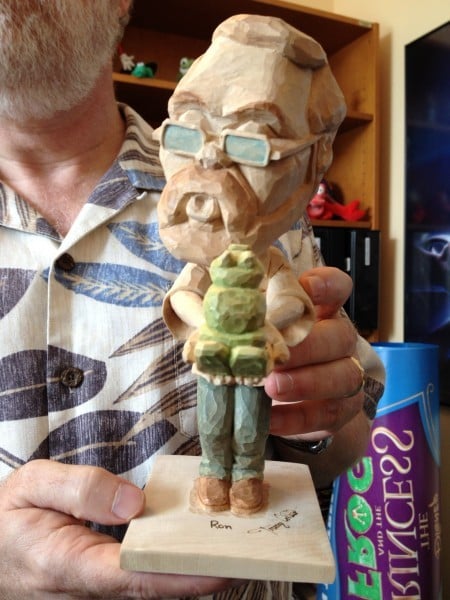 Following completion of "The Princess and the Frog," Ron Clements was given a bobblehead of himself with the frog. 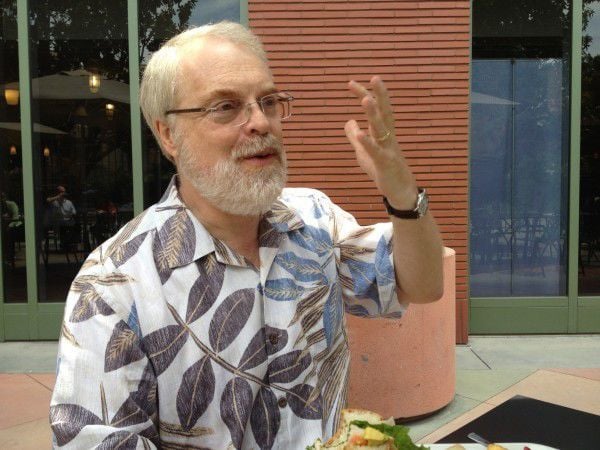 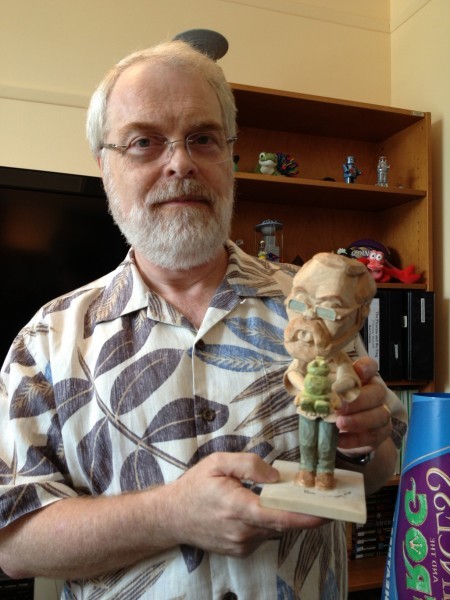 Ron Clements and a bobblehead of himself made by one of his staffers following completion of "The Princess and the Frog." 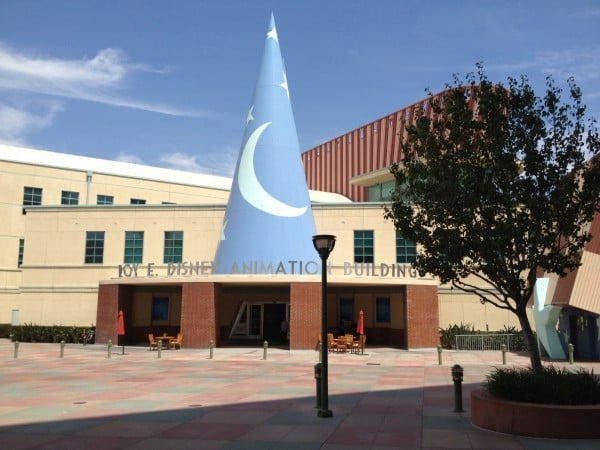 The headquarters for Disney Animation is located in Burbank, Calif. It's also where Ron Clements works. The hat used to be Roy Disney's office. Now, it's a conference room. 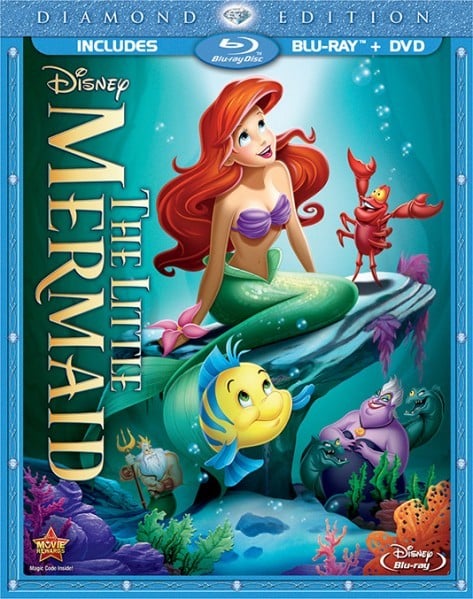 "The Little Mermaid" is slated for rerelease in theaters and on DVD.

BURBANK, Calif. | On the third floor of the Roy E. Disney Animation Building, Ron Clements has a coveted window office.

There, stacks of scripts fill his bookshelves. Posters from some of his biggest films cover his walls. A Ron Clements bobblehead -- a reminder of his last release, "The Princess and the Frog" -- sits on a shelf.

But all that is of little consequence now that he and longtime writing, directing and producing partner John Musker are in pre-production for their seventh film, an untitled original musical.

"We're not sure if this will be our last one," he says during lunch at the company cafeteria. "They take so long and there are a lot of young directors coming up. The bulk of the work is down the line, so we'll see."

Now, he and Musker are working on the script, deciding the film's look and considering possible voice talents. It's an exciting time in their world but it's at least four years before the untitled movie will see the light of theaters.

Elsewhere in the building, animators are working on "Frozen," the company's big Christmas release, and the films that will follow. Like a college campus, the building (which features a huge Sorcerer's Apprentice hat as its landmark) buzzes with activity.

When Clements' film gets moved up on the production schedule, his office will move to the second floor where animators, effects artists, writers -- you name it -- fine tune the details. There, it's like something out of a Disney cartoon. Production officials sit in offices designed to look like the film's environment. "Frozen," for example, even has a room that resembles an ice cave, where creative types gather and share ideas.  Another office resembles a Scandinavian chalet. Photos of the characters dot the building's entry area and, naturally, it's a race against time to finish everything for a Nov. 27 release.

Clements and Musker had been working on another project after "The Princess and the Frog" but rights problems entered in "and all that went away. We were bummed for a little while and then went back to the beginning and pitched three new ideas."

To make sure there wouldn't be a similar problem, they decided to do something original, something not based on a book. "We've been developing this for two years. The projects are a lot of work and they take a lot out of you."

When the Sioux City native started at the Disney studio nearly 40 years ago, he had no idea his future would include "The Little Mermaid," "Aladdin" and "Hercules" -- three films mentioned in the second "golden age" of animation.

He didn't even know if he was going to keep his job. Based on a short film he created at KCAU (where he was a commercial artist), Clements got work at Hanna-Barbera, then saw an ad for a Disney recruitment program. He called, met with officials and was hired for a four-week trial period.

"It was like 'American Idol.' I had four weeks to do an animation test. They looked at your test and if it showed promise, you got another four weeks."

The first four "psyched me out. I barely made it through. But, based on the stuff I did the very last week, they let me stay."

In the second four-week period he did a rabbit sketch test for "Winnie the Pooh," then got a fairly elaborate assignment: animate Cruella De Vil, the villain in "101 Dalmatians." In a minute's worth of animation, Clements showed Cruella falling in a puddle of water, then exploding at her henchman. "He tries to stifle a laugh, she gets angry and explodes. I did the test because they had a character in 'The Rescuers' who I thought would be a fun character to work on."

That work attracted plenty of attention and got two of the Nine Old Men (as the original animators were called) to tell Clements how good they thought he was.

"That was the high point of my career," he says with a laugh. "It's all been downhill ever since."

In many ways, that moment was a passing of the torch. Those Nine Old Men were in their 60s at the time. This year, Clements celebrated his 60th birthday and will mark his 40th year with Disney in 2014.

Today, the Disney studio doesn't have such a simple feeder process. It gets applicants from hundreds of aspiring animators with elaborate sample reels.

Clements believes he arrived at the right time -- Disney was going through a transition and executives there questioned whether animation would even continue.

When Michael Eisner became the company's head, new emphasis was placed on animation and Clements and Musker became two of its first new go-to guys.

At a regular "gong show" (where employees could pitch ideas), Clements suggested a cartoon version of "The Little Mermaid." It got gonged, then revived two days later.

Now, as it nears its 25th anniversary, the film is widely credited with breathing new life in the studio and leading to "The Lion King," "Beauty and the Beast" and "Aladdin."

Slated to be released in 3-D, "The Little Mermaid" is a special film in Clements' life, but it's not necessarily what he would call his best.

"My best was probably that Cruella DeVil film," he says, then smiles.

Today, though, he and Musker are Disney's new cornerstones -- the guys who brought the company new life.

Oddly, they left the studio for a short period of time -- again, another period of transition -- and considered going to Dreamworks where former boss Jeffrey Katzenberg and Steven Spielberg were eager to hire them.

Then Disney bought Pixar, put its leader, John Lasseter, in as head of the animation department and "one of the first things he did was bring John and me back."

The move was a judicious one. Clements and Musker are as much a part of the company's history as anyone named Disney.

A dream come true? "It's more than that," Clements says of his career. "When I was 9 years old, I saw 'Pinocchio' in Sioux City and when I walked out of that theater, I said, 'That's what I want to do.' I went to the library and checked out anything I could find on animation, which was practically nothing except the coolest book by Bob Thomas called 'The Art of Animation.' I checked it out over and over again. I may have been the only person to check it out."

That showed him there was a career in cartoons. When he got to California, it convinced him others were in on the dream.

"Everybody hoped there'd be another golden age of animation but nobody knew if it would happen. And then it did. 'Mermaid' surprised everybody and it proved these weren't just movies for children. Adults could like them, too."

Now, there's even an Oscar given to the year's best animated film.

Nominated twice, Clements and Musker say it wouldn't be a bad thing if they won for their next film. But that's not the goal.

"Getting here was the goal," Clements says, surveying the office building. "Now, this is home."

About 'The Little Mermaid'

When Disney executives challenged their creative staff to come up with ideas for new animated films, Ron Clements headed to a book store and found Hans Christian Anderson's "The Little Mermaid."

"I started reading it in the book store and it seemed really cool and cinematic. I wondered why they never did anything with it. Then I got to the end and realized it was a dark, sad story and she died in the end."

Clements still did a treatment of it -- and gave the mermaid a name -- Ariel.

Why he chose the name is anyone's guess. But he says it could be related to the lead female in "Footloose" and the name just stuck.

Disney officials, though, turned it down initially because they thought it was too close to "Splash" and they were planning a sequel. When that didn't happen, "The Little Mermaid" got the green light and Clements and his directing, writing and producing partner John Musker got the boost of a lifetime.

Ariel's red hair, Clements insists, wasn't because he had red hair. "It made her stand out -- she was the fiery one in her family."

All of those films above and “The Black Cauldron”

“The Fox and the Hound”

Ron and his fellow producer/director/writer have made guest appearances in all of their films after “The Little Mermaid.” Like Alfred Hitchcock, they turn up in the most unusual places.

If the kids can't go to the castle, the castle will come to them -- or so the philosophy goes with Disney Live's touring production, "Three Cl…

REVIEW: 'Inside Out' educates while it entertains

In the 1960s, Walt Disney created a series of educational films that gave kids insight into science, health, you name it. If you hadn’t seen “…

If one city isn’t big enough to hold six superheroes, then you need to mash-up two, right?

'Walt Disney' pulls back the curtain on creativity

Walt Disney wasn’t a great artist, a strong director or a financial wizard. Instead, says composer Richard Sherman, he fancied himself a storyteller.

For the directors of “Moana,” backstage at “Hamilton” was the room where it happened.

Ron Clements at the Disney Animation Studio in Burbank, Calif.

Following completion of "The Princess and the Frog," Ron Clements was given a bobblehead of himself with the frog.

Ron Clements and a bobblehead of himself made by one of his staffers following completion of "The Princess and the Frog."

The headquarters for Disney Animation is located in Burbank, Calif. It's also where Ron Clements works. The hat used to be Roy Disney's office. Now, it's a conference room.

"The Little Mermaid" is slated for rerelease in theaters and on DVD.