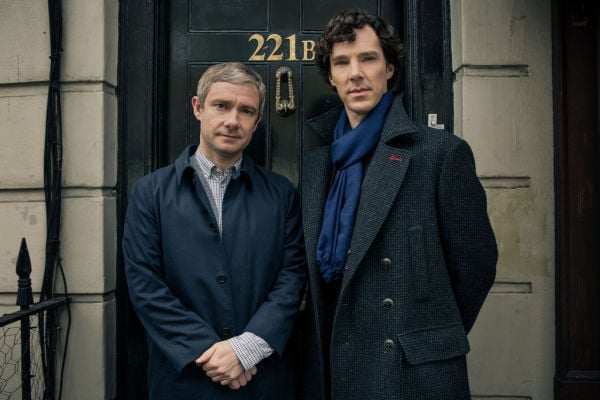 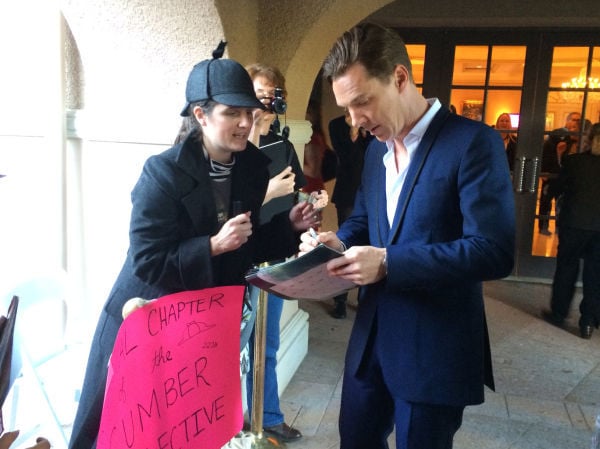 Benedict Cumberbatch signs an autograph for a member of the "CumberCollective," his fan club. "Sherlock" enthusiasts waited outside a Pasadena, Calif., hotel for more than 10 hours just to see him. 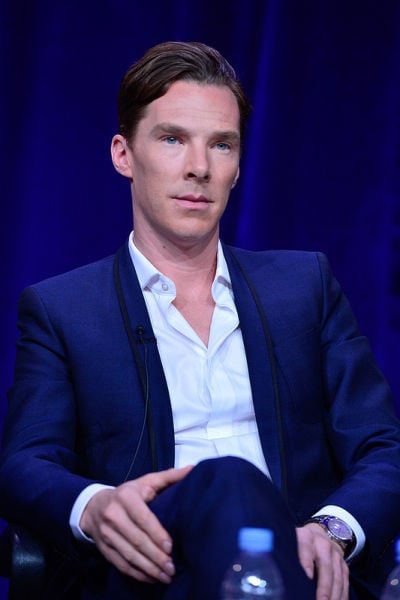 Benedict Cumberbatch stars in a third season of "Sherlock," even though he has an active film career. 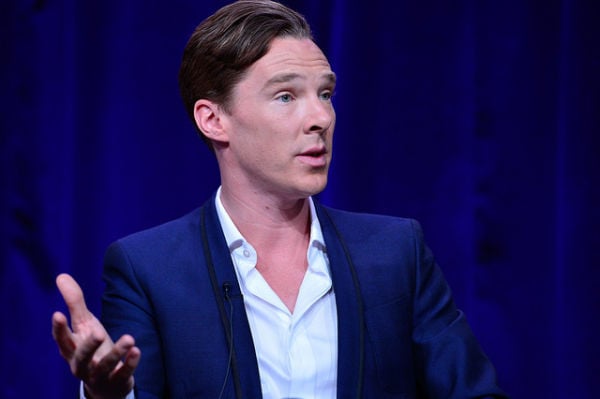 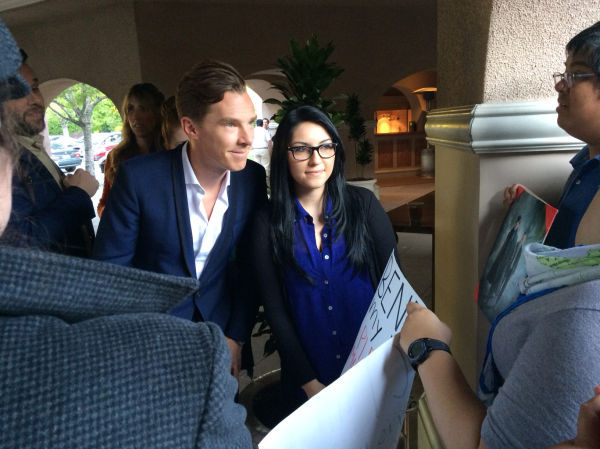 What would get you to wait outside a hotel for 12 hours? A photo with your favorite actor. In this case, that's Benedict Cumberbatch.

“We’ve been here before dawn,” one says. She’s dressed like an old-school Sherlock Holmes, waiting to see who else? Sherlock himself.

Fans of the British series “Sherlock,” the faithful call themselves the CumberCollective in honor of star Benedict Cumberbatch and nothing – nothing – is going to get in their way of seeing him.

“He’s wearing a blue suit,” another woman says. “We saw him when he came in and he said he’d come back and say hello.”

The time? Nearly 3 p.m. That means some have been here nearly 10 hours.

Once called the “Cumberbitches” – a name Cumberbatch is said to have hated – they’re now going by the more palatable term.

Inside the hotel, Cumberbatch is conducting interviews. When he’s asked about the faithful he admits he feels guilty that he couldn’t spend time with them when he came in. “It’s extraordinary,” he says (and, yes, he is wearing a blue suit). “I think a lot of it comes with who he (Sherlock) is, obviously. He’s a very iconic figure.

“It’s also a little bit unnerving. I feel an onerous sense of responsibility, but I do feel that it has to be acknowledged. I’ve got to acknowledge with gratitude the fact that they are so supportive.”

Those fans, though, aren’t just smitten with Sherlock. They can tick off his list of credits and tell you what he might be doing in the future. (“Star Wars, Part VII,” anyone? Cumberbatch dodges the question when he’s asked if that’s true.)

They say they like him because he’s an “intelligent” actor who’s always nice to his fans. And when they’re told he got to meet with Robert Downey Jr. – another Holmes portrayer – the night before, they just shake their heads knowingly.

Cumberbatch says the fan attention is particularly pleasing when he sees the makeup of his “collective.” It isn’t just teenagers. Whole families watch “Sherlock.” “I get a kick from that,” he says. “One of the biggest thrills I had when the first season launched was to look at all the book sales shoot up. That makes me very, very happy.”

Because of “Sherlock’s” immediate success, the 37-year-old Cumberbatch got offers to a lot of films. One by one, he ticked them off, starring in everything from “War Horse” to “Star Trek Into Darkness" to, most recently, “August: Osage County.”

His future slate is just as packed. And it doesn’t look like it’s going to free up anytime soon.

“I’m really keen to create something for myself,” he says. “I set up a production company so I can do something from inception to completion. Clooney does it. Pitt does it. I’m not putting myself in the same bracket as them but they show it’s possible. They’re very inspiring on that front.”

Currently, he’s looking at the Patrick Melrose novels. “David Nicholls is doing an adaption of those books and he’s a good friend.”

Providing the voice of the dragon in “The Hobbit: The Desolation of Smaug,” Cumberbatch got a chance to try another form of acting – one that relied heavily on his rich voice.

In “August: Osage County,” he had to ditch his British accent for a Southern drawl. “I was in Oklahoma for five weeks, so I had a lot of time to assimilate. I’d go into town and they’d say, ‘Do the accent.’ I would and they’d say, ‘You ain’t got it yet,’ so I kept coming back and kept trying. They were really sweet about it."

Inevitably, those Oklahomans would make the “Sherlock” connection – a surprise considering most seasons consist of only  three episodes.

Cumberbatch, however, loves the character and the twists writer Steven Moffat has given him. Sherlock Holmes’ aloof manner puzzles some, considering many women see him as a sex symbol.

“There are a lot of reasons why that might be the case but I don’t know,” Cumberbatch says. “He has a sexuality, there’s no doubt about it. It’s just he subsumes it do his work.”

They’re probably the actor’s best critics. Mom, in fact, isn’t afraid to rein him in. “I love them to bits but I can be quite short. And mom does say every now and again…’Hmmm. Careful darling. Just be careful.' It’s probably the best gauge.”

Although acting has been the family business, Cumberbatch says his parents "worked really, really hard to afford me an education to be anything but an actor. I tried very hard for a while to be a criminal barrister, then realized you had to work as hard as anyone.” When he talked with lawyers, they all told him, “Go back to acting.”

And so he did, carving one of those careers others can only envy.

When he finishes a round of interviews, it’s well after 4 p.m., but he makes it out to those fans, poses for photographs and signs every one of their pieces of memorabilia.

“See what we mean?” one woman says as he makes he way through the ranks. “He really is that nice.”

Away from the crowd, Cumberbatch says, he still takes public transportation, still rides a motorcycle and still remains relatively anonymous.

“When I go shopping, I don’t sort of send minions out and sit at home at the top of a tall ivory tower with guns pointed at the street,” he says with a laugh.

“It is odd. If you’re having a down day, that’s when it gets a bit particular. When you have a camera thrust in your face or somebody wants to sort of have a chat…but people, by and large, both here and in the U.K. have been really respectful of that.”

Besides, Harrison Ford told him he was a Cumberbatch fan and it really threw him. “I know what it’s like. I am a fan of Harrison Ford. When he said that to me, it was back-to-front. I still get completely starstruck. I mean, really starstruck.”

It all started with a truck, says 22-year-old Levi Shetler.

LOS ANGELES | When Diana Rigg was asked if she wanted her daughter to go into acting, she would defiantly say, “Nooooooo.”

"August: Osage County" was one of the most compelling stage dramas of the last decade.

In the latest "Star Trek" installment, it's all about the chair.

All Dolly Levis are not created equal.

REVIEW: 'The Current War' doesn't light up the screen

Routinely, a lot of the chatter wears thin, which prompts director Alfonso Gomez-Rejon to turn to maps that manage to namecheck just about every city the film is in.

Benedict Cumberbatch signs an autograph for a member of the "CumberCollective," his fan club. "Sherlock" enthusiasts waited outside a Pasadena, Calif., hotel for more than 10 hours just to see him.

Benedict Cumberbatch stars in a third season of "Sherlock," even though he has an active film career.

What would get you to wait outside a hotel for 12 hours? A photo with your favorite actor. In this case, that's Benedict Cumberbatch.