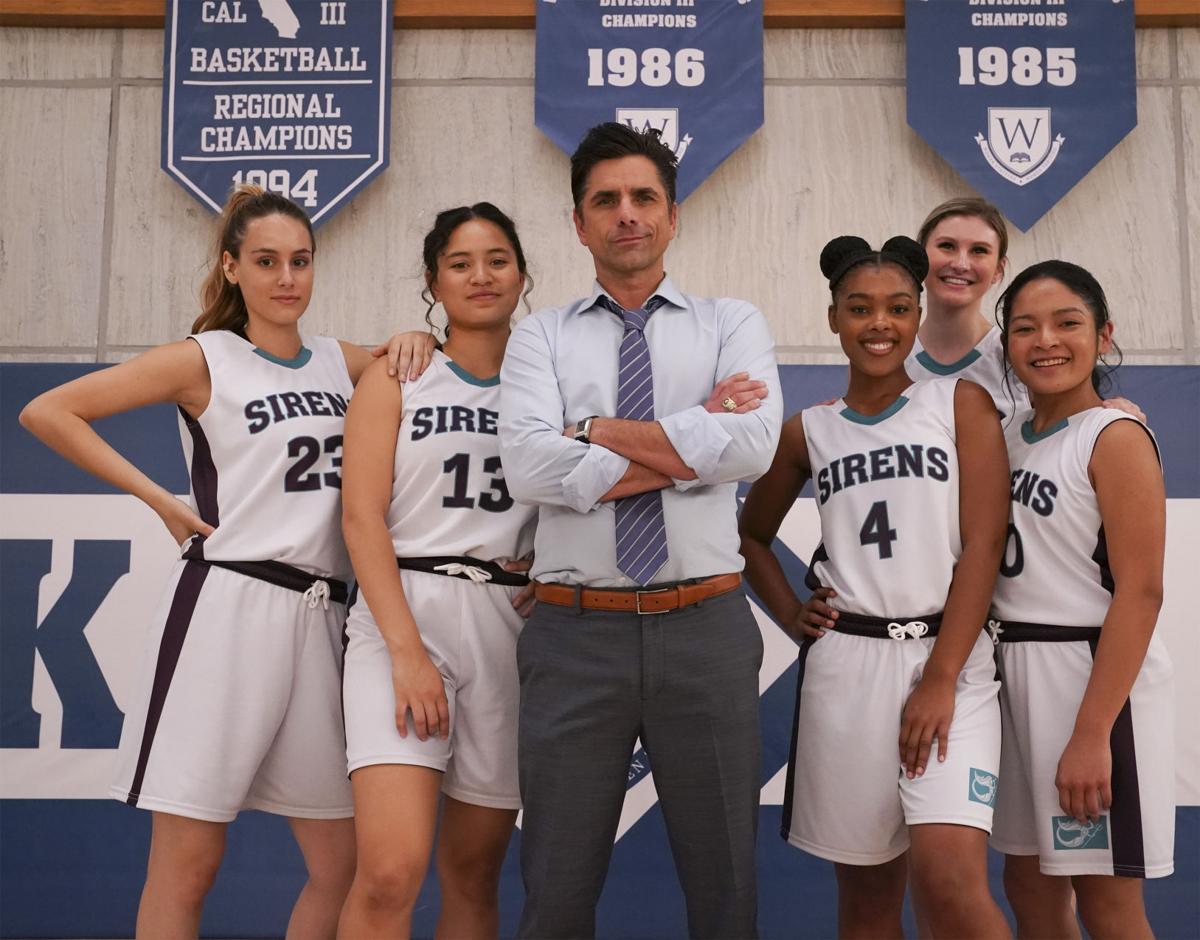 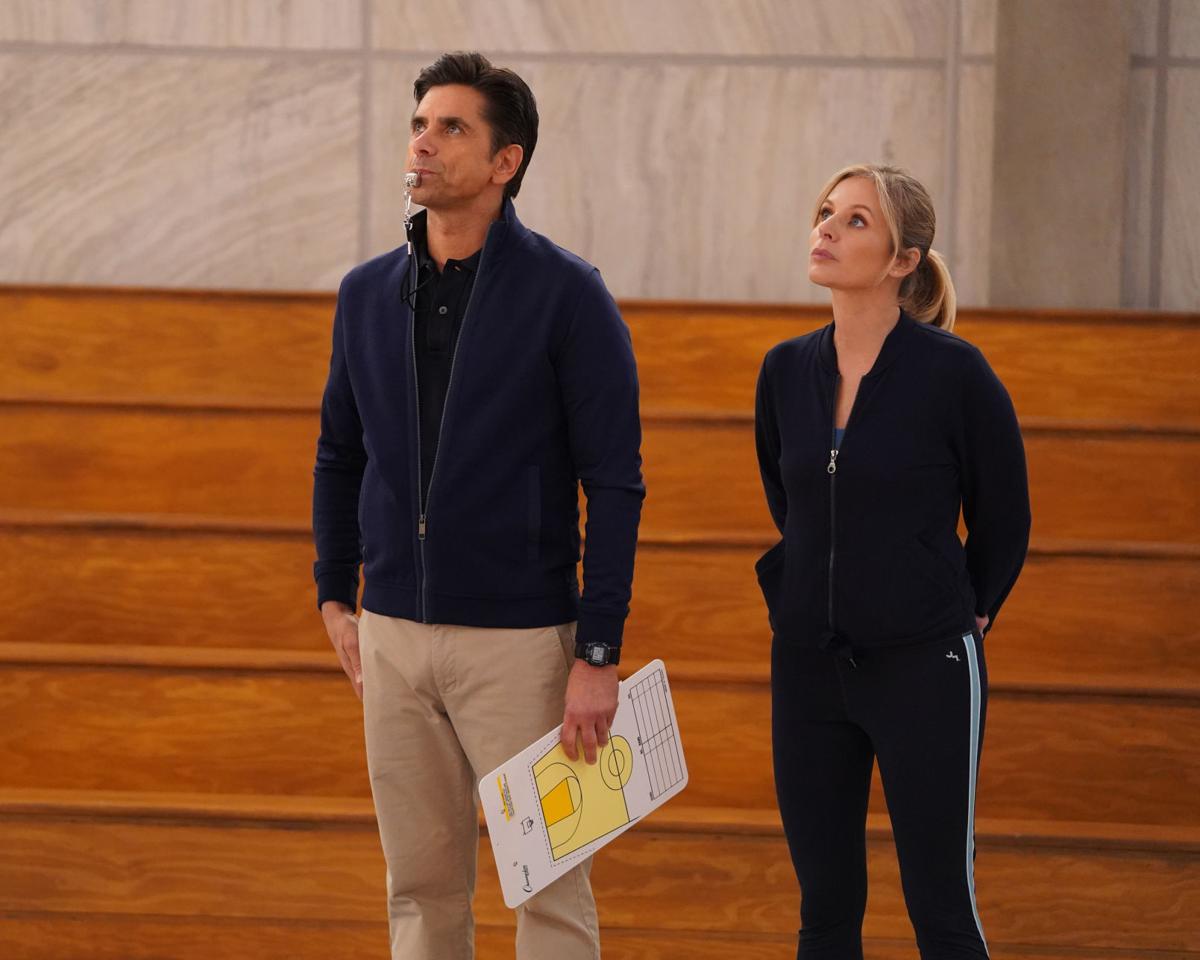 John Stamos sizes up the job he has a high school basketball coach with his assistant, played by Jessalyn Gilsig. 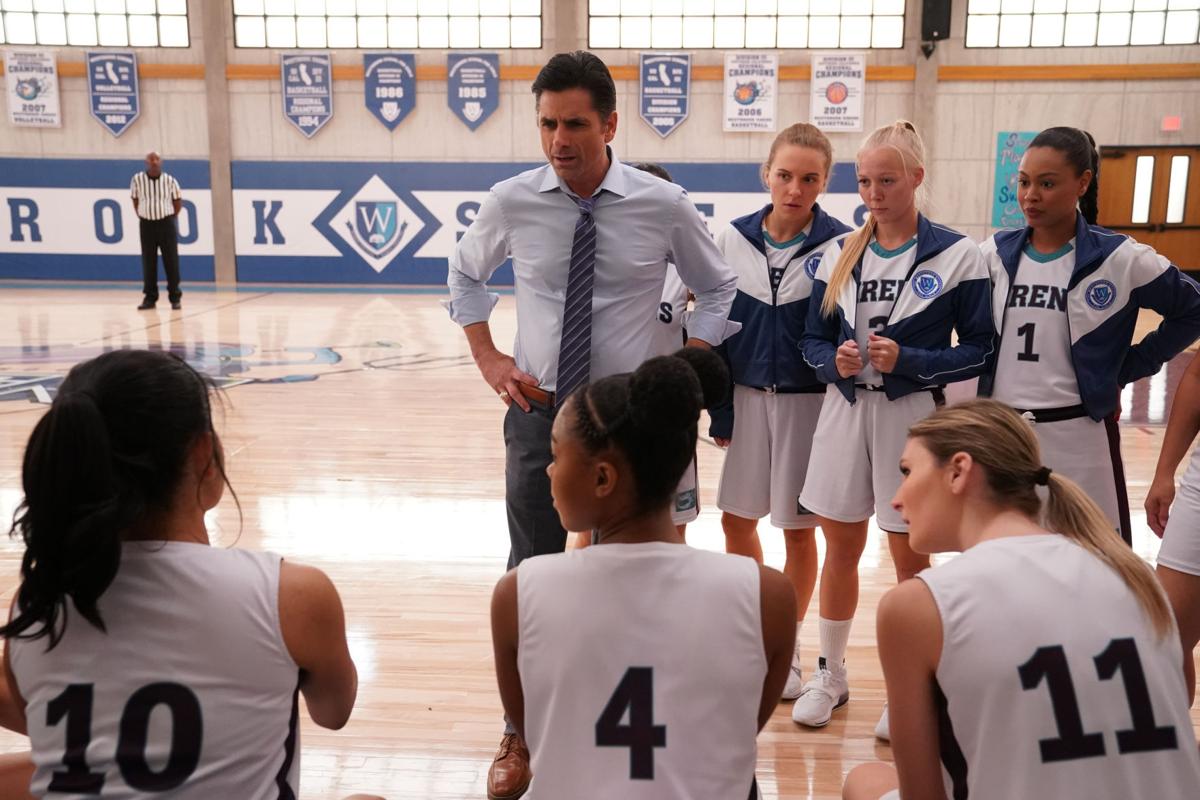 John Stamos was thrilled when he heard he could possibly star in a new series from producer David E. Kelley.

“Do I play a lawyer?” he remembers asking his manager. Since “The Practice,” “L.A. Law” and “Ally McBeal” were among Kelley’s credits, it seemed a good assumption.

No, the manager said, it’s a basketball show.

“And my heart sunk,” Stamos says, “because I’m so bad at sports.”

Called “Big Shot,” it features Stamos as a college basketball coach who’s bounced after throwing a chair at a ref. Instead of moving to another college job, he gets hired as coach at a private girls school. Like Stamos, he’s forced to step out of his comfort zone and learn something about himself.

To prep, Stamos went to a practice (or, as Stamos calls it, a “rehearsal”) with basketball exec Jerry West. “I really took that as a challenge because it was just such a character that I’ve never played,” he says during a Zoom conference. “It was the first character that I’ve been offered that everybody (says) is unlikable. So I dug into that because I felt I could probably go a little further than other actors.”

At the school, players challenge him at every turn. Because they come from privilege, they’ve been able to call many of their own shots.

Stamos’ character, Marvyn Korn, “gives as good as he gets,” says Yvette Nicole Brown, who plays the school’s dean. “It’s not like we’re just all on him and he’s sitting there sweet and kind. He gives us a reason to be a little disgruntled every now and again. He’s a mess sometimes.”

Because Stamos hasn’t done a role like this before, it’s an opportunity to see something new, Executive Producer Dean Lorey says. “He’s terrific in the show.”

Stamos, meanwhile, tosses the compliments back to his younger co-stars. They went through a basketball boot camp and, like the star, didn’t know much about the game.

“There were different levels,” says Executive Produce Bill D’Elia. “Some of them could play a little bit. Some of them were quite not good.” The basketball coordinator rehearsed the plays so they would look slick on screen.

“They’re fantastic,” Stamos says. “I’ve always said that this show won’t work unless those girls work. And each episode they really find their characters…and they get better at basketball, too.”

Stamos, meanwhile, has been honing his coaching skills. “I was looking for a way to play an adult character that had layers and wasn’t just light and fluffy,” he says. “He listens and he grows through the first season. It’s one of my favorite jobs I’ve ever had.”

There are enough cute one-liners in “The Mighty Ducks: Game Changers” to make you want to suit up once again.

When fans have a chance to talk with Emilio Estevez, they don’t hesitate to tell him they’d like to see him return in “The Mighty Ducks” or “Y…

What's the game plan for Marvel's 'Falcon and the Winter Soldier'?

If you haven’t dipped into the Marvel universe, don’t worry.

John Stamos sizes up the job he has a high school basketball coach with his assistant, played by Jessalyn Gilsig.