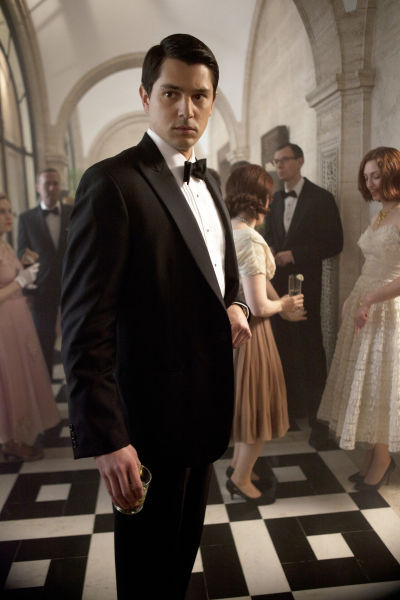 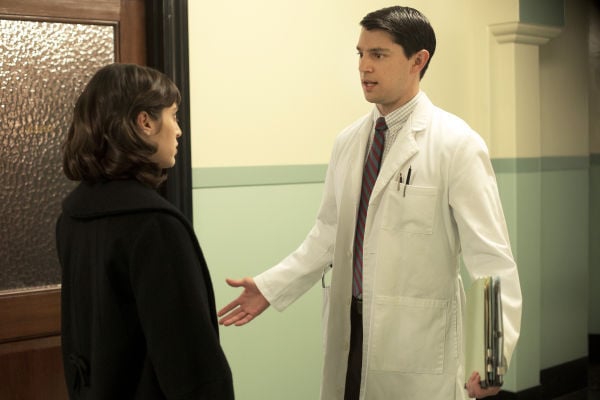 Lizzy Caplan as Virginia Johnson and Nicholas D'Agosto as Dr. Ethan Haas begin a relationship but quickly discover work can get in the way in "Masters of Sex."

LOS ANGELES | Before "Masters of Sex" premieres Sunday night, Nicholas D'Agosto made sure to prep his parents, who live in Omaha.

"They've seen my butt on screen before but I think they have their own trepidation about the series," he says. "This is a very provocative show. I wanted them to be prepared. I hope some of their friends are, too."

Cast as one of the doctors working with William Masters on his ground-breaking sexuality studies, D'Agosto has several scenes that required nudity.

"That was the least intimidating for me," the 33-year-old actor says. "The stuff that was more difficult and engaging is the stuff that the writers wrote, which is really deep. The sex stuff is more impulsive. This is the most difficult and wide-ranging part that I've ever played."

Considering he has been an actor most of his life, that's quite a claim.

D'Agosto started in the film business while he was still a student at Creighton Preparatory School in Omaha. Fellow Nebraskan Alexander Payne was shooting "Election" and needed teenagers to play high school students.

"He sent sides to all the different high school theater groups. He just wanted people who were doing theater in their schools. I went in and got a part. Within three weeks I was reading a scene with Matthew Broderick."

By the time the film was released, D'Agosto was a freshman in college.

"Between the summer of my freshman and sophomore years, I came out to Los Angeles," just to see if he could capitalize on his credit. He got work in "Psycho Beach Party," but decided he needed to finish his degrees at Marquette University.

Dad, an Arby's franchisee, was fine with him majoring in theater, but didn't want him to get something useless as a backup. "Get advertising...you can always come back home," he said. (Nick didn't listen -- his degrees are in theater and history.)

"What I had in my pocket was a professional credit. I had worked -- and actually made money at acting. But dad was concerned as a parent. He was born and raised in Omaha and stayed there." Mom, who was born in Sioux City, also had trepidations. "But they were always really, really supportive."

Following graduation, D'Agosto was determined to call Los Angeles home. "The first months I was out here, I was cast as the lead in a big pilot with Molly Shannon."

The show was "Cracking Up," a comedy about a crazy Beverly Hills family.

"I was replaced off the pilot by Jason Schwartzman and it was a really serious education about what the business could be."

Family and "a great manager" helped D'Agosto make sense of the situation.

"Being a naive Midwestern kid, it was hard to imagine people just being mean to each other. I was very sheltered."

Work in other series followed; then he landed a leading role in "Final Destination 5."

Now, he's part of "Masters of Sex," a series that could push him to the next level.

"I'd be more than happy doing this for many, many years," he says. "I'm not looking any further than this show."

"Masters of Sex," he adds, is another lesson in the ways of Hollywood. "A show like this requires deep study. You can only bring your emotional experience to it by educating yourself."

That, in essence, is D'Agosto's advice to other aspiring Midwestern actors.

"First, I encourage them to get a college education," he says. And then, I tell them, 'Go for it. You can't ever live with regrets.'"

REVIEW: 'Masters of Sex' fudges facts but brings the drama

The third season premiere of “Masters of Sex” does plenty to explain the behavior of sex researchers William Masters and Virginia Johnson. But…

Lizzy Caplan as Virginia Johnson and Nicholas D'Agosto as Dr. Ethan Haas begin a relationship but quickly discover work can get in the way in "Masters of Sex."