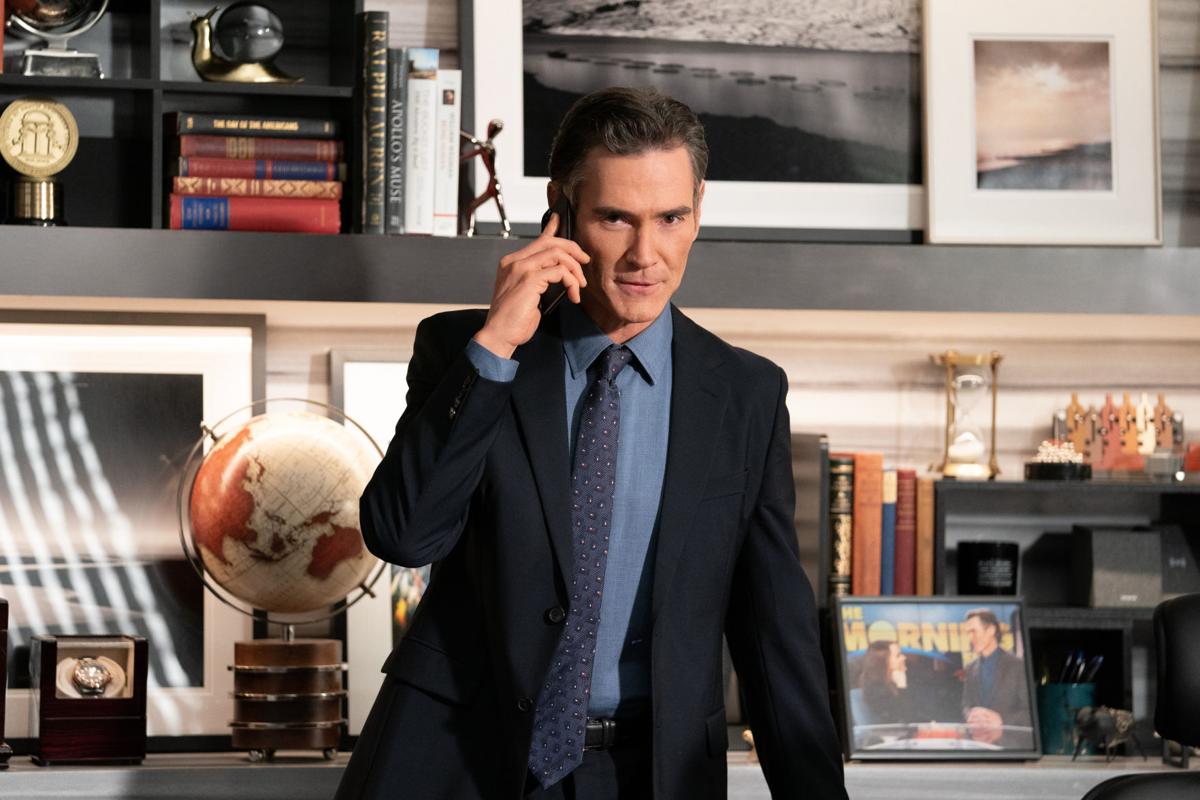 Billy Crudup plays the calculating head of the network on "The Morning Show." 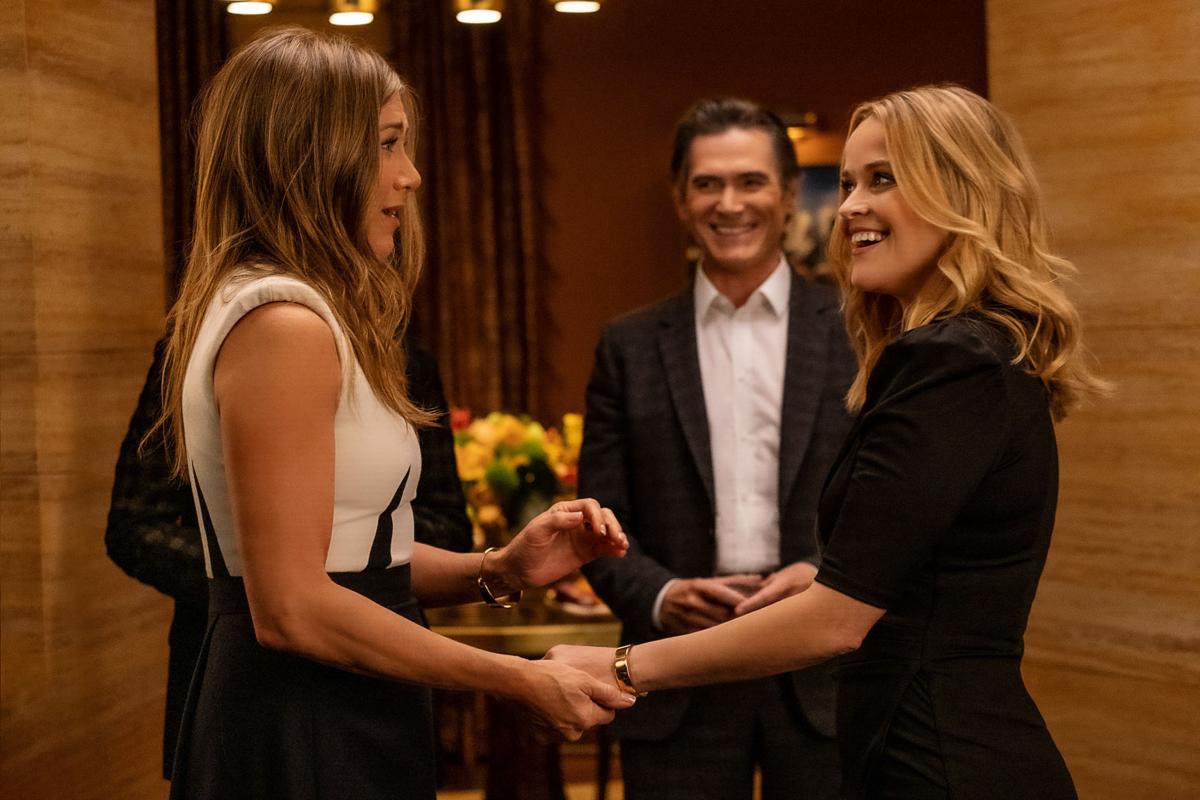 Jennifer Aniston, left, greets Reese Witherspoon much to the delight of Billy Crudup on "The Morning Show." 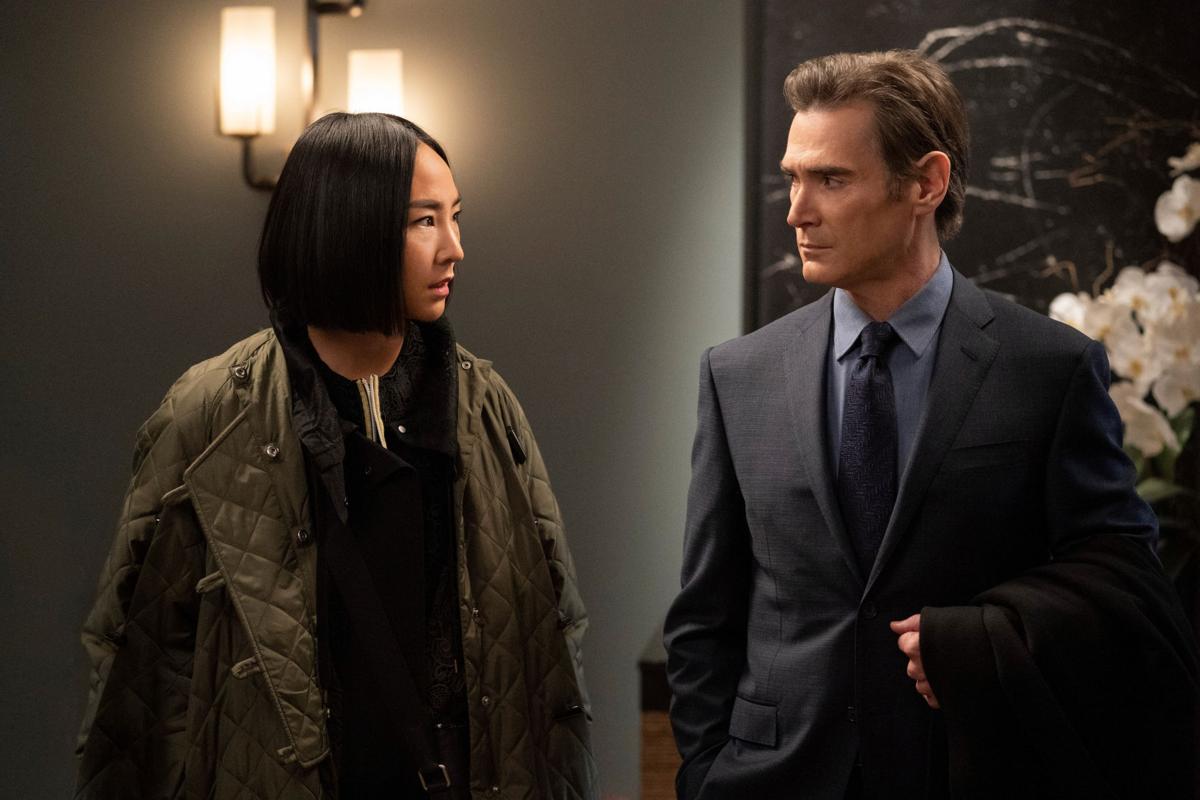 Greta Lee tries to tell Billy Crudup what to do with the news division on "The Morning Show."

Jennifer Aniston and Reese Witherspoon may get star billing on “The Morning Show” but it’s Billy Crudup who steals the show.

As head of the UBA network, he’s constantly juggling contracts, personalities and lies just to make sure he’s ahead of the game. In the second season, he makes a pinball analogy and it’s apt. He’s the pinball wizard, keeping all the balls in play.

Starting just before the coronavirus pandemic and the 2020 election, the series' second season is trying to weather the storm caused by former morning anchor Mitch Kessler (Steve Carell). Exiled, “canceled,” you name it, Kessler is hiding out in Italy, trying to justify his actions in light of a #MeToo sea change.

Good friend and co-anchor Alex Levy (Aniston) is out of commission, too, writing a book that could explain why others have declared her a feminist hero for calling out the network suits.

Crudup’s Cory Ellison, meanwhile, is trying to get some traction back in his network. Without Alex on “The Morning Show,” co-anchor Bradley Jackson (Witherspoon) is just doing OK. She doesn’t have the same star power – or the audience. When her co-anchor is promoted to the nightly news, she’s left to fume and wonder what her fate could be.

While the first two episodes of season two are too enamored with getting players in place (particularly since season one ended with a house cleaning), “The Morning Show” does pick up steam and gets everything from the Iowa Caucuses to a visit to Wuhan in the picture.

To jumpstart the money-making morning show, Cory proposes a big swing and manages to land it with considerable aplomb. Others, however, are less enamored with the idea. And, then, there’s the matter of a book written by Maggie Brener (Marcia Gay Harden) that threatens to salt plenty of old wounds.

Even though she’s writing her own take on the situation, Alex is freaked about what Maggie might say. To soften the blow, the network proposes a sit-down interview. Asking the questions: An old rival, Laura Peterson (Julianna Margulies), who may have her own scores to settle.

While Aniston and Witherspoon drift in and out of episodes, Crudup never loses the show’s focus. He’s constantly flipping balls – including a new UBA+ network that could cause everything to tilt.

Crudup is so good at waffling between sincere and smarmy, it’s never clear what Cory wants other than to save Cory.

Now aided by a young, stoic Asian-American news president (a brilliant Greta Lee), he’s occasionally out-of-control in a good way. More stable? “The Morning Show’s” producer, Mia Jordan (Karen Pittman). She rose above the crap Mitch caused and now just wants to do morning television. Unfortunately, she’s given so many traumas, they cloud her ability to see the newsworthiness of something like COVID-19.

While Mitch doesn’t appear right away, he does have a presence and it tends to throw others off, too. Alex, most of all, is rattled by just about everything.

Luckily, she has the support of her old producer, Chip (Mark Duplass), who is able to pivot when no one else can.

Helping this along: cameo performances that are golden. Holland Taylor is Emmy-worthy as the UBA board member who has no time for woke-ness. She gets Cory to buckle and she isn’t afraid to give his new news president a lesson in female strength. She has a handful of scenes, but Taylor is the best news this installment delivers.

Pittman is a source of strength, as well, taking charge in the worst possible times.

And, then, Duplass’s Chip is about as loyal as an employee can get. He stands by Alex (even when he shouldn’t) and finds ways to make her look stronger than ever.

More than other streaming series, “The Morning Show” practically demands bingeing. If you watch one episode, then wait a week, you lose the momentum that it fosters. Seen as a whole, the 10 episodes point to greater lessons about television, its power and its impact.

Crudup, though, is the heart of this world. As corrupt as he may be, he’s worth following. Keep him on the radar and you’ll never lose sight of what this wants to be. Even when Alex has a “Network”-level breakdown, he’s there to make sure the viewers see every blessed minute.

“The Morning Show” is now airing on AppleTV+.

'The Morning Show' has plenty to say and teach, Mark Duplass says

The story many may be missing with the launch of “The Morning Show” is the rise of female voices in the entertainment business, the veteran actor/director said. "To be part of something with this large of a reach? That’s really cool,” he said.

In the boxing ring, Muhammad Ali may have been a driven competitor, determined to win no matter what. At home, however, he was “sweet and cudd…

'Queens' brings Eve, Brandy and others back into the music fold

Could a hip-hop group from the ‘90s make a comeback in 2021 and succeed? Absolutely, say the stars of “Queens,” a new ABC drama about just suc…

Billy Crudup plays the calculating head of the network on "The Morning Show."

Jennifer Aniston, left, greets Reese Witherspoon much to the delight of Billy Crudup on "The Morning Show."

Greta Lee tries to tell Billy Crudup what to do with the news division on "The Morning Show."