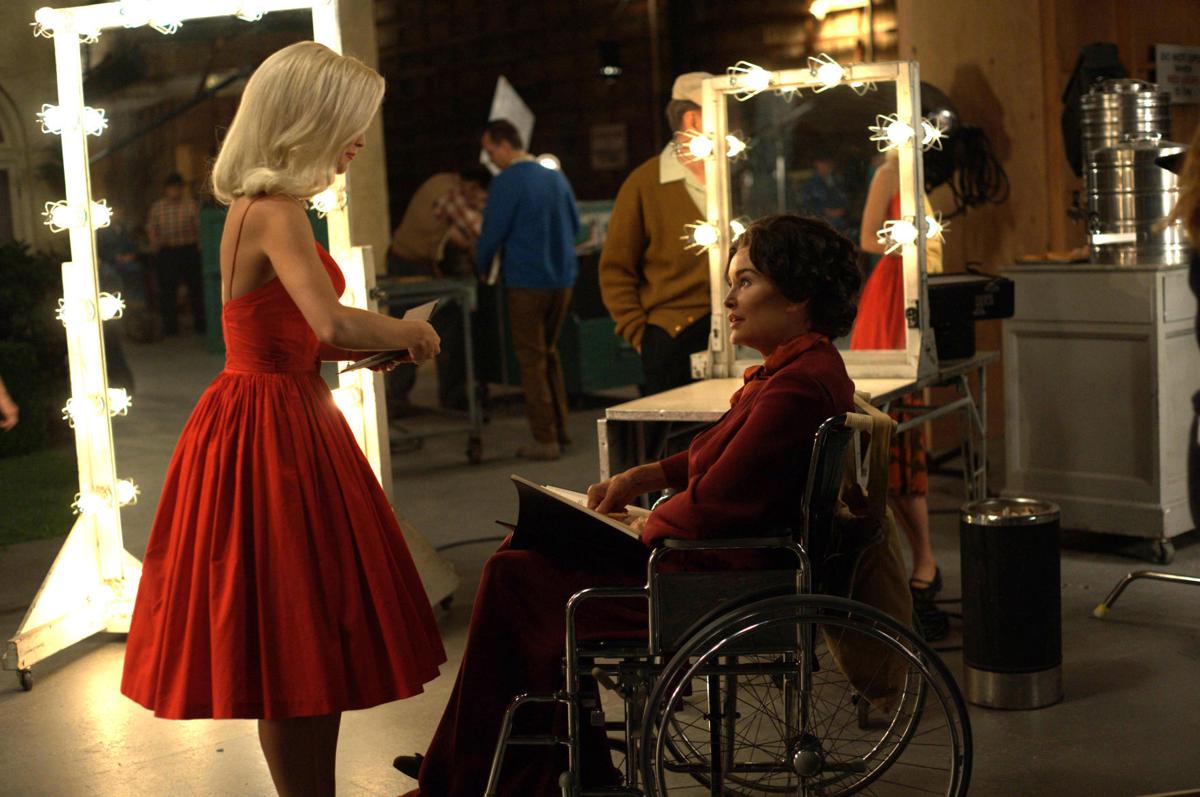 Jessica Lange, right, plays Joan Crawford in "Feud: Bette and Joan," a look at the making of "What Ever Happened to Baby Jane?" 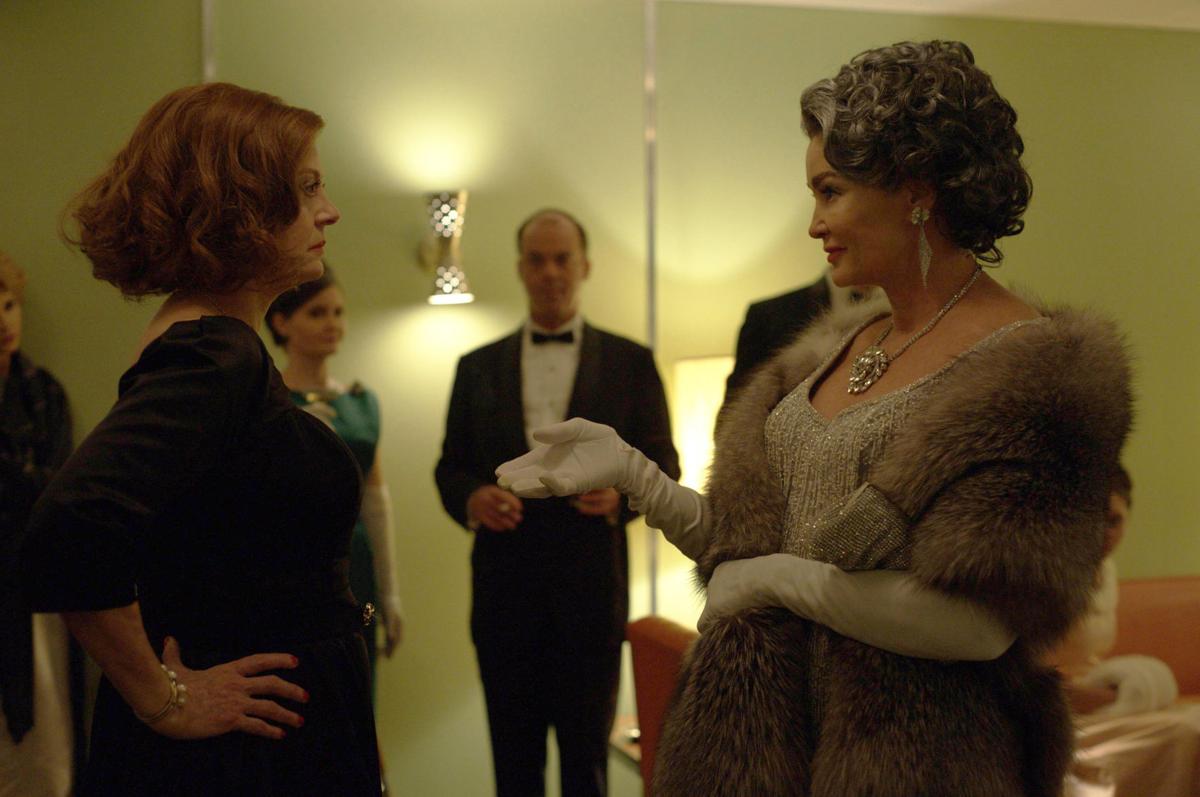 Subtlety? That wasn’t a hallmark of either Joan Crawford or Bette Davis.

But in “Feud: Bette and Joan,” Executive Producer Ryan Murphy and his team find the softer moments of both actresses, particularly behind the scenes when the two filmed the horror film “What Ever Happened to Baby Jane?” It's a remarkable feat, considering the circumstances.

Notoriously competitive, the two saw each other as the stumbling block – and ladder – to success in later life. Crawford (played with restraint by Jessica Lange) pitches Davis (an Emmy-worthy Susan Sarandon) the story of two ghoulish sisters. The result, she suggests, could be a chance for both to return to the stardom that age wants to prevent.

Bette bites and the two become linked in a bitter battle of one-upsmanship. Davis thinks Crawford is getting more attention from director Robert Aldrich (Alfred Molina) and she tries to sweet-talk him at her home. Crawford doesn’t like the publicity Davis leaks and she spills all to gossip columnist Hedda Hopper (Judy Davis). It’s a classic case of rivalry. But, like the message in “Baby Jane” (“All this time we could have been friends,” one says to the dying other), it never quite gets through to either.

Murphy gives his eight-part series a lush old Hollywood look and lets both Lange and Sarandon have fun recreating the quirks that made the actresses so memorable. While Sarandon is a dead ringer for Davis, Lange has to work harder to find the outsized Crawford. Both are ably abetted by a host of actors as recognizable names.

Stanley Tucci swears up a storm as studio head Jack Warner; Jackie Hoffman is a hoot as Crawford’s assistant Mamacita and Dominic Burgess is cuttingly good as co-star Victor Buono.

Most do what they can to keep the two apart but when they’re together the sparks fly. Davis isn’t afraid to call out Crawford’s flaws (repeatedly calling her “Lucille,” her real name); Crawford doesn’t hesitate to make Davis steam.

In perhaps the best installment of all, the two are at the Academy Awards. Davis has been nominated and sees a win as her last chance to regain power. Crawford, however, can’t cede the spotlight, so she asks the other nominees if she can accept in their absence. Sure enough, she gets what she wants and Davis does what could only be classified as a slow burn.

Catherine Zeta-Jones and Kathy Bates play a Greek chorus of sorts, commenting (as Olivia de Havilland and Joan Blondell) on their friends’ behavior.

There are other “names” that drift in and out and a look at the business that will surprise, but it’s the two actresses who command attention. Both are incredibly good; both make solid points about ageism in Hollywood and what it does to an actor’s psyche.

While Murphy doesn’t go the “Mommie Dearest” route with his remembrance (this is far too classy for that), he doesn’t hide the humor or refrain from letting Bette be Bette.

“Feud” stings while it entertains. But it also tells some great truths about the elusive world of stardom. Be careful what you wish for, we learn, because sometimes even when you get it, it may continue to perplex you.

Take one bite of the first installment and you’ll be hooked. Like popcorn, it makes everyday troubles slip away and, instantly, satisfies in ways you never thought possible.

King of collectibles: Elvis reigns there, too

Add collectibles to the list of things changed by the internet.

Dan Stevens preps for a 'Legion' of new fans

LOS ANGELES | Last year, Dan Stevens danced on stilts under pounds of makeup in the live-action version of “Beauty and the Beast.”

LOS ANGELES | When Susan Sarandon made a Facetime call to her granddaughter, she didn’t anticipate the reaction she got.

HBO, Netflix and NBC score in Emmy race thanks to strong series

There must have been plenty of cheering at NBC after the Emmy nominations came out.

Emmy has new contenders without ‘Game of Thrones’ in the mix

“Game of Thrones” won’t win any Emmys this year.

Angela Bassett, Peter Krause and Connie Britton get top billing in the new Fox series “9-1-1,” but it’s Oliver Stark as a reckless member of t…

"Hollywood" is a juicy look at the dream factory and the men and women who populate it. It’s sexy, sizzling and silly all at the same time.

Jessica Lange, right, plays Joan Crawford in "Feud: Bette and Joan," a look at the making of "What Ever Happened to Baby Jane?"