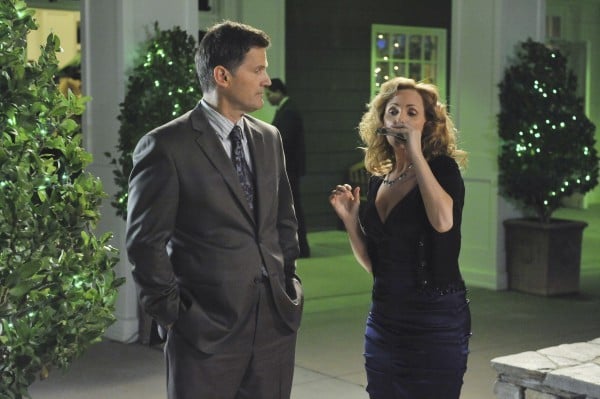 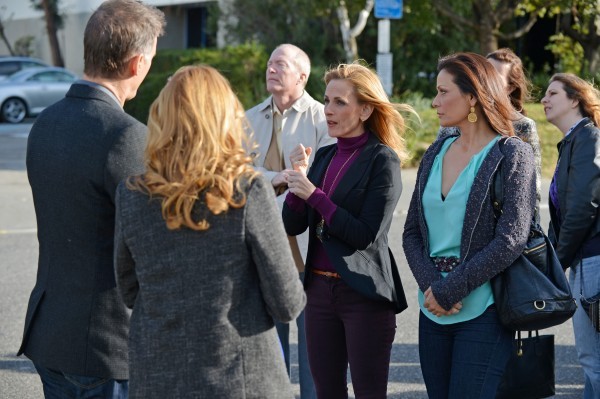 Marlee Matlin, center, tries to make the case for students at Carlton School for the Deaf when they protest the school's closing on "Switched at Birth." 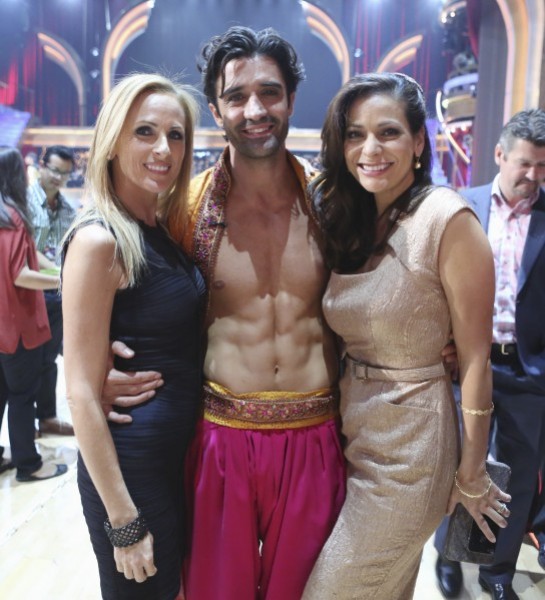 Marlee Matlin, left, and Constance Marie greet Gilles Marini when he competed on "Dancing with the Stars: All-Stars." The three star on "Switched at Birth" on ABC Family. 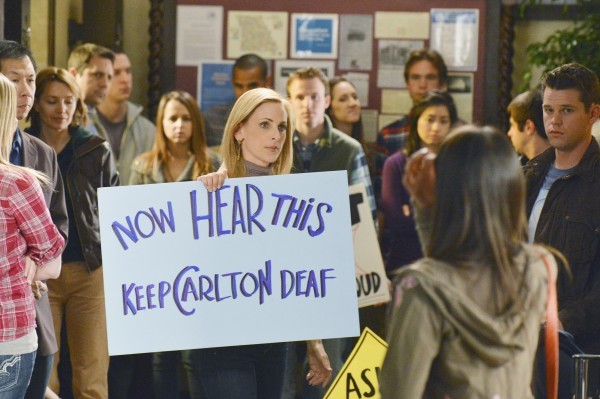 LOS ANGELES | Oscar winner Marlee Matlin says "Switched at Birth" is the first show that lets her be herself.

"I can communicate in my own language," the deaf actress says. "I don't have to depend on someone interpreting for me. Bill Hurt said what I said in 'Children of a Lesser God.' Someone else did it for me in 'The West Wing.'"

On the ABC Family series, though, "the subtitles are my voice. That's why I bow down to them...for letting us communicate the way we naturally communicate."

In last week's edition, the entire show was done in American Sign Language -- a first. Matlin, who plays a guidance counselor, took center stage as students at Carlton School for the Deaf mounted a protest over the school's closing. The episode was inspired by a protest at Gallaudet University in 1988.

A role model for many of the show's actors, Matlin says it's gratifying to be part of a series that addresses issues many deaf Americans face.

"I was fine with being the most well-known deaf person in the world, but it's not that way anymore," she says. "I don't necessarily want to be the only one."

"I used to be able to talk about people. I can't do that anymore," she says with a laugh. "I've said I'm sorry a million times.

"There's no communication barrier, no lag time, no trying to find out, 'How is it going to sound?' when someone interprets for me."

Although she's well-equipped to advise deaf actors, Matlin often holds back. "They've subtly asked me how they might do a scene. But they don't ask me how to act. They're very proud of what they do here on the set and I have no right to tell them how to act."

"I don't see myself as a role model," she says through an interpreter. "If I inspire them, then I get inspired back."

When Matlin won the Oscar for her screen debut in "Children of a Lesser God," critics wondered if she'd be able to sustain a career. Since then, she has starred in several series and films, been nominated for Emmys and Golden Globes and competed on "Dancing with the Stars," another first.

"Switched at Birth," though, is a real coup, she says. "In 25 years, I've never seen such a phenomenal reception to having deaf characters on a show. You get to see the culture, the language and I'm very proud to be a part of it."

While hearing directors have asked her to help communicate with some of the younger actors, she often holds back. "We're all different people who are approaching work from different angles," she says. "We just happen to be on the same show. You want to make sure they're receptive to the opinion you want to throw in."

Oddly enough, many don't understand the speed involved in television signing. In reality, it can be quite quick. On television, it has to be slowed because "subtitles can't keep up with the hands. You can't read as fast as you can sign."

Slowing down, Matlin adds, lets viewers appreciate the language's beauty. Interest in "Switched at Birth" has even prompted her to create an app, "Marlee Signs." "It's not only for adults. It's for kids and babies. They can communicate in sign before they can communicate with their voices."

Growing up, Matlin didn't have the advantage of closed-caption shows. "I watched 'Streets of San Francisco,' 'Mannix'...all the action cop shows. 'The Electric Company' had subtitles back then. PBS was good.

"But 'Three's Company' was the first show that had closed-captioning and I was glued to the set. I did tell John Ritter at one point, 'Thank you...your show made it happen.'

"Now, everything is closed-captioned so you guys at the bars or you guys at the gym can also understand what's going on." She pauses. "You're welcome," she says. And  then she smiles.

LOS ANGELES | Gilles Marini got a great career boost from "Dancing with the Stars" but two turns on the show are enough.

LOS ANGELES | After her first appearance on "The Apprentice," Omarosa Manigault was branded a reality show villain.

Marlee Matlin, center, tries to make the case for students at Carlton School for the Deaf when they protest the school's closing on "Switched at Birth."

Marlee Matlin, left, and Constance Marie greet Gilles Marini when he competed on "Dancing with the Stars: All-Stars." The three star on "Switched at Birth" on ABC Family.