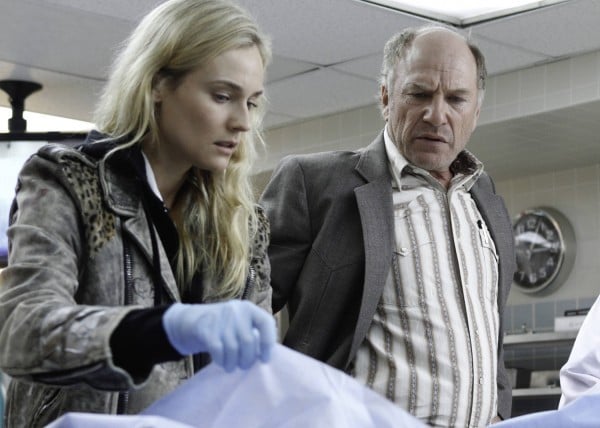 Diane Kruger confers with Ted Levine in the opening episode of "The Bridge." 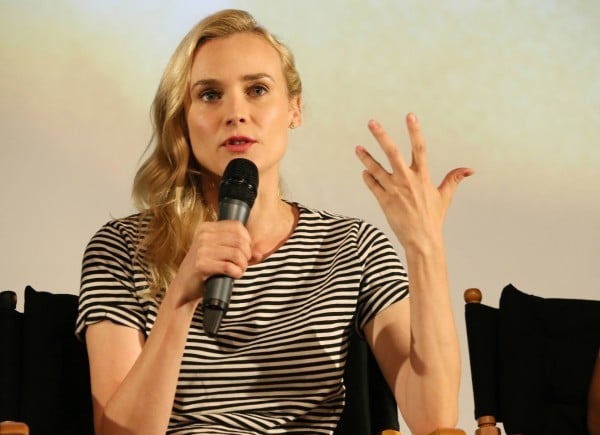 Diane Kruger talks about "The Bridge" at a screening. 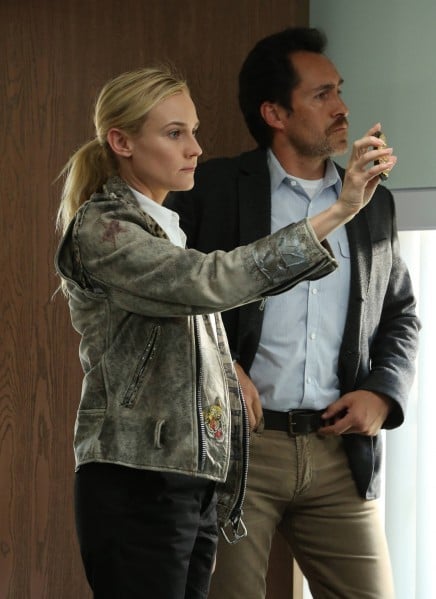 Diane Kruger and Demian Bichir co-star in "The Bridge."

Diane Kruger plays a cool, detached detective in "The Bridge." But she's not another Hitchcock blonde.

Sonya Cross, she explains, has Asperger's, which causes her to mask her emotions.

"We decided early on we were not going to label Sonya's condition in the show," she explains. "We didn't want it to be her defining character trait...which is pretty brave."

During the FX show's 13 episodes, viewers will get to see how the syndrome manifests. Asperger's, Kruger says, can lead to comedic moments. "The way that I got to pick up a guy in a bar is pretty priceless."

Still, the German-born actress says Cross is difficult to play because she shows emotion at the oddest times. "It goes against my instincts. Sonya's back story has been my saving grace. You learn where she puts all those bottled-up emotions."

To help her understand the disorder, a consultant was hired. "I've spent more time with him in the last four months than I've spent with my partner," she says. "I ask so many questions -- so many uncomfortable questions. But I sleep easier at night. He watches over everything I do."

Alex Plank, the consultant, also helps the writers understand the condition. "He would be the first to say he finds himself in funny situations," Kruger says.

In addition to explaining her syndrome, the series' 13 episodes will reveal what led to the investigation on the bridge and the way two countries handle crime.

Based on "Bron," a Scandinavian series about a murder on the border between Denmark and Sweden, "The Bridge" examines U.S. and Mexican relations, particularly in drug matters. Kruger's character -- a detective in El Paso -- must work with Demian Bichir's -- her counterpart in Juarez.

"It shines a light on a situation that most people in the U.S. and Mexico are aware of," Kruger says. "It's not partial to either side." The series does, however, discuss drug cartels and their growing influence.

In the Scandinavian version, Kruger's character didn't have a detailed background. With more episodes, "The Bridge" is able to explain why she does what she does.

"She has so many shortcomings in her personal life but she's so good at her job," Kruger says. "She has this ability to focus and look at things from a different point of view. That was really the thing that drew me to it....Sonya's character is so different and cool."

A star of "Inglourious Basterds," "Troy" and "National Treasure," Kruger says it's difficult to find a role as meaty in films these days. "A character like this has never been offered to me in the movies. I get 13 episodes to explore that person. It's an exciting time to come to cable television."

When she read the pilot, /Kruger says Sonya didn't click. "But I was intrigued enough to take a meeting with the writers to get a sense of who she was and what her story was going to be. In movies, you know the beginning, middle and end. You can tune your performance as to what will come next. I would not like not knowing. I need to define my character from the beginning so I can stick to that."

The writers gave her the necessary assurances and Kruger felt she could be part of a team, not just an actress for hire.

Like others in Europe, she was hooked on "Bron" when it aired. But she wondered how it could be adapted for an American audience. Then the U.S./Mexico angle emerged and it was clear "The Bridge" wasn't going to be a simple remake.

"We follow the skeleton of the original show faithfully. It has the same sort of intrigue and plot but we're setting it in El Paso and Juarez. It's warmer and brighter and sunnier. The storylines will evolve and there are major, major differences."

Delving into Asperger's, Kruger learned that one-on-one encounters are often uncomfortable. Frequently, those affected use calming mechanisms. "They may rub certain materials over and over or do heavy breathing. When she gets overwhelmed by a situation, you will see her come undone."

"The Bridge," she adds, is unique. 'It's a very character-driven cop show. You think it's about one thing and then it goes in directions that are quite unexpected."

Playing a teenager left for dead in the woods required more than a few acting exercises. For Anwen O’Driscoll, it involved working with an occ…

'Housebroken' brings out the animal in pet owners, stars say

If Clea DuVall had been able to take her cat to therapy, she may not have written “Housebroken,” a new animated series on Fox.

Diane Kruger confers with Ted Levine in the opening episode of "The Bridge."

Diane Kruger talks about "The Bridge" at a screening.

Diane Kruger and Demian Bichir co-star in "The Bridge."