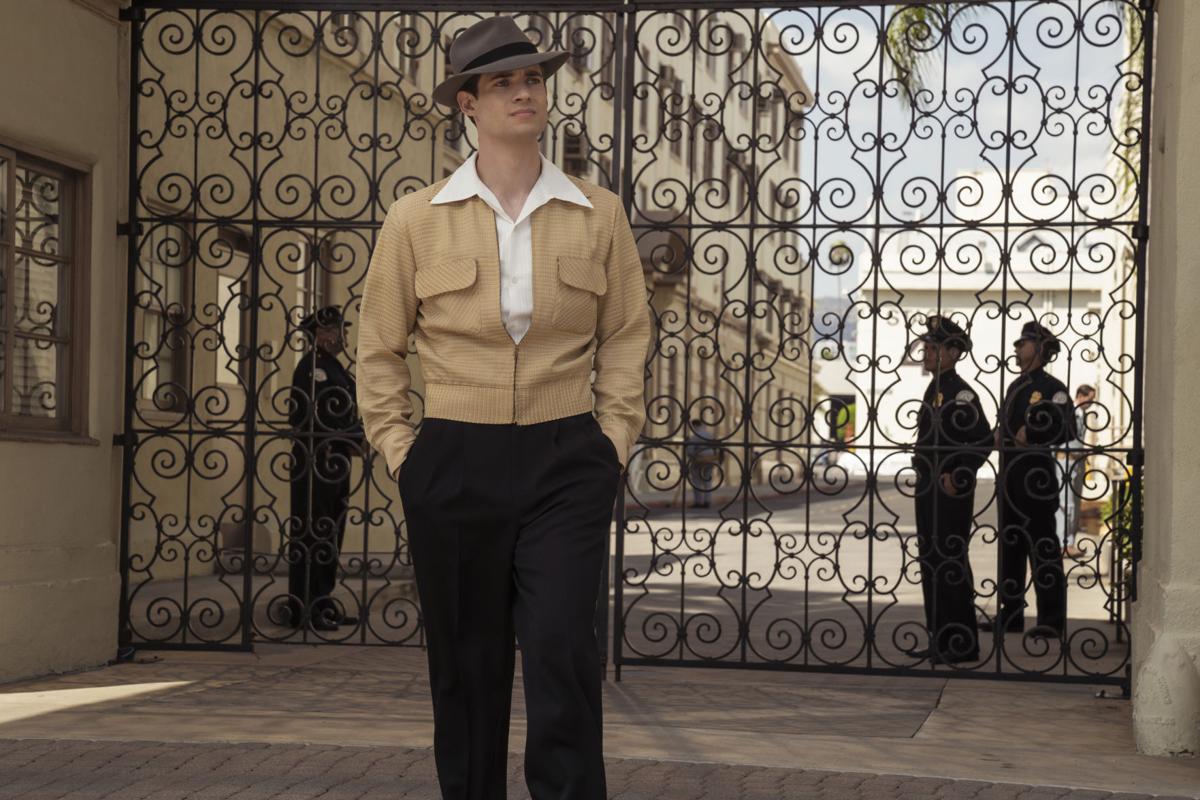 David Corenswet plays an aspiring actor hoping to get a role in "Hollywood."

Patti LuPone plays the wife of a Hollywood mogul in "Hollywood."

Laura Harrier plays an aspiring actress who gets cast in Darren Criss' film in "Hollywood." 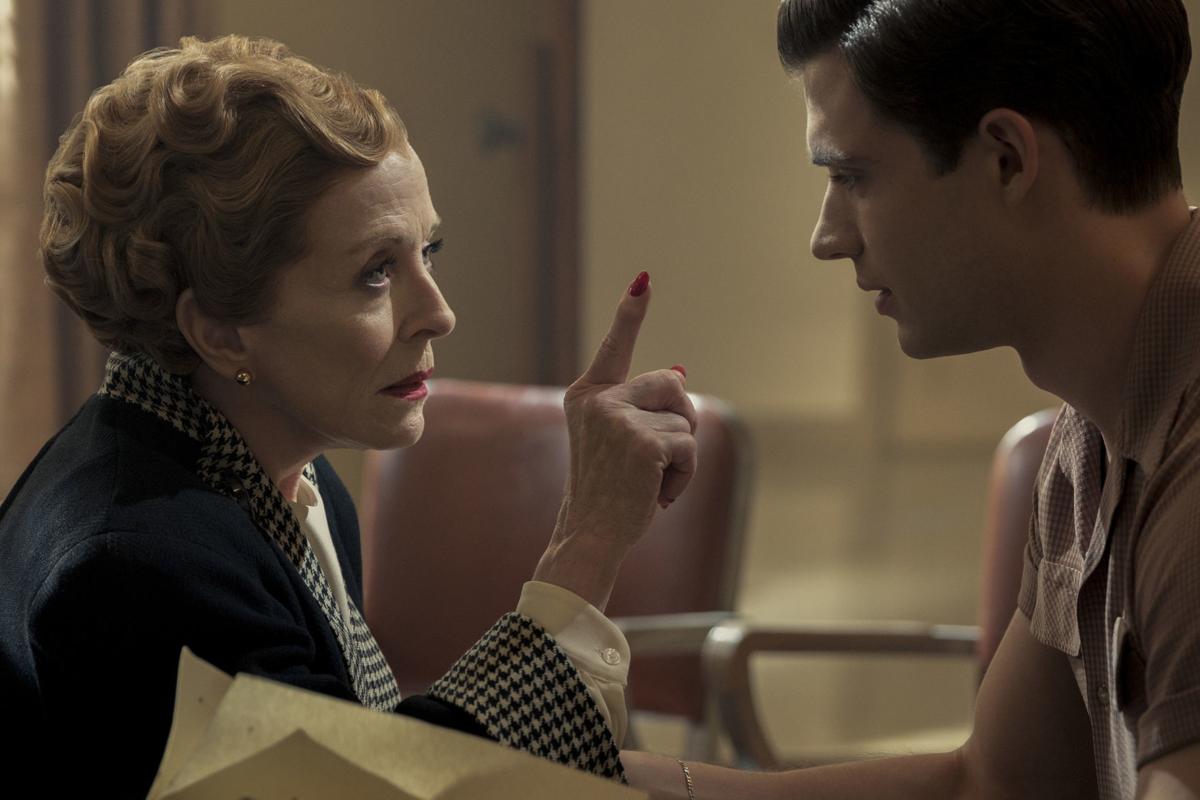 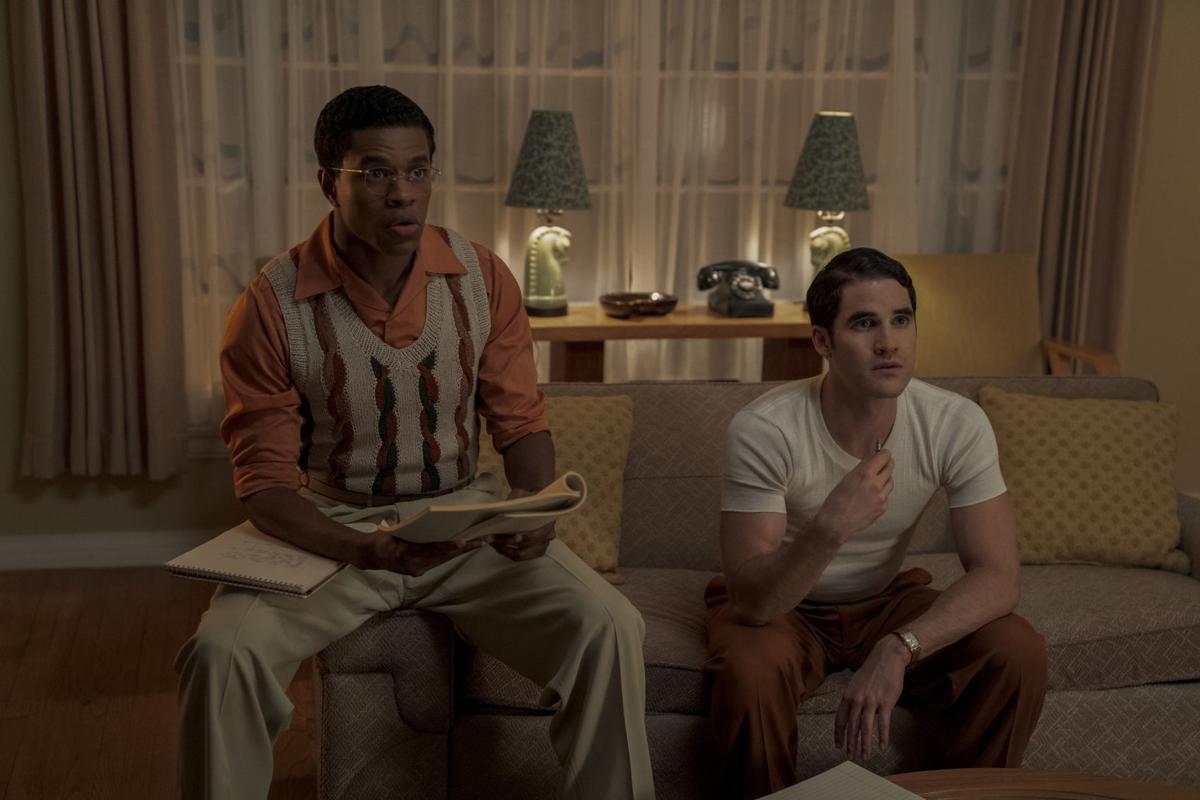 Jeremy Pope, left, and Darren Criss work on the script for a new film in "Hollywood." 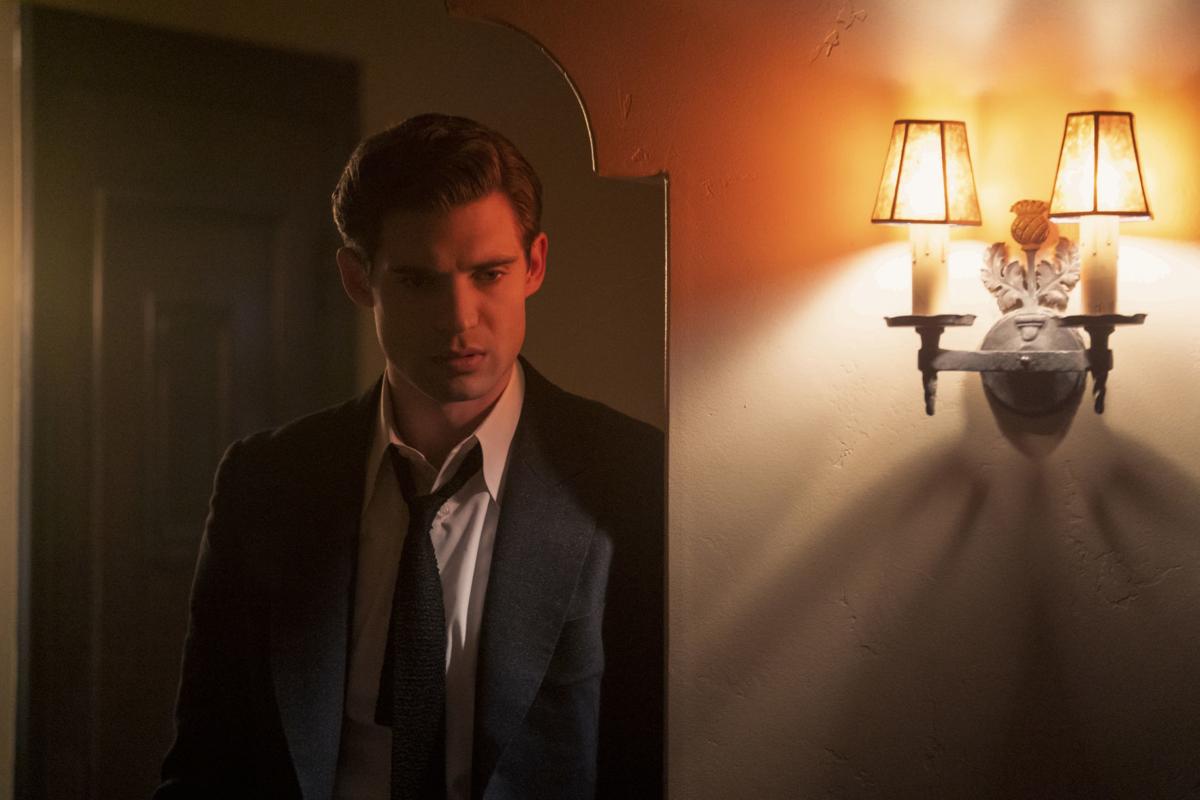 Viewers got a taste of Ryan Murphy’s take on old Hollywood with “Feud: Bette and Joan.”

Now, with the backing of Netflix, he’s able to go even deeper, showing the machinations that power a post-World War II studio.

In “Hollywood,” he mixes fact with fiction, shocks with allegations and gives a handful of actors – chief among them Patti LuPone – plenty to play for maximum effect. It’s a juicy look at the dream factory and the men and women who populate it.

Through the eyes of Jack Castello (David Corenswet), a veteran with big-screen ambitions, we see just how crude – and demanding – it can be. Relying on extra work to get his foot in the door, he accepts a job at a gas station where attendants don’t just service cars. Run by a slick hustler named Ernie (Dylan McDermott), it’s key to an underground that supposedly existed during those star-making years.

Working from home: Exercise, 'Hollywood' and stars at home dominate

Jack has a close encounter with Avis Amberg (LuPone), wife of Ace Studios head Ace Amberg (Rob Reiner), who has his own extra-curricular activities. She helps him get to the right people and, soon, we’re on the lot meeting all sorts of characters, including an aspiring director (Darren Criss), a casting director (Holland Taylor) and a power broker (Joe Mantello) who can green light a film about a woman who jumped off the Hollywoodland sign.

Much of the 10-episode series tracks the fate of the film, including its casting, its politics and its release.

Murphy, who created the series with Ian Brennan, isn’t afraid to confront controversy. He folds real actors with fictitious ones (Rock Hudson and Vivien Leigh are among the names you’ll recognize) and pulls back the curtain on events that colored the past. Hattie McDaniel (cooly played by Queen Latifah) becomes a counselor of sorts to Camille Washington (Laura Harrier), a mixed-race actress who is cast in the leading role in Criss’s film. She faces plenty of taunts and potential firing when the studio gets skittish.

Murphy and Brennan toss in charges of nepotism and give LuPone plenty of scenery to chew. The Tony winner, in fact, emerges from this as the series’ biggest star. She makes the “wife of” much more than an accessory and shows just how influential a home critic might have been. LuPone has fun with Corenswet, too, particularly when he’s just trying to provide for his wife and future child.

While Corenswet’s Cornwell is written fairly straightforward, the actor gives him enough hesitation to make him seem more than just another handsome face. He does a screen test that’s remarkable and a set reaction that’s unforgettable.

Jake Picking’s Rock Hudson, however, is hardly as dimensional. He gets a storyline that’s in keeping with the actor’s real past, but it’s never mined for maximum effect. That undercuts Jeremy Pope, who plays his partner and the author of Criss’s film. Pope scores in scenes with others (again, LuPone) and finds a groove that works.

Much like “Smash,” “Hollywood” wants to make the world far more glamorous than it is. Yes, the movie business is intriguing but, often, it’s just as mechanical as any other industry.

The series doesn’t embrace the mundane but it does humanize the exalted.

It’s filled with profanity and nudity and, in many ways, one-ups Warren Beatty’s “Rules Don’t Apply,” another take on those idealized days of Hollywood.

Considering this is a time when dreams are in short supply, “Hollywood” has plenty to share.

It’s sexy, sizzling and silly, all at one time.

"Hollywood" begins streaming on Netflix in May.

Subtlety? That wasn’t a hallmark of either Joan Crawford or Bette Davis.

LOS ANGELES | When Susan Sarandon made a Facetime call to her granddaughter, she didn’t anticipate the reaction she got.

LOS ANGELES – When the cast of “The Assassination of Gianni Versace: American Crime Story” shot at the fashion designer’s Miami home, the feel…

REVIEW: 'What We Do in the Shadows' is still hauntingly good

The second season of “Shadows” casts a silly spell that makes you ravenous for more than 10 episodes. Somehow, it’s the kind of superb owl (you'll learn the reference) series you don’t see every day.

Easily, the biggest winner is “Some Good News,” actor/director John Krasinski’s YouTube channel. Determined to bring “good news” into the world, he sits at a desk at home and makes like Lester Holt, delivering stories that should draw a smile.

In the upcoming series, Cattrall plays the matriarch of a family involved in religious broadcasting. But don’t get any ideas.

Spoiler alert: Williams beat Gronkowski in the competition. “It was scary,” the former New England Patriots star said. “It made my stomach turn, literally. It made me weak. That’s why Venus won.”

LOS ANGELES – Can great art come from moments of loss?

Who will win the Emmys? 'Watchmen,' 'Schitt's Creek' and 'Succession' are the leaders

You have one month to catch up on your TV viewing. Let Bruce Miller guide you to what you need to watch before the Sept. 20 show (yes, it's going to be Zoomed).

David Corenswet plays an aspiring actor hoping to get a role in "Hollywood."

Patti LuPone plays the wife of a Hollywood mogul in "Hollywood."

Laura Harrier plays an aspiring actress who gets cast in Darren Criss' film in "Hollywood."

Jeremy Pope, left, and Darren Criss work on the script for a new film in "Hollywood."