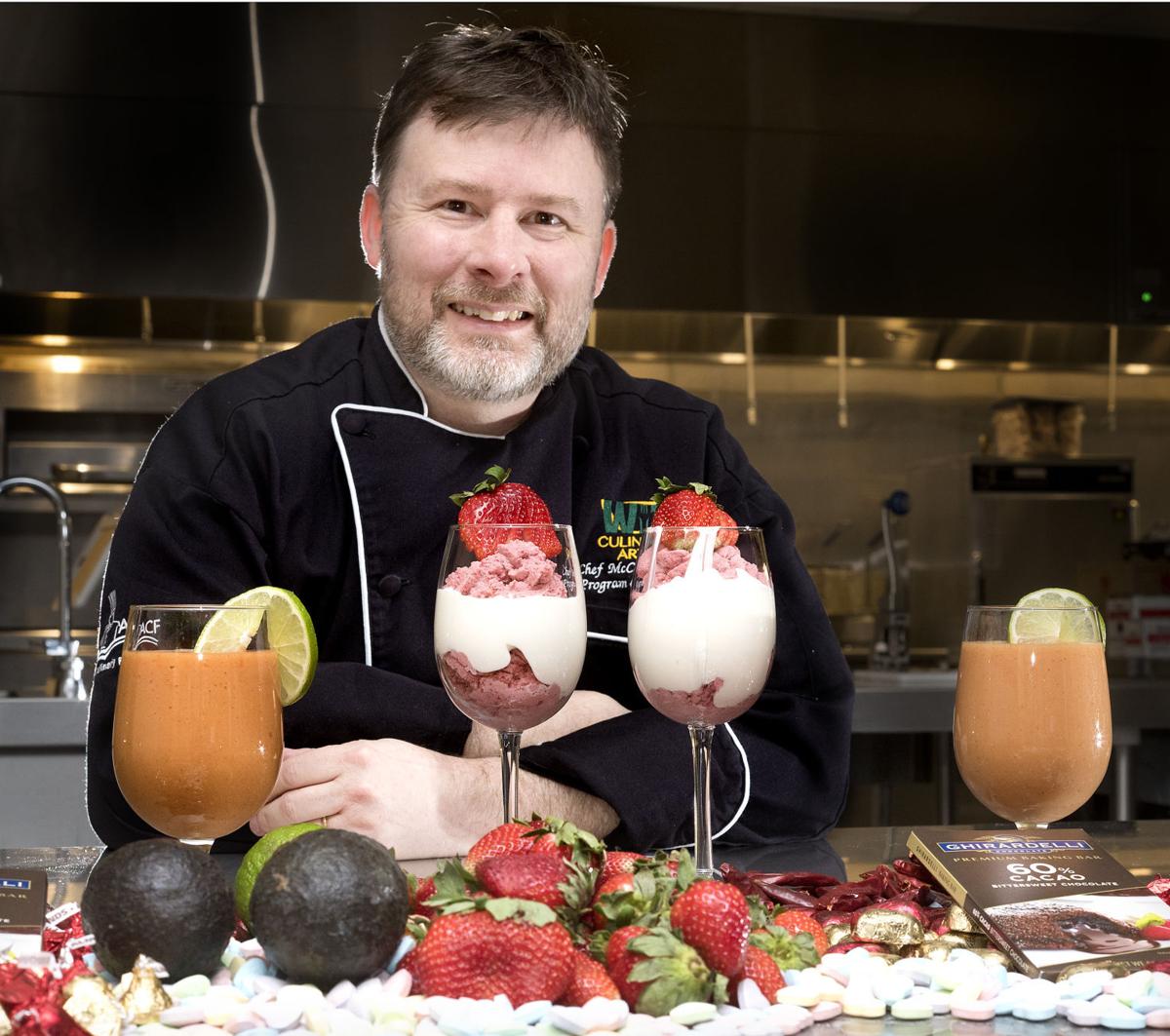 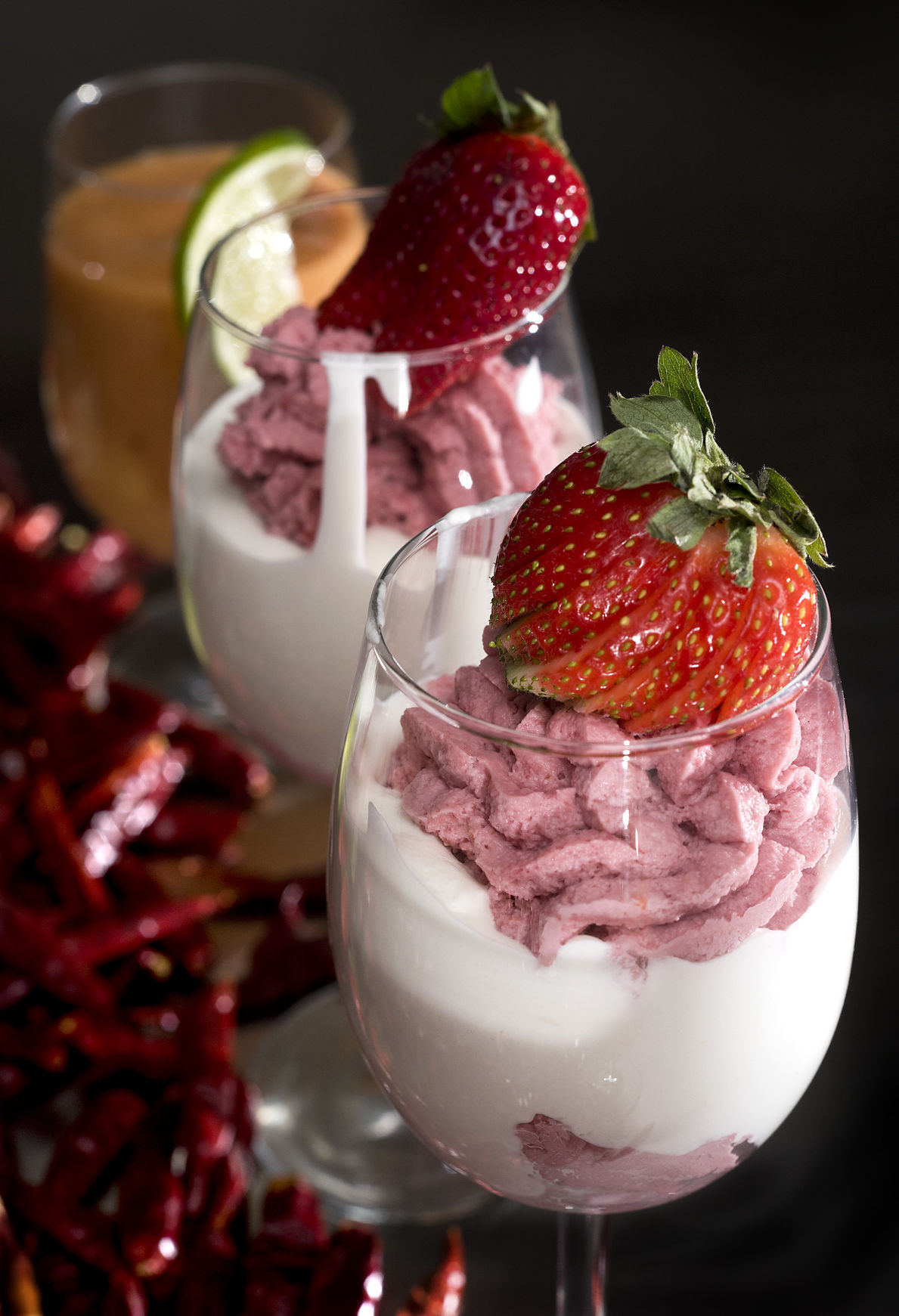 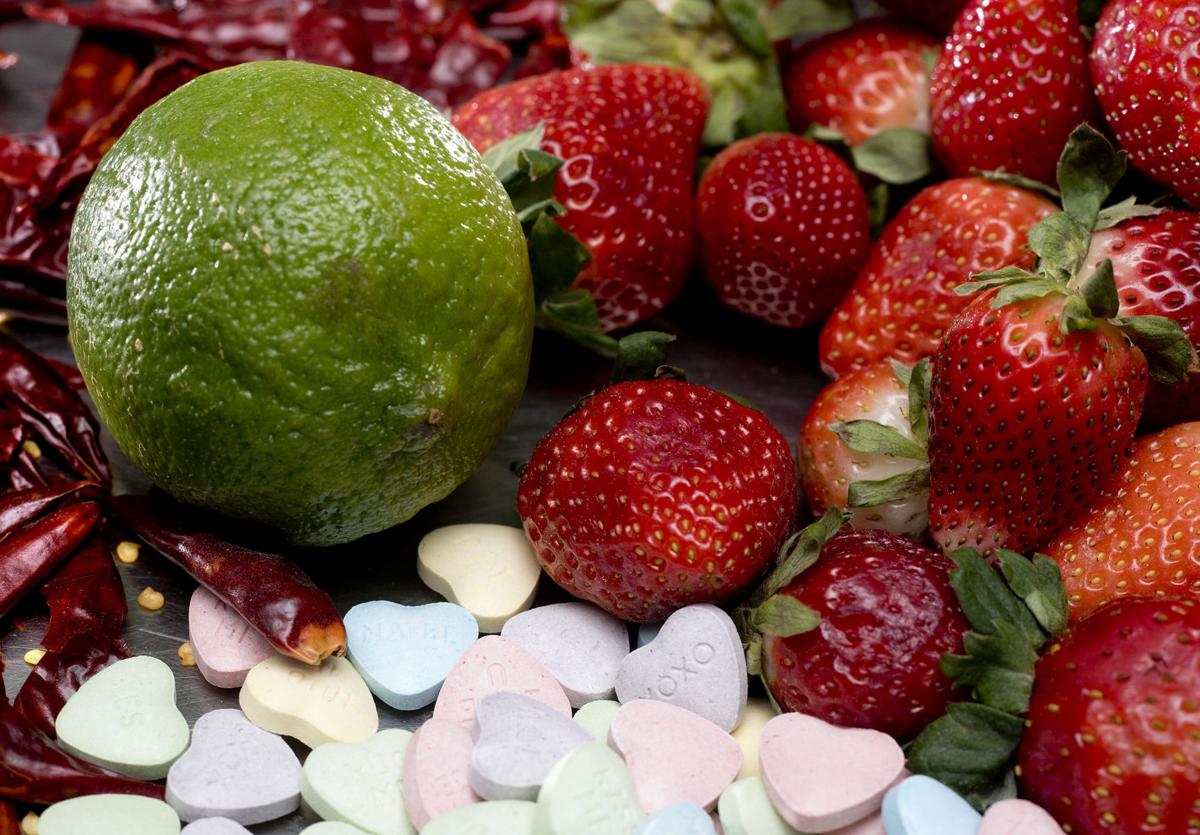 These foods shown in the lab kitchens of the culinary arts program at Western Iowa Tech Community College are purported to be aphrodisiacs.

SIOUX CITY | The saying that the way to a man's (or a woman's) heart is through the stomach is simply a silly, outdated cliche, right?

Well, not according to Western Iowa Tech Community College culinary arts coordinator Brett McCarthy, who said there's a science behind the foods that make us feel amorous.

"Certain ingredients excite us or naturally increase our blood flow," he said. "Those ingredients may make us more alert, give us a sudden burst of energy and, yes, stimulate our sex drive."

With St. Valentine's Day less than than a week away, McCarthy has been creating recipes which showcase long-standing aphrodisiacs that may already exist in your kitchen.

"Valentine's Day wouldn't be the same without chocolate," he said. "Fittingly, chocolate is a very good aphrodisiac."

Chocolate contains an amino acid called L-arginine, which promotes a person's blood flow while increasing sensation, satisfaction and desire. It works for both men and women.

Even more significant is the inclusion of a chemical called phenethylamine.

The same can be said of red wine, which contains a natural chemical compound called resveratrol.

"Resveratrol can be found in grapes, red wines and other foods," McCarthy said. "Because of the resveratrol, researchers said the moderate drinking of red wine can lower the risk of heart disease."

Resveratrol also has been packaged as a nutritional supplement for people seeking a natural antioxidant.

"I don't know all of the health benefits of resveratrol," McCarthy admitted. "But I do know red wine helps to protect the heart's blood flow and that makes it an aphrodisiac."

Hot chilies have a similar effect on one's libido. According to McCarthy, it comes down to a chemical found inside spicy peppers.

"Chilies have capsaicin, which is an active compound that stimulates nerve endings," he said. "For instance, it stimulates your endorphins, speeds up your heart rate and makes you sweat."

In addition, foods ranging from avocado, arugula and oysters have been touted as aphrodisiacs, in large part due to chemical compositions.

"While aphrodisiacs may sound like folklore, there are scientific facts about the foods that simply make us feel sexy," McCarthy said.

"The 'Love' Mousse is creamy and light, with a hint of red to get you in (a romantic) mood," McCarthy said.

In a small bowl, sprinkle a packet of unflavored gelatin over 1/4 cup cold water. In a separate bowl or a stand mixer fitted with whip attachment, whip the heavy cream with 1/2 cup sugar and 2 teaspoons vanilla until it forms stiff peaks. Cover and place in the refrigerator.

Fill a medium saucepan with 2-3 inches of water, bringing it to a boil. Place egg yolks, 1/2 cup sugar and wine in a medium-sized stainless steel mixing bowl. Mix all ingredients thoroughly. Place bowl over the saucepan. Using a balloon or similarly light-gauged whisk, stir the ingredients vigorously until the mixture thickens and starts to form ribbons. As soon as it thickens, remove it from the heat immediately.

(Safety tip: Be sure to have a dry towel handy to keep your hands from getting burned from the steam. Also, keep the bowl at an angle so you can mix the dessert more easily. Make sure the bowl fits just inside the saucepan and keeps the water boiling but not so much that it produces too much steam around the bowl.)

Add the softened gelatin into the red wine/egg/sugar mixture. Return briefly to the boiling pot of water, whisking vigorously until the gelatin is completely dissolved. Remove mixture from the heat and refrigerate uncovered for about 20 minutes until it reaches room temperature.

"The 'Love' Smoothie is sweet at first," McCarthy said. "Then, you feel the spiciness in the back of your throat."

2 cups of your favorite frozen fruit mixture that includes mango, bananas and strawberries

In a blender, blend all of the ingredients until smooth. Pour into your favorite juice or wine goblet. Garnish with a freshly-fanned strawberry or wedge of lime.

SIOUX CITY | On a chilly January morning, singer-songwriter Mike Langley strums an acoustic guitar to the tune of "Ballad O' Love" -- his late…

Will you be "getting' it on" like Marvin Gaye or will "your milkshake be bringing all the boys to the yard" like Kelis, on Valentine's Day?

Gooey or full of nougat, chocolate is key to Valentine's love

When it comes to Valentine's Day, nothing will beat a sweet treat that is either nut-, cherry- or nougat-filled.

Guilt-free eats: Dakota Dunes woman creates dip that is both tasty and healthy

DAKOTA DUNES | Sara Gotch may not be a household name like Rachael Ray or Ina Garten. Yet.

Summertime wines: Go bold and get freaky at your next backyard barbecue

SIOUX CITY | Even though the food world changes constantly, Chef Brett McCarthy is happy some things remain the same.

These foods shown in the lab kitchens of the culinary arts program at Western Iowa Tech Community College are purported to be aphrodisiacs.