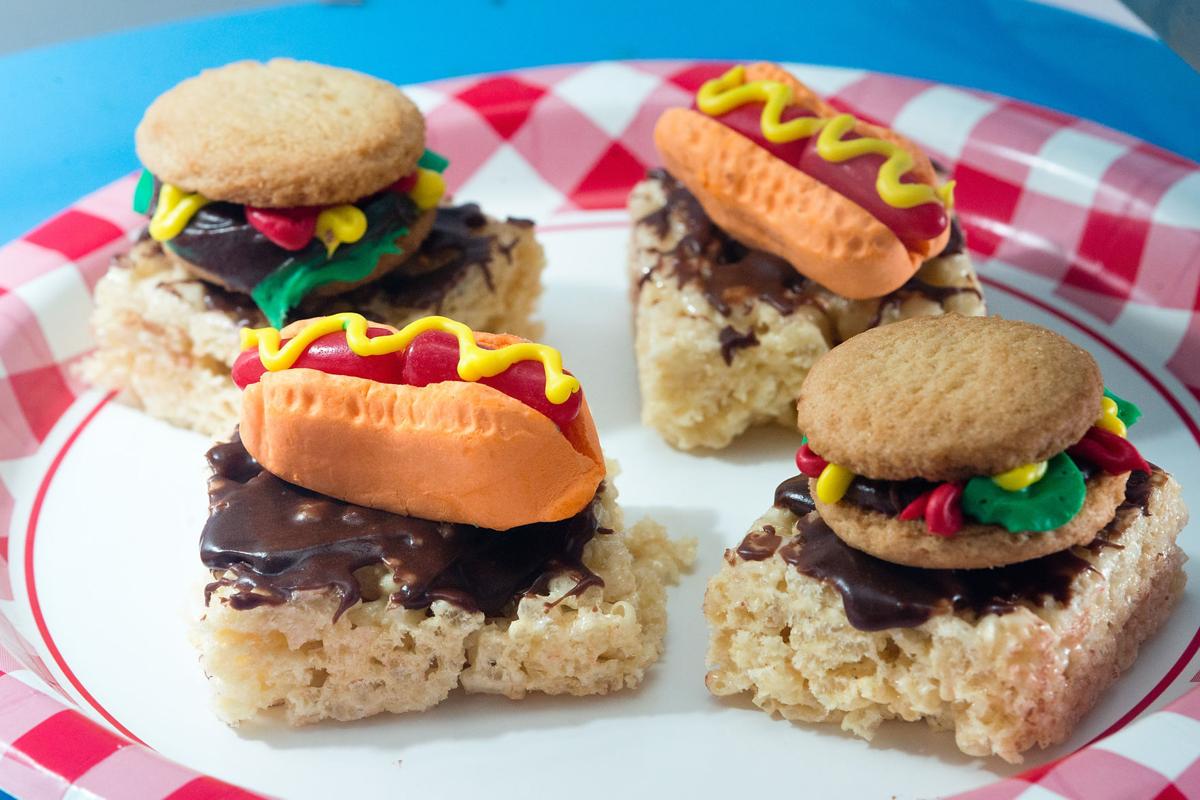 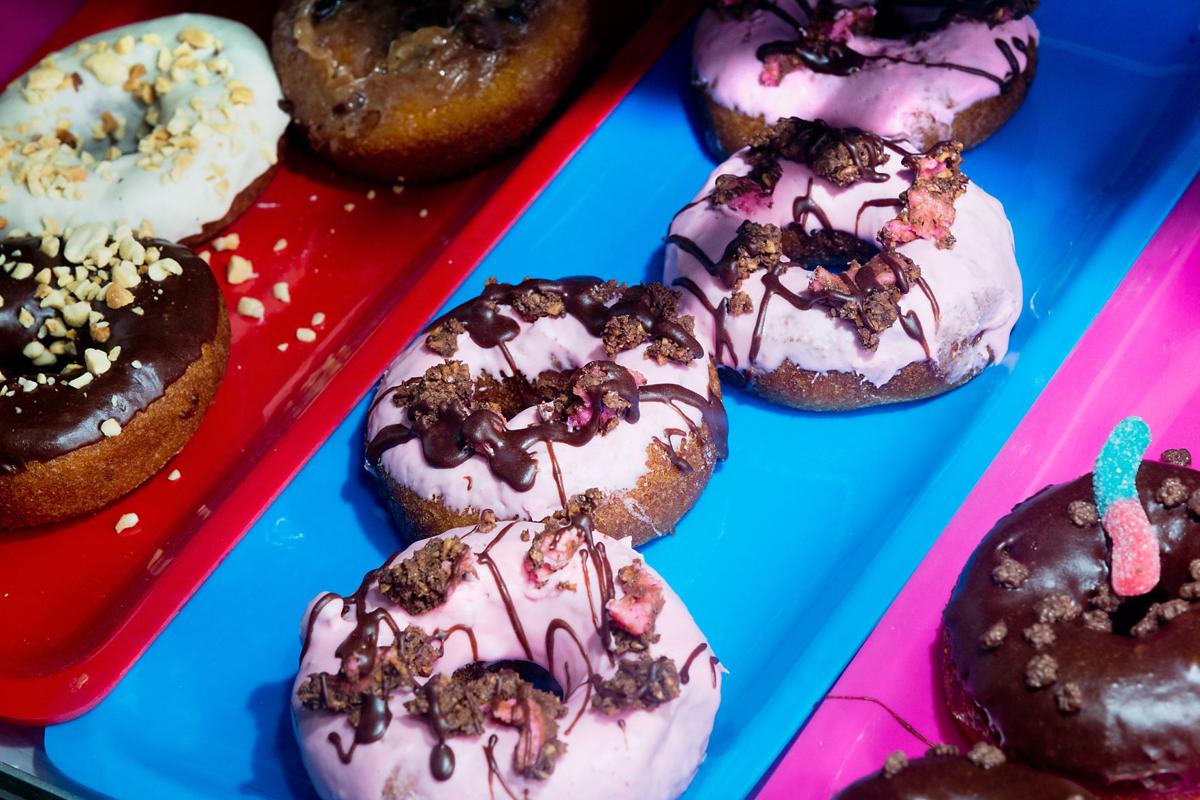 Festive doughnuts made with classic candies are on the menu at Lally's Eastside Restaurant. Stacey Mullally, a granddaughter of Maria and Mike Mullally, sells her baked goods inside of the iconic 125 Plymouth St. S.E. eatery. 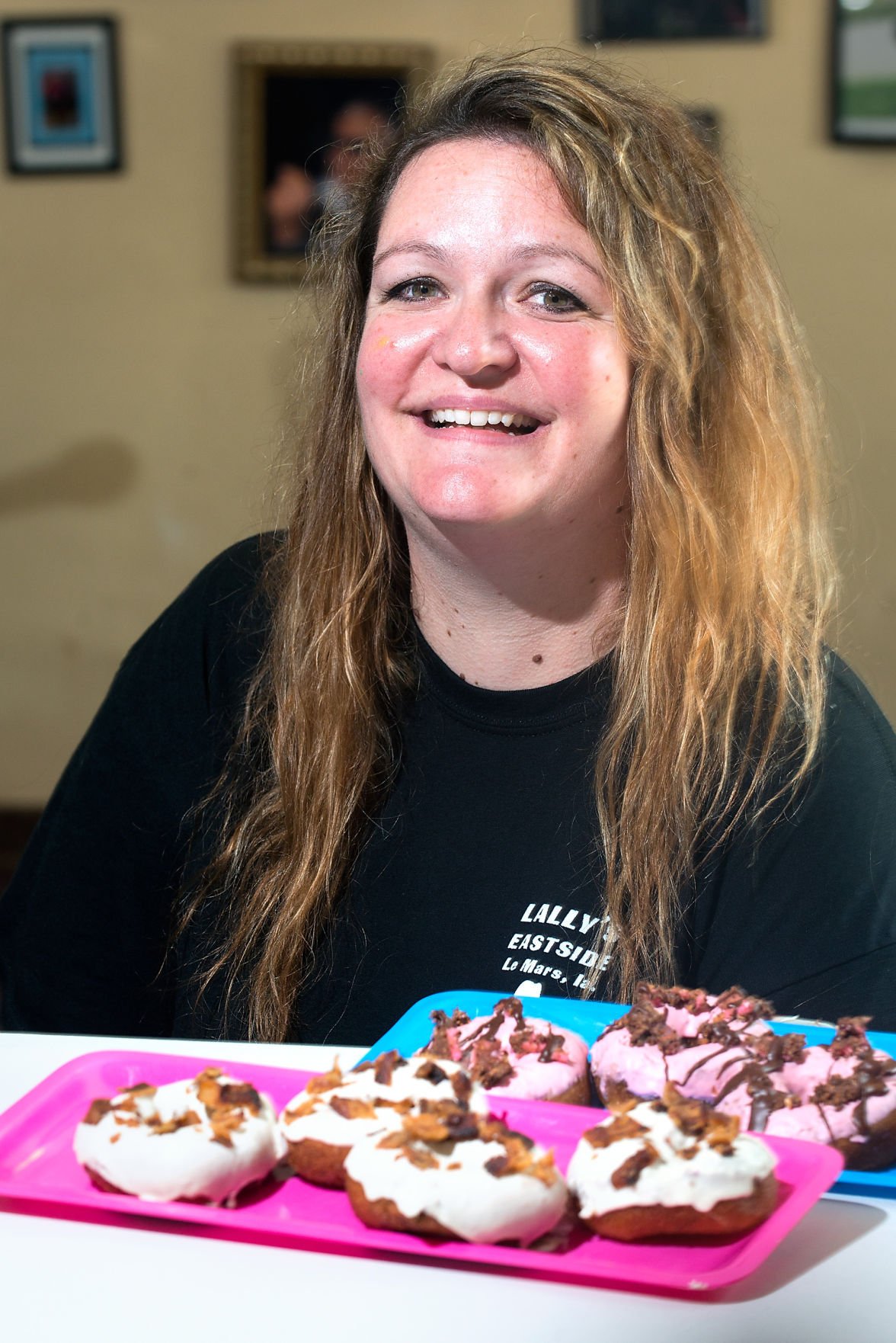 However, Stacey Mullally -- granddaughter of the original owners -- wouldn't mind if the iconic 125 Plymouth St. N.E. eatery also become known as a place to pick up baked goods covered in candy or doughnuts drizzled with maple and bacon.

"I've always loved to baked," she said behind a counter inside the restaurant's dining room. "It seems only natural for me to start making sweet things for Lally's."

Mullally has spent most of her life working in the restaurant started by her grandparents, Maria and Mike Mullally.

Over the years, many of Maria and Mike's kids have owned the business. In 2009, Stacey's parents, Tom and Patty (Gotto) Mullally, took over the day-to-day operations of Lally's.

"This business is as much about Tom's family as it is my own," Patty (Gotto) Mullally remembered. "I met my husband at Lally's when we were both kids and we had our first kiss here. Between Tom's family and my family, we've had more than 80 Mullallys and Gottos working at the restaurant over the years."

That was certainly true for their daughter, who began bussing tables as soon as she was legally old enough to work.

"My parents gave me a terrific work ethic," Mullally said. "Plus I got to learn the ins and outs of the food business from them."

Which came in handy when she moved to Texas and began working for Kroger, the largest supermarket chain in the U.S. based on revenue.

"I worked for their bakery departments," Mullally explained. "Every time Kroger opened a new bakery in the state of Texas, they'd transfer me to it. It was a wonderful opportunity for me to move around and I loved it."

However, a health scare required Mullally to return to her hometown of Le Mars more than three years ago.

"Even though he's fine now, my dad began having some medical issues," she said.

This is when Mullally began thinking of Lally's as a third-generation family business.

"My parents aren't going to retire for a while, but they wanted to be able to take time off," she said. "I'm just offering a helping hand."

Mullally said much of Lally's menu is the same as it has always been.

"We have a loyal core of customers who expect certain things," she said. "They still want their chicken, ribs, and hamburger steak, and we're happy to make them the old-fashioned way."

Mullally has seen a steady increase in the number of young families stopping by Lally's.

"People get tired of fast food and they're coming back to traditional, full-service restaurants," she said.

"We're basically just starting out," she said. "Even if we're successful, our baked goods will just be an extension to our restaurant business."

Currently, she is perfecting a classic candy series of cupcakes.

"Even if the recipes don't turn out the way I want, they're still tasty," she added.

On a busy Wednesday afternoon, Mullally greets many of Lally's lunchtime regulars by their first names.

Indeed, many of the loyal customers have been coming to Lally's before Mullally was born.

"You don't see too many family-owned restaurants in business for more than 56 years," she said. "We've been very lucky."

Still Mullally has a few tricks up her sleeve.

"I'd love it if our baked goods will become as memorable as our broasted chicken," she said.

LE MARS, Iowa | Craig Singer has been playing music longer than he has been smoking meats.

LE MARS, Iowa -- Would you like milk or sugar with your coffee? OK, how about some butter in your cup of joe?

SIOUX CITY | When it comes to championship baking, Terri Treft insists you need to be able to think outside the box.

SIOUX CITY -- Iris Hammer said her downfall has always been a love for chocolate.

SIOUX CITY --  This Friday, Aaron Sailer will be making more than 1,500 fresh-from-the-fryer donuts at his Sioux City bakery.

"This may not be the typical Mother's Day for many but we'll make the most of it," Sneaky's Chicken's Christy Wright said.

SIOUX CITY -- In little over a year, the iconic Bing candy bar has been turned into a stout beer and a cherry-flavored ice cream.

PennyWise Episode 39: Easy ways to save money on holiday decorations this year

Festive doughnuts made with classic candies are on the menu at Lally's Eastside Restaurant. Stacey Mullally, a granddaughter of Maria and Mike Mullally, sells her baked goods inside of the iconic 125 Plymouth St. S.E. eatery.