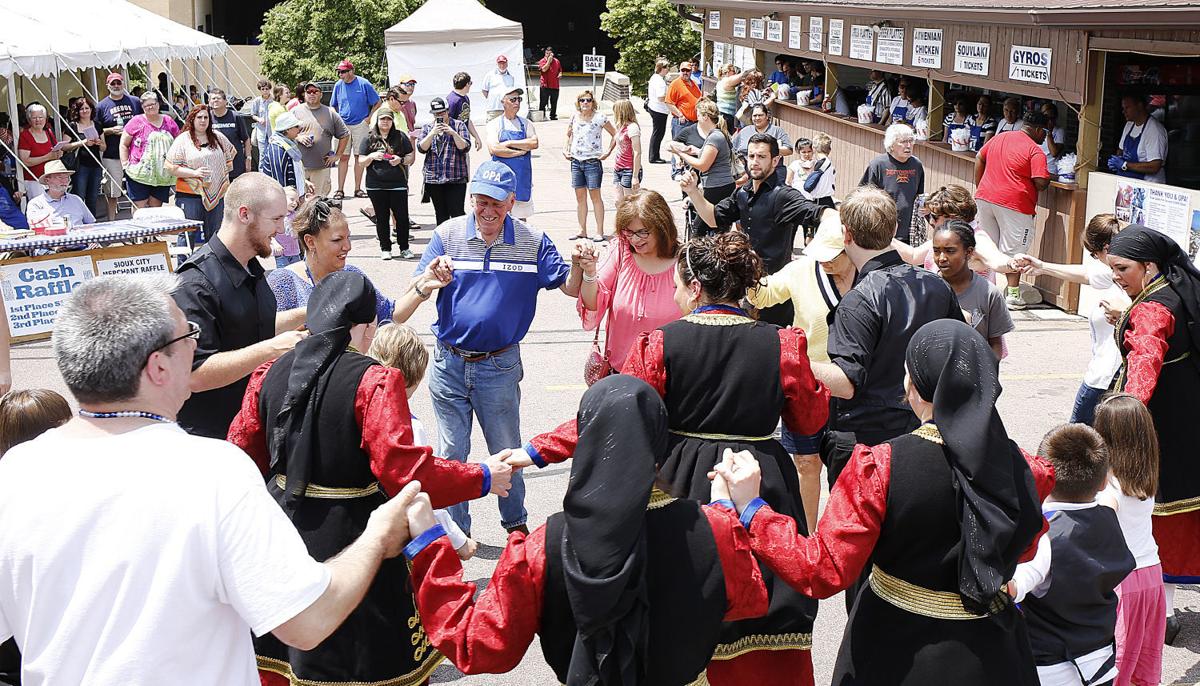 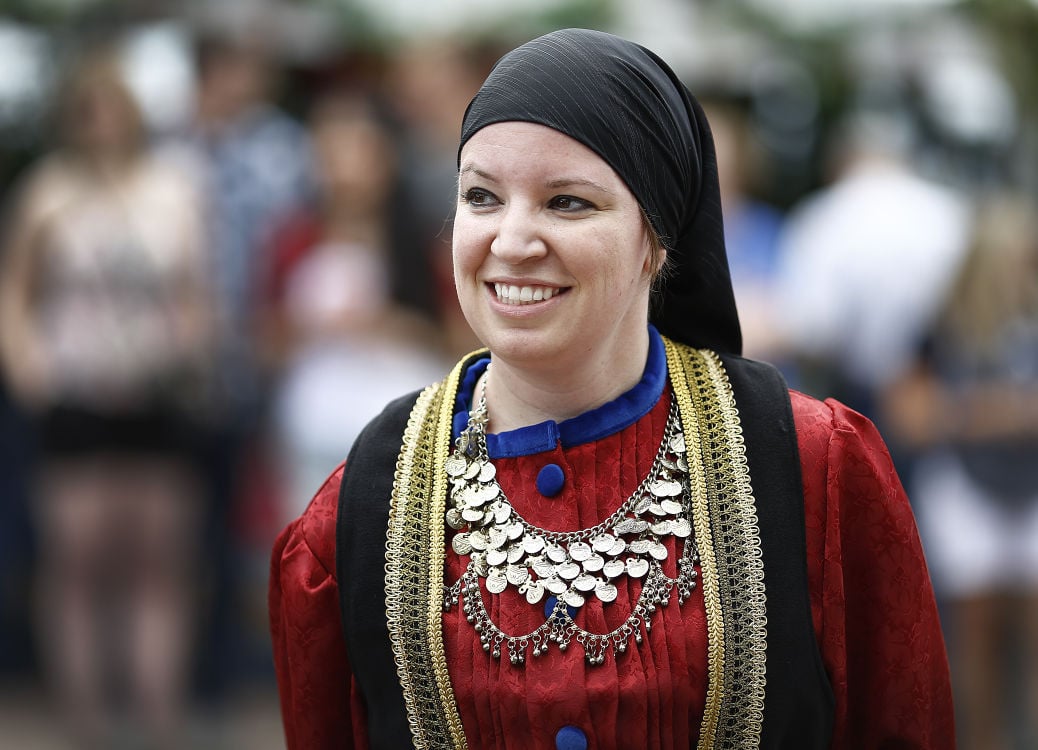 Nicole Madsen, a member of The Aegean Dancers, performs during the 2915 Greek Fest. 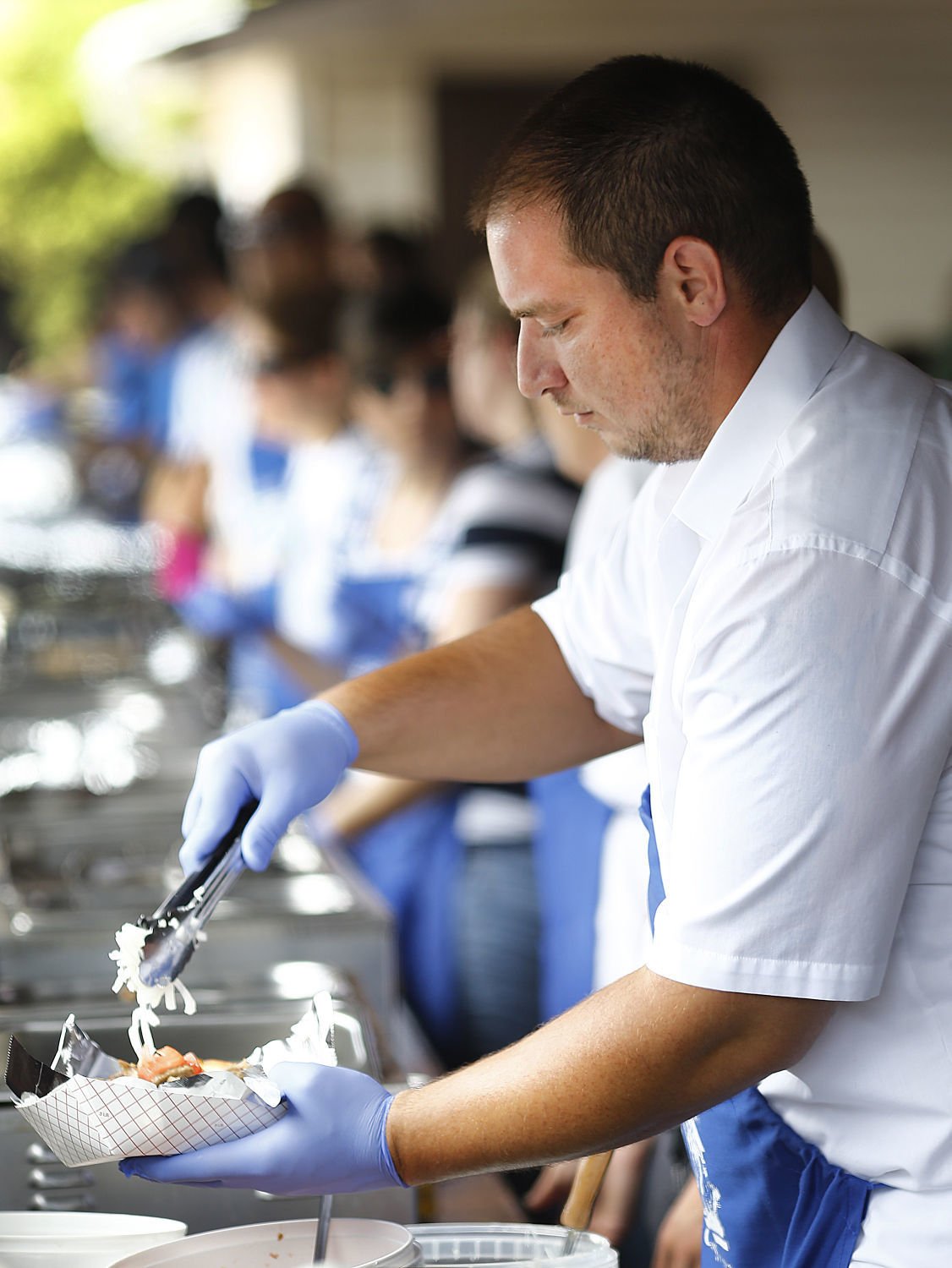 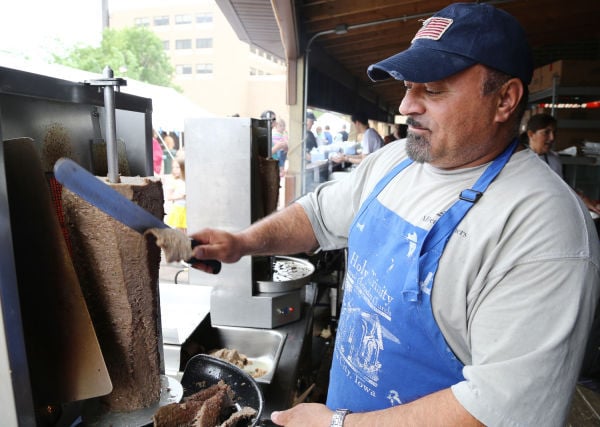 Tom Fountoulakis slices the traditional blend of beef and lamb gyro meat during 2014's Greek Fest. This year, a chicken gyro will also be available. 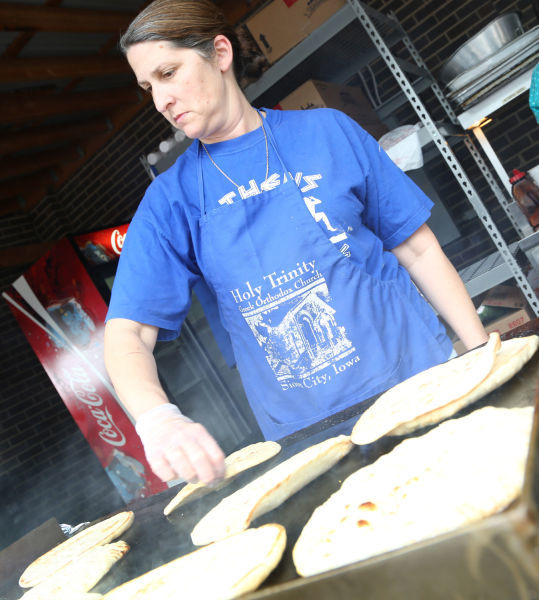 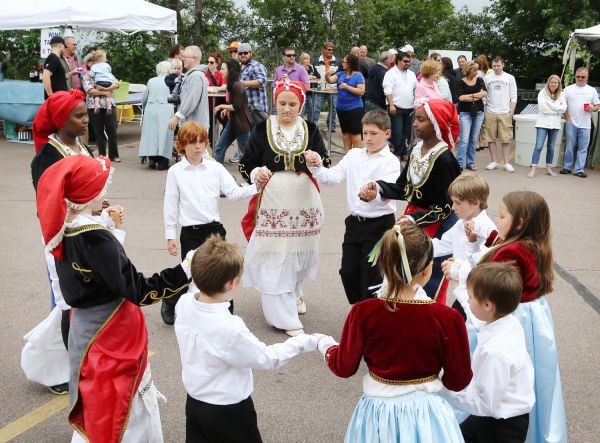 The Pegasus dancers perform in traditional costume Saturday during GreekFest at Holy Trinity Greek Orthodox Church. The festival continues from 11 a.m. to 6 p.m. Sunday at the Sioux City church.

SIOUX CITY | Holy Trinity Greek Orthodox Church's 16th annual Greek Fest will have all of the dancing, live bands and authentic food that people have grown accustomed to.

But committee member Christine McAvoy said many innovations will be added to this year's event.

"For many years, people have suggested a more convenient way to pick up meals," McAvoy said. "We'll be offering a limited menu for pick-ups for people driving up on Sixth Street."

In addition, chicken gyros will be on this year's Greek Fest menu, along with the more traditional lamb and beef gyros.

People also love the multitude of Grecian sweet treats. McAvoy said many of the most popular pastries will now be prepackaged for convenience.

Mediterranean specialty food items like pastas, cheeses and coffees also are being made available for purchase at the festival's bazaar.

"A lot of these items are hard to find," McAvoy said. "They will be available here."

Also available will be frozen versions of many Greek Fest favorites.

"We've had so many people who tell us that they get a hunger for Greek food a month after the festival," McAvoy said. "Greek food freezes well, so you can eat it at your convenience."

"We have some of the best Greek chefs around," McAvoy said. "This year, they will be sharing their knowledge."

Even though Greek food isn't commonplace in the Midwest, the ubiquitous gyro is.

That's because the meaty and tzatziki sauce-filled sandwich is surprisingly versatile.

This will be the case from 11 a.m-2 p.m. Sunday, when special Greek-style "steak and eggs" gyros will be available.

"Greek Fest has been around for a while but we always wanted to make things different and more fun," McAvoy said. "I think people will be pleased with all of the changes we're making this year."

New this year: Limited menu for convenient pick-up; prepackaged pastries and gourmet or frozen foods available for purchase. Also, food demonstrations will be scheduled alongside entertainment that includes live bands and dancing.

Cost: Free admission. Tickets for food may be purchased at the door.

Following a recipe inside a notebook, Barbara Lammers, 78, rolled out a layer of phyllo dough that will soon form the base of her baklawa.

"I have released the Kraken!" exclaimed Dolf Ivener, paraphrasing a quote  attributed to Zeus regarding a mythical sea monster.

The celebration of Passover represents family and a shared history

The eight days of Passover -- which begins Monday and ends April 21 -- commemorate the exodus of Israelites from slavery in Egypt.

SIOUX CITY | It took more than three years of planning and fundraising, but the Rev. Dimitri Tobias is ecstatic over the installation of two l…

These meal options will make your Thanksgiving easier

These meal options will make your Thanksgiving easier

Nicole Madsen, a member of The Aegean Dancers, performs during the 2915 Greek Fest.

Tom Fountoulakis slices the traditional blend of beef and lamb gyro meat during 2014's Greek Fest. This year, a chicken gyro will also be available.

The Pegasus dancers perform in traditional costume Saturday during GreekFest at Holy Trinity Greek Orthodox Church. The festival continues from 11 a.m. to 6 p.m. Sunday at the Sioux City church.