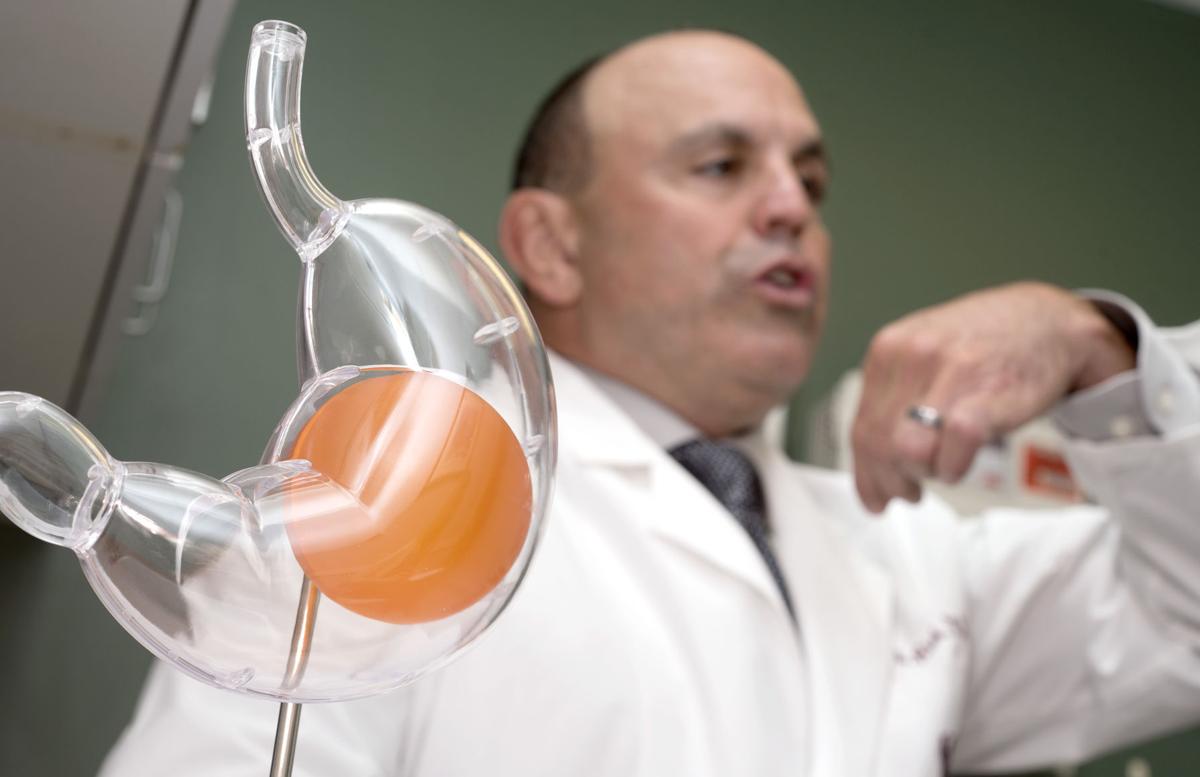 William Rizk, a bariatric surgeon, explains how ORBERA, an intragastric balloon, is inserted into the stomach behind a teaching model of the device at Midlands Clinic in Dakota Dunes. 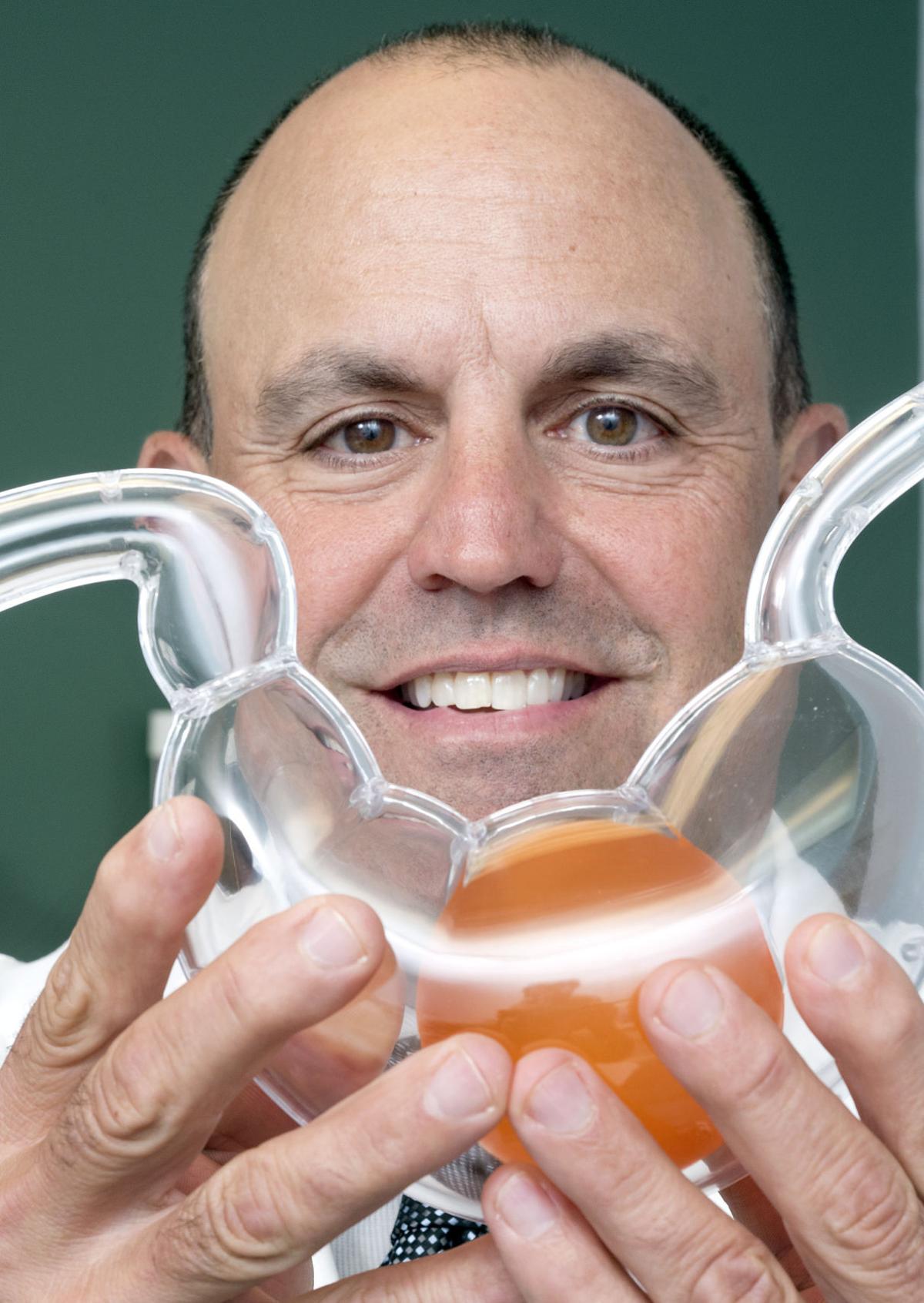 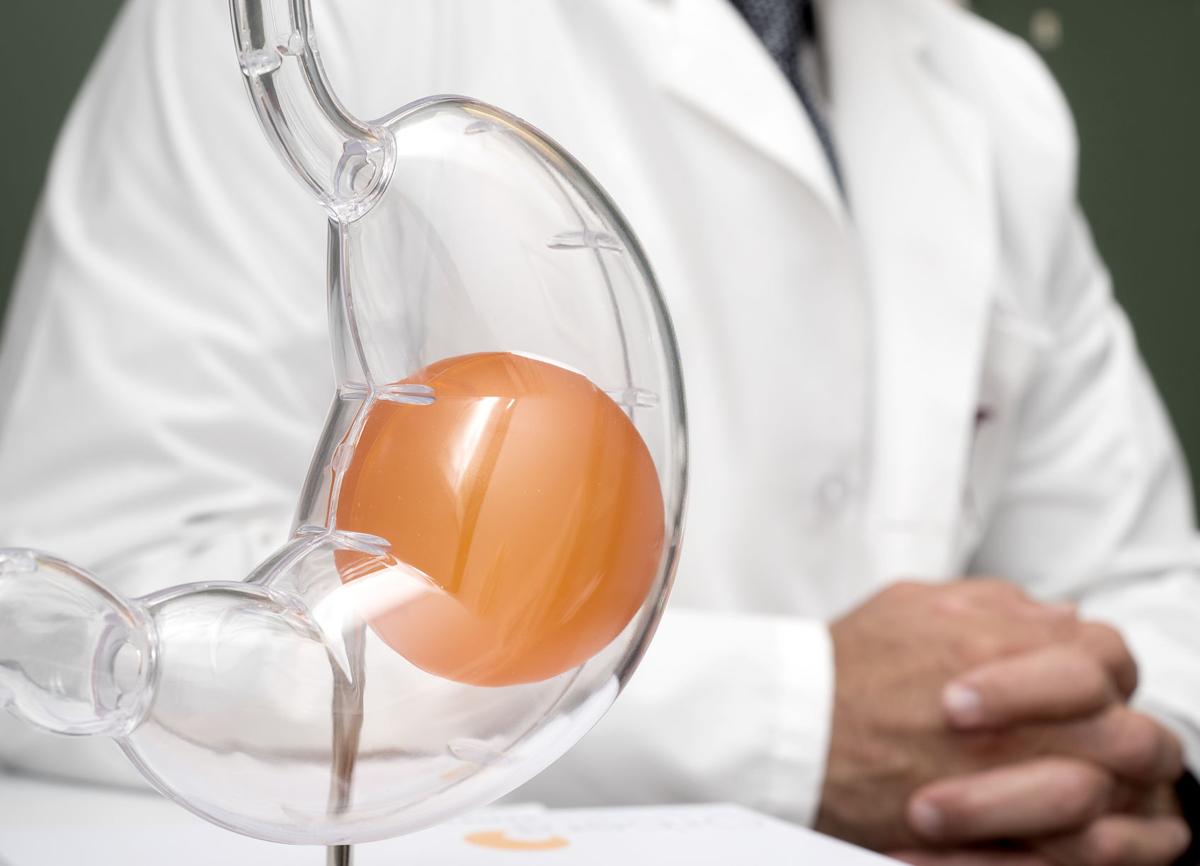 DAKOTA DUNES, S.D. | A silicon balloon designed to help those struggling with diet and exercise shed excess pounds is now available in Siouxland.

ORBERA, an intragastric balloon, has been used for weight loss worldwide for years, but the device, which has been placed more than 220,000 times in patients' stomachs, didn't gain U.S. Food and Drug Administration approval until August 2015.

William Rizk, a bariatric surgeon who is offering the device at Midlands Clinic along with his colleague Keith Vollstedt, said a previous gastric balloon was an option in Siouxland 20 years ago, but he said that particular model had a much higher complication rate than that of ORBERA.

"This new balloon is made of different material and instead of being filled with air it's filled with saline. It tends not to leak or deflate like the old ones did," he said. "I think we kind of gave it a try 20 years ago and it didn't work so well, so we kind of shelved it."

Rizk placed ORBERA in a Siouxland patient for the first time about seven weeks ago. Since then, he said the patient has lost more than 20 pounds. He said the balloon, which isn't covered by health insurance, must be paired with a dietary coaching program to ensure success.

He said ORBERA, which is less invasive than the other weight loss procedures, will appeal to patients with a BMI between 30 and 40 who don't qualify for weight loss surgery.

"If someone has diabetes or high blood pressure and their BMI is 32 and we can get them with this tool to lose 40 pounds, that would really dramatically improve their health," Rizk said.

ORBERA is inserted with a scope through the esophagus into the stomach while the patient is sedated. Then the balloon is inflated with 600 milliliters of saline to about the size of a grapefruit. The procedure takes about 15 minutes, according to Rizk, who said patients can return home about two hours later.

He said ORBERA, which he likens to a breast implant, takes up space in the stomach, causing the patient to feel full after consuming a smaller amount of food.

"When you start losing weight the first few pounds come off rather quickly. When you place the balloon, the first week is kind of an adaptation phase," he said. "There can be some symptoms of nausea in the first week, which really limits how much people can eat. Maintaining hydration is really important."

The balloon stays in place for six months, then Rizk said it's punctured and retrieved in a procedure similar to how it was inserted.

The FDA trial that assessed the safety and effectiveness of ORBERA showed patients with the device who participated in diet and exercise lost 3.1 times more weight than people who just tried to lose weight with diet and exercise alone.

A year later, Rizk said trial participants who had the balloon gained a small amount of weight back, but maintained the majority of their weight loss and still managed to lose more weight than participants who relied on diet and exercise alone.

"It's another kind of weapon in our arsenal or tool in our toolbox," Rizk said. "For a specific patient it can be really good, but as the BMI gets higher, that balloon may not be appropriate."

1. Laparoscopic sleeve gastrectomy -- newest weight loss procedure that removes a portion of the stomach and re-shapes the remaining stomach into a sleeve.

2. Laparoscopic gastric bypass -- divides the stomach into a small upper section where food will go when eaten and a larger bottom section and then re-arranges the small intestine to connect to both.

3. Laparoscopic gastric banding -- places a band around the upper part of the stomach to create a small pouch to hold food.

SIOUX CITY | Families participating in a new program designed to curb childhood obesity had one assignment: to eat breakfast everyday and try …

SIOUX CITY | Judy Stanwick noticed something was off with her gait on a Monday in September 2014.

Maybe you've resolved to shed a few extra pounds in 2016. Be cautious about jumping on the fad diet bandwagon.

SIOUX CITY | Diabetes, which has been on the rise in the United States since 1980, is an expensive chronic condition to manage, whether you ha…

William Rizk, a bariatric surgeon, explains how ORBERA, an intragastric balloon, is inserted into the stomach behind a teaching model of the device at Midlands Clinic in Dakota Dunes.