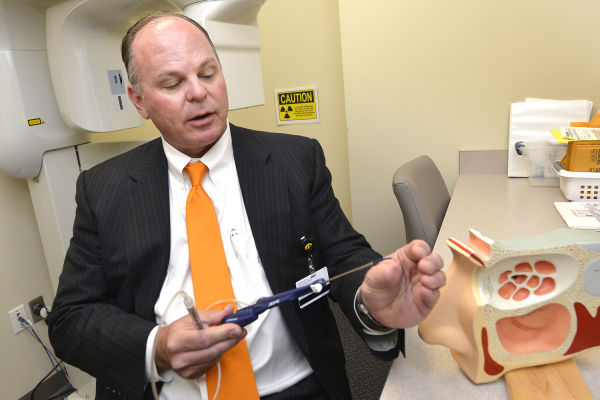 Dr. David Wagner uses a balloon to open up sinus passages in a new sinus treatment. It's completed in about an hour. 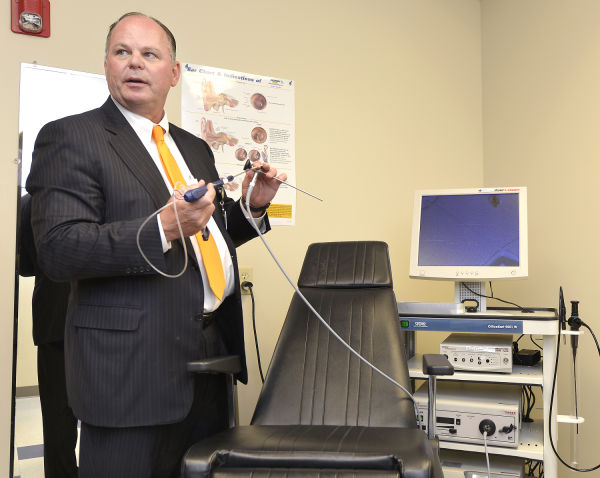 Dr. David Wagner shows the tools he uses for an in-office sinus procedure at his Wagner Ear Nose & Throat practice. 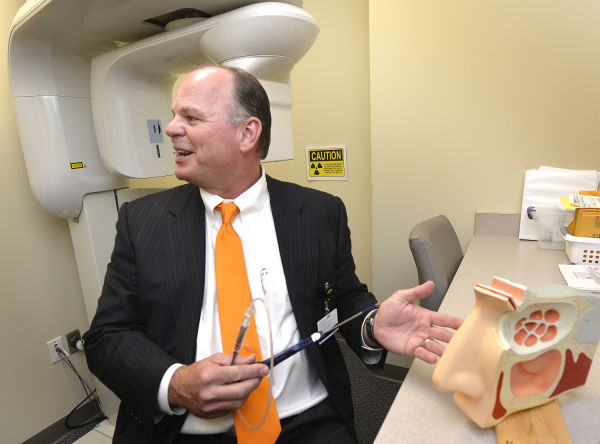 SIOUX CITY | Facial pain, pressure and nasal drainage -- common symptoms of chronic sinusitis -- can now be easily treated in a select group of patients in a doctor's office under local anesthetic with a small, flexible balloon probe.

Inflammation of the sinuses -- hollow cavities in the bony facial skeleton -- affects 40 million Americans each year, according to the Centers for Disease Control and Prevention.

David Wagner, a Sioux City ear, nose and throat specialist, said sinusitis is a "two-front war" for most patients involving inflammatory changes in the nasal and sinus lining and narrowing of the sinus pathways.

He said allergens and viral infections can inflame the nose and sinuses causing the tissue and small passages to swell. The way the sinuses develop from birth and polyps growing in the nose can also inhibit proper drainage, according to Wagner.

Physicians have traditionally used endoscopic instruments such as shavers to enlarge the openings into the sinuses, a technique that can cause trauma to surrounding tissues. The new balloon probe procedure, which Wagner began doing in his office on UnityPoint Health -- St. Luke's campus a year ago, can restore proper sinus drainage in many patients with little distress.

"We can actually slide the balloon up into the area and enlarge and dilate it as opposed to having to surgically remove tissue," he said. "One of the fundamental principles of more modern sinus work is to preserve as much structure and mucosa as possible. When we do that, there's quicker healing and less recovery time for the patient."

Before choosing a course of action, Wagner takes a low-dose CT scan of his patient's sinuses to pinpoint diseased areas, and he performs a physical examination with an endoscope.

About 20 percent of patients with sinusitis experience narrowing solely in the infundibulum, a small pathway into the maxillary sinus (the largest of the paranasal sinuses), according to Wagner. A single dilation with a balloon catheter, he said, can correct this problem.

"A balloon can go in simply dilate that and create microfractures of some of the bone without tearing the mucosa," he said. "Once that pathway is opened up, the sinus can heal."

Another six percent of patients with sinus troubles, Wagner said, suffer blockage in the sphenoid sinus at the back of the skull. The balloon probe he said, can also be manipulated to create an opening there.

Ninety minutes before the procedure, the patient receives a sedative and his or her nasal cavity is numbed. While seated in a chair in a semi-supine position, Wagner inserts a nasal telescope and a light into the nose and sinus passages to locate the affected area. A bender allows him to manipulate instruments to fit the patient's anatomy. He said every individual's sinuses are unique, like a fingerprint.

"We customized the shape of the instrument to work up into that narrow space, position it and advance the balloon probe into the proper position," he said.

When the balloon probe is in place, Wagner inflates it with a water solution. Patients may feel pressure and hear cracking as the balloon expands, creating micro fractures in the bone surrounding the sinuses. The procedure takes about an hour.

Bleeding, pain and recovery time, Wagner said, is minimal compared to traditional sinus surgery. Patients, he said, can have the procedure done on Friday and go back to work on Monday.

"This is a new dimension of sinus care we are excited about," he said. "This is a nice option in between to give patients who don't want to go on to surgery, and it may be a better application for select patients."

Sinusitis by the numbers

61.2 million workdays are lost annually due to sinusitis.

$18.3 billion are spent annually by employers on lost workdays because of sinusitis.

4 sinuses are located in the facial skeleton.

7 to 10 days is the length of an outbreak of acute rhinosinusitis triggered by virus, cold, allergies, environment or anatomical irregularities.

12 plus weeks patients with chronic rhinosinusitis may suffer from swelling and drainage.

How to Choose an Ear, Nose and Throat Specialist

Anyone who has ever suffered from a sore throat, ear infection or sinusitis knows the pain and discomfort caused by these problems.

Is it a cold, flu, sinus infection or allergies?

Cold, flu, sinusitis and allergies all cause respiratory problems.

Do we really gain weight in the winter?

Do we really gain weight in the winter?

PennyWise Episode 45: Four issues that can impact your home and wallet during the winter months

PennyWise Episode 45: Four issues that can impact your home and wallet during the winter months

Dr. David Wagner uses a balloon to open up sinus passages in a new sinus treatment. It's completed in about an hour.

Dr. David Wagner shows the tools he uses for an in-office sinus procedure at his Wagner Ear Nose & Throat practice.