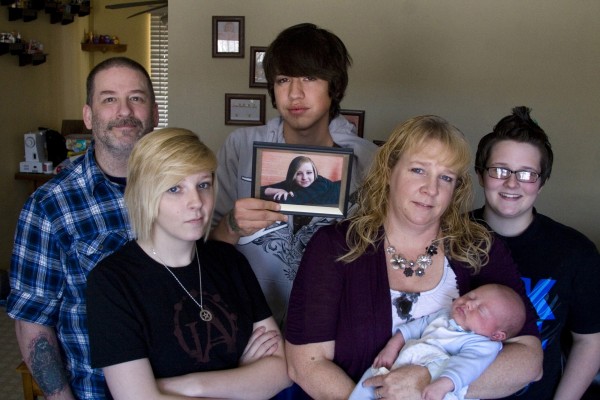 Jenni Lake's family, from left, father Mike Lake, sister Kaisee Lake, boyfriend Nathan Wittman, mother Diana Phillip with Jenni's newborn son Chad Michael Lake Wittman, and sister Ashley Lake pose for a portrait in Pocatello, Idaho. Jenni Lake, who decided against treatment for tumors on her brain and spine so she could carry the baby, died of cancer on Nov. 21, 2011, 12 days after giving birth to Chad. 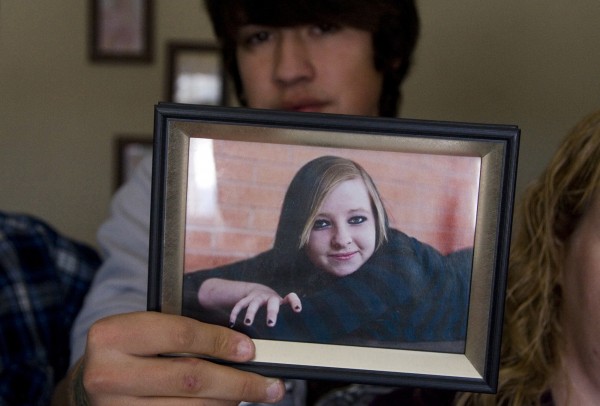 Nathan Wittman, 19, holds a photo of Jenni Lake, who died of cancer shortly after giving birth to their son, Chad Michael Lake Wittman, at the family's home in Pocatello, Idaho.

POCATELLO, Idaho — Jenni Lake gave birth to a baby boy the month before her 18th birthday, though she was not destined to become just another teenage mother.

That much, she knew.

While being admitted to the hospital, she pulled her nurse down to her at bed level and whispered into her ear. The nurse would later repeat the girl's words to comfort her family, as their worst fears were realized a day after Jenni's baby was born.

"She told the nurse, 'I'm done, I did what I was supposed to. My baby is going to get here safe,'" said Diana Phillips, Jenni's mother.

In photographs, the baby's ruddy cheeks and healthy weight offer a stark contrast to the frail girl who gave birth to him. She holds the newborn tightly, kissing the top of his head. Jenni, at 5 feet and 4 inches tall, weighed only 108 pounds at the full term of her pregnancy.

A day after the Nov. 9 birth, Phillips learned that her daughter's decision to forgo treatment for tumors on her brain and spine so she could carry the baby would have fatal repercussions. The cancer had marked too much territory. Nothing could be done, Phillips said.

It was only 12 days past the birth — half spent in the hospital and the other half at home — before Jenni was gone.

Even so, her family and friends insist her legacy is not one centered in tragedy, but rather in sacrifice.

This month, her family gathered at their ranch style home in Pocatello, where a Christmas tree in the living room was adorned with ornaments picked out just for Jenni, including one in bright lime green, her favorite color. She had passed away in a bedroom down the hall.

Recalling Jenni's infectious laugh and a rebellious streak, her mother held the baby close, nuzzling his head, and said, "I want him to know everything about her, and what she did."

The migraines started last year, when Jenni was a 16-year-old sophomore at Pocatello High School. She was taken to the family doctor, and an MRI scan found a small mass measuring about two centimeters wide on the right side of her brain.

She was sent to a hospital in Salt Lake City, some 150 miles south of Pocatello, and another scan there showed the mass was bigger than previously thought.

Jenni had a biopsy Oct. 15, 2010, and five days later was diagnosed with stage three astrocytoma, a type of brain tumor. With three tumors on her brain and three on her spine, Jenni was told her case was rare because the cancer had spread from her brain to another part of her body with no symptoms.

Her parents, who are divorced, remember they were brought into a room at the hospital and sat down at a long table as doctors discussed her chances of survival.

"Jenni just flat out asked them if she was going to die," said her father, Mike Lake, 43, a truck driver who lives in Rexburg, north of Pocatello.

The answer wasn't good. With treatment, the teen was told she had a 30 percent chance to make it two years, Lake said. While he was heartbroken, Lake marveled at how strong she seemed in that moment. "She didn't break down and cry or anything," he said.

But her mom recalled Jenni did have a weak moment that day.

"When they told her that she might not be able to have kids, she got upset," said Phillips, 39.

Jenni started aggressive chemotherapy and radiation treatments, while also posting videos on a YouTube site titled "Jenni's Journey," where she hoped to share her story with updates every other day. She managed to upload only three videos, though, as her treatments left her tired and weak.

On her second video, posted Nov. 20, 2010, Jenni appears distraught while a family friend records her having lunch with her mom.

"Last night, like, I was just lying in bed and I was thinking about everything that was going on and it just like, it just hit me, like everything, and I don't know, it made me cry," Jenni says on the video.

Her mom is shown burying her face in her hands. "Do you know how hard it is to be a mom and know that she's sick and there's nothing you can do," she says, before collapsing into tears.

Jenni persists: "It's hard. It's like, I don't know how long this is going to last and I just want it to go away ... I feel like this is holding me back from so much ..."

By March of this year, the tumors had started to shrink, the family said.

In a picture taken at her prom in early May, Jenni is wearing a dark blue strapless dress and gives the camera a small smile. There's a silver headband in her hair, which is less than an inch long. Chemotherapy took her shoulder-length blond tresses.

Her boyfriend, Nathan Wittman, wearing a black dress shirt and pants, is cradling her from behind.

Jenni started dating Nathan a couple of weeks before she received her diagnosis. Their adolescent relationship withstood the very adult test posed by cancer, the treatments that left her barely able to walk from her living room to her bedroom, and the gossip at school.

"The rumors started flying around, like Nathan was only with her because she had cancer," said Jenni's older sister, Ashlee Lake, 20, who tried to squelch the mean-spirited chatter even as the young couple ignored it.

They were hopeful, and dreamed of someday opening a restaurant or a gallery.

Jenni had been working as an apprentice in a local tattoo shop. "She was like our little sister," said the owner, Kass Chacon. But in May, Jenni's visits to the shop grew less frequent.

She had been throwing up a lot and had sharp stomach pains. She went to the emergency room early one morning with her boyfriend and when she returned home, her family members woke up to the sound of crying. "We could hear Jenni just bawling in her room," said her sister, Kaisee, 19.

She had learned that she was pregnant, and an ultrasound would show the fetus was 10 weeks old.

Jenni's journey was no longer her own.

From the start of treatment, she was told that she might never have children, her mother said, that the radiation and chemotherapy could essentially make her sterile.

"We were told that she couldn't get pregnant, so we didn't worry about it," said Nathan, 19.

Jenni, the third of her parents' eight children, had always wanted to be a mom. She had already determined to keep the baby when she went to see her oncologist, Dr. David Ririe, in Pocatello two days after she found out she was pregnant.

Dr. Ririe would not discuss Jenni's care, citing privacy laws, but said, generally, in cases in which a cancer patient is pregnant, oncologists will consider both the risks and benefits of continuing with treatment, such as chemotherapy.

"There are times during pregnancy in some situations, breast cancer being the classic example, where the benefits of chemotherapy may outweigh the risk to mother and baby," Ririe said. "There are other times where the risk outweighs the benefits."

There was no discussion about which path Jenni would choose. Her parents didn't think of it as a clear life or death decision, and Jenni may not have, either. They believed that since the tumors had already started to shrink earlier, she had a strong chance of carrying the baby and then returning to treatment after he was born.

"I guess we were just hoping that after she had the baby, she could go back on the chemotherapy and get better," her mother said.

Jenni and Nathan named the baby Chad Michael, after their dads. Nathan has legal custody of the child, who is primarily cared for by Nathan's mother, Alexia Wittman, 51.

"Nathan will raise him," she said. She brings the baby to Jenni's house to visit her family whenever they ask.

Jenni didn't show regret for her decision, not in the final weeks of her pregnancy as she grew weaker, and not when she started to lose her vision as the cancer took its course, her family said.

Jenni's last words were about her son as he was placed beside her a final time, her father said. As she felt for the baby, she said: "I can kind of see him."

Pandemic stress is here to stay

What new colon cancer screening guidelines mean to you

Screening for colorectal cancer is now recommended for all people, beginning at age 45 rather than 50. Here's a look at the updated guidelines.

UNMC is recruiting volunteers as part of a clinical trial to test a drug that someone with COVID could take soon after symptoms emerge to head off the worst of the illness.

While more than a dozen states have topped President Joe Biden's 70% COVID-19 vaccination goal, Nebraska isn't quite there yet.

With temperatures rising around the globe due to climate change, wildfires have only expanded in size and hazard, raising widespread concerns over the impacts of smoke.

Nervous about resuming activities? How to manage COVID transition anxiety

With COVID-19 restrictions lifted, some are hesitant to do things they had looked forward to doing post-vaccine. It's called COVID transition anxiety.

Water doesn’t have to be boring. There are plenty of ways to help the whole family to stay hydrated throughout the day.

The "No PFAS in Cosmetics Act" was introduced after a study found high levels of a marker for toxic PFAS substances in makeup products.

Jenni Lake's family, from left, father Mike Lake, sister Kaisee Lake, boyfriend Nathan Wittman, mother Diana Phillip with Jenni's newborn son Chad Michael Lake Wittman, and sister Ashley Lake pose for a portrait in Pocatello, Idaho. Jenni Lake, who decided against treatment for tumors on her brain and spine so she could carry the baby, died of cancer on Nov. 21, 2011, 12 days after giving birth to Chad.

Nathan Wittman, 19, holds a photo of Jenni Lake, who died of cancer shortly after giving birth to their son, Chad Michael Lake Wittman, at the family's home in Pocatello, Idaho.