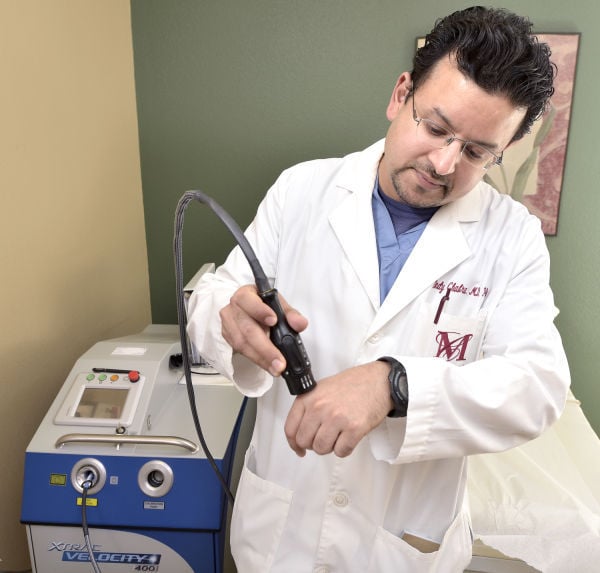 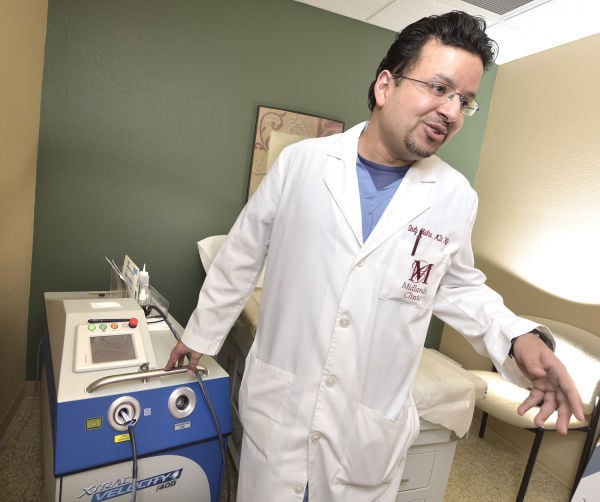 SIOUX CITY | A renaissance in psoriasis treatment is underway.

Topical creams, oral medications and powerful injectable biologic drugs are available to help manage the condition. Now add laser treatment to the growing list of options to rid skin of those red, itchy patches that affect about 75 million people in the United States.

Psoriasis is an autoimmune disease that causes the body's immune system to attack the scalp, skin and nails. It can also cause irreversible stiffness and swelling around the joints and lead to increased risk of heart attack and stroke.

"(Psoriatic arthritis) is highly under-diagnosed, especially in the Midwest," Chabra said. "We have a lot of orthopedic surgeons but we only have one rheumatologist, so patients are getting joint replacements oftentimes when there's psoriatic arthritis which should just be treated."

How does Chabra decide which treatment a patient should receive?

It depends on the location of the psoriasis and the amount of body surface involved, he said.

"Despite biologics, sometimes there are certain areas which are stubborn -- like the scalp, the elbows and the knees," Chabra said. "The laser works well."

The XTRAC system emits a focused beam of ultraviolet light that Chabra said suppresses an overactive immune system. He turns it on and adjusts its settings with the press of a button based on the patient's skin type. He holds the laser over the area of skin that's affected and then fires it.

"Depending on how thick their psoriasis is -- the patch or plaque -- based on their skin type we start with an energy setting," he said.

Patients come to his office two to three times a week for treatments that last five to 10 minutes. Chabra said patients don't feel or smell anything during treatment. A beeping noise sounds when the laser is fired.

"It's not painful. You really don't feel anything," he said. "After treatment, they may have some redness at the area, which is what we want."

After eight to 10 treatments, Chabra said patients start to notice their psoriasis plaques are getting thinner. Clear skin usually is achieved in 15 to 20 treatments, he said. The effect lasts for three to four months.

"They come in with bad skin and we get it better," he said. "Hopefully then they're just using the topical cream unless they have psoriatic arthritis."

Chabra is also using the laser to treat vitiligo, a skin disease which plagued singer Michael Jackson, which causes the skin to lose its color in blotches.

Physicians don't really know what causes the melanocytes -- cells that give the skin its pigment -- to disappear, Chabra said.

"We think it's an autoimmune disease where melanocytes are getting destroyed," he said. "It's quite common. One percent of kids have vitiligo. Vitiligo can be a very psychologically bothersome condition, especially the darker-skinned you are."

Before XTRAC came along, Chabra said there were no good treatments for vitiligo. He said some people with the condition chose to bleach their skin.

During treatment, Chabra focuses the laser only on the affected areas. He fires the laser through a stencil to make sure only the light patches of skin are impacted.

"For someone who's darker skinned, we start with lower settings," he said. "We don't want their normal skin to absorb the light."

Over time, he said repigmentation occurs.

Most insurance companies cover XTRAC treatments for psoriasis and vitiligo, which Chabra said cost about $200 per treatment. More than 50 patients have received the laser therapy to treat both conditions, he said.

"It's not just the laser. We pick the best treatment for the patient irrespective of what we have," he said.

SYMPTOMS: Chronic raised, reddish patches of skin called plaques. These itchy patches can appear anywhere but are most often found on the knees, elbows, lower back and scalp. Psoriasis can also cause stiffness and swelling around the joints.

CAUSE: This autoimmune disease leads the body's immune system to attack the scalp, skin and nails. The exact cause is unknown. Scientists believe psoriasis, which isn't contagious, may be inherited.

SYMPTOMS: Vitiligo is an incurable disease in which the pigment cells of the skin, melanocytes, are destroyed in certain areas leaving light patches of skin.

CAUSE: No exact cause is known. Doctors believe it may be an autoimmune disease.

TREATMENT: Bleaching, cover up with dyes or makeup, laser therapy.

Threats to your skin abound on, in and around bodies of water

Whether you're planning to cruise the Iowa Great Lakes this summer in a powerboat, cast your line in the Missouri River or surf the ocean waters on a beach vacation, there are some health hazards you need to be aware of to protect your skin.

Indy Chabra's patients often think the red, itchy rashes on their skin are related to something they ate. They don't usually suspect that the …