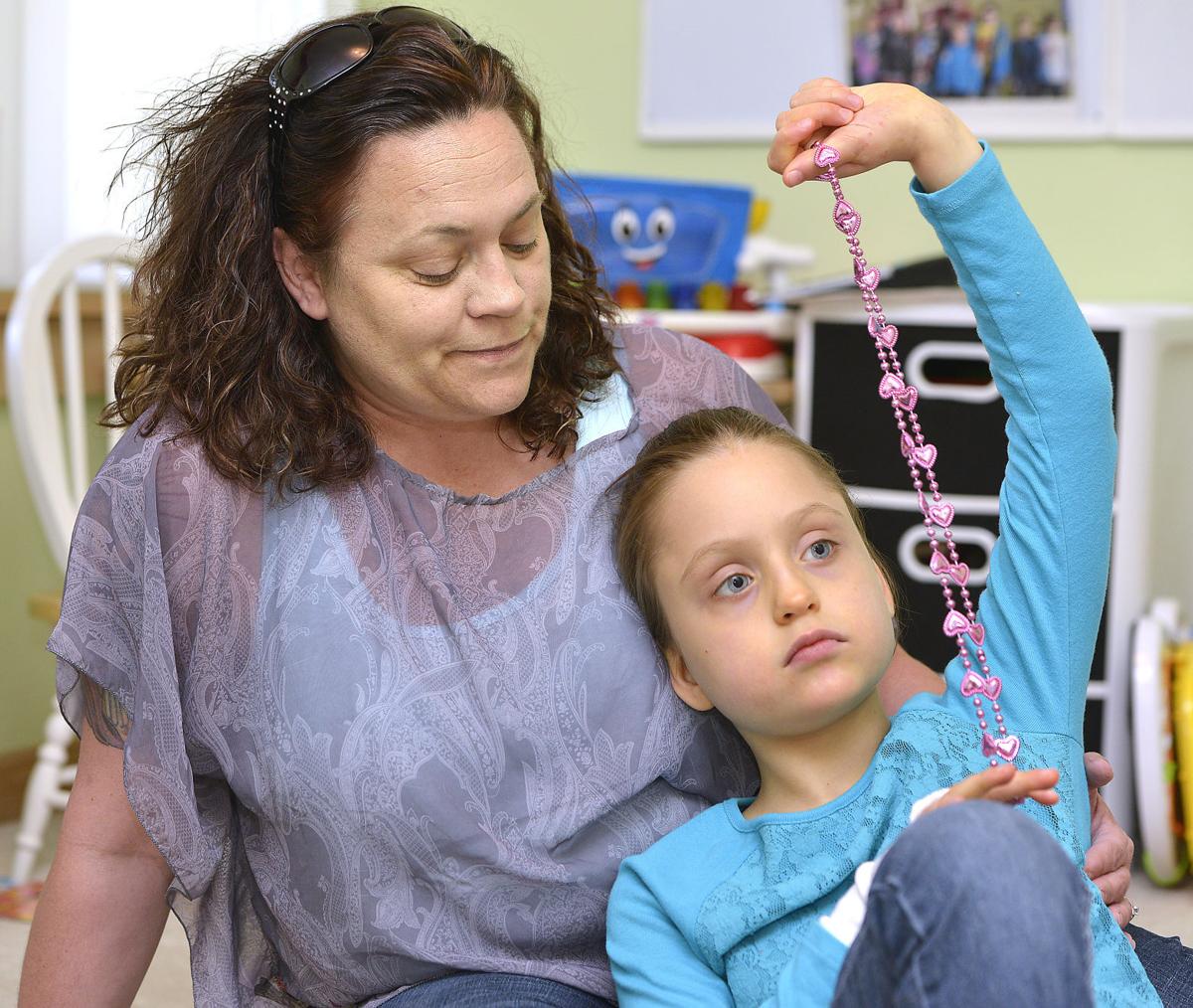 Paige Crawford plays with a beaded necklace while sitting with her mother, Kerry Hildring, at their Sioux City home. "We don't leave the house without a beaded necklace. We have tons," Hildring said. 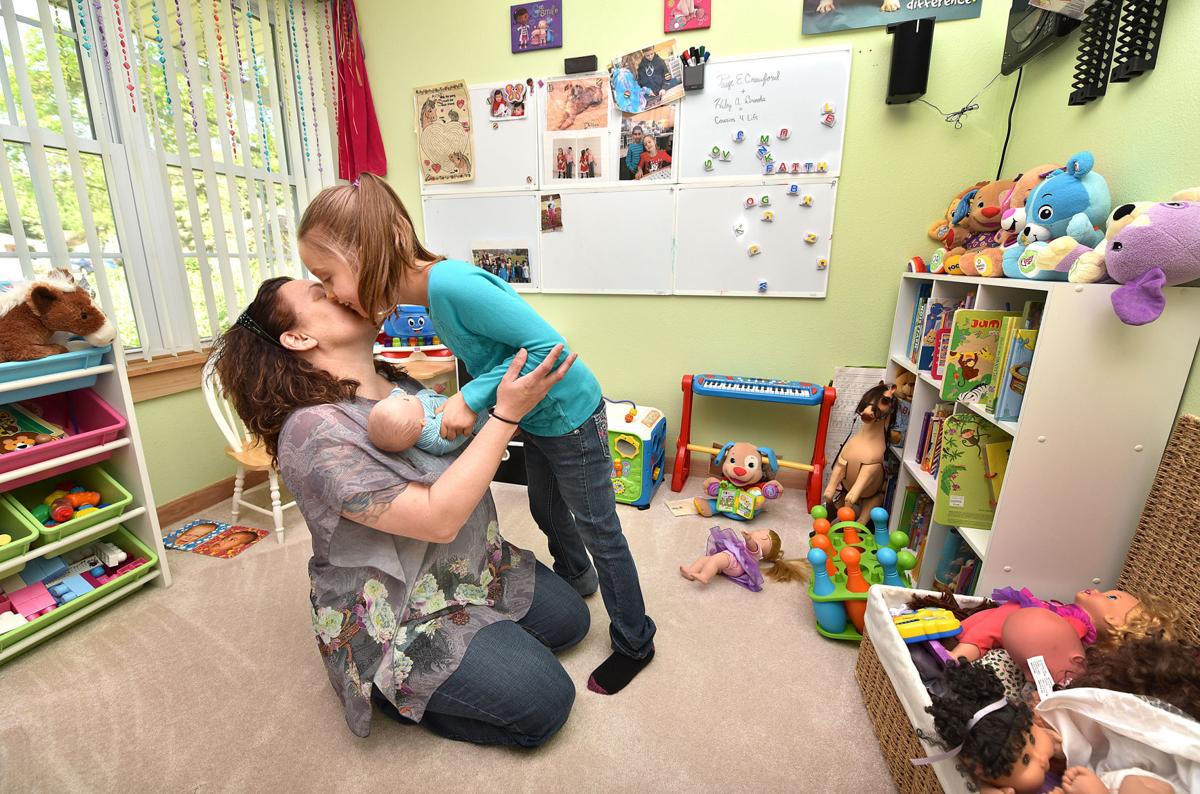 Paige Crawford rubs her head against her mother, Kerry Hildring, at their Sioux City home. Hildring said this is how Paige, who is nonverbal, shows affection. The 8-year-old was diagnosed with PURA Syndrome, a rare genetic disorder, in March. 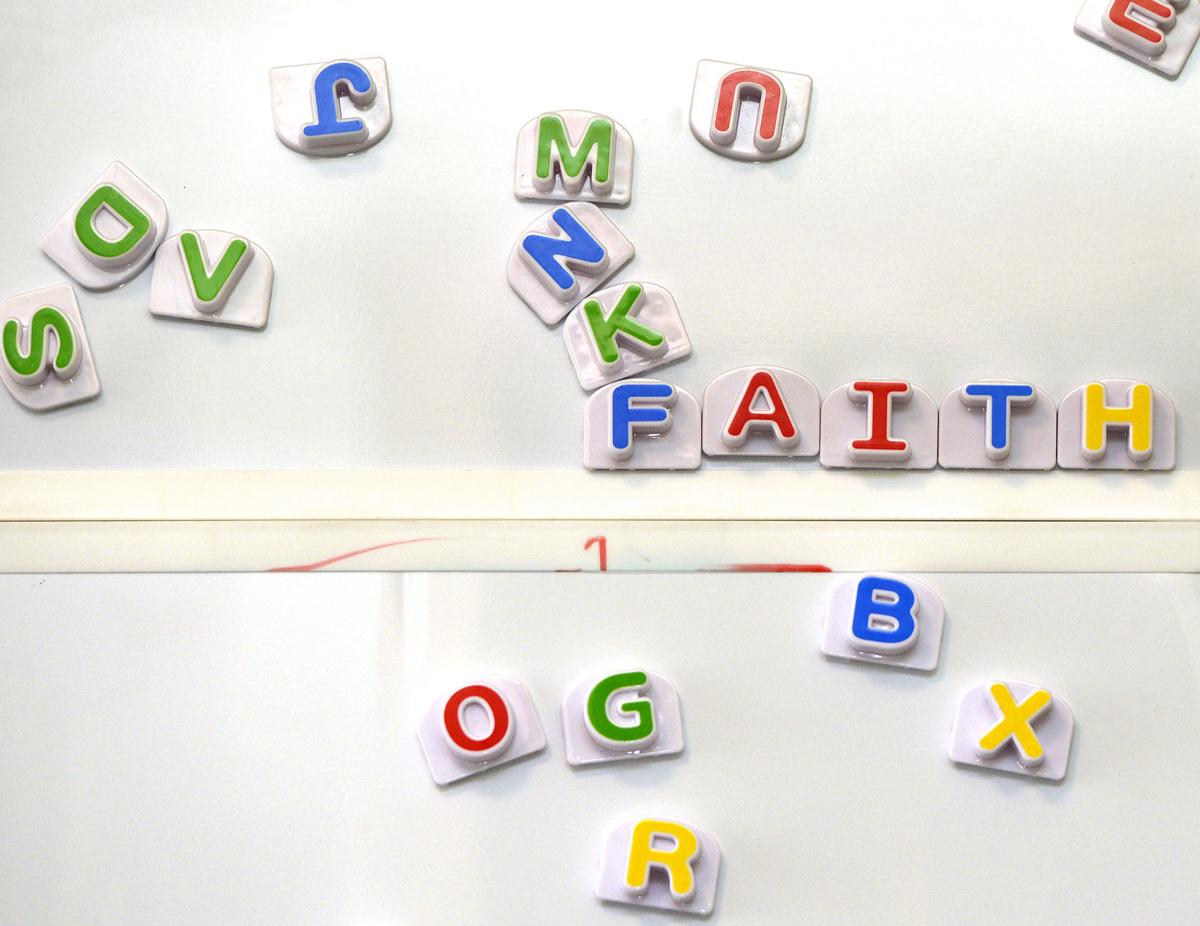 Letters form the word "faith" on a wall in Paige Crawford's playroom. The 8-year-old Sioux City girl was diagnosed with PURA Syndrome, a rare genetic condition, in March.

SIOUX CITY | Surrounded by baskets brimming with stuffed animals and dolls, Paige Crawford fixated on a strand of shiny pink beads as she sat cross-legged on the floor of her light green-painted playroom in her Northside home.

The 8-year-old cooed as she fidgeted with the necklace and gently moved her head from side to side, tossing her dark blond ponytail. A slight smile briefly washed across her face.

Paige has been fascinated by necklaces ever since she started reaching for objects around age 1. Her first toy was a bulky, multi-colored beaded necklace.

Before Paige developed muscle control, her mom, Kerry Hildring, said she would lie on her back motionless like a dissected frog with her hips retracted, her arms at her sides and her head turned.

"When laying on her back, she started reaching for it," Hildring said of the toy necklace.

At age 3, shortly after Paige entered preschool at Unity Elementary School, she rolled over.

At age 4, Paige was pulling herself up to stand.

At age 5, she discovered she could walk -- a seemingly inconceivable feat for a child doctors said early on would remain in a vegetative state for the rest of her life.

"She's been on the move ever since," Hildring said. "She's laid down for too many years, so now she's up and moving and getting into everything."

Although Paige now walks short distances with an unsteady gait, she can't talk and the food she eats must be pureed. Her body can't regulate temperature either. Even in the summertime, Paige wears footed pajamas and sleeps with a space heater in her room.

A few months ago, Paige started having seizure-like episodes up to eight times a day. This new symptom led doctors to finally diagnose her with PURA Syndrome, a genetic condition that was first described in medical literature in 2014. Only 53 people worldwide are known to have it -- Paige was the 51st to be diagnosed.

Paige was born Nov. 13, 2007, at a Sioux City hospital. She seemed healthy until her blood sugar levels plummeted about an hour after birth.

"She was crying, kicking and moving. Then, within an hour she became very still and quiet," Hildring recalled. "They took her out and told me they would bring her right back to me and they never did."

Doctors performed ultrasounds, MRIs and blood work on baby Paige. They couldn't figure out what was wrong with her. Hildring said caffeine kept her daughter alive in an incubator in the neonatal intensive care unit.

Three and a half weeks later, Paige was transferred to an Omaha hospital. Before she left, medical staff told Hildring to give Paige a kiss goodbye because she might not survive the trip.

In Omaha, Paige saw an endocrinologist and a geneticist who ordered a slew of tests, which all came back normal. A week later, Paige was discharged with a heart and lung monitor and no answers.

"They pretty much said, 'What you see is what you get, and she'll never amount to anything else,'" Hildring said.

Hildring, a special education teacher, was determined to help her daughter. Therapists came to her home weekly to give Paige physical, occupational and speech therapy. Hildring believed one day "something would spark" in her daughter.

At age 1, Hildring noticed Paige was having problems breathing. She took her to see an allergist who found that Paige has an anaphylactic reaction to egg, a product contained in most baby foods.

"As soon as I took her off of the egg she started developing muscle control. She was able to actually move her head and move her arms a little bit and stick out her tongue," Hildring said. "She became a bit more coherent."

Paige communicates by making humming noises and pressing talk blocks scattered throughout the house with her hand to indicate she's hungry, thirsty or tired. When she's mad, she claps her hands. She greets people by leaning her body into them.

"Sometimes, if she likes you more than others, it's a constant tug of war thing that she'll play with you," Hildring said.

Hildring estimates Paige has undergone more than 1,700 medical tests in her short life.

When the seizures surfaced, Paige saw a neurologist at Sanford Children's Hospital in Sioux Falls, who ordered whole exome sequencing, one of the most extensive genetic tests available.

Blood samples from Paige, her mom and her dad were collected to analyze their chromosomes -- threadlike structures that contain genetic information -- for mutations. Four months later, on March 30, Paige was diagnosed with PURA Syndrome.

According to the PURA Syndrome Foundation, the genetic condition occurs when one of two copies of the PURA gene, located on chromosome 5, doesn't function normally due to a spelling mistake in the gene or by loss of one copy of the gene -- a deletion.

"She has 101 genes that are affected and they're missing the A and the C, which is unique, because most of the kiddos who have PURA Syndrome are actually missing the Gs and the Ts," Hildring explained. "Now, we say it's PURA Syndrome with a twist of Paige because the fact of her being the only one with A and C deletions."

Next month, Hildring will attend a PURA Syndrome conference in London, where pediatric neurologists and geneticists will speak. In July, her family will travel to Texas for a barbecue for people with the genetic condition. Individuals with PURA Syndrome have been identified in the United Kingdom, Australia, Israel, Brazil, Spain, the Netherlands, France, Singapore, Hong Kong and Canada in addition to the United States.

Hildring doesn't know what the future holds for her daughter. She said the oldest known person with PURA Syndrome is a 27-year-old woman. A few children diagnosed with PURA Syndrome have already died from respiratory complications and seizures, she said.

Paige seems to be beating the odds thus far.

"She's our miracle, so we just keep going every single day and push forward," Hildring said. "She's determined not to let anything hold her back."

The most common symptoms of PURA Syndrome reported by parents include:

MORE: Cost is $5. Children 2 and under are free. Meal includes sauce (with or without meat), bread sticks, salad, drink and dessert. Donations can also be made at U.S. Bank or via Paige's GoFundMe account at gofundme.com/6tzgyjf8.

Isaac Brown felt no pain when he crunched a glass bulb from a nightlight in his mouth, pressed his hand against a hot stove top burner or pluc…

Norah Treiber was born with her arms tightly locked against her tiny body.

When Zachary Darrow came into the world doctors didn't expect him to live past the age of six months.

SIOUX CITY | A giraffe with multi-colored spots peeks out from behind a tree trunk to lick a Bomb Pop.

Paige Crawford plays with a beaded necklace while sitting with her mother, Kerry Hildring, at their Sioux City home. "We don't leave the house without a beaded necklace. We have tons," Hildring said.

Paige Crawford rubs her head against her mother, Kerry Hildring, at their Sioux City home. Hildring said this is how Paige, who is nonverbal, shows affection. The 8-year-old was diagnosed with PURA Syndrome, a rare genetic disorder, in March.

Letters form the word "faith" on a wall in Paige Crawford's playroom. The 8-year-old Sioux City girl was diagnosed with PURA Syndrome, a rare genetic condition, in March.