Diana Ignaceo answers her door on a sweltering August morning, not expecting to see firsthand why South Omaha has increased its vaccination rate more than almost anywhere else in Nebraska this summer.

Mary McConnaughey and Eddie Nuñez are standing on her front steps.

Nuñez tells her in Spanish that they are from One World, the nearby health center, and they are going door-to-door to talk to residents in her largely Hispanic 25th Street neighborhood about the COVID-19 vaccine.

“Have you been vaccinated?” he asks. She hasn’t.

Would you like to be? We have a vaccine for you right here, he says, pointing to a refrigerated bag on McConnaughey’s shoulder.

I think I want the vaccine, Ignaceo says. But my children say it’s more dangerous than the virus, she says, repeating a false claim.

One World has made vaccination as easy and omnipresent as possible to the residents in three South Omaha ZIP codes. It has invested time, money, creativity and sweat equity to convince a sizable chunk of residents, many of them dubious and some downright hostile, to get vaccinated.

That is why the One World employees stay put on Ignaceo’s front steps. It’s why McConnaughey offers a solution as Ignaceo starts to punch numbers into her cell phone.

Does your daughter speak English? Can I speak to her, too?

In some places, such as South Omaha, this is happening widely. And working.

Since mid-May, the area served by One World has moved the needle more on vaccinations than almost anywhere else in Nebraska, according to data released by the Douglas County Health Department and the Nebraska Department of Health and Human Services.

More than one of every eight residents in the area One World serves were newly vaccinated between May 15 and Aug. 15.

“We simply weren’t going to sit behind the scenes and wait for people to come to us,” says Jennifer Mayhew, One World’s director of operations. “Not when we can be proactive and do something to prevent this loss of life.”

In other parts of Nebraska, the summer push hasn’t been nearly as effective.

“There is zero question that we need to be out in the community engaging more, doing even more,” says Dr. Andrea Jones, a family medicine physician at Nebraska Medicine who has co-directed months of vaccine outreach. “We have to do that until we get these vaccination numbers where we need them to be.”

One World can teach the rest of the state that success takes money and manpower, follow-up and follow-through. It takes a population willing to listen, and skilled outreach specialists who know how to listen, too.

On a recent Saturday, One World set up a vaccine pop-up clinic in front of Chiltepes, a popular Guatemalan restaurant.

More than a dozen people, many Guatemalan American, show up soon after the pop-up clinic opens at noon.

Most UNL students, faculty report being vaccinated against COVID

When the number of walk-ins slows, two One World outreach specialists leave their post on foot, turn the corner and wade onto South 24th Street. They begin to strike up conversations with every person they pass.

As the outreach employees talk to another person, and another, several truths become clear: Most of the people they encounter already know One World. They have received care there. The community health center has built-in trust they can leverage to get people vaccinated.

Another truth: These outreach employees aren’t shy. They have been trained to speak plainly. They know how to listen and how to gently correct misinformation.

This type of successful outreach seems unthinkable in other parts of Nebraska, where a lack of resources makes the process more difficult.

The Panhandle Health District is a sprawling 11-county, 15,000-square-mile district in western Nebraska. One of every 421 Panhandle residents has died of COVID-19 during the pandemic, making the virus far deadlier in that region than it is nationally.

Yet, just more than a third of the Panhandle’s residents are fully vaccinated. It’s one of the least-vaccinated health districts in Nebraska.

Doane campaign urging communities to have 'Faith in the Vaccine'

“They will put a chip in your body. Once you have a shot you become magnetized. Every story you can think of, I have heard it,” says Kim Engel, director of the Panhandle Public Health District. The misinformation “is coming at people nonstop on social media, and it’s negative against vaccines, and that’s all they are hearing.”

It hasn’t had the intended effect.

Between May 15 and Aug. 15, 7.4% of Panhandle residents got vaccinated. That’s roughly half the percentage of two South Omaha ZIP codes in that same time frame.

Part of the problem is staffing. Engel’s health district has only a half-dozen employees working full-time on COVID-19, duties that include contact tracing, manning a 24-hour hotline and distributing vaccines to area hospitals. Her district is huge — it’s a three-hour drive from one corner to the other.

This difference between the Panhandle and South Omaha may also be driven by demographics. National polling shows that many white, rural conservatives who remain unvaccinated are staunchly opposed to vaccination, while many unvaccinated Black and Hispanic Americans report they are still open to the idea.

Federal and state money can help. The Panhandle Health District will soon get two new employees who will do vaccination outreach after receiving a state grant, Engel says.

Government funding also helped One World hire extra outreach staff and start a program that allows residents to schedule at-home vaccination appointments. It’s buying things such as the refrigerated bag that EMT Mary McConnaughey has flung over her shoulder as she does vaccine outreach in South Omaha.

Back on Ignaceo’s front steps, McConnaughey has taken Ignaceo’s cell phone and is speaking to her daughter. She answers questions and tries to combat false information.

She tells the daughter — and Ignaceo, also listening to the conversation — that the delta variant is filling up hospitals, and more than 95% of the people hospitalized aren’t vaccinated.

McConnaughey hangs up the phone. She has failed to convince the daughter.

But as she hands the cell phone back, Ignaceo nods. She’s ready to get her shot.

She sits down on the front steps and the EMT pokes the Pfizer vaccine into her arm.  McConnaughey talks to her about the side effects, and urges her to stay hydrated in the heat. Then she sits silently with Ignaceo for a few moments, gently stroking her arm and patting her shoulder.

The clock is ticking toward noon. McConnaughey and Nuñez have been on Ignaceo’s front steps for nearly a half-hour.

If you view this one way, they have vaccinated only a single person in this time. They have bailed one cup of water from a giant ship sinking and threatening to capsize.

If you view this another way, they haven’t simply vaccinated one person. They have vaccinated Ignaceo. When she gets her second dose, she will be safe.

McConnaughey groans as she finally gets up from the front steps. She brushes the dust off her medical scrubs and waves goodbye to Ignaceo.

What do we know about booster shots for COVID-19?

When would they be given?

Who would get them?

What about the unvaccinated?

What household items need cleaning everyday and what can wait

How much spending money should parents give their college student?

How much spending money should parents give their college student?

How to perk up when you're in an afternoon slump

How to perk up when you're in an afternoon slump

Guard and Reserve members of the Army have until June 30 to be vaccinated, but active-duty airmen, like those at Offutt, must get the shots by Nov. 2.

School officials, health experts and parents are focused on how to keep kids in school — and protected from the coronavirus. Experts say a significant share of kids suffer lingering symptoms for weeks and months after COVID-19 infections.

'Twindemic' on horizon? 8 things to know about flu shot as COVID-19 still spreads

Medical experts warn the approaching flu season could be severe, renewing fears of a potential "twindemic" with COVID-19. Here's what you should know.

Douglas County has confirmed nine cases of the West Nile virus this year, with eight of them coming this month. All but one of the people who had West Nile was hospitalized, officials said.

Even without ablation, quality of life fine in heart patient

Dear Doctor: I'm 65 years old, and I've been diagnosed with a-fib, and also atrial flutter. It used to come and go, but now it's staying with …

5 unusual headaches: Signs to watch for and what to do

Headaches come in lots of varieties, and some are easily recognizable. But some aren’t as well-known. Here are the causes and solutions for them.

Lincoln hospitals are 'at the breaking point,' Bryan Health says

The surge is not only occurring in Lincoln. The Nebraska Department of Health and Human Services on Wednesday reported 415 active COVID-19 hospitalizations statewide, nearly double the number from a month ago.

Two new robot-assisted surgical systems are helping Methodist Health System physicians go farther into the lungs with the aim of speeding the process of diagnosing and treating lung cancers. 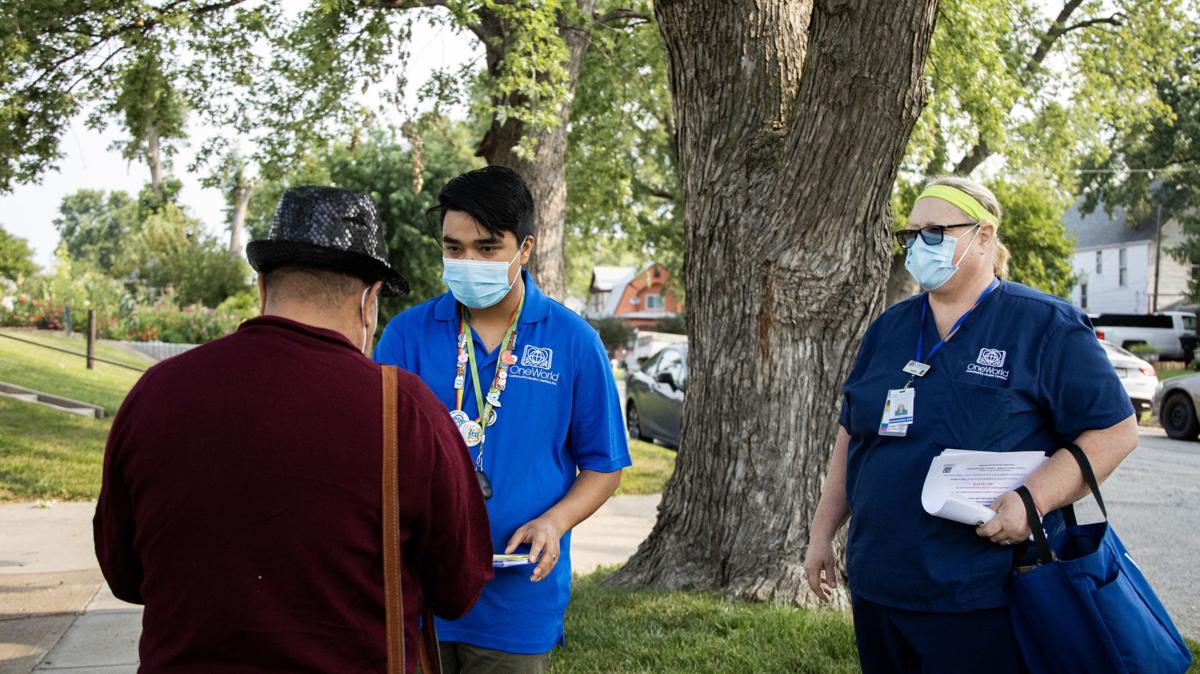 Eddie Nuñez and Mary McConnaughey, employees of One World Community Health Centers, talk to a passerby as they go door-to-door in a South Omaha neighborhood, offering residents the COVID-19 vaccine. 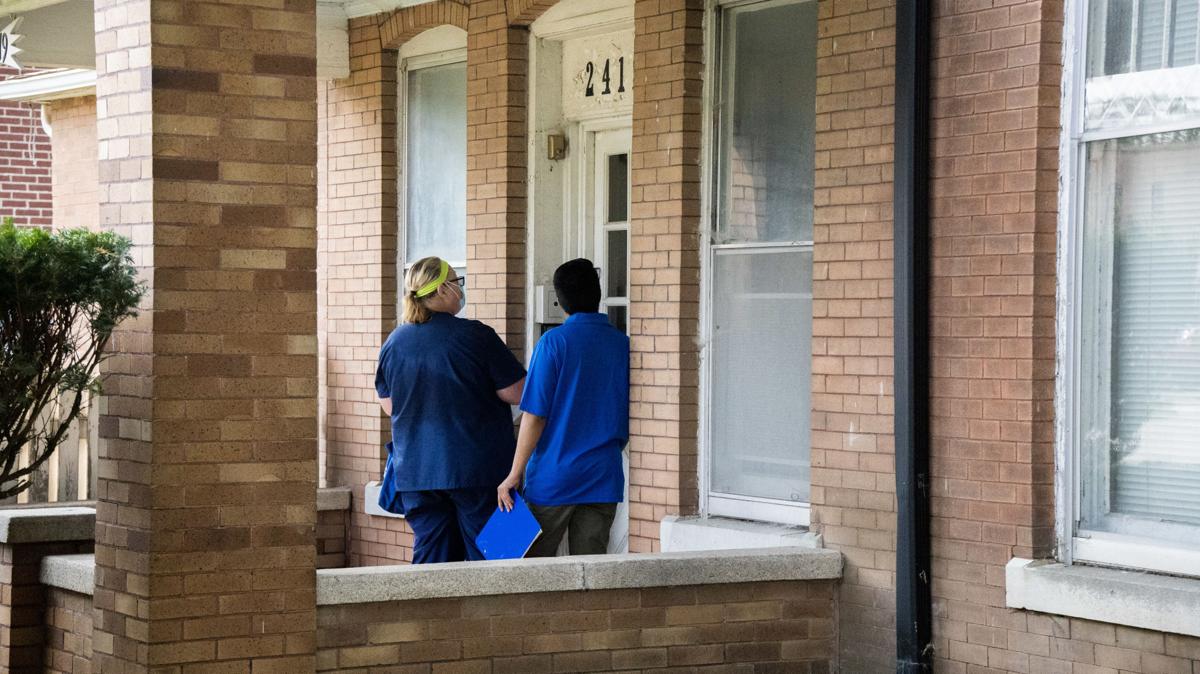 Mary McConnaughey and Eddie Nuñez, One World vaccine outreach employees, knock on a door while walking through a South Omaha neighborhood to offer residents the COVID-19 vaccine. 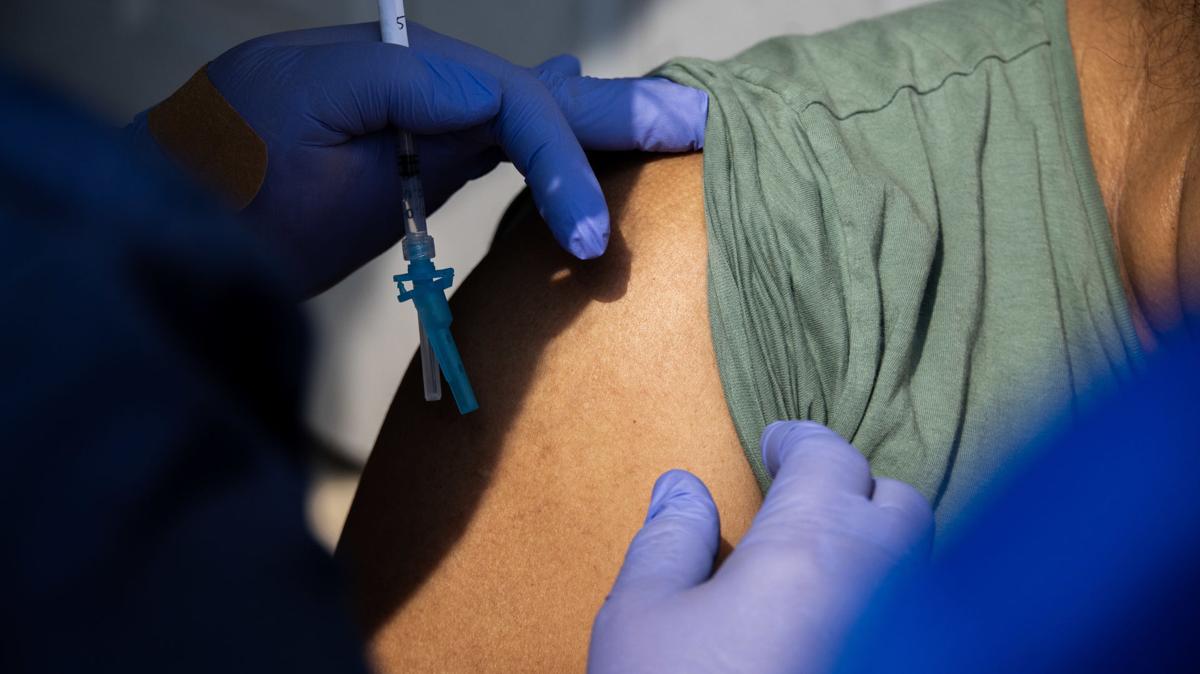 Mary McConnaughey, an EMT and vaccine outreach worker for One World, prepares to give a first dose of the Pfizer vaccine to Diana Ignaceo while Ignaceo sits on her front steps.