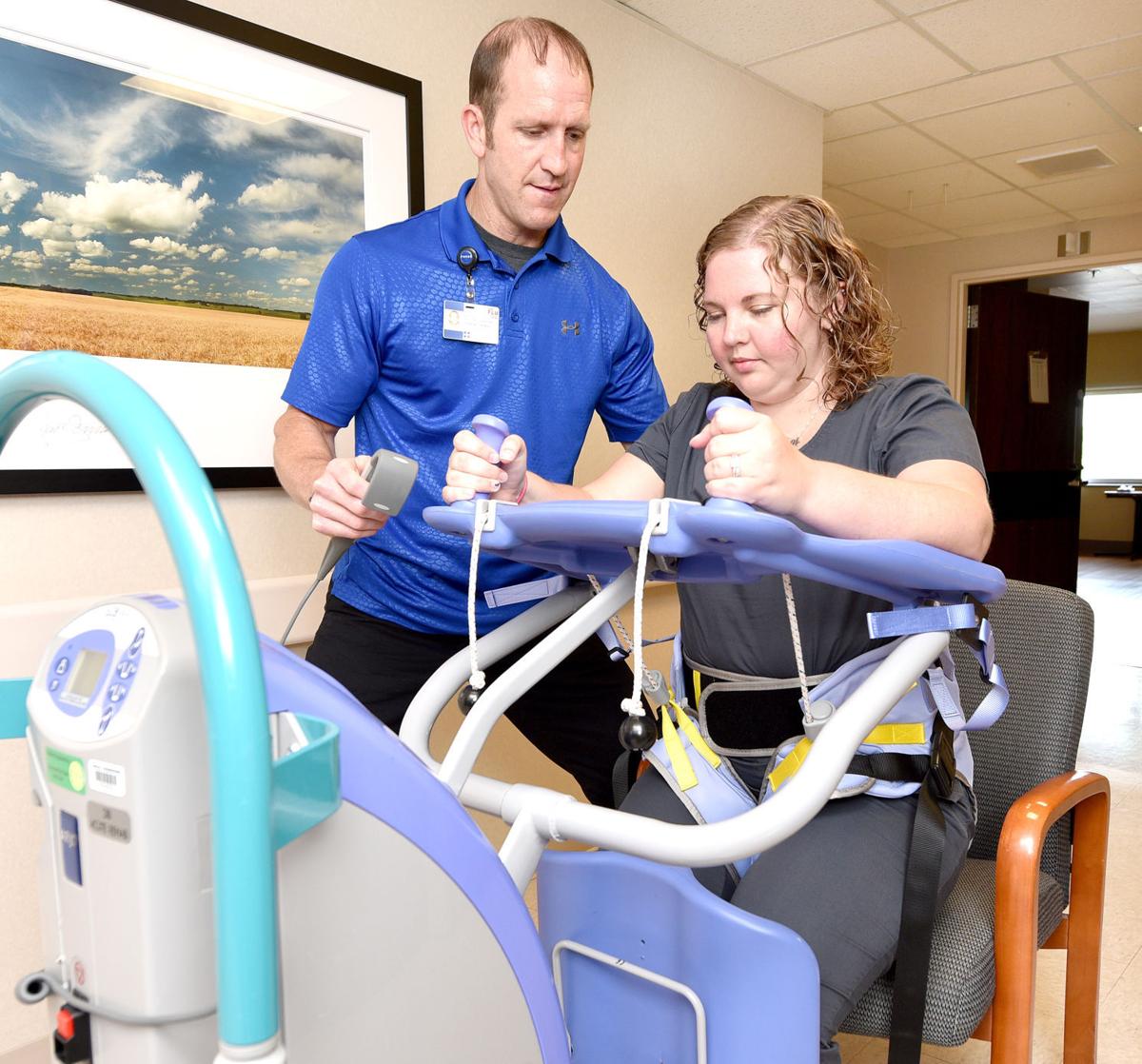 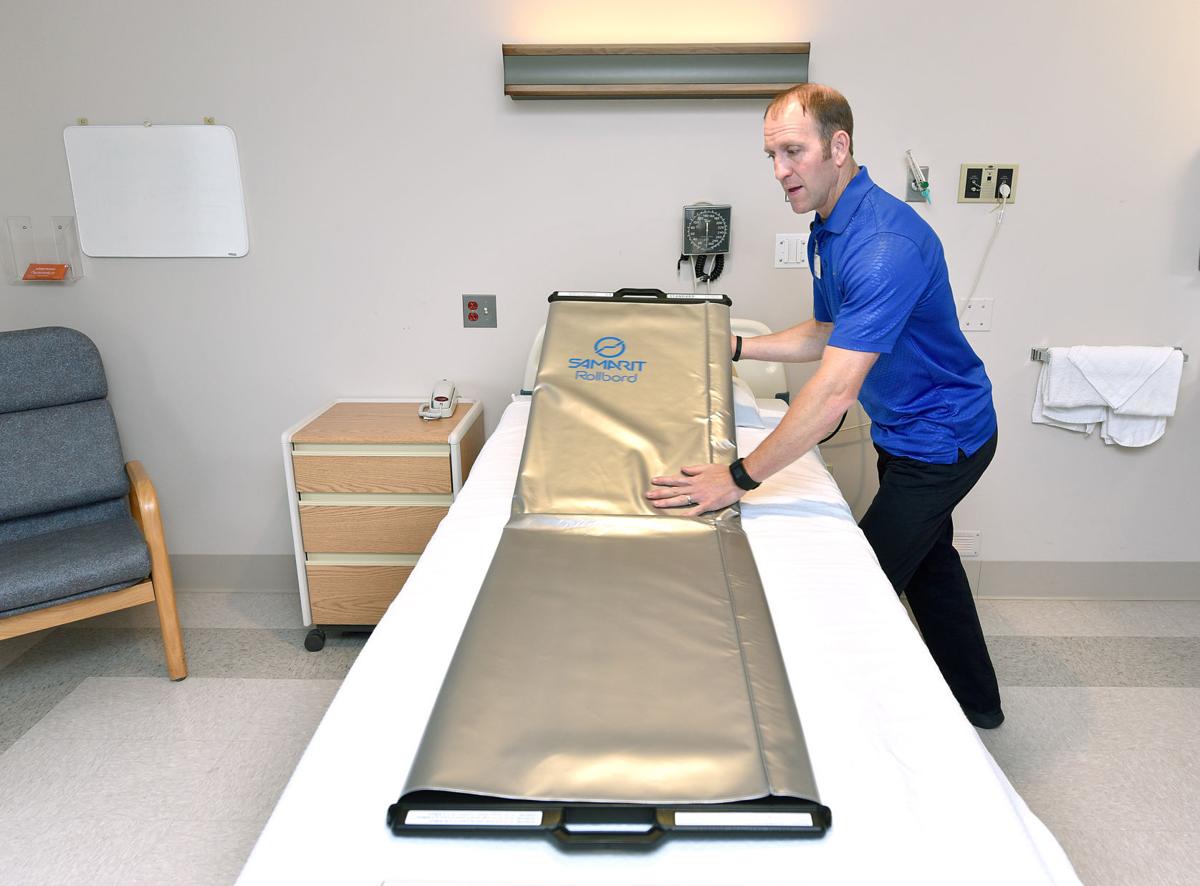 Erik Nieuwenhuis, a physical therapist at UnityPoint Health-St. Luke's, demonstrates how to use a rollboard at the Sioux City hospital. 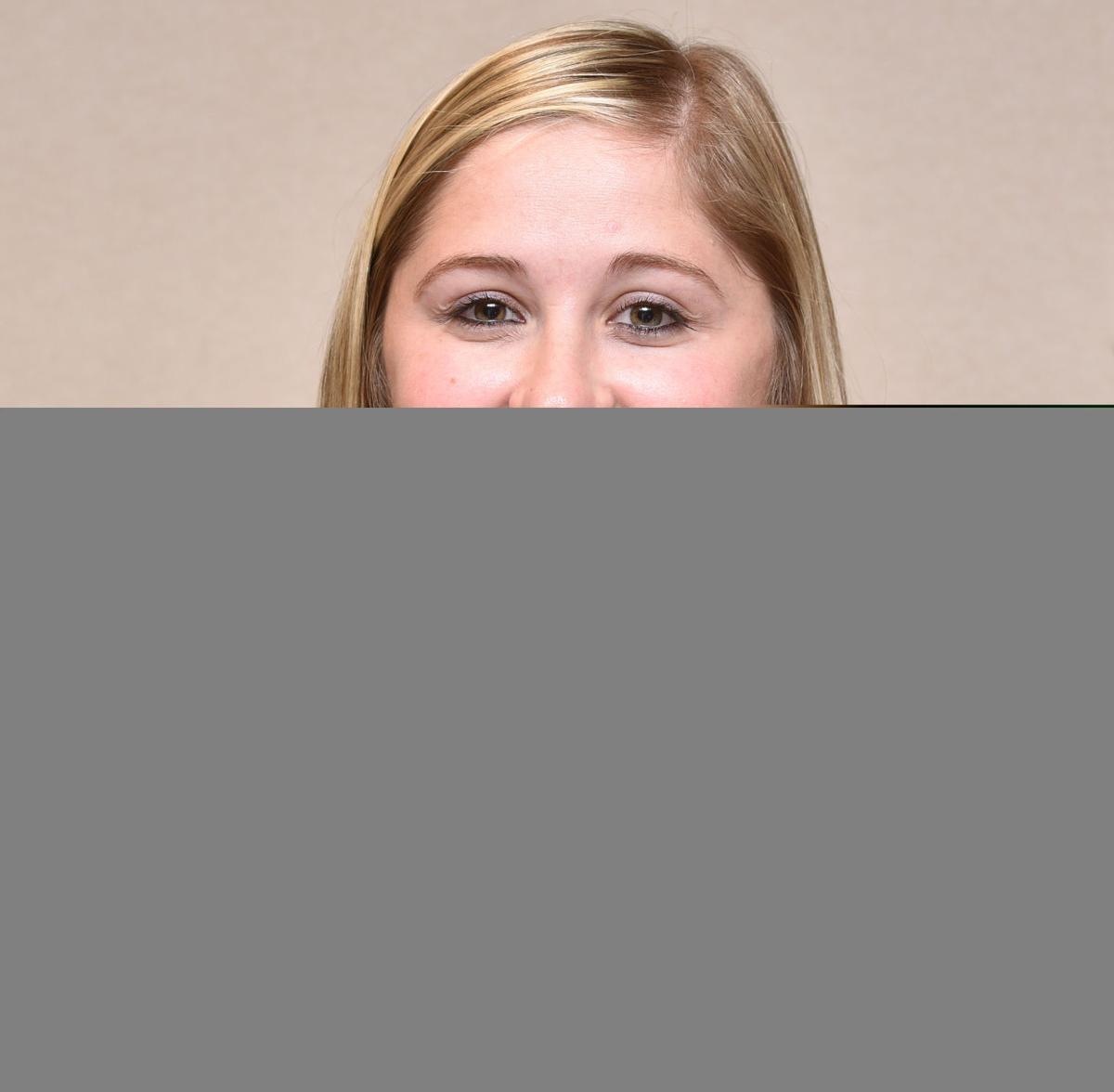 SIOUX CITY | Judy Stanwick noticed something was off with her gait on a Monday in September 2014.

By Wednesday, she could no longer stand.

By Friday, she was paralyzed from the waist down.

Stanwick, 56, was suffering from Guillain-Barre syndrome, a rare and potentially life-threatening condition in which the immune system attacks the nerves causing paralysis.

When Stanwick was hospitalized, she said a male physical therapy assistant was the only one who could lift her to a standing position.

Two years later, the Dakota Dunes woman is using a Sara Plus to walk on a track during out-patient physical therapy at UnityPoint Health-St. Luke's. The powered standing aid, which promotes mobility among patients, is among 80 pieces of new equipment the hospital implemented early this year to safely move patients while lessening the physical strain on nurses, physical therapists and other care employees. The investment was more than $130,000.

Stanwick said she feels secure and confident in the Sara Plus.

"The therapists are young women. I assume it would be dangerous for them to try to get me to walk again because I can't stand yet," she said. "It is the only thing I can use to try and walk."

Musculoskeletal disorders are the main source of injury for health care workers. According to the Bureau of Labor Statistics, health care workers suffer lower back and shoulder injuries at a rate three times that of construction workers.

National Institute for Occupational Safety and Health standards set the maximum amount of a patient's weight that health care workers should manually lift, push or pull at 35 pounds. Even when lifting a leg, therapists, nurses and nurse aides can exceed that safe lifting load.

"With the larger patients we have to use more of our own muscle strength to help assist them to move. It does make it more taxing on ourselves and puts us at greater risk for injuries," said Heather Rush, a physical therapist at St. Luke's. "It's nice to have the new lift equipment because it takes much more stress off of us."

Over the past two years, Mindy Spenner, a physical therapist and manager of therapy services for the hospital, said she's seen an increase in obese patients. Recently, she said staff had to move a patient who weighed close to 600 pounds.

"It's surprising sometimes at how well somebody that is that weight can move on their own, so we try to let them do as much on their own as much as possible," she said. "That helps us determine what piece of equipment would work best for them."

Although more than two-thirds of American adults are considered overweight or obese, few hospitals have adopted safe patient handling programs. According to a report from Public Citizen, a national nonprofit organization, experts from the Oregon Coalition for Healthcare Ergonomics, National Institute for Occupational Safety and Health and Stanford Risk Authority estimate that only 3 to 25 percent of hospitals have such programing.

Faye Tompkins, manager of corporate, employee health and wellness for St. Luke's, said she thinks cost factors into a hospital's willingness to purchase lift equipment, but she said she thinks a lack of statistical data showing that lift equipment is beneficial also plays a role. She said a back injury to one employee could cost $100,000 after surgery and rehab.

"When we first started talking about lift equipment, we had some leaders here that had come from hospitals that purchased lift equipment and it just sat in a closet and nobody ever used it," she said.

"We worked that way until last year, when we got a capital budget approved and we made some really nice purchases. We got quite a few pieces from that capital budget," she said.

Staff were trained on the new equipment in early 2016. Erik Nieuwenhuis, a physical therapist and WorkSmart Ergonomics injury prevention specialist and wellness consultant for St. Luke's, said statistics show these lifting tools in combination with good body mechanics, the use of gait belts, and stretching and employee wellness programs are having a big impact on injury reduction.

In 2001, St. Luke's recorded 75 patient care-related Occupational Safety and Health Administration (OSHA)-reportable injuries, while in 2015, the hospital had just 9. Through June, St. Luke's has had only 1 OSHA-reportable musculoskeletal disorder for patient care employees.

Tompkins said a representative from a lift equipment company used to visit the hospital to provide on-site training for employees once every three months. Putting Nieuwenhuis in charge of the lift equipment, she said, is a huge advantage.

"So many times when I go to different departments now, the equipment's gone. Sometimes it used to be sitting in the storage area, but now it's being used on almost every floor."

Four MaxiMoves replaced older-style Hoyer lifts. Five Sara Pluses, a mechanical sit-to-stand tool, can be used with walking slings to hold patients weighing up to 420 pounds. If a patient's legs give out, Nieuwenhuis said the equipment gives them fall protection.

"They don't fall and hit the ground. They're gonna stay safe; and we don't get hurt. It's a big win-win for both parties in that respect. We never had that before," he said. "We'll be able to safely get people up sooner and quicker."

Also among the lifting equipment are 30 sets of bariatric MaxiSlides, flat sheets with handles for transfers; six bariatric rollboards that slide with patients over 300 pounds; and the Dane WheelChair Mover, which can transport patients weighing up to 550 pounds to different areas of the hospital.

"We've had some staff that have gotten hurt over the years pushing bariatric patients. The wheels have gotten caught or turned and then tweaked a shoulder or tweaked a back. This will prevent these things from happening a lot more," Nieuwenhuis said of the WheelChair Mover.

SIOUX CITY | Tiny white specks that don't fall from the scalp like pieces of lint or dandruff could be head lice.

SIOUX CITY | A giraffe with multi-colored spots peeks out from behind a tree trunk to lick a Bomb Pop.

SIOUX CITY | Mark Brewer had to increase the font size of song lyrics from 16 to 20 so he could read them while playing guitar.

DAKOTA DUNES, S.D. | A silicon balloon designed to help those struggling with diet and exercise shed excess pounds is now available in Siouxland.

PennyWise Episode 39: Easy ways to save money on holiday decorations this year

Erik Nieuwenhuis, a physical therapist at UnityPoint Health-St. Luke's, demonstrates how to use a rollboard at the Sioux City hospital.