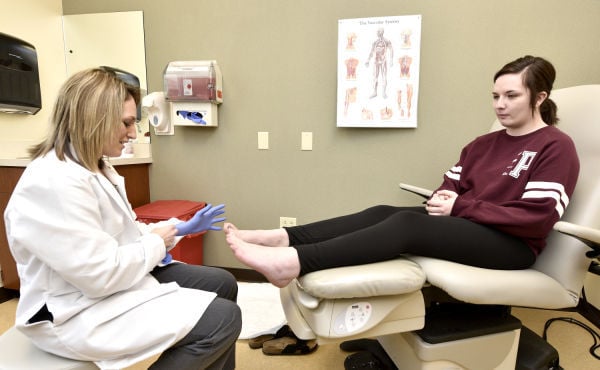 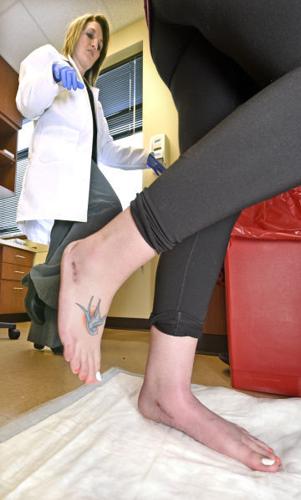 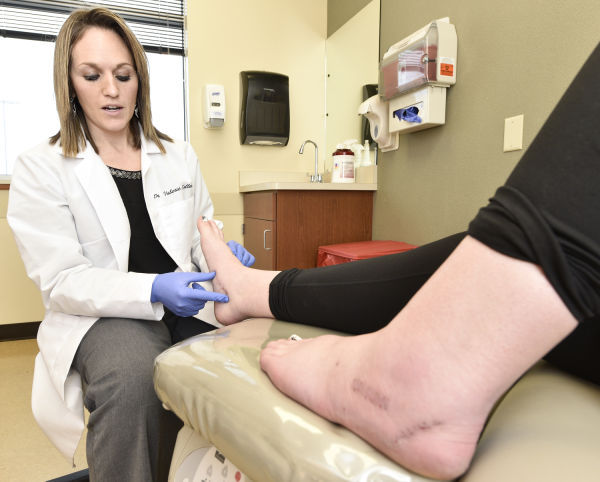 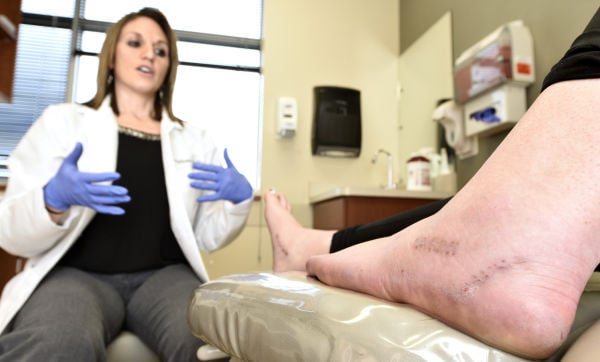 Surgery can help correct flat feet but it isn't always the first choice of action, according to Dr. Valerie Tallerico who operated on Julia Hartnett's feet.

SIOUX CITY | For years, Julia Hartnett struggled with constant soreness in her feet and heels and nagging tightness in her calf muscles.

Hartnett, 19 of Dakota City, tried custom orthotic inserts but they offered her no relief.

"I've always kind of had pain because I played volleyball. It got worse as I got older," she said. "My feet were always sore. I felt like I had old lady feet all the time."

Hartnett suffers from flat feet, a deformity where the arches of the foot collapse. When she stood her feet rolled inward.

"Some people do fine with inserts. Some people they don't fall into that category -- you need to pursue surgery," Tallerico said.

At a recent appointment in Tallerico's office located on UnityPoint Health -- St. Luke's campus, Hartnett slowly lifted her heel while balancing on her right foot. When she switched feet, her left heel proved more difficult to raise, but Tallerico was pleased with her progress.

Hartnett said she's noticed a dramatic improvement since the operation.

"Walking, I've always been kind of sore," she said. "My calves don't tighten up on me. It's easier to do daily activities."

According to Tallerico, 50 to 60 percent of her patients have flat feet.

"You can have a flat foot where the foot just seems smushed down to the ground. Another component of the flat foot is that foot turning out to the side like they're walking like a duck," she explained.

Patients between the ages of 12 and 60 who have exhausted those options, she said, are candidates for flatfoot reconstruction if their feet are flexible and can be moved into a more normal position. Their body weight also plays a role. Tallerico said the surgery, which is done through incisions on the inside of the foot and the ankle, isn't designed for people who are obese.

The first step in flatfoot reconstruction is lengthening a portion of the Achilles tendon, the large tendon at the back of the leg that inserts into the heel and allows you to bend your foot downward. Lengthening the tendon helps increase the ankle's flexibility so Tallerico can move the heel into the correct position. Typically two incisions are made in the heel.

"One bone cut we actually cut through the entire heel and what we do is we basically shift that heel bone over so it's directly beneath the ankle," she said. "Ideally we want the heel to line up with the ankle and we fixate that with a screw."

With the second bone cut, Tallerico is able to insert a bone wedge to shift the foot back into a neutral position.

The last step is harvesting the flexor digitorum, a long tendon used to bend toes two through five, and transferring it into the the bone where the posterior tibial tendon, the main support in the arch of the foot, attaches to. The flexor digitorum, Tallerico said, takes over the role of the posterior tibial tendon, keeping the foot in alignment and supporting its arch.

"The posterior tibial tendon has a lot to do with flat feet," she said. "Most of the time that tendon is so demolished that we actually have to transfer a tendon."

Patients can expect to remain in a cast for six weeks after surgery and then spend another three to four weeks in a walking boot.

"Your goal is to get back in regular shoes in about 10 to 12 weeks," Tallerico said. "You do a little bit of physical therapy to get this tendon stronger."

Hartnett said the soreness she used to experience when walking is gone.

"It's so much easier to do stuff," she said.

Tallerico said Hartnett's feet should stay in alignment, although she said they could flatten a bit as she ages. Even with the procedure, she said Hartnett could still develop arthritis in her feet.

"It will never been as excessive as she was before," Tallerico said of the flatness. "She will probably do very well."

Before moving to Pakistan with her family, Ashley Neils received oral polio drops to protect her from the viral disease that causes paralysis.

Judy Grimsley has always been a little overweight.

SIOUX CITY | Valerie Tallerico likens the ligaments in the ankle to a rubber band.

Watch Now: How much to spend on a wedding present?

Watch Now: How much to spend on a wedding present?

Surgery can help correct flat feet but it isn't always the first choice of action, according to Dr. Valerie Tallerico who operated on Julia Hartnett's feet.