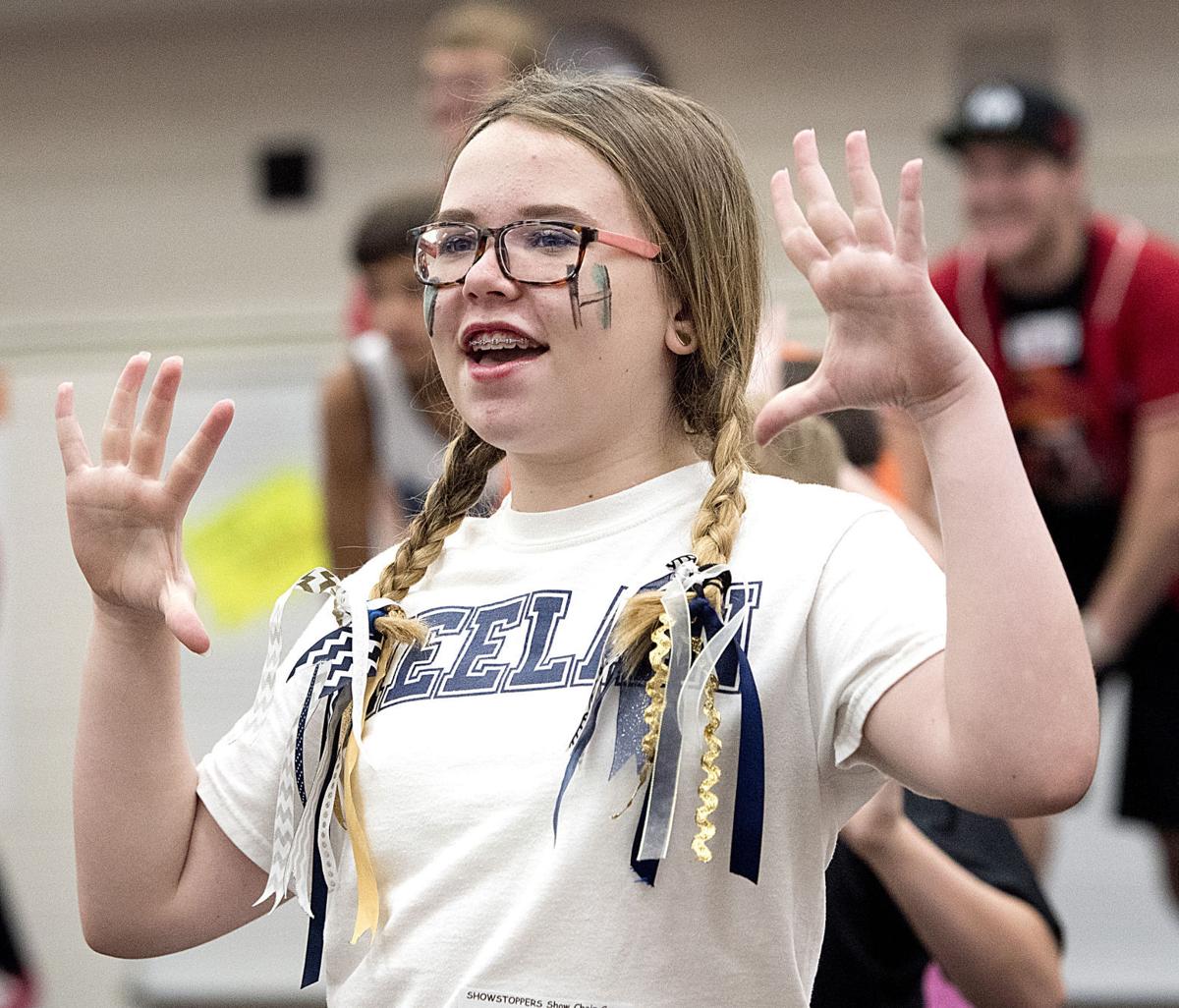 Zoey Vondrak, a Heelan middle school student, practices at a SHOWSTOPPERS show choir camp session held Wednesday at Le Mars Community High School. About 100 students from 22 schools in three states were attending the camp and rehearsing for a show choir performance that was held on Friday. 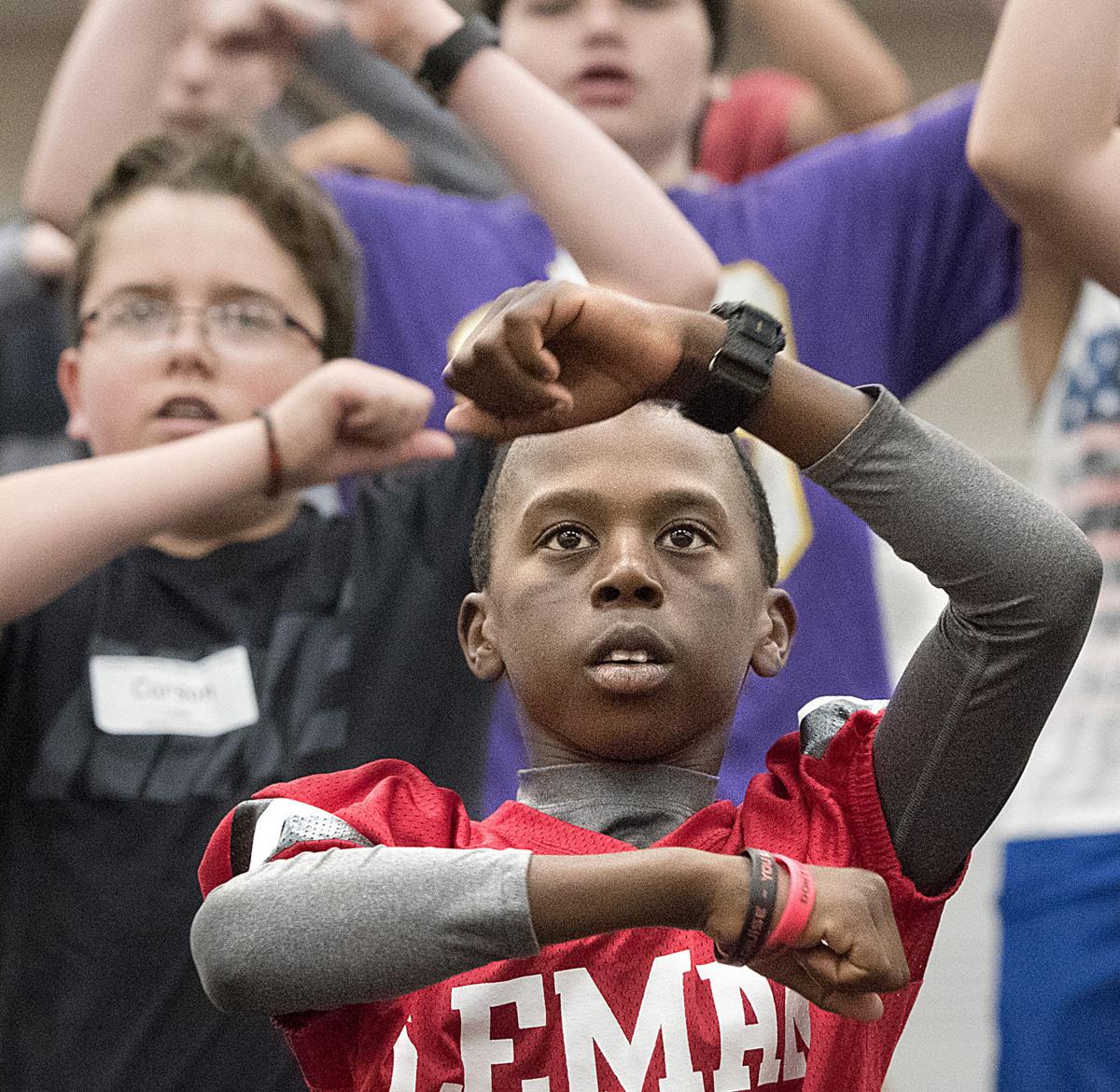 Le Mars Middle School student Aaron Johnson rehearses Wednesday during a weeklong SHOWSTOPPERS show choir camp session held in Le Mars, Iowa. About 100 students from 22 schools and three states practiced production numbers for a Friday night concert, in which a portion of the proceeds will go back to the school's performing arts program. 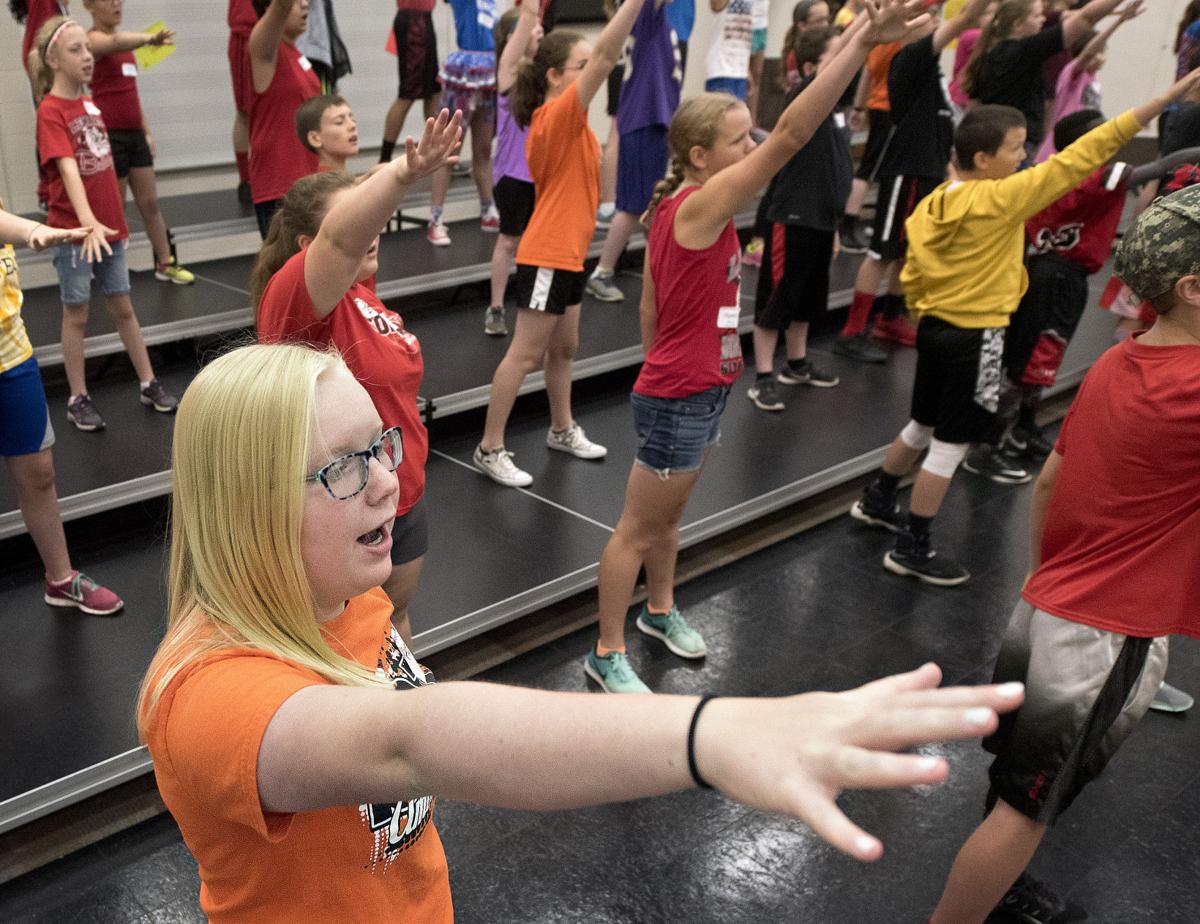 LE MARS, Iowa | Jennifer Toney is in charge of a high-intensity boot camp, where smiles must be toothy and having jazz hands are mandatory.

The Sioux City woman is the director and choreographer of the SHOWSTOPPERS Show Choir Camp, a weeklong performing arts camp that travels to schools across the Midwest every summer.

"Over the course of a week, students will learn the stage presence, the vocal technique and the dance skills needed if they choose to advance to a high school-level show choir," Toney says. "More than that, it's a terrific team building exercise in which kids gain self-confidence as performers and make new friends in the process."

This is definitely true for Isaiah Olson, of Sioux City, who started the week without much advance knowledge of the camp's requirements.

"I got involved with SHOWSTOPPERS through a friend who knew I loved to sing," the North Middle School eighth grader says. "So far, it's been fun and harder than I thought it would be."

Actually, that may be a bit of an understatement.

Isaiah and approximately 45 other sixth through ninth graders are required to rehearse complex production numbers for three hours each morning of the camp.

During the afternoon, 52 third through fifth graders rehearse for about 2 ½ hours each day.

This is all the rehearsal time the budding young performers have before the special concert inside the Le Mars Community Middle School's auditorium on the final night of the camp.

"It may seem like a lot of rehearsal time," Toney said, "but our campers will need every second if they want to have all of their singing and all of their choreography down pat."

Nobody has to worry about Vanessa Koelling messing up lyrics. The Kingsley, Iowa, sixth grader sings when her parents drive her to the SHOWSTOPPERS summer camp.

"That gives me just the right amount of time to prepare," she says. "I love starting my day off by singing."

This is also true for Kemper Bowden, a Le Mars Community Middle School sixth grader, who bikes to summer camp.

"Performing is fun for me," he says. "You get to do things and you get to be things that you aren't in real life."

For instance, Kemper gets the chance to become a zombie for the grand finale.

"Yeah, we'll be doing Michael Jackson's 'Thriller' as part of the concert," he says, previewing the event. "It'll be very scary."

Like Vanessa and like her classmate Kemper, Kaitelin Konz is a veteran of past SHOWSTOPPERS summer camps.

"I've met some of my best friends at these camps," says the Le Mars Community Middle School eighth grader. "It's become a highlight of my summer."

Which is exactly what Toney likes to hear.

"During tough times, schools' fine arts programs are often the first things that are cut from the curriculum," she says. "We need to show how beneficial the performing arts can be for our most gifted students."

That's why a portion of money earned by SHOWSTOPPERS Show Choir Camps is donated back to the music programs of its host schools.

"During SHOWSTOPPERS' six years of summer camps, we have donated nearly $26,000 to music programs for schools in five different states," Toney says. "In the four previous summers we've hosted events in Le Mars, we've given $13,809 for the school."

Which is, indeed, music to the ears of Kemper, who is hoping to come alive by playing an "undead" cast member in SHOWSTOPPERS' big "Thriller" production number.

"Jennifer is always telling us we have to become triple threat performers," he says. "You have to be a good singer and a good dancer but you also have to become a good actor."

During some down time, Vanessa and Kaitelin talk about their favorite pop songs while Kemper and Isaiah bond over music that is much more genre-specific.

The two boys share a mutual affection for heavy metal music from the 1980s.

This is an "a-ha" moment that Kemper needed to share with Toney.

"I've never really though of how a show choir would sound when singing an AC/DC song," she says. "Who knows? It might sound good."

All singing, all dancing, all learning

For more information, go to www.showstoppersshowchoircamp.com

SIOUX CITY | When Laney Nathaniel, 12, became a member of the Siouxland All City Show Choir last year, the East Middle School sixth-grader tho…

Singing the chorus of "On Silver-Tipped Wings," Emma Hawkinson, 14, doesn't mind losing herself in the lyrics.

MARCUS, Iowa | When Mavis Diment died on July 18, 2015, the longtime Marcus resident was remembered as a woman who had an infectious smile, a …

SIOUX CITY | Can you pop and lock your way through Dolly Parton's "Nine to Five?"

SIOUX CITY -- Some teenagers identify with famous athletes while others prefer stars of the silver screen.

SIOUX CITY -- Even though Derek Bergman had only been Camp Hopes camp director for little more than a week, he already felt at home in the fac…

Zoey Vondrak, a Heelan middle school student, practices at a SHOWSTOPPERS show choir camp session held Wednesday at Le Mars Community High School. About 100 students from 22 schools in three states were attending the camp and rehearsing for a show choir performance that was held on Friday.

Le Mars Middle School student Aaron Johnson rehearses Wednesday during a weeklong SHOWSTOPPERS show choir camp session held in Le Mars, Iowa. About 100 students from 22 schools and three states practiced production numbers for a Friday night concert, in which a portion of the proceeds will go back to the school's performing arts program.