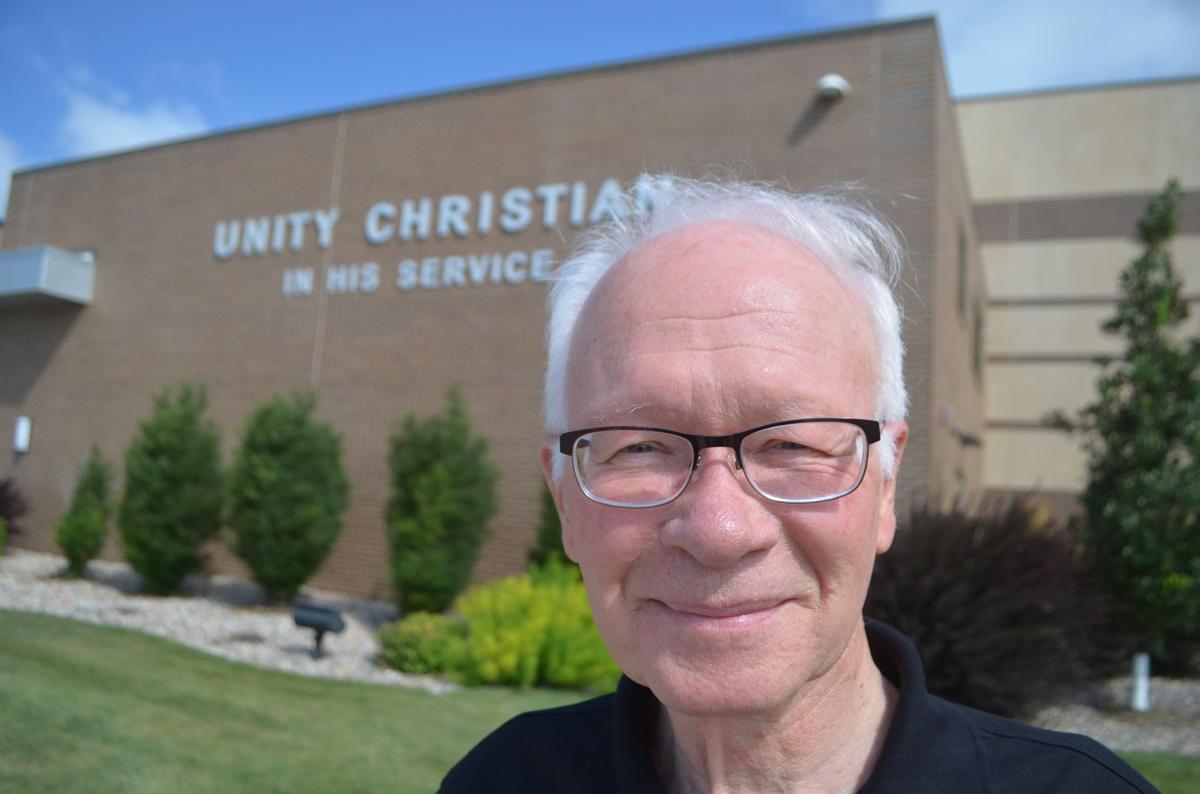 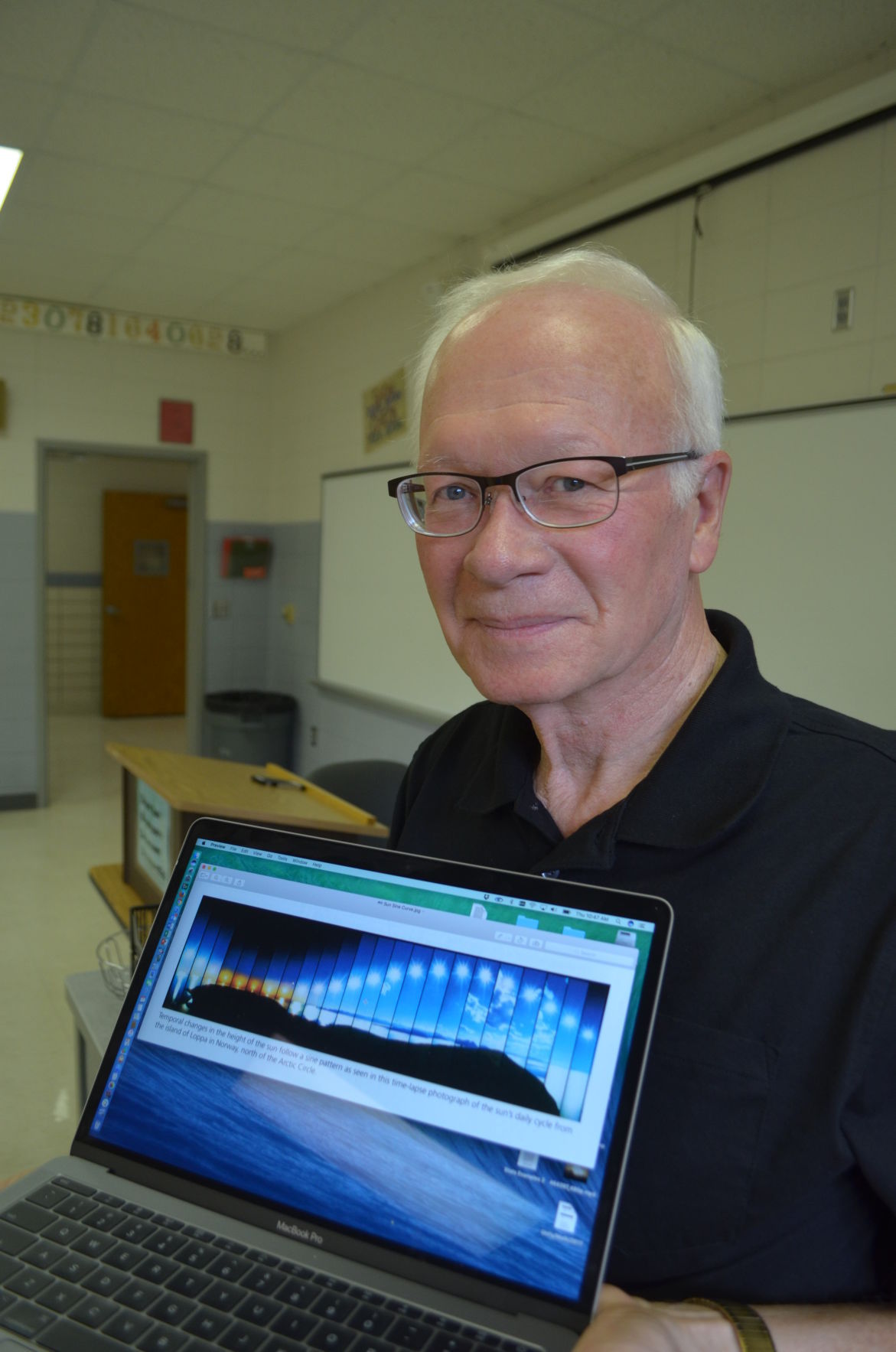 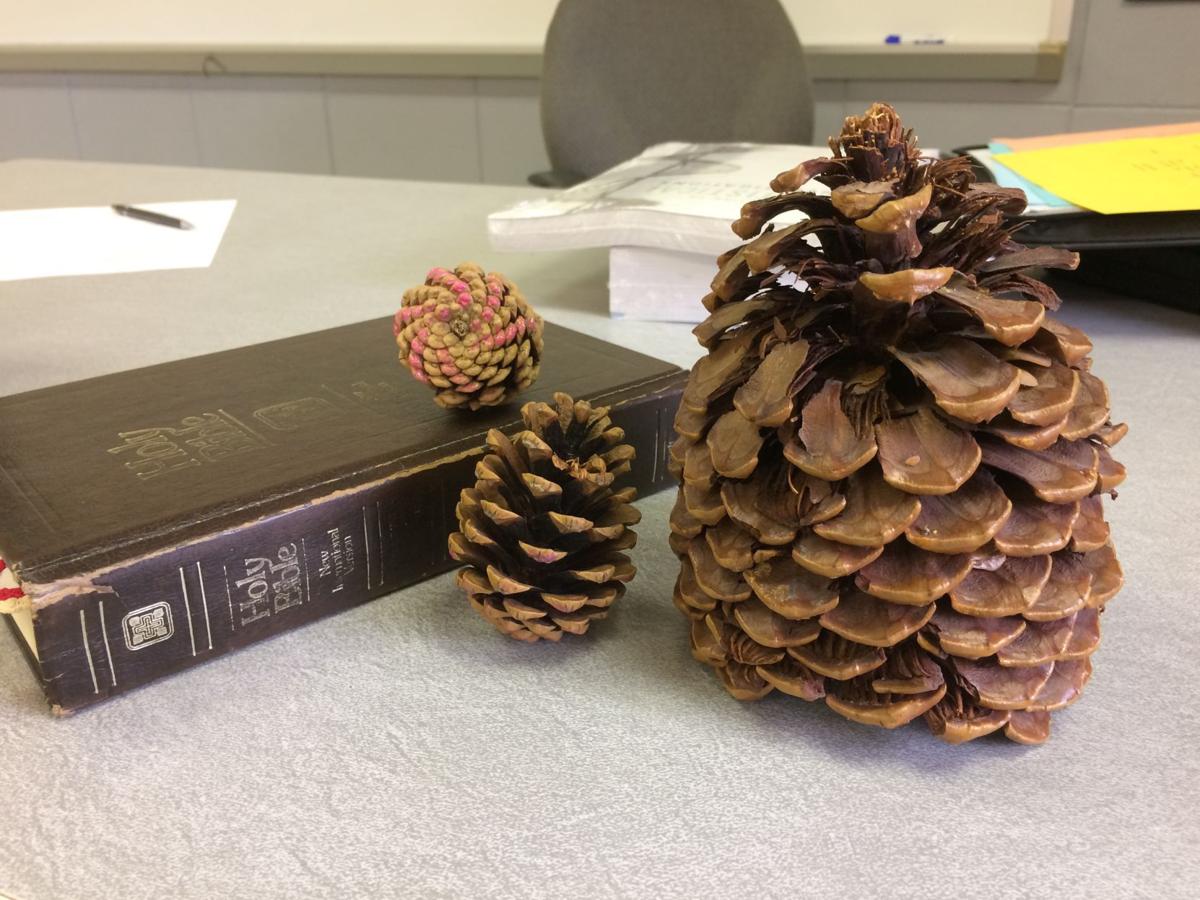 Henry Kramer refers to the Bible when talking about measuring Earth's circumference and diameter, as both are mentioned in Kings. The pinecones are used to illustrate the divine number of 1.618, a ratio often found in nature. 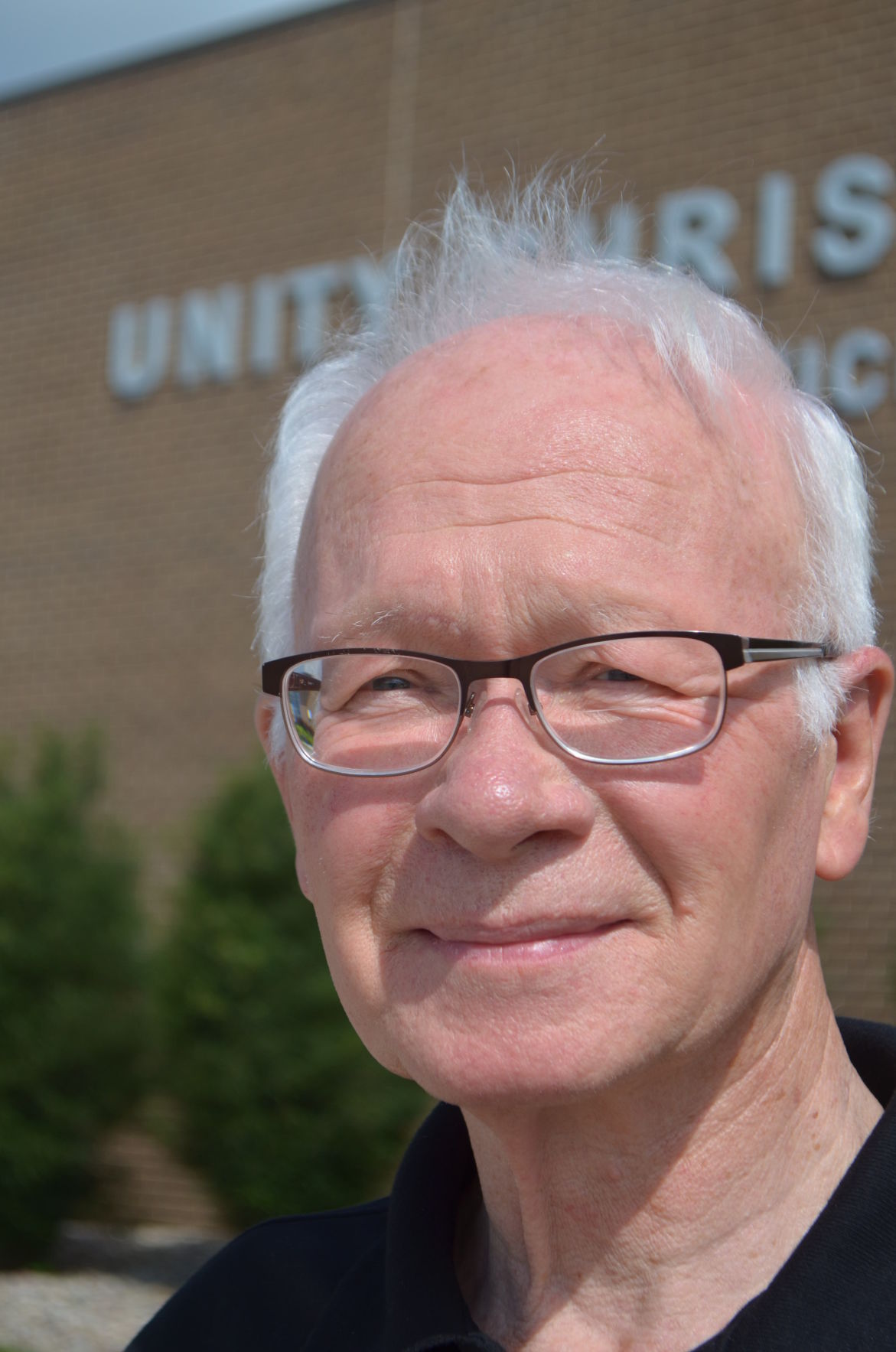 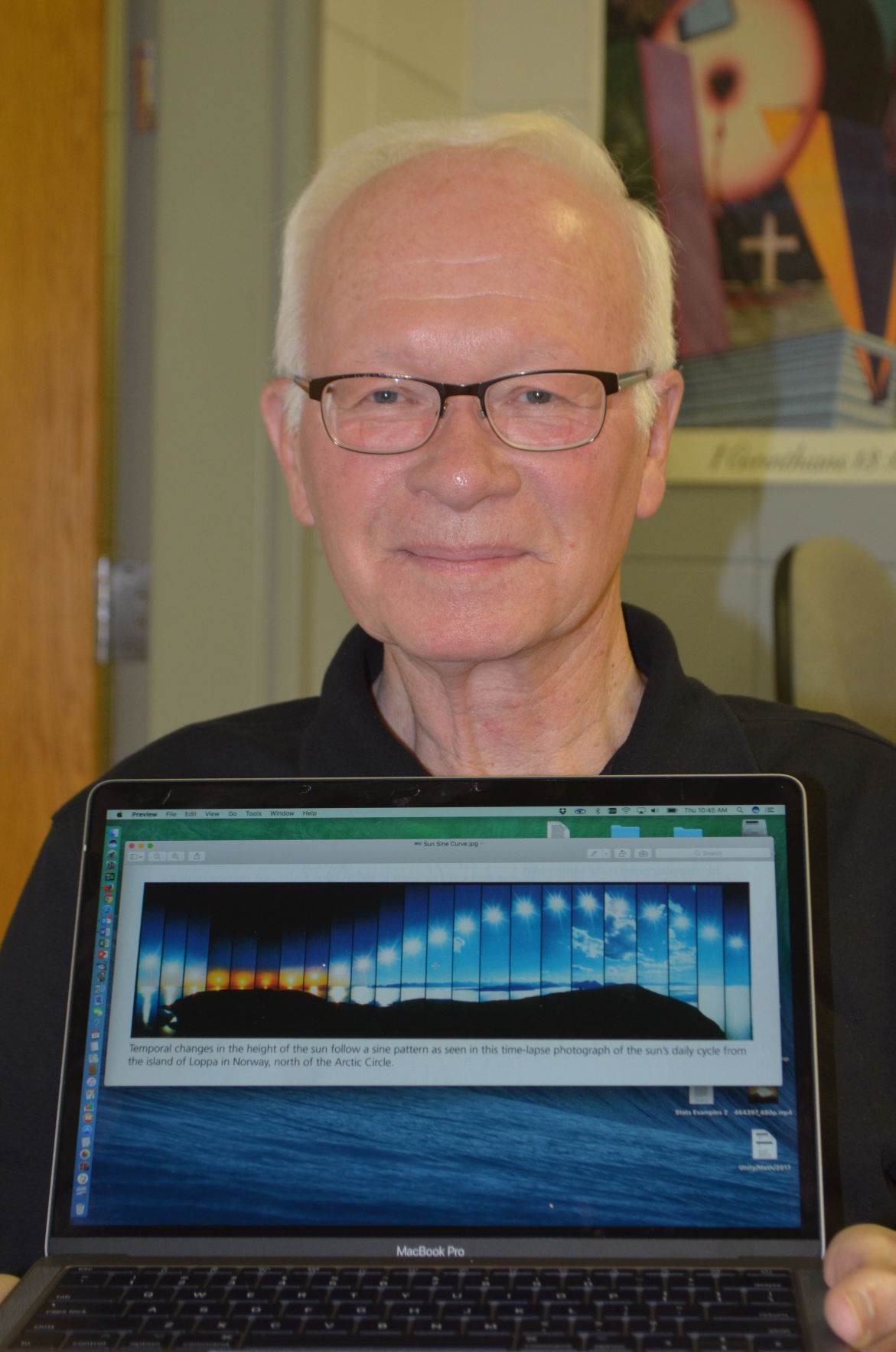 Talk about an equation. Take 54 (years that Kramer has taught or presided over students as an administrator) times 180 days of school and you come up with 9,720 days.

Kramer would laugh off the sum. The solution that matters most to him? Doing God's service while helping educate and shape young people.

"Through mathematics I hope my students see God as the great creator -- designer of the universe, understand the orderliness of creation, and sense the beauty of mathematics in the creation," Kramer wrote as teachers commenced for a few in-service days prior to the start of the school year.

Beauty of mathematics? Kramer said you'll see it Monday as the solar eclipse throws our region into a state of wonder as the moon crosses in front of the sun, casting the moon's shadow on the earth. In 1979, Kramer stood with students at Southwest Christian High School in Edgerton, Minnesota, equipped with a box, a paper and a pinhole, through which he and his students observed the sun's shape disappearing on the paper.

This time around? Kramer holds up his laptop computer at Unity Christian High School and shows the path of the sun in northern Norway, a place where the sun hardly sets in the summertime.

"In Norway, the sun follows a perfect curve, by definition," Kramer said, his voice rising in enthusiasm. "It's a sine curve. We graph it, we write formulas for it and the kids get excited about it."

Unity Christian, in fact, has a bus full of students heading on Monday to York, Nebraska, prime viewing territory for the eclipse. The natural phenomenon will serve as a launch point for class discussions on math, calculus, physics and more as the school year commences.

It's the type of talk -- and learning opportunity -- that has kept Kramer coming back for more, ever since he began teaching and coaching -- and making $4,000 per year (no insurance included) at Westside Christian School in Grand Rapids, Michigan, in 1962 in his first teaching position. Kramer had just graduated from Calvin College in Grand Rapids, where he majored in math and studied science and business administration.

Kramer, a 1958 graduate of Western Christian High School in Hull, Iowa, came to Calvin as a junior transfer, after spending his first two years at Dordt College in Sioux Center, Iowa. At that time, Dordt was a two-year institution.

"Our teams were really, really good, and not because of the coach," Kramer said with a smile.

Wife Dee and Henry had their first child, Rachelle (Rachelle Wiersma, the principal at West High School in Sioux City) on the first day of school in Henry's second year of teaching at Westside School. The family would eventually grow with the addition of son Tim, now an attorney in Sioux Center, and daughter Christine Veurink, a physical therapist in Minneapolis.

The Kramers left Grand Rapids in 1964 to answer a call from Southwest Christian High School in Edgerton, which was seeking an upper-level math teacher to direct courses in algebra, trigonometry and physics. Kramer filled that bill for three years until the school board hired him as the high school administrator, which he did for 33 years.

"When I finished my time at Southwest, of the 14 school board members, 12 were former students of mine," he said.

The year was 2001 and both Henry and Dee believed it was time to look for another challenge/opportunity. With a shortage of upper-level math teachers in the U.S., there was no shortage of calls for his services. The Kramers were flown to and interviewed by school officials at Christian high schools on both the East Coast and West Coast prior to that school year.

Upon arriving home from an interview in San Diego, Henry took a call from Harlan DeVries, then the principal at Unity Christian in Orange City. (DeVries served as elementary principal for nine years at Southwest Christian and, thus, had worked with Henry Kramer.)

The math position allowed Henry Kramer to return to his native Orange City and serve the high school there while also working as an adjunct professor in the math department at Dordt College.

"Teaching was always my entertainment, or relaxation," he said. "It still is."

Ten years ago, Kramer slowed down, but only slightly, and became a part-time teacher. This semester, he will teach afternoons at Unity, directing classes in calculus and statistics. He'll spend mornings serving as executive secretary/treasurer for an organization that collects and distributes some $1.5 million in tuition scholarships for children in need attending any one of 16 Christian schools in a region that stretches from Larchwood, Iowa, to Mason City, Iowa.

"We give 97.5 to 98 percent of what we collect back in tuition scholarships for students whose parents' incomes are less than three times the poverty level," he said. "It is so rewarding to be part of that organization."

Rewarding, too, he said to remain involved in the development of young people, eager learners who continue to motivate and challenge the seasoned pro at the head of the classroom.

"These kids come here wanting to one day become doctors, engineers and educators," he said. "They have a desire to learn. I often hear at the end of our class, 'Is class over?'"

And while the class session may be, the courses continue, as they have for a teacher who began his career equation in the fall of 1962.

"I get to share all of this with kids who are a captive audience here each day," he said. "And you know what? I'm starting my 55th year and I'm still learning!"

Henry Kramer, 76, was raised on a farm five miles west of Orange City, Iowa. The 1958 Western Christian High School graduate earned a degree from Calvin College in 1962. He also has advanced degrees from the University of South Dakota and Minnesota State University at Mankato.

Kramer teaches calculus and statistics, classes which run concurrently at Unity Christian High School and at Dordt College, where Kramer serves as an adjunct professor.

ORANGE CITY, Iowa | Corrie Hayes visited Orange City for her first Tulip Festival two years ago. She rode in the Volksparade as Miss Teen of A…

GALLAGHER: Custodian serves school from which she graduated 51 years ago

DENISON, Iowa | Marge Overhue opens a door and steps onto the gym floor at Broadway Elementary School in Denison.

SIOUX CENTER, Iowa | It's not often that a comedian who once sabotaged a Sen. John McCain press conference sets up shop in the most Republican…

SIOUX CENTER, Iowa -- Dordt College has placed its band director on leave amid reports he had "inappropriate contact with students," a top col…

Henry Kramer refers to the Bible when talking about measuring Earth's circumference and diameter, as both are mentioned in Kings. The pinecones are used to illustrate the divine number of 1.618, a ratio often found in nature.