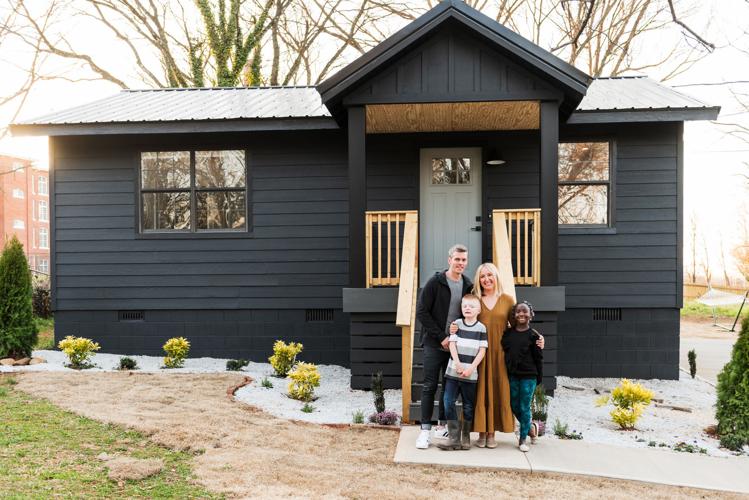 Alison, Tim, Sammy, and Phaniella Lowry outside of their home in Greenville, South Carolina. Alison Lowery is a former Sioux City resident. 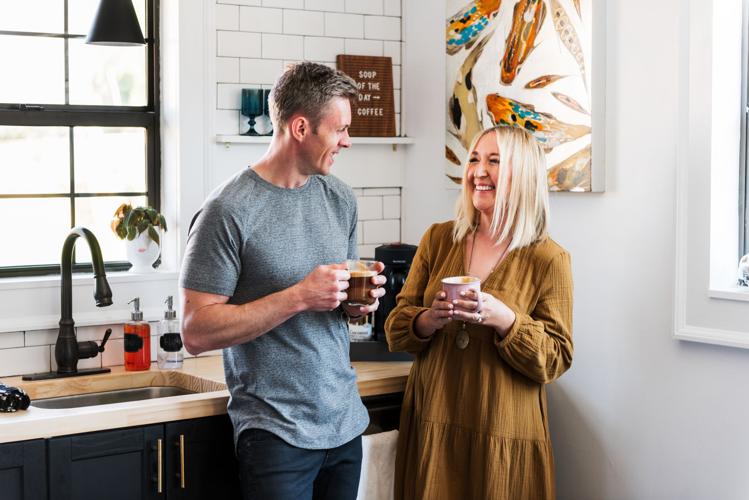 Tim and Alison Storm Lowry in a house they renovated in Greenville, South Carolina. They chronicled the process in "First Time Fixer," which is a part of Chip and Joanna Gaines' Magnolia Network. 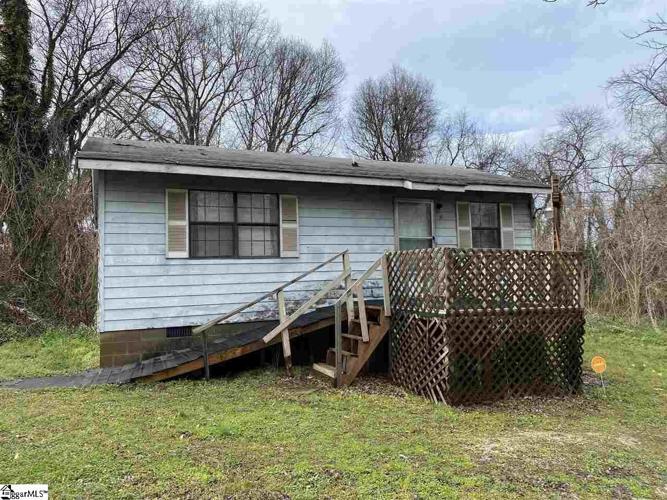 GREENVILLE, S.C. --  To her friends and family, Alison Storm Lowry has always been known to be frugal.

"I prefer to think of myself as thrifty as opposed to cheap," the former Sioux Cityan explained. "I'm not above doing some dumpster diving as long as it is for something nice."

However, Lowry knew that she, her husband Tim, their 9-year-old son Sammy and 6-year-old daughter Phaniella, were quickly outgrowing their Greenville, South Carolina, home.

"Everything was way out of our price range," Lowry said, sighing at the memory. "We had to buy a small place and fix it up ourselves."

In early 2020, the Lowrys discovered a property that had once been a small church.

"You had to use your imagination but I could picture a living space where pews once sat and a bedroom that once held a pulpit," she said.

As they were getting ready for some demolition, Lowry saw a casting call ad for a new television program called "First Time Fixer."

Featured on the Magnolia Network -- a joint media venture between Discovery, Inc. and "Fixer Uppers"' Chip and Joanna Gaines -- "First Time Fixer" showcases first-time renovators as they build the home of their dreams.

"The producers wanted to feature us on an episode of their show," Lowry said. "Plus they wanted us to record every step of our renovation, both the good stuff and the bad stuff, to be used as footage."

"First Time Fixer: Taking on a Carolina Clunker" -- with the Lowry Family -- premiered on Nov. 12. The episode can be seen at magnolia.com and discoveryplus.com.

So, between the end of October 2020 until February 2021, the Lowrys lived a "Truman Show"-type existence, taping their progress with camcorders and cellphones.

Surprisingly, this wasn't a stretch for Lowry, a former television reporter who began her career at Sioux City's KTIV.

However, living in a house that was part home/part reality show set wasn't always comfortable for Tim Lowry, who owns an online marketing business.

"To be honest, we were both new to home renovation," Lowry said. "I like watching how-to TV shows and Tim became addicted to YouTube videos. We got through it OK."

Still, there were a few mishaps along the way, such as a disappearing contractor as well as an IKEA kitchen cabinet that came incomplete.

"When we trying to assemble the cabinet, we found all of the doors, shelves and hinges," Lowry said. "What was missing was the kitchen cabinet box, which attaches everything together."

According to IKEA, the desired box could be back-ordered, which wasn't good enough for Lowry.

"During a renovation, you learned to be flexible," she said, solving the problem by purchasing a similar kitchen cabinet box at a local building supply store. "There is nothing wrong with going with Plan B."

Lowry also had to be flexible when it came to the budget for the family's fixer-upper.

In the end, Lowry was able to take a former church, turning it into a one-of-a-kind dream house.

"This house is so much better than your typical, turn-key home," she said. "That's because we've invested so much sweat equity into the house in the form of sleepless nights, altered plans and, in my case, a bad experience with poison ivy."

Lowry let out a sigh.

"We've made it through home renovation and it looks beautiful," she said, pointing out personal touches as well as a decorating style that blends a modern aesthetic with some mid-20th century panache.

So, what tips can Lowry give other first-time fixers?

Plus the home renovation experience has given Lowry a much-needed shot of confidence.

"There are plenty of old churches in the south," she said. "I'd love to see them repurposed as family homes."

Catching up with Alison Storm Lowry

Alison Storm Lowry has been keeping busy since her days as a reporter for KTIV-TV.

Relocating to Greenville, South Carolina 14 years ago, she has worked in radio and television as well as in freelance journalist for both magazines and blogs.

More recently, Lowry has become the producer and host of "My Pleasure: The Unofficial Chick-fil-A Podcast" (chickfilapodcast.com), in which she serves up chat, laugh and chicken on the only podcast dedicated to the national chain.

You can learn more about her projects as alisonstorm.com.

When home renovation gets real!

Launched digitally on July 15, Magnolia Network will make its cable debut when it replaces the existing DIY Network on Jan. 5, 2022.

If your home improvement projects don’t look as good as the ones Joanna Gaines does, don’t fret. Initially, hers didn’t, either.

"People tell me they wake up with me every morning and they've been doing it for years," Al Joens said with a smile. "I take that responsibili…

While working with her parents, McManamy finds perfect balance between work and family

Sydney McManamy acknowledges she has an addiction, but has no interest in finding a cure.

Rockers All that Remains, with Tallah, Varials and Miss May I coming to Anthem

ODEBOLT, Iowa -- In the Bible, the prophet Isaiah had visions of God in heaven as well as the birth of the baby Jesus in the manger on Christmas Day.

Could the zombie fungus from 'The Last of Us' really happen?

The signs and symptoms of tonsillitis

The signs and symptoms of tonsillitis

Study looks at when dogs should start receiving cancer screenings

Study looks at when dogs should start receiving cancer screenings

Break these eating habits to take good care of your heart

Break these eating habits to take good care of your heart

Alison, Tim, Sammy, and Phaniella Lowry outside of their home in Greenville, South Carolina. Alison Lowery is a former Sioux City resident.

Tim and Alison Storm Lowry in a house they renovated in Greenville, South Carolina. They chronicled the process in "First Time Fixer," which is a part of Chip and Joanna Gaines' Magnolia Network.