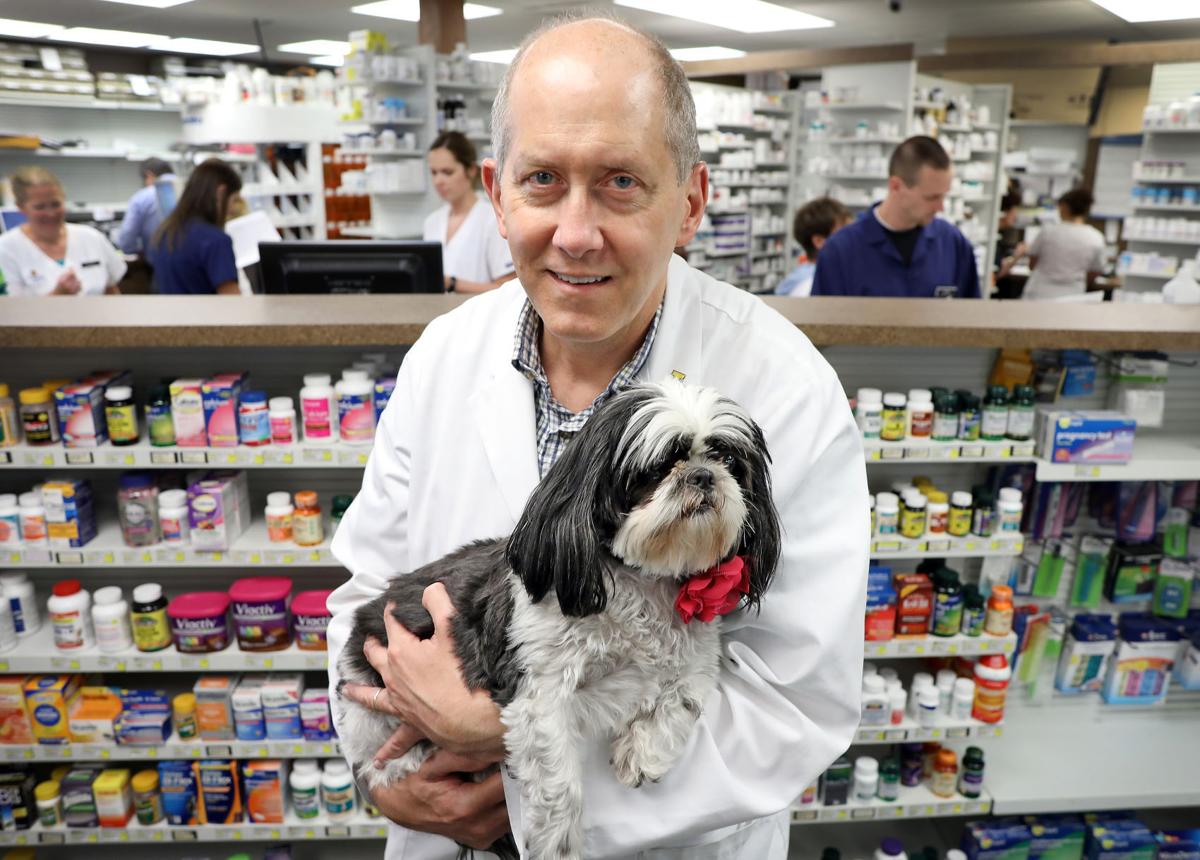 SIOUX CITY | When buying various drugs for his family's dog, who later succumbed to renal failure, Bill Drilling couldn't help but think there must be a high consumer demand for pet medications.

Drilling, co-owner of Drilling Pharmacy in Morningside, said JoJo the Shih Tzu was taking more medications than all the members of his household combined.

"We probably kept her going an extra two or three years being on those medications," Drilling said, while his daughter's 7-year-old Shih Tzu, Lizzie, toddled around the pharmacy's gift shop on a leash.

The little black and white pooch, who donned a red flower on her collar, takes flea, tick and heartworm preventatives that can now be purchased at Drilling Pharmacy.

A year ago, Drilling said he added pet-specific medications, such as Heartgard, which is available by prescription only, to make the process of buying them more convenient and economical for customers. Hy-Vee stores also added flea and tick and heartworm drugs to their pharmacies in 2016, citing customer convenience.

It's a trend that started several years ago with big-box stores such as Costco, Target and Walmart that will only likely continue to spread as insurers and pharmacy benefit managers increasingly require human patients to buy their own drugs from mail-order services. More and more independent brick and mortar pharmacies are opting to take a bite out of the pet medication market to help keep their doors open.

According to the American Pet Products Association, $66.75 billion was spent on U.S. pets in 2016. Americans shelled out $15.95 billion of that on veterinary care and $14.71 billion on supplies and over-the-counter medications.

"We got all our medications for JoJo through the veterinarian. It was very expensive," said Drilling, who consulted with pharmacists who had long since diversified into the world of pet meds before taking the leap. "We have had people wanting to use their insurance card on the dog saying, 'It's a family member.' It was a shock when I said they couldn't do it."

Although selling pet-specific medications is a fairly new venture for independent pharmacies, Drilling said he can recall filling prescriptions for dogs and cats who needed insulin to manage diabetes throughout his career. Many prescription drugs are approved for use in both humans and animals.

"Except for the Heartgard and TruProfen (an anti-inflammatory), basically everything else we have would be used in a human, too," said Drilling, who cautions against sharing your dog's or cat's blood pressure pills and other drugs and encourages storing pet medications separate from human medications.

Although medications for man's best friends may be cheaper at a pharmacy, there is currently no federal law preventing veterinarians from charging a fee for writing prescriptions for them, according to the American Veterinary Medical Association (AVMA), a nonprofit association that represents more than 89,000 U.S. veterinarians.

When faced with one of these fees, Drilling said a customer decided to purchase her pet's medication from her veterinarian rather than have it filled at his pharmacy. He recalled another case where a prescription for an animal was so specialized that it had to be made at a veterinary compounding pharmacy.

This year, a bill was introduced into the U.S. House of Representatives that directs the Federal Trade Commission to require prescribers of animal drugs to verify prescriptions and provide copies of prescriptions to pet owners, pet owner designees and pharmacies without the prescriber demanding payment or establishing other conditions.

The AVMA opposes the Fairness to Pet Owners Act of 2017, which has been stuck in committee since January, claiming the extra regulatory burden could limit the number of patients veterinary clinics are able to see and lead pet care costs to rise even higher.

In most cases, the AVMA says clients are able to receive a written prescription from their veterinarian to fill at a pharmacy simply by asking for it. In Iowa, Nebraska and South Dakota, not honoring a client's request for a prescription in lieu of dispensing a medication could be considered unprofessional conduct and grounds for discipline.

The AVMA recommends that pet owners consider getting their pet's medications from a veterinarian if the veterinarian has the medication in stock and the pet needs it immediately. The AVMA also notes that veterinarians and veterinary technicians can answer questions on the spot and may even be able to demonstrate how to give the medication to the pet right in the office.

While shopping around may not work for every pet owner, if your dog or cat takes a medication on a consistent basis, as JoJo did, Drilling said it doesn't hurt to try. And his delivery drivers will even bring pet medications to your doorstep.

"Whatever pharmacy you go to, you should just check and see if they offer this just for the sake of convenience," he said. "Check the prices and see if this could save you a little money."

Why does my pet need a prescription?

The American Veterinary Medical Association (AVMA) says many prescription drugs are only effective for specific problems and may actually be harmful to your pet if used without a veterinary examination and diagnosis.

Heartworm preventatives, for example, are labeled as "prescription only." Giving this chewable tablet, which provides protection against heartworms and treats and controls roundworms and hookworms, to your dog without knowing whether they have heartworms can be dangerous.

The AVMA says that in some cases, administering preventives to heartworm positive dogs can result in a life-threatening anaphylactic reaction.

Keep your pet safe and cool this summer

SOUTH SIOUX CITY | The "dog days of summer" -- the hottest, most humid time of the year -- are on the horizon.

SIOUX CITY | Take one pill by mouth at bedtime.

SIOUX CITY | A Sioux City woman in her early 30s said she has lost track of the number of friends and acquaintances who've died from drug overdoses.

SIOUX CITY | Katlynn Schreiner laces up her aqua blue and fuchsia Asics on a Thursday evening, pops in her earbuds and heads out of the door o…

Get on the bus: School district seeks more drivers as ridership increases

SIOUX CITY | During his first year working as a bus driver for the Sioux City Community School District, George Gengler was pelted in the back…

Obesity among pets is a growing epidemic

SOUTH SIOUX CITY | With his pink tongue poked slightly out of his mouth, Thor paced in circles in a glass tank on a Friday morning.

SIOUX CITY -- Bill Drilling is working side by side with a new pharmacist at his Morningside pharmacy -- his daughter Sarah Sorensen, marking …

Winter can be a dangerous time for your pet

SIOUX CITY -- The best place for your dog or cat on a cold winter's day is cuddled up next to you on the couch, according to Kelly Erie, publi…