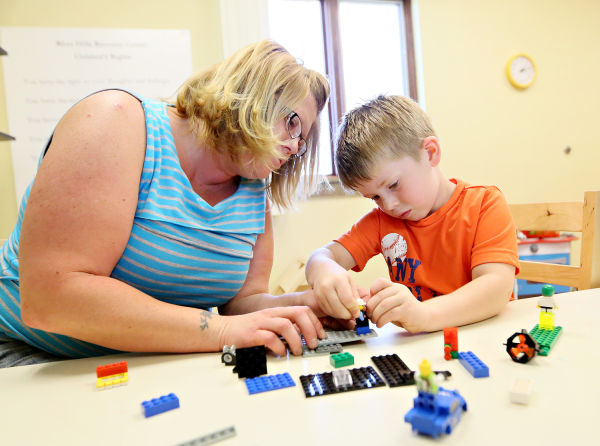 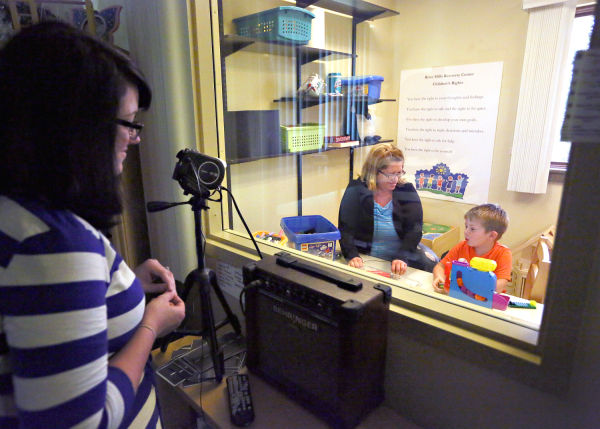 Becca Whitlock, a therapist for Jackson Recovery Centers, left, demonstrates how she observes Lesley Wayt, center, and her son Connor Schon, 4, right, during Parent-Child Interaction Therapy at River Hills Recovery Center. Whitlock looks in through a two-way mirror and guides Wayt with suggestions about how to respond to her son.

Lesley Wayt thought running, yelling and jumping on the furniture were just signs of the terrible twos.

When her son Connor Schon turned 4, and his bad behaviors persisted, she knew something wasn't quite right.

Since February 2011, 100 children ages 2 to 7 have participated in PCIT, an evidence-based intervention designed to promote a positive parent-child relationship while reducing disruptive behaviors at home, such as fighting with siblings, refusing to get ready for bed and dawdling during cleanup time.

"He's really good at complying at this point," licensed mental health counselor and therapist Becca Whitlock said of Connor. "His behaviors are fantastic."

Before PCIT, Wayt said she felt guilty disciplining Connor when he misbehaved.

"I was really unsure how to respond. I didn't know how to discipline. I would just kind of let it go," Wayt recalled, as she sat at a table in a yellow playroom at River Hills picking Legos out of a blue plastic bucket.

Connor snapped the Legos onto a gray base to create a spaceship.

"You're doing so good with those Legos! You're good at building things, Connor," she said enthusiastically.

After a few minutes, Wayt, with Connor's help, was flying a spaceship of her own in the air with her hand. "Zooommm!" she said, following Connor's lead. "I love to play Legos with you."

Once a week, Wayt wears an earpiece as she colors, assembles Mr. Potato Head or drops large, colored plastic coins into a toy cash register with Connor. A microphone in the playroom's ceiling amplifies their voices.

On the other side of a two-way mirror, Whitlock stands in her office intently watching mother and son play. She acts as a coach, giving Wayt feedback through the earpiece.

During Child Directed Interaction, which is similar to play therapy, Whitlock suggests ways that Wayt can encourage and support her son while playing with a toy of his choice. Wayt admitted that she didn't exactly know how to play with her son before PCIT.

Six months ago, Whitlock said Connor wouldn't have even sat down for two minutes and played Legos with his mom. When Wayt used to try to play with Connor he would scream, "Stop it!" He wasn't used to the attention.

During the second phase of PCIT, known as Parent Directed Interaction, Whitlock advises Wayt on commands, which are to be given to Connor one at a time in a normal tone of voice.

"There's rules to what commands look like and how they're given and how often they're given," Whitlock explained. "If you go to the store you'll see parents giving 15 commands in a five-second period and no kid can comply with that."

She said parents need to "pull back," which takes the anger and frustration out of telling their child what to do.

Wayt and Connor have been so successful that they now attend PCIT monthly. A few weeks ago, Whitlock accompanied Wayt to Fareway and Family Dollar to practice what she's learned in public.

"His behavior has improved 80-90 percent," Wayt said of Connor. "It's strengthened our relationship and connected us as a mother and son."

At one end of the playroom is a small enclosed area with a door. The walls are low enough for an adult to easily see over, but too high for a young child.

Connor cried the first and only time he was sent there for a timeout. Wayt said she hesitated when disciplining Connor in the past, because she felt guilty.

"I feel really bad when he starts to cry or get upset," she said. "For me to put him in timeout at home, it just wasn't something that I could do on my own."

Whitlock got Wayt through that first timeout with words of, "It's OK, Lesley. He's fine. You're going to get through this."

Now, Connor can sit in a chair quietly during timeout without attempting to flee. Although discipline and listening are pieces of PCIT, Whitlock said most behavior changes occur during playtime when the child's needs are being met.

"Once your needs are met, very rarely do you need to act out to try to get what you want," she said. "I think parents are typically looking for someone to tell them how to get their kids to listen. Really it's about listening to the kids first."

The program is offered to children ages 2 to 7 and their parents at River Hills Recovery Center, 3320 W. Fourth St.

Research has shown that children with attention-deficit hyperactivity disorder and attachment issues benefit from PCIT.

Connie Forsberg swallowed an anti-anxiety pill, held her pillow tightly to her face and screamed, "I just want it to stop!" as she sat on her …

When Alison Jones breastfed her daughter Henlee, now 4, she said she would occasionally drift off to sleep in a chair while holding her daughter in her arms.

Karissa Holder admits that she was "clueless" about parenting when she brought her daughter Ariah home from the hospital.

Popping a few Adderall or Ritalin once in a while to help study for an exam might seem harmless, but medical professionals say the stimulants …

Becca Whitlock, a therapist for Jackson Recovery Centers, left, demonstrates how she observes Lesley Wayt, center, and her son Connor Schon, 4, right, during Parent-Child Interaction Therapy at River Hills Recovery Center. Whitlock looks in through a two-way mirror and guides Wayt with suggestions about how to respond to her son.