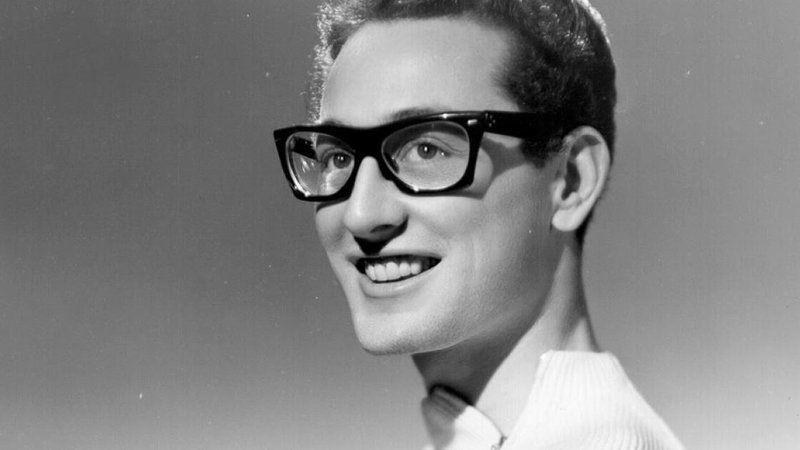 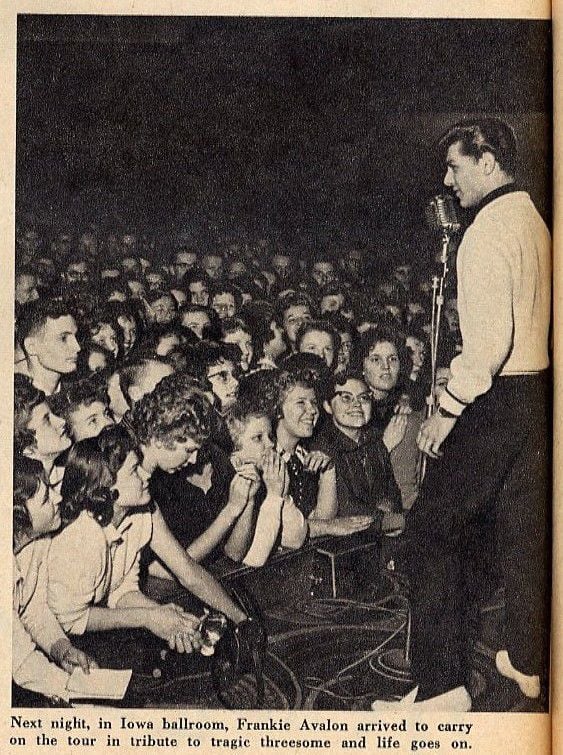 Teenybopper Frankie Avalon headlined the Winter Dance Party rock and roll tour when it came to Sioux City's Shore Acres Ballroom on Feb. 4, 1959. Avalon was a last-minute substitute for Buddy Holly, Ritchie Valens and J.P. "The Big Bopper" Richardson, who were killed in a plane crash in Clear Lake, Iowa, the day before. 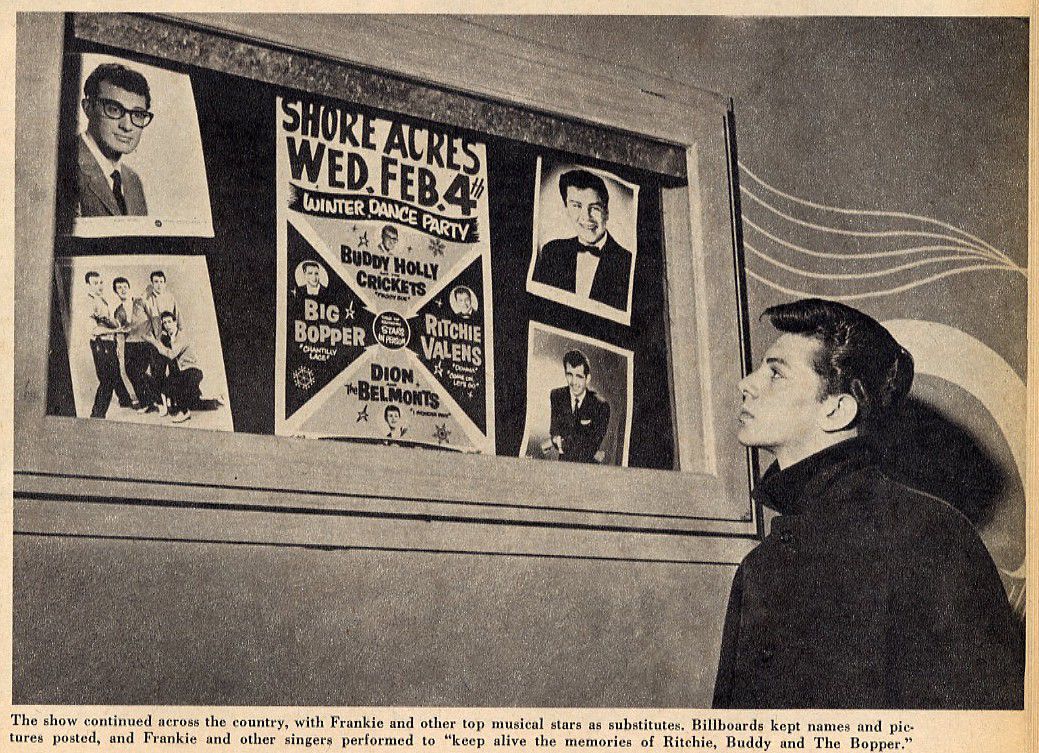 However, the very next night, a group of hearty musicians pulled themselves together to put on a show at Sioux City's Shore Acres Ballroom (now the home of Sioux City Community Theatre).

"People thought the infamous Winter Dance Party rock and roll tour of 1959 ended when Buddy Holly, Ritchie Valens and J.P. 'The Big Bopper' Richardson were killed in a plane crash following their performance at Clear Lake, Iowa's Surf Ballroom," Sevan Garabedian explained, nearly 60 years later. "That simply wasn't the case. Even though the performers were devastated, the promoters wanted the tour to continue."

With less than 24 hours notice, the then-18-year-old Frankie Avalon found himself on the Shore Acres Ballroom stage as Holly's last-minute replacement for the Sioux City gig.

The show must go on, right? Well, actually it was part of a series of catastrophes that occurred on a tour that brought rock and roll icons Holly, 22, Valens, 17, and Richardson, 28, together for what would've been a 24-day, 24-city tour which began Jan. 23, 1959, in Milwaukee.

"The tour was a mess from the very start since, in those pre-interstate days, travel in the Midwest in the dead of winter was nearly impossible," Garabedian said. "The bus kept on breaking down, the musicians were sick, and things were getting out of control."

Garabedian ought to know.

Along with co-producer James McCool, he is responsible for "The Winter Dance Party Tapes," a documentary series that chronicled the tour, which also included such musicians as Waylon Jennings, Carl Bunch and Dion of Dion and the Belmonts.

In anticipation of the anniversary, Garabedian will be visiting the Sioux City Community Theatre on Monday. He's also hoping to meet with fans who may have attended the Winter Dance Party show. This is what he and McCool have been doing for years.

Along with interviews with many of the surviving musicians, Garabedian and McCool also spoke with the young music fans who attended the Winter Dance Party shows, including those who saw Holly, Valens and the Big Bopper perform in Clear Lake hours before their deaths.

"The Surf Ballroom was full of teenagers that night," Garabedian explained. "Now, these same teenagers are in their 70s, but they remember the event as if it happened yesterday."

He said the wannabe musicians in the audience were eyeballing the way Holly held his guitar, the girls were screaming for their rock and roll idols, and the guys were hoping to get lucky.

"That's the strange thing about the show," Garabedian noted. "The ladies could give detailed information about the performances while the guys simply remembered the cute girl standing in front of them. Guess that's pretty typical for teenagers."

Following the Clear Lake show, the show was slated to play in Moorhead, Minnesota (a 365-mile drive north), on Feb. 3, before traveling to Sioux City (325 miles in the other direction) for the Feb. 4 show.

"That zig-zagging around was a reflection of poor planning by the promoters," Garabedian said. "Terribly frustrated with all of the problems with the bus, Holly arranged with a local flying service to get him to Moorhead."

'That'll Be the Day'

A 1947, single-engine, V-tailed Beechcraft 35 Bonanza, flown by 21-year-old Roger Peterson, departed the Mason City airport, with Holly, Valens and Richardson as his passengers, at about 12:55 a.m. Feb. 3.

"Waylon Jennings, who was then a part of Holly's band, was slated to be on the plane," Garabedian said. "Since (Richardson) had caught the flu during the tour, Waylon gave him his seat."

Shortly after takeoff, the plane crashed in a farm field, less than six miles northwest of the airport. The three musicians and the pilot perished in the crash.

"The other musicians had no idea what happened until their bus made it to Moorhead," Garabedian said. "Needless to say, everybody was devastated."

This devastation didn't just come from the loss of three young musicians who had a bright future in front of them.

'Raining in My Heart'

"The crash occurred when Elvis was in the Army, Little Richard had left rock for religion and Jerry Lee Lewis was caught up in a scandal," Garabedian said. "Rock and roll lost its innocence the day Buddy Holly, Ritchie Valens and The Big Bopper died."

The impact was felt immediately on the Winter Dance Party tour.

"Going from a rocker headliner like Buddy Holly to a teenybopper headliner Frankie Avalon was a sign that music was changing as the 1950s ended and the 1960s began," Garabedian said. "The pendulum didn't swing back until The Beatles invaded America, with a sound they admitted was influenced by Elvis, Little Richard and, yes, Buddy Holly."

In 1972, singer-songwriter Don McLean scored a hit single with "American Pie" -- a song which referenced the plane crash.

To some degree, this song struck a chord with the people in the Cerro Gordo town of Clear Lake. Every year, the town of 7,800 hosts an event at the Surf Ballroom that attracts fans from around the world.

For more than a decade, Garabedian has made the trip from his native Montreal, Canada.

Born in 1976, the 42-year-old Garabedian might seem like an unlikely fan of old time rock and roll. This is something he freely admits.

"My favorite radio station changed to an 'oldies' station when I was a kid," he explained, "but the music of Buddy Holly, Eddie Cochran and the Everly Brothers seemed new to me."

"I became such a Buddy Holly 'fan boy,' I knew I had to pay a pilgrimage to the Surf Ballroom, which is like a time capsule to a more innocent era," he said.

That held significant appeal to Garabedian, who has devoted considerable time collecting items and conducting interviews from those who remember the Winter Dance Party rock and roll tour.

This year, however, will mark the first time he has visited Sioux City.

"I'm looking forward to visiting the Sioux City Community Theatre," he said, softly. "I want to pay my respects."

Mostly, Garabedian wants to retrace all of the good times.

"Feb. 3, 1959, is an important day in rock and roll history," he said. "We lost three artists who all had bright futures and the genre became less innocent."

"Rock and roll music lives on," he said. "Nothing will stop the music."

How to build your own DIY air conditioner

His hair may be grayer and it may take him a week to recover from each show, but Don Bourret, 73, is still living out his rock and roll dreams.

The Groovediggers celebrate life by singing about death

SIOUX CITY | Looking through an old notebook, Mike Langley recited lyrics to a song he had written.

On a hot July afternoon, Johnnie Bolin admitted he was feeling a little bit tired, a little bit sore but, other than that, no worse for wear.

Teenybopper Frankie Avalon headlined the Winter Dance Party rock and roll tour when it came to Sioux City's Shore Acres Ballroom on Feb. 4, 1959. Avalon was a last-minute substitute for Buddy Holly, Ritchie Valens and J.P. "The Big Bopper" Richardson, who were killed in a plane crash in Clear Lake, Iowa, the day before.