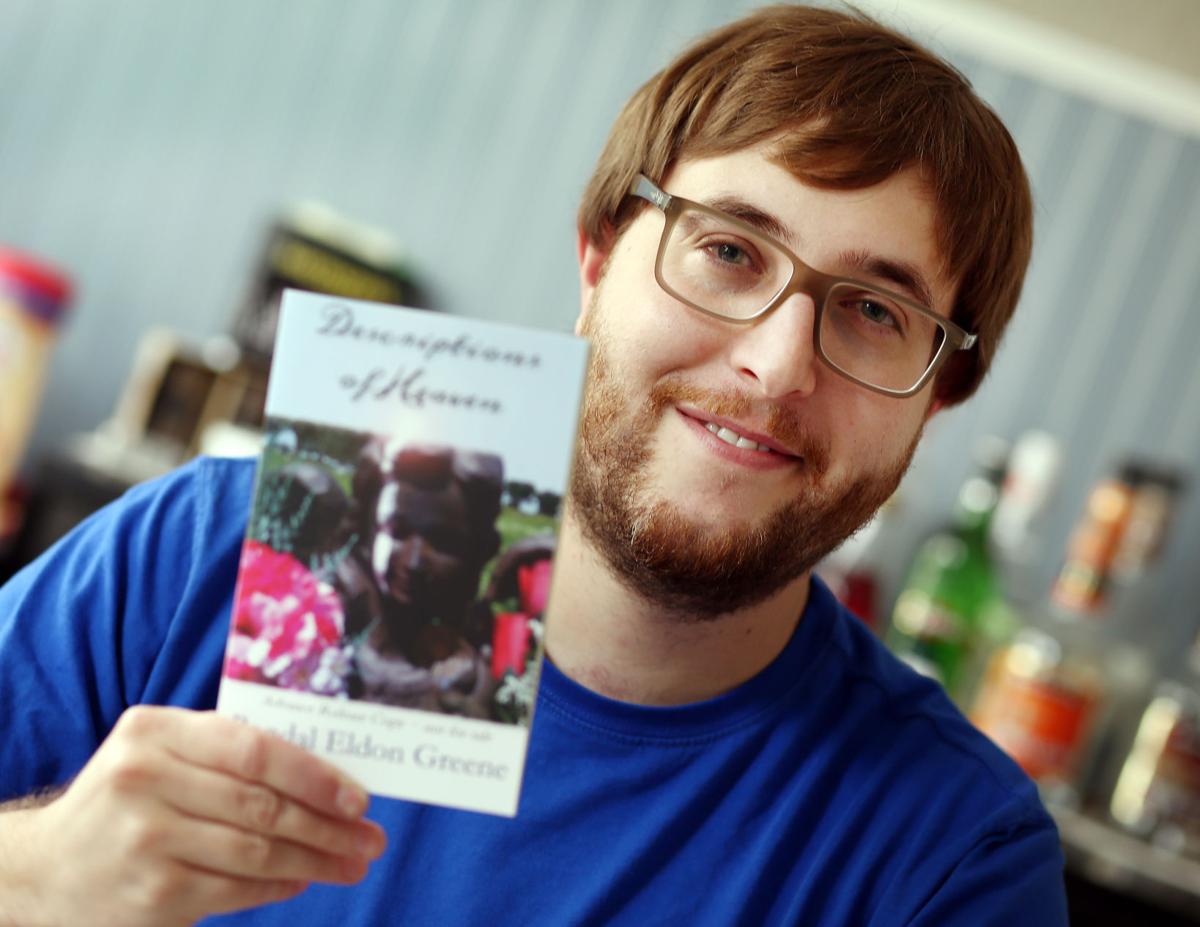 Sioux City-based novelist Randal Eldon Greene will be signing copies of his "Descriptions of Heaven" at Blue Cafe, 1301 Pierce St. The event, which takes place at 5 p.m. Thursday, will also include jazz pianist as well as readings by Greene in addition to Omaha poet Teniesha Kessler. 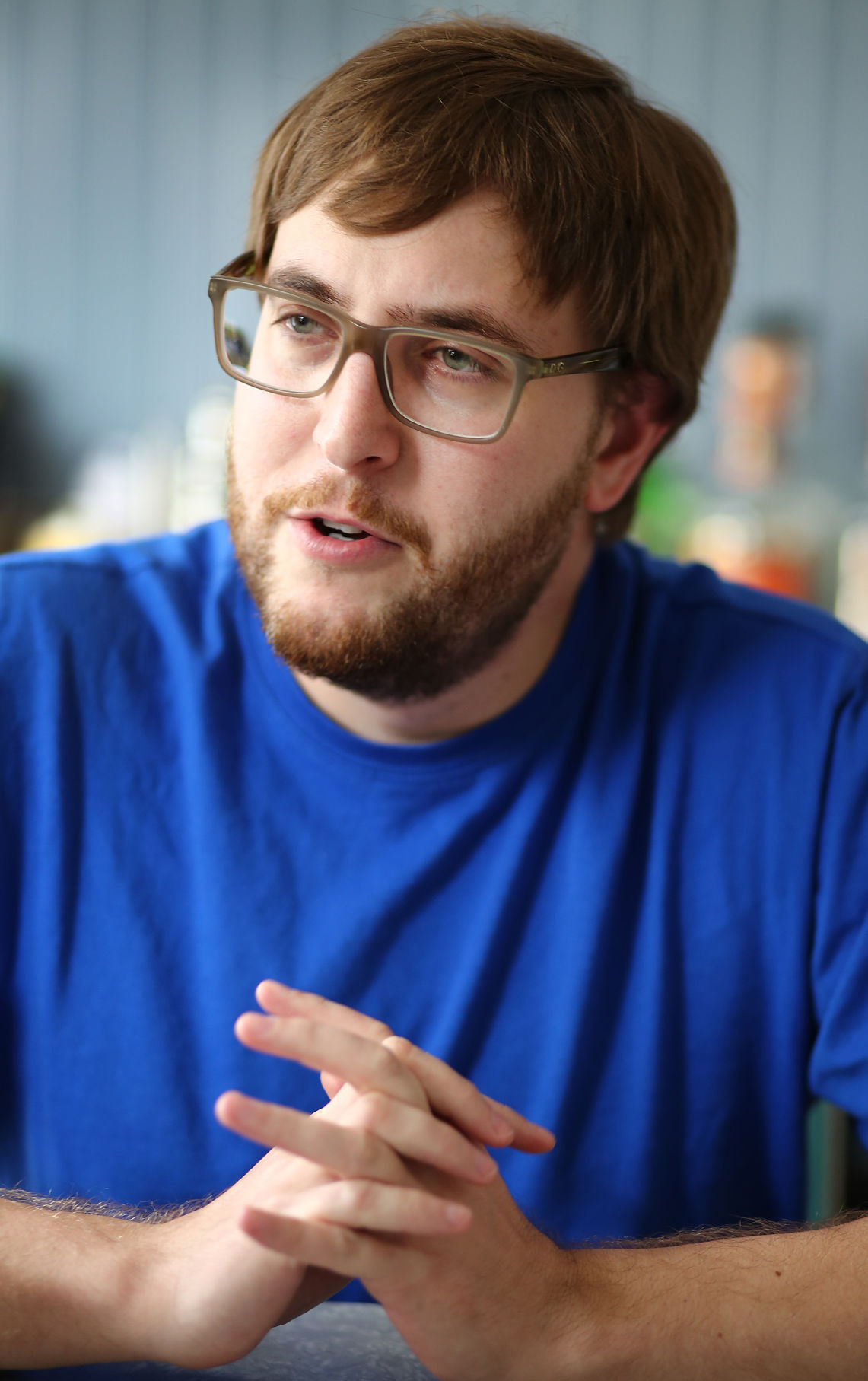 First-time novelist Randal Eldon Greene said that even though "Descriptions of Heaven" is an allegory on the environment, the book doesn't hit readers over the head with a political statement.

SIOUX CITY | Most early afternoons, you will find writer Randal Eldon Greene furiously tapping away on a tablet while seated at a table at Blue Cafe.

"I come here because the servers will always refill my coffee cup," the Dakota City native explained. "Coffee is an essential part of my writing process and this has become my go-to place."

Perhaps it shouldn't come as much of surprise that Greene will be signing copes of "Descriptions of Heaven" -- his well-reviewed 2016 novella -- at the 1301 Pierce St. coffee house at 5 p.m. Thursday.

"Descriptions of Heaven" revolves around Robert, a linguist, and his wife Natalia, a cancer survivor. Natalia's cancer returns shortly after an unknown creature appears near the couple's idyllic home on New Bedford Lake.

In addition to the book signing, Greene will read 14 short pieces during an evening that will also include an appearance by Omaha-based poet Teniesha Kessler and jazz pianist Chris Larson.

"It's my hope that people will make an entire night of it," he said. "They can stick around for some jazz, grab a light dinner and enjoy my reading."

I love the way you described "Descriptions of Heaven" as an example of "clime fiction" since it is fiction that revolves around the climate. Do you think you can address environmental issues more easily when they are part of a piece of fiction?

"I think so. People who read 'Descriptions of Heaven' do so because they want to be entertained and not preached to."

Having said that, who is reading the book?

"That's a good question because it's hard to pinpoint the readership. From what I've heard, the typical 'Descriptions of Heaven' reader has been older and educated. I've heard from a lot of English and literature professors who've read the book. It's also being used in college classes dealing with the topic of death and dying. This makes sense to me since the environment is subtext to 'Descriptions of Heaven' while the cancer story is more in-your-face."

It's interesting that you said the reader of your book tends to be a bit older than you. You're only in your early 30s. Were you trying to capture an older audience?

"I don't know if I was consciously going after older readers. All I know is that writers my age tend to take on the voice and rhythm of a beat poet. If they're not doing that, they're trying to be an ironic narrator. With 'Description of Heaven,' I wasn't trying to be cool or ironic. Instead, the tone was very contemplative."

At Blue Cafe, you'll also be doing a reading of your short stories. Does it help your writing to see how a live audience reacts to the stories?

"Absolutely. You can see if the audience is responding to the story positively. That's always a good sign. On the other hand, you'll be also be able to see if your reading completely confuses the audience. then it's back to the drawing board."

WHAT: Book signing and reading by Sioux City-based novelist Randal Eldon Greene in addition to live jazz and poetry

Pandemic stress is here to stay

The roaring 20s: South Sioux City native discovers the funny side of growing up

Andy Boyle would like you to know that he isn't some self-help guru or a lifestyle coach.

Hogwarts in the hot seat: Examining the gender politics of Harry Potter

SIOUX CITY | As a young girl growing up in Treynor, Iowa, Jamie Jacobsen remembered falling in love with all of the film adaptations of J.K. R…

NORTH SIOUX CITY | In his daydreams, Raymond Semple can be anything he wants to be.

SIOUX CITY | Lawton-based author Donna M. Young will be signing copies of two of her newest novels throughout the month of July.

Sioux City-based novelist Randal Eldon Greene will be signing copies of his "Descriptions of Heaven" at Blue Cafe, 1301 Pierce St. The event, which takes place at 5 p.m. Thursday, will also include jazz pianist as well as readings by Greene in addition to Omaha poet Teniesha Kessler.

First-time novelist Randal Eldon Greene said that even though "Descriptions of Heaven" is an allegory on the environment, the book doesn't hit readers over the head with a political statement.