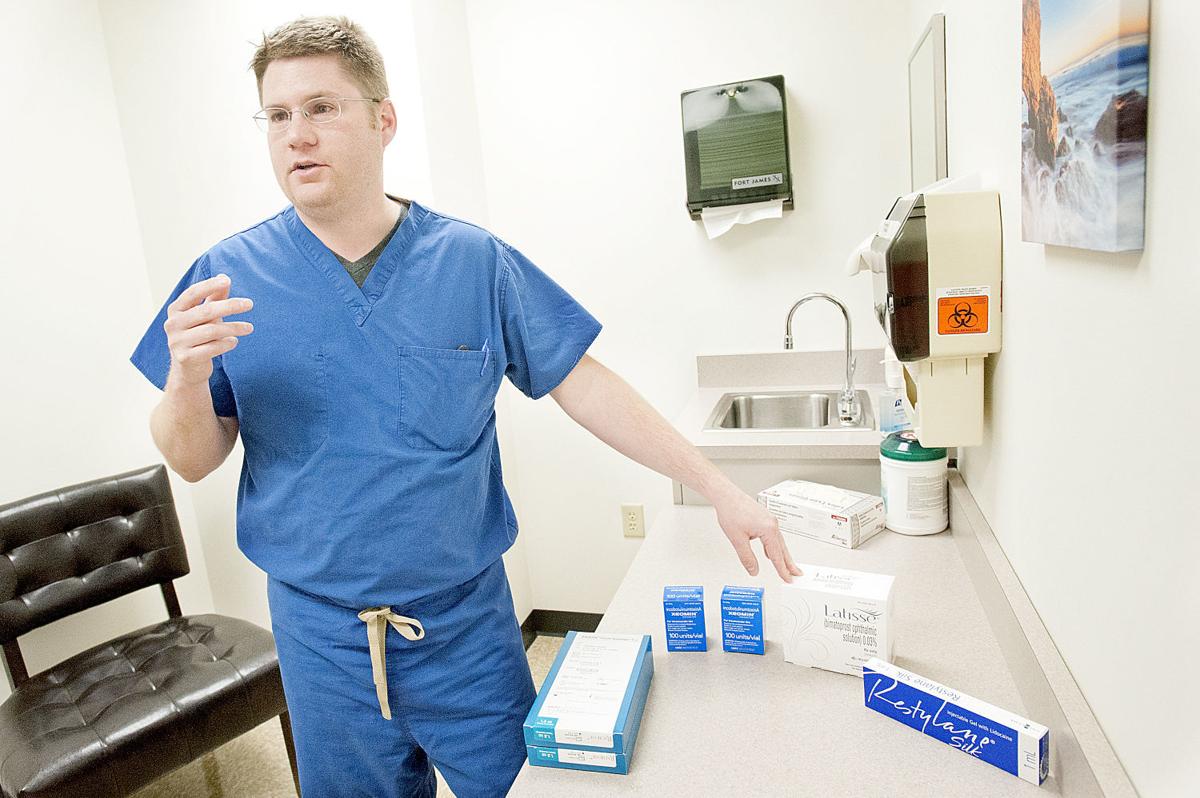 Dr. Adam Smith, a plastic surgeon with Tri-State Specialists in Sioux City, talks about various cosmetic surgery products. The Iowa Board of Medicine has charged Smith with providing inappropriate care to patients. 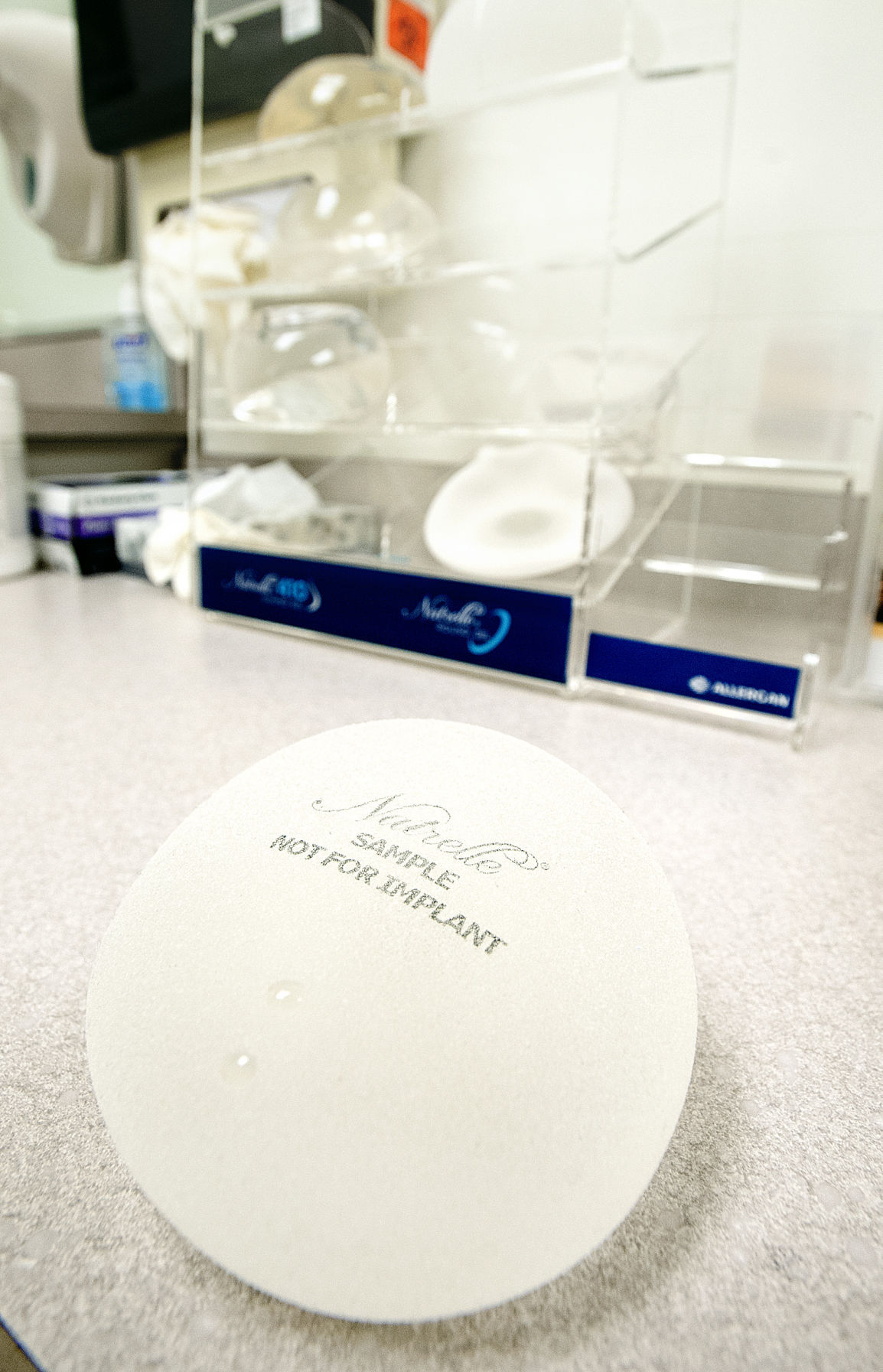 The latest advancement in plastic surgery to hit the market in the past few years is the fifth-generation implant for breast reconstruction and augmentation. 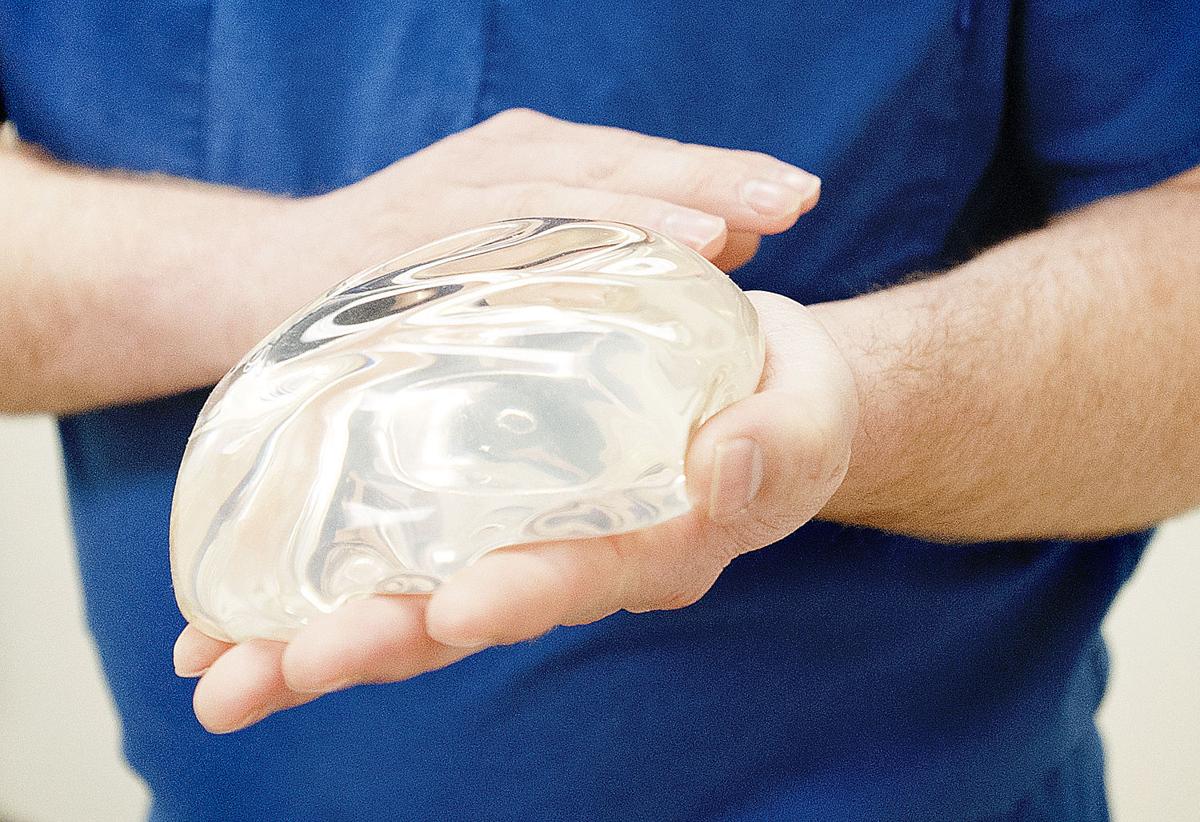 Plastic surgeon Adam Smith holds a breast implant made of a highly cohesive gel that won't leak even if it ruptures. 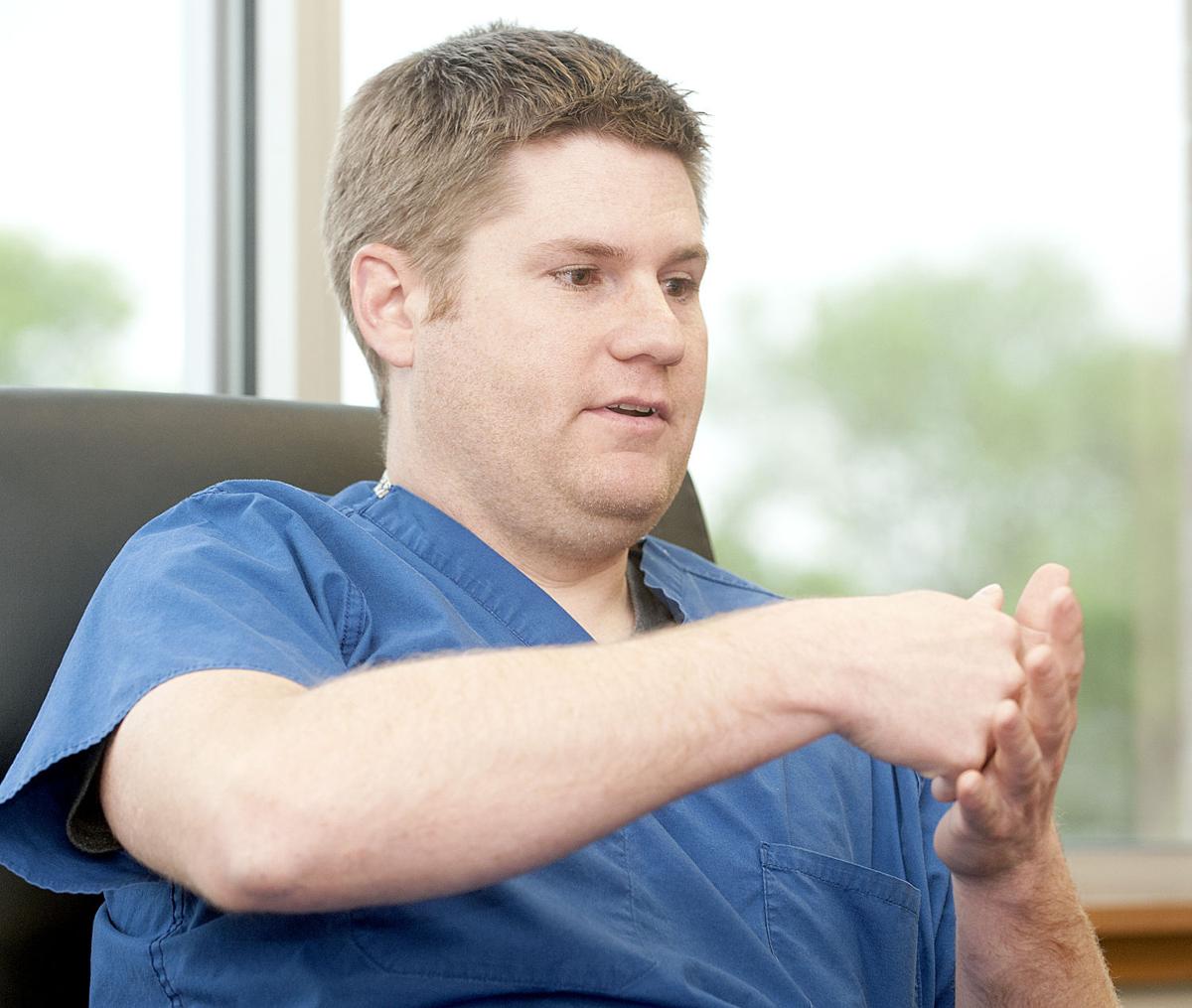 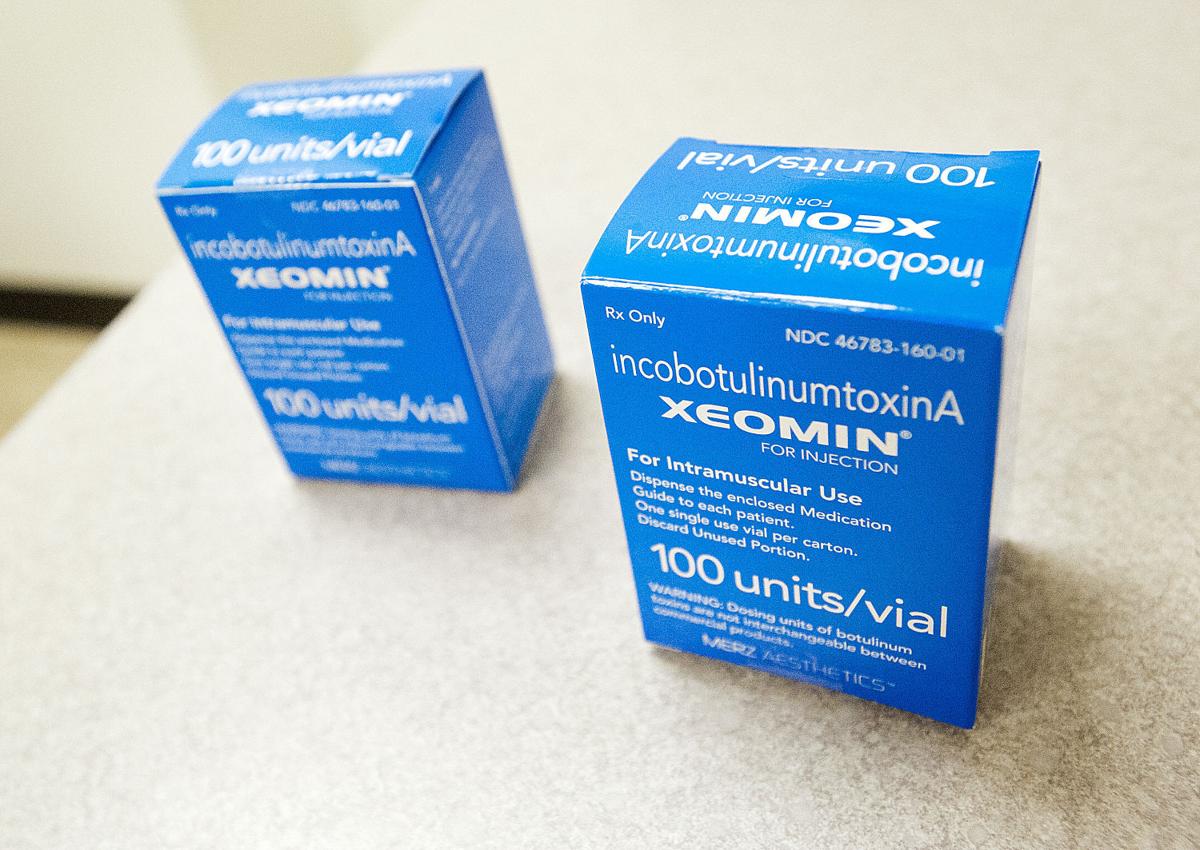 Injectables, such as Xeomin, are used to treat wrinkles and frown lines.

SIOUX CITY | Adam Smith, a plastic surgeon with Tri-State Specialists, has seen his share of plastic surgery nightmares -- patients who traveled to Mexico or Brazil to be shot up with silicone likely purchased at a hardware store.

"I had to remove most of her upper lip," he said of one woman whose tissue had become hard and weeping.

Siouxlanders are participating in medical tourism both abroad and in the United States hoping to save money on cosmetic procedures. Smith ends up repairing these cosmetic disasters, sometimes at no cost to the patient.

Three weeks ago, he examined a woman who went to Mexico for a tummy tuck and breast augmentation. The procedure that left her with nothing but complications cost her around $8,000 including airfare and hotel accommodation. Smith said she could have had the breast augmentation done at a Sioux City hospital with a board-certified plastic surgeon and anesthesiologist for $4,000.

Patients need to look for providers certified by the American Board of Plastic Surgery, he said. Otherwise, he said they're "rolling the dice."

Smith, who grew up in rural Ohio, is the only plastic surgeon practicing in Sioux City. Before arriving a year ago, he spent three years in private practice in Traverse City, Mich.

"A lot of times (patients) will go to Miami or Phoenix where there's a supersaturation of the market of people in cosmetic surgery and they're just doing things that are way, way out of the scope of what anybody would consider right practice," he said.

According to the American Society of Plastic Surgeons, an organization that comprises 94 percent of all board-certified plastic surgeons in the U.S., 15.6 million cosmetic procedures were performed in the U.S. in 2014, up 3 percent from 2013.

Smith said it's not uncommon for women age 25 to 35 to come to his office on UnityPoint Health -- St. Luke's campus to inquire about buttock augmentation, a procedure associated with a high rate of complication.

A buttock lift, Smith said, is a better option for middle-aged women experiencing sagging. Any lift procedure involves cutting the skin, tightening the tissue's underlying structural support and pulling the skin tight so it's nice and flat.

"For that population there are some good procedures that work really well for that," he said. "Augmentation's probably not the greatest plan, but bringing things back up to where they once were is a little bit easier thing to do."

There are no "miracle cures" when it comes to fat and flab, according to Smith.

A new drug recently approved by the Food and Drug Administration to eliminate neck fat or the double chin probably isn't all it's cracked up to be, he said.

"If we actually had an injectable product that would dissolve fat and make your body get rid of it, you'd be a billionaire. You'd own the island of Corsica. It doesn't happen," he said.

According to the FDA, Kybella, a cytolytic drug, destroys fat cells when properly injected into fat below the chin. The FDA warns that Kybella can also destroy other types of cells, such as skin cells, if inadvertently injected into the skin.

Smith said the most exciting advancement in plastic surgery to hit the market in the past few years is the fifth-generation silicone implant for breast reconstruction and augmentation. These implants made of highly cohesive gel won't leak even if they rupture, he said.

"They are shaped so they provide a much more natural contour, which is paramount for the breast (reconstruction) patients," he said. "If they have no breast tissue, instead of having a very obvious breast augmentation, it becomes a more natural look."

Autologous fat grafting, taking fat from one part of the body and putting it in another, is popular in places like Los Angeles, especially among young male professionals. Smith said he doesn't expect that trend to take off in Sioux City for another eight years or so.

"Probably the biggest area of utilization in my practice and many others is facial fat grafting," he said. "You take fat from some point on your body, generally your abdomen and your thighs. You separate that fat out, so you basically get the fat cells themselves and then you re-inject that into the face through very small needles or cannulas."

The injected fat grows on the face, rejuvenating the skin. Unlike hyaluronic acid and hydroxyapatite, this natural alternative is permanent.

Autologous fat grafting is more expensive than getting a filler, and the results, according to Smith, are less predictable.

"It's a very useful adjunct for people who say, 'I like the filler but I don't want to have to keep coming in every single year to get it for the rest of my life,'" he said.

Autologous fat grafting is also being used in place of breast implants, but Smith said there are drawbacks. Patients can expect to only go up one cup size and can develop calcification in their breast tissue, he said.

"That's what they look for on mammograms when they look for cancer, so that's a problem," he said. "That's really why it hasn't gained widespread acceptance outside of eccentric groups on the coasts."

In Brazil, surgeons are sucking fat from patients stomachs and injecting it into their backsides. Dubbed the "Brazilian butt lift," Smith said the procedure definitely will increase the size of one's derriere, but the fat cells won't survive. He's had to fix four botched butt lifts in the past five years.

"The more fat you put in, the less blood supply that will be able to get to the center, so you'll have this nice rim of living fat around what you injected and then you'll have this big giant pack of dead fat straight in the middle of it," he said. "It's nasty! You end up flatter than you were before."

After surgery, there's plenty of cleaning to do

Shelly Anderson's face beamed, like a kid in a candy store, as she stepped from cream to gray tile flooring in St. Luke's Regional Medical Cen…

SIOUX CITY | Thousands of miles, one week and 158 futures were transformed by a team of dedicated medical missionaries, including one Siouxlan…

DES MOINES -- A Sioux City plastic surgeon has been charged by a state board with professional incompetency. He is accused of providing inappr…

Dr. Adam Smith, a plastic surgeon with Tri-State Specialists in Sioux City, talks about various cosmetic surgery products. The Iowa Board of Medicine has charged Smith with providing inappropriate care to patients.

The latest advancement in plastic surgery to hit the market in the past few years is the fifth-generation implant for breast reconstruction and augmentation.

Plastic surgeon Adam Smith holds a breast implant made of a highly cohesive gel that won't leak even if it ruptures.

Injectables, such as Xeomin, are used to treat wrinkles and frown lines.